You are using an out of date browser. It may not display this or other websites correctly.
You should upgrade or use an alternative browser.
L

Ended up going to Parvin S.P. and the turnout was good. Got about a three hour kayak paddle in beforehand. Perfect temperature but high winds made the lake very choppy! It was like kayaking in the ocean.

How did it go? I passed by around 3:30 PM and the "tower" rd was lined both sides with cars. Appeared to be a good turn out.
L

We got 40 people at Warren Grove R.A. (They upped the limit from 25, and were turning away people after they reached 40.) We made it through a lot of wet spots, flooding, mud, but even though the hike leader walked the path Monday, Monday night's heavy rain meant there was one newly flooded section we could not get through. We took an alternate route, made it to the top of the hill, and made it back. Nobody fell in, which was good, but nobody came back mud-free either.

There was also some drama with an 'event' nearby involving 'unconventional' vehicles. You weren't part of that, were you?

lj762 said:
There was also some drama with an 'event' nearby involving 'unconventional' vehicles. You weren't part of that, were you?
Click to expand...

Glad to hear all went well. Wet everywhere is putting it mildly, LOL.
I just happened to be driving by in my van at the time. I know the area, the hill and how wet it is in there. I have no doubt you and the hike leader know much more details of the area, all I'm saying is I'm familiar with the general area.
L

No, I've never been there before. ("Little Pine Plains" I think they call it.) It's an interesting place but yes it was too wet. Also there were a lot of people on this hike. Some folks think it was too many - one quit before we got started when she saw the crowd size, and others were just unhappy the whole way. In many places we were spread out single file, and then had to wait until the slow-pokes at the end caught up. But I had a good time.

The hike leader talked a bit about the Keith Line and its history, and we were walking part of the way along it.

lj762 said:
We got 40 people at Warren Grove R.A. (They upped the limit from 25, and were turning away people after they reached 40.)...There was also some drama with an 'event' nearby involving 'unconventional' vehicles. You weren't part of that, were you?
Click to expand...

What was the drama with the unconventional vehicles?

I've never been on an organized hike, but I would agree you had way to many. I realize it's hard to say no to folks when the size limit has been reached. Perhaps the "best" way would have been to schedule another hike another day? Is the Keith Line the East/West Jersey line?
You know I actually thought about showing up for the hike since it was short and probably interesting to learn more about the area. Now I'm glad I didn't. LOL
L

The Keith Line (wikipedia) was surveyed in 1686. In our area it is part of the boundary of Ocean and Burlington counties, including one side of that weird pointy tip of Little Egg Harbor Twp.

I heard that the Atsion hike, run by Outdoor Club of South Jersey (OCSJ), usually gets around 100 people.

Here's a few of our group hiking down the hill. (It was nice and dry on the hill.) And yes, even though it was nearly 60 degrees, many of us had hoods up or hats. It was windy. Of course, one guy showed up wearing shorts. 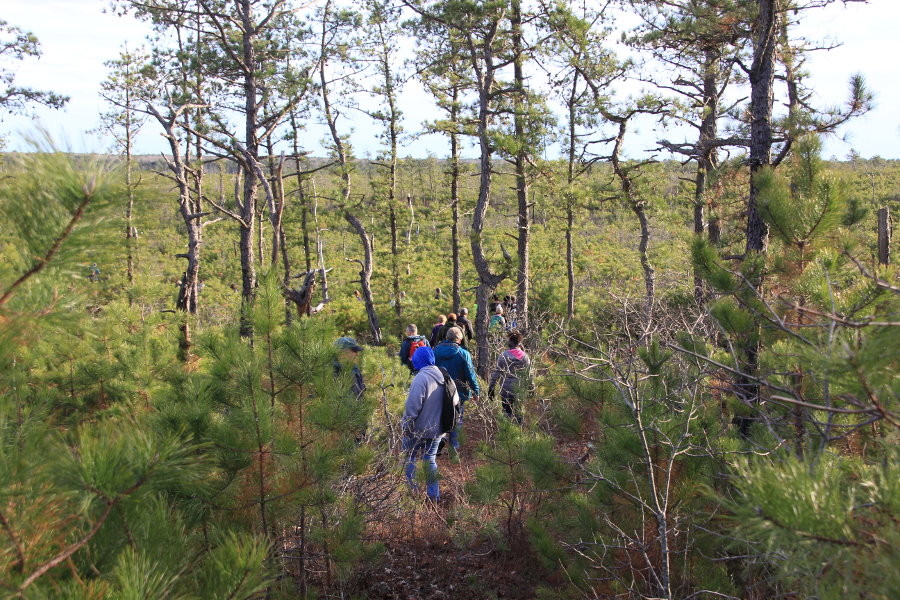 bobpbx said:
What was the drama with the unconventional vehicles?
Click to expand...

Dual-sport motor bikes, some with visible license plates but some without, driving by or transported on trailers; 'monster' trucks - those things with the huge tires; 'quads' or ATVs, some driving on the road and some on trailers, pickup trucks loaded with wood pallets (haven't figured that one out - someone thought they were going to burn them in a bonfire?)... stuff like that. It was like a parade, but without balloons, went on for a while. I don't know where they went or what they did, but I think State Park Police took interest.
You must log in or register to reply here.
Share:
Facebook Twitter Reddit Pinterest Tumblr Email Share Link
Top