Interesting because this happened last spring also. As I was checking into the camping area at the office, the woman at the counter was on the radio with the park police. She told me a swan actually attacked a kayaker but she suspected that the kayaker was disturbing the swan, as an attack by the bird for no reason was unusual. Either they got a grumpy bird, or novice kayakers should learn to respect the wildlife

I was paddling down the Mullica when I came close to a Canadian goose sitting on a nest. It got really aggressive, hissed at me and would not yield any ground. I did not expect it to but they usually are passive. I had no choice but to pass it as I was going down stream.
L

A Canada goose (male) will defend a nest with a female sitting on eggs. They will strut right at you, hissing. It's sort of comical, but always best to keep your distance from anything near a nest. Yes they are otherwise passive. If they are bunched up on a trail, I usually just walk very slowly towards them, and they move away. (Watch where you step, though - yuk.)

Swans on the other hand seem to be always mean. I watched this mute swan chase two Canada geese on a pond for no reason at all. I thought Canada geese were pretty big, but when the swan closed in on them you can see how much bigger it is. A real bully. 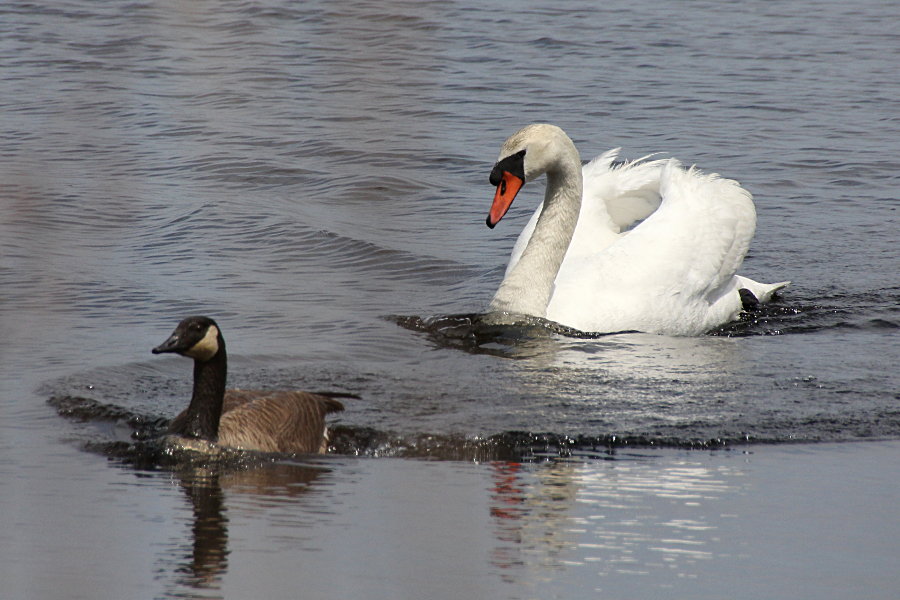 I have a friend who's 6'4 and that swan snuck up behind him while he was fishing from a kayak on Parvin's and grabbed a hold of his arm and capsized his kayak. I told him to string razor wire around his kayak the next time he fishes there.

I'm very surprised to hear that that swan attacked somebody in February though. Falling into 40 degree water is a serious, life threatening situation. I paddle lakes that have as many as ten swans on them, and in the fall and winter I can't get within a hundred yards of them before they fly away.

A bite would leave a nice mark, maybe take out a chunk.

Domestic Geese are just as bad, maybe worse, but not as big.

Yea I've come across these particular swans while kayaking at Parvins. Its best to steer clear and if they make an attempt to come towards me I usually bang my paddle against the kayak and leave. That water does get cold right now, but it's been real busy over at Parvins I'm sure someone saw it go down. Interesting that one of them had the 'yak out for the first time. What a story that'll make
T

Seems like kayakers have encounters with angry birds (sic). I have a Jon Boat with a pedestal seat mounted on the boat seat, so I sit high in it. I've never had any trouble in the boat or even on foot with any swans, geese, or otherwise. Maybe I look more threatening to a bird than someone sitting low in a kayak? Could it be your profile on the water? IDK
You must log in or register to reply here.
Share:
Facebook Twitter Reddit Pinterest Tumblr Email Share Link
Top