Deadline extended on the survey 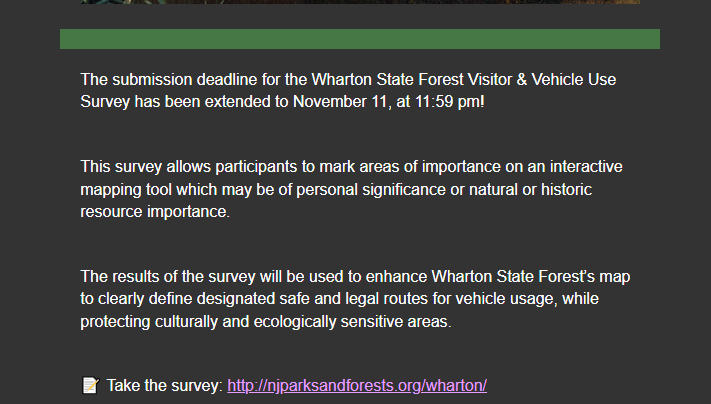 This is what Fix Our Parks sent out to have their members cut and paste into the Survey.
They also attached a .kmz file with large areas around Friendship and Quaker Bridge for "walking and nonmotorized vehicles only."
I can't attach the kmz file but I have shared it here:
the kmz file

All orgs use the "suggested comment" stuff but this is what ticked me off: they suggest using different computers to essentially stuff the ballot box:

Note: If you have already taken this survey, you could forward this to a friend or family member on a different workstation. The survey will not let you fill it out again on the same device/IP address.
Click to expand...

Here is the cut & paste they want sent. $17 isn't much, but it opens things up to keep people out. This is essentially a beach pass for all state recreational areas for them to keep people out. We already pay for this and don't need a sticker so they can snitch on people who don't have one.

"I enjoy exploring a variety of dirt roads shown on the topographic maps as depicted by the U.S. Geological Survey and use them for sightseeing, accessing specific wildlife areas, paddling, and hiking. However, there are also destructive activities occurring in these same areas such as illegal dumping, poaching, illegal off-road vehicle use, and illegal fires that cause immense damage to natural habitats, historic sites, designated trails, and even the road infrastructure itself. Travel Management Plans have been required by law on federal lands open to the public since 1979 and it is long overdue for the State of New Jersey to catch up to the federal standard.

I am asking for strict, effective, and steadfast enforcement of existing federal and state regulations. We also need more officers patrolling more areas more often. Warnings should never be issued for illegal off-road vehicle use. The corps of Conservation Officers should be expanded greatly and given the direction to patrol the backcountry in state park areas as well as wildlife management areas. We need effective enforcement.

We need better communications with the public and more front-facing employees like visitor services naturalists and maintenance workers. Naturalists and maintenance workers are not being paid enough to build their lives and will not be able to effectively perform this critical task without proper compensation and full-time employment. We need to compensate these professionals better for their critically important work.

Permits for accessing state lands should be low-cost and cover a broad range of activities. Michigan State Parks has a form of this approach called a “recreation passport” that could be a model for New Jersey. For just $17 a year, one receives a license plate sticker that authorizes access to a variety of state-owned lands and facilities such as camping areas, swimming areas, boat launches, state forest dirt roads, hiking trails, and historic sites."
Click to expand...

"Michigan State Parks has a form of this approach called a “recreation passport” that could be a model for New Jersey. For just $17 a year, one receives a license plate sticker that authorizes access to a variety of state-owned lands and facilities"

Seems like apples and oranges here. Michigan is about 8x the size of New Jersey (56,500 vs 7,300 square miles) and I wouldn't be surprised if the amount of openspace is an even a greater ratio. And our populations are similar in size (10 million for MI, 9 for NJ) so each Michigan resident has access to a lot more openspace. Based on access to public resources, a NJ permit should only be about $2.

Regardless, the whole thing is a terrible idea and I'm disappointed to see "Fix our Parks" take this position.
Last edited: Oct 28, 2022
Reactions: TommyP, smoke_jumper, this_is_nascar and 1 other person

It’s an old article but it gives you an idea of the Michigan permit system. It is like comparing apples and oranges since this system is for the entire state of Michigan compared to one state park in NJ. 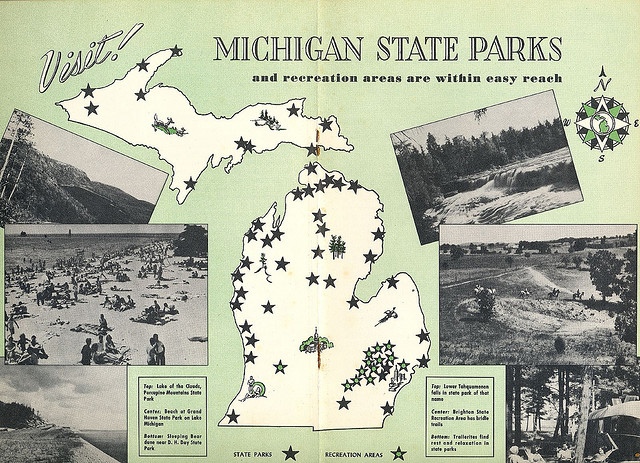 Michigan residents are paying less for yearly passes to state parks but the program has generated more funds than in prior years. Michigan Recreation Passports, available at the Secretary of State for the past year, now allow almost 2 million vehicles access to all Michigan state parks.

They want to make this apply to everything, which is egregious overreach. People are going to get tickets for driving to parks that used to be free. It's gentrifying the forest, they want to keep people out.

What about my senior park pass?
Reactions: Broke Jeep Joe

I heard that Shamong has come out against the plan like Waterford. Does anyone know if this is true?

BeachandBarrens said:
I heard that Shamong has come out against the plan like Waterford. Does anyone know if this is true?
Click to expand...

Yes, this true. So far, Shamong, Waterford and Mullica passed resolutions against the State’s plans.
Reactions: pinelandpaddler, TommyP, BeachandBarrens and 1 other person

I was at the Waterford township meeting last night and was very happy with what I was hearing from the council. They are fully on the side of those against the permit. They offered suggestions and support and genuinely were sympathetic to the cause.
Reactions: TommyP, enormiss, BeachandBarrens and 2 others

From the article that Guy linked to here

...after being presented with the comments of the township committee members and asked for a response, Shinske pointed out that the NJDEP “plans to host” a “virtual stakeholder meeting” in early 2023, which she said will “present a summary of information gathered through the Wharton State Forest Visitor and Vehicle Use Survey.” In August, the NJDEP had teased such a meeting in its release. “At this meeting, there will be a public comment period where residents may make further comments regarding visitor and vehicle access in Wharton State Forest,” Shinske maintained. “The date of this upcoming meeting is to be determined.”

Some people say they edited or ignored their comments in the first virtual meeting.