So I went looking for these things:

And I found this thing:

He was hugging the road - smelling for nests to raid. Between these guys, raccoons, cats, and coyotes, its a wonder there are any turtles left.

Don't be too hard on them, though. They don't exactly have it easy, either.

very nice pictures of the fox

Whoa, will you look at all those ticks?! Holy crap! Poor guy.

He needs a vet. Nice photo's, especially of the turtle.

Nice shots Bob. I don't know if you were at Island beach or not. I noticed the foxes there have little trepedation about going about there business in close proximity to people. Even, sadly, approaching cars from time to time.

I've been told that the fox population at island beach recently became extirpated. am I wrong?

Why would they do that?

I keep looking at those photos. He is so emaciated, and this is a time of abundant food for them. I wonder if a tick-borne disease is responsible for his skinny physique?

Bobbleton said:
I've been told that the fox population at island beach recently became extirpated. am I wrong?
Click to expand...

Several years ago I noticed that there weren't any foxes around on IBSP. When I asked about it at the bait shop they said nearly the entire population was wiped out by sarcoptic mange. Last month my niece spent a couple days there and said she saw some, so it looks like their making a comeback. They are very good at sitting by the roadside looking pitiful for a free handout.

I lived fifteen minutes from Island Beach back in the 1980s and used to surf fish there quite a bit. One time I heard rustling behind me while standing at water's edge and I turned just in time to watch a fox grab my bag of frozen mullet and run off into the dunes with it. Back out to Betty and Nick's for another bag! Not too long after that the mange problem hit and the fox population crashed.

The foxes aren't a particularly good thing in the coastal areas anyway. Aside from eating terrapin eggs and young, they are major predators of beach nesting birds, such as the very endangered Piping Plover. Their impact can be so great that they have been trapped to remove populations on some of the isolated and uninhabited islands that are part of the Forsythe Refuge further to the south.

It's also believed that the Red Foxes in most of our region were introduced by the Europeans for hunting purposes. There is a race or subspecies of Red Fox native to North America but its range was limited to the more mountainous areas inland and has since been largely replaced by the introduced population.

sue gremlin said:
I keep looking at those photos. He is so emaciated, and this is a time of abundant food for them. I wonder if a tick-borne disease is responsible for his skinny physique?
Click to expand...

What makes you believe the little fellow to be emaciated?

infinite sameness said:
What makes you believe the little fellow to be emaciated?
Click to expand...

He looks very thin to me. You can see his elbones really well, his hip bones show a bit on top, and his belly has a tucked up appearance. It's hard to see through his dull fur, but his butt sort of comes to a point instead of being round. He just has the appearance of a dog in bad condition.

Compare him to the fox in this photo and you'll see what I mean. 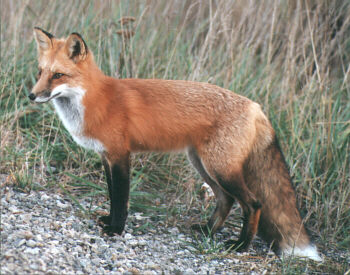