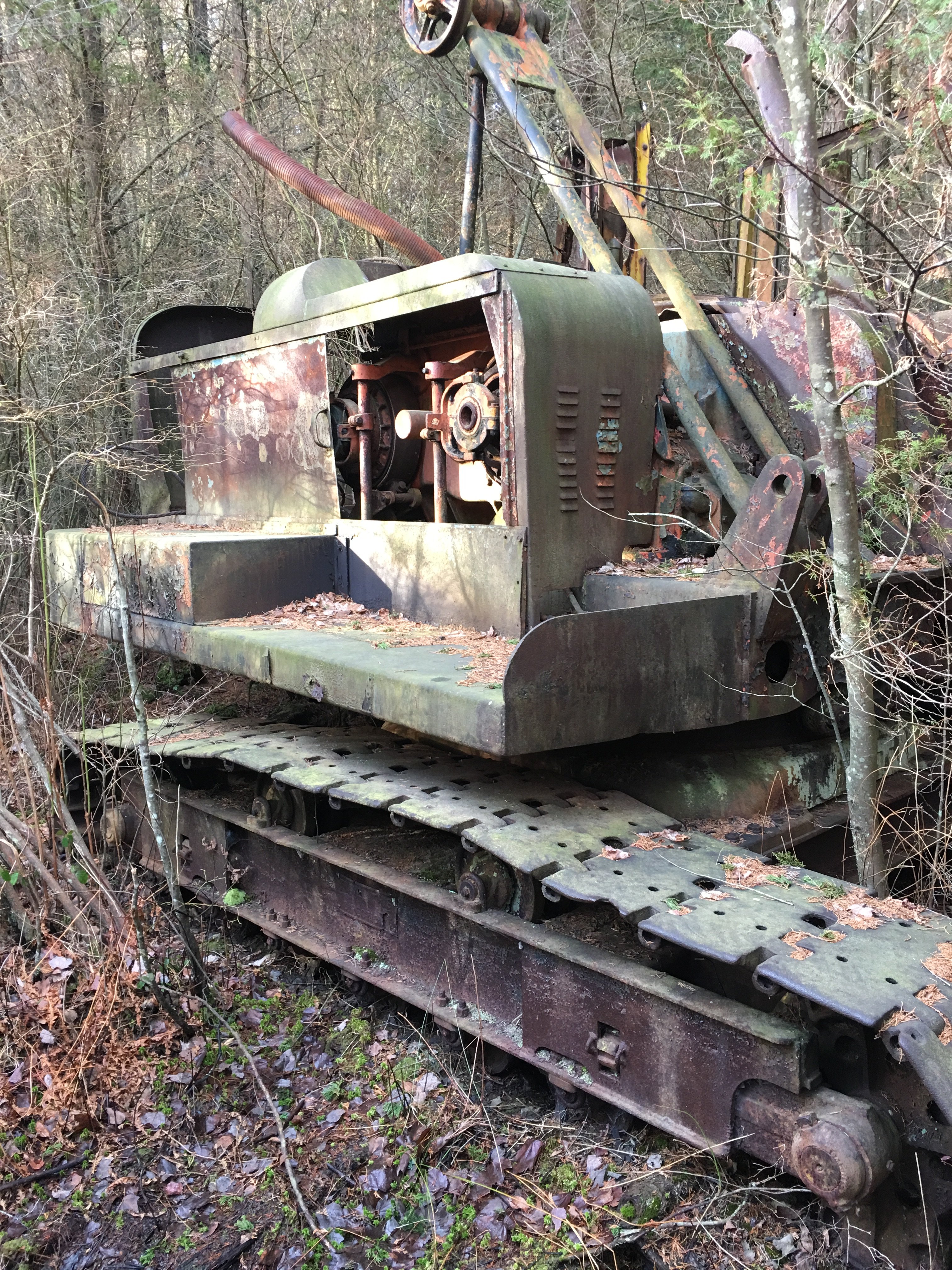 And not going anywhere soon.
Reactions: Ben Ruset, Diablo2424, slingblade and 5 others

I was there on Saturday. The final leg of the trail leading to it is barely perceptible now.
One of this site's members used to maintain a Geocache there but since the location doesn't meet any of the State's new rules for setting a cache, it has been delisted. I would imagine the owner delisted it since the Geocaching website still publishes the coordinates for all of the "illegal" caches that are still out there.

That area is wild and beautiful.

I never found it.

noboat said:
I never found it.
Click to expand...

It ain't as easy as it used to be that's for sure.

When I took people there and we got close I would send them ahead and let them have the fun of discovery. They would look and look and finally realize IT was looking at them. 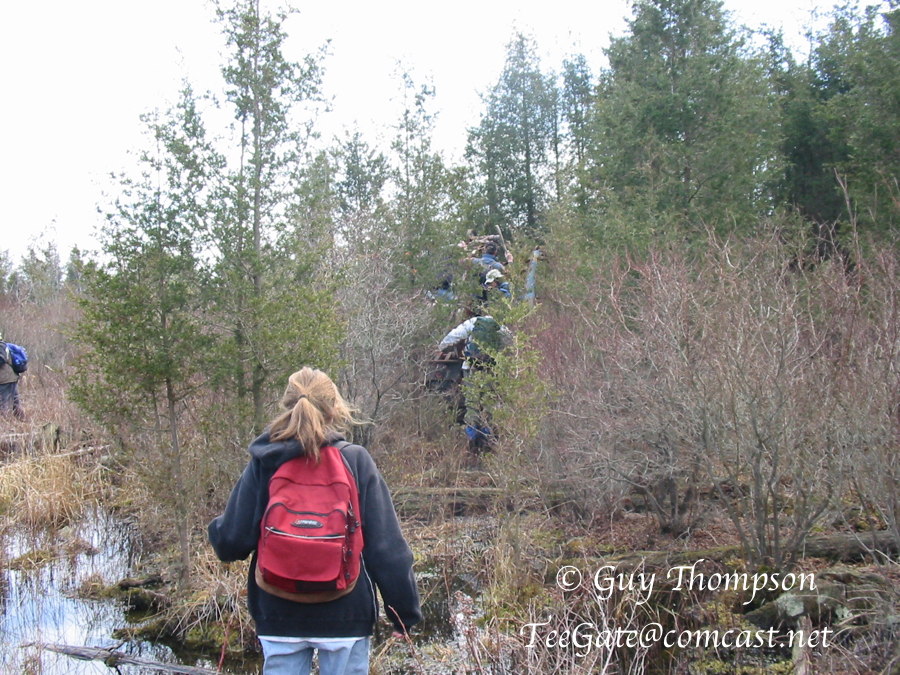 Wow ! What a difference Guy.
Except for the area where I stood to take the picture, it is a complete jungle. When we turned to leave it took us a few minutes to backtrack our bootprints and get back to the corduroy.

Last time I was there you could still smell diesel as you approached it.That stuff is like creosote,it's forever.

Where is this? I didn't see geo-tagging on the image...

It's not easy to get to the general area or find the Swamp Monster. I no longer have an exact lat/lon in my handheld for it but the following two maps below will get you to it.

You will absolutely need 4WD to get to the parking spot. Two weeks ago we went through two water filled truck eaters in my buddy's F350 and they were pretty nasty. He has a plow bracket and it was an issue for us. After this snow and melt afterwards, I would give it a few weeks.
From the parking spot I ask that you walk in the rest of the way. The area leading north is very wet and environmentally sensitive. You will need knee high rubber boots for the last hundred yards or so.

To bring the new members up to speed here is old info I came up with from the past as well as an article about the logging that occurred there. The article is from the Batsto Citizens Gazette and they mention that all articles can be freely used as long as credit is given.


First, I sent this to the PBX members who visited it with me a few days after back in 2004.

Those members who have visited the Swamp Monster may be interested in
some information I have dug up on that particular piece of equipment and
other pertinent info on it.


The Swamp Monster was manufactured by the "Unit" Crane and Shovel
Corporation of Waukesha (Milwaukee) Wisconsin, with offices or
manufacturing plants in other cities. They produced several different
models with different attachments on each one. Some were shovels, some
were cranes, and there is an attachment with a magnet to move around
scrap metal. So which particular model is ours?

In order to find that out, I took a photo of the serial number on a
recent visit there, and started asking questions. Here is what I have found.

Up until 1946, Unit used a common number system for all of their
equipment, with the last piece made that year being serial number 2663.

In 1947 they started using the last two digits of the year of completion
as the serial number prefix, which then would be followed by the
quantity number of the piece made to date.

So given that number is 51802, we now know that it was produced in 1951.
I also learned that more than likely, it was built in November or
December of that year because the 802 is slightly less than the machines
built that year. I have not found out how many were actually built that
year.

I also learned that the two model numbers were the 514 and the 614, but
I have not learned as of yet how that is determined. But from the
photo's I have of it there is a clear consensus that it is a 614 which
has a capacity of 5/8 of a yard. I would then assume that the 514 was
the smaller one, with a capacity of 1/2 yards, and the size determines
the model.

Most of these units had the cab set a few feet above the deck gear hood
which made for good visibility.

And a while later I learned this from a member of this site.


Regarding that fire, it looks to have been relatively isolated and un-newsworthy. Any fire that even remotely makes the news gets a name. This one didn't. Looks like it started July 17, 1977 and was not officially out until the 6th of September. This is somewhat common in swamps, to take so long to put out, and a reason fire wardens try to avoid it (both the expense and the need to have guys and equipment endlessly babysitting a smoldering swamp while another fire elsewhere could require manpower...a real pain when it gets down into swamps). The total fire size was 647 acres, with the harvest area being in the middle and smaller than the total fire size. Cause of fire was incendiary - no other notes.


It was decided by the state to try and salvage the cedar but after waiting until 1979 some was not recoverable. In any event, the Batsto Citizens Gazette ran an article about the recovery of the wood.

Scott I"d say your close but I think it's right here http://maps.njpinebarrens.com/#lat=39.67385450903439&lng=-74.68526813786508&z=19&type=nj2012&gpx= as you approach it it is in the area of small young cedars but right on the edge of the larger ,older cedars and tucked back in the corner.As you approach in the young cedars look toward the skyline for the bigger cedars joining in an L shaped 90 degree corner and the monster is just north of the corner on the edge of the big cedars.You'll literally be within a few yards of it when you see it.
Reactions: Diablo2424

manumuskin said:
Scott I"d say your close but I think it's right here http://maps.njpinebarrens.com/#lat=39.67385450903439&lng=-74.68526813786508&z=19&type=nj2012&gpx= as you approach it it is in the area of small young cedars but right on the edge of the larger ,older cedars and tucked back in the corner.As you approach in the young cedars look toward the skyline for the bigger cedars joining in an L shaped 90 degree corner and the monster is just north of the corner on the edge of the big cedars.You'll literally be within a few yards of it when you see it.
Click to expand...

If anyone's going and wants some company im interested...

With all this "snow" you could probably canoe in from 206 today !
Reactions: manumuskin

My son and I tried to find the Swamp Monster on Easter Sunday. I think the problem is we drove in from Rt. 542 > Richards Ave. We made it to the Nescochague Creek, and tried to find a way across. We decided it was swim or turn around. If I do it again I will bring my waterproof backpack. Looking at the instructions above. I am now thinking that Scott may have driven down from Rt. 206, perhaps from West Mill Rd? Any advice, either here or PM would be welcome. The pic is a two knucklehead selfie, trying not to drop my cell phone in the bog (just below the Nescochague). 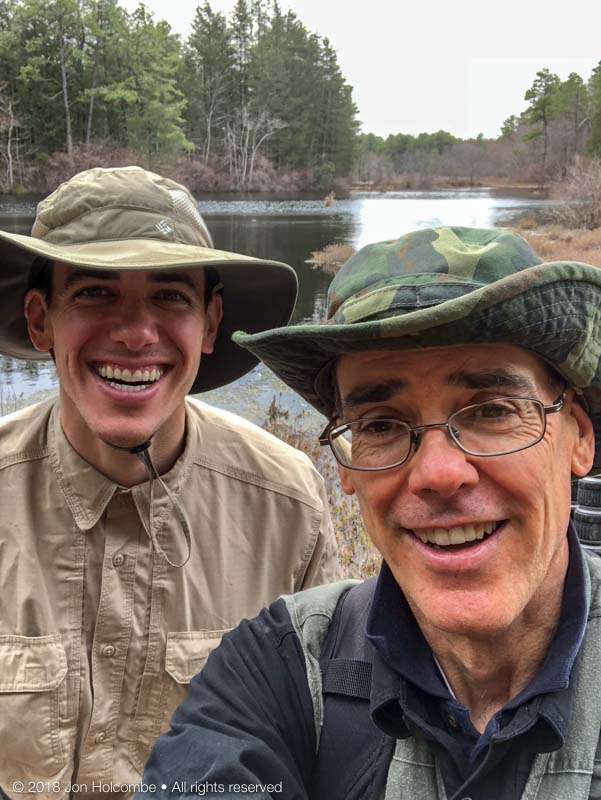 I have been there about 5 times either by walking or driving. The first time was 3/14/04 when the late Bob Bruneau took some of us there. We walked in from the Pleasant Mills Church. It was 8.5 miles roundtrip. 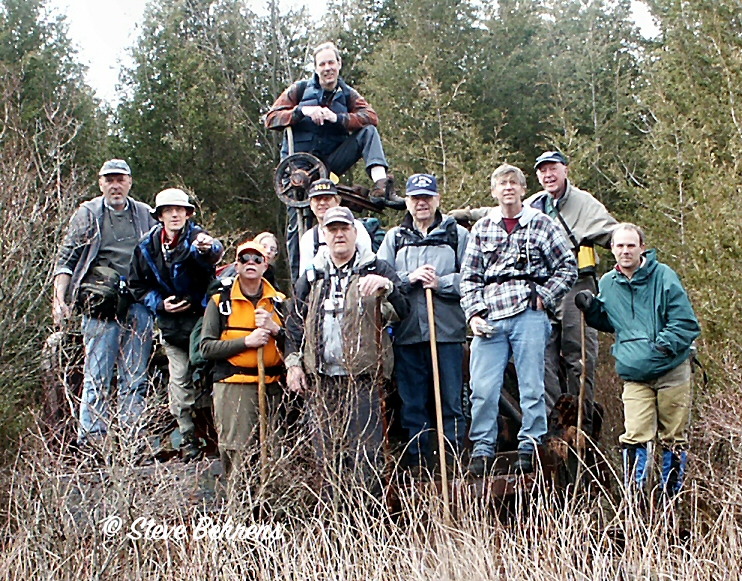 After that I was able to drive close to it in the winter when it was very cold by entering at 206 on West Mill Road which you can't do anymore. 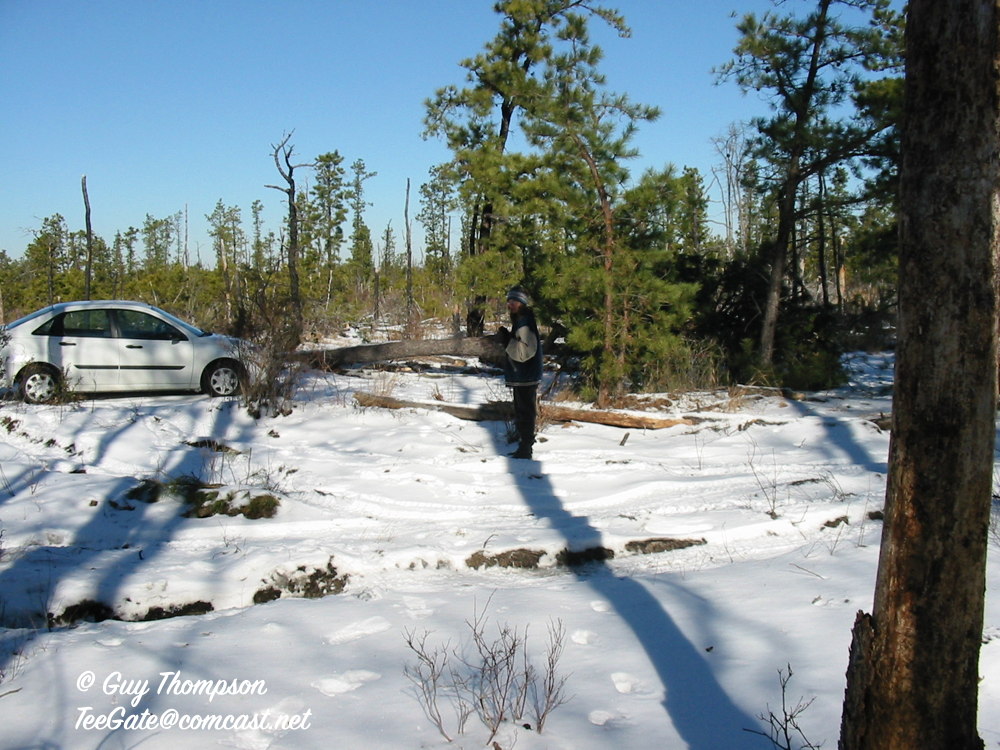 We have crossed the Nescochague on the wooden plank in the past but it appears that is long gone. That was or is here.


I would suggest you with walk in from Pleasant Mills or wait until the water is warmer and wade across the Nescochage at maybe the former location of Ace Campground off of Richards Ave. That may have been where you already were.

Jon I fear you are in for a long walk to access the Swamp Monster. The best way to have drove in went off of 206 here http://maps.njpinebarrens.com/#lat=39.69909116443121&lng=-74.7523166577148&z=14&type=nj2015&gpx= But recently a person who doesn't even own the road has gated it here http://maps.njpinebarrens.com/#lat=39.696977885256054&lng=-74.74493521850582&z=14&type=nj2015&gpx= and this has been a bone of contention on another thread on this forum.You would have to park at the gate and walk from there and as you can see that is several miles each way.You could also access from here http://maps.njpinebarrens.com/#lat=39.64141507278305&lng=-74.66142195861812&z=14&type=nj2015&gpx= but the whiney woman preacher at this church bitched and whined till they closed off the bridge because of traffic noise during church.This bridge has been closed for probably ten years now.You could also access from here http://maps.njpinebarrens.com/#lat=39.707675695670225&lng=-74.74639434020986&z=14&type=nj2015&gpx= But I have heard that once you get past Millers Bogs the road has been closed off????I haven't been down this way in several years but in any case once you get past Rockwwod here http://maps.njpinebarrens.com/#lat=39.69493058435016&lng=-74.71343535583486&z=14&type=nj2015&gpx= This road turns into more of an Evergladed Airboat ride,especially with the water up the way it is you will need a boat.I have driven this road in the midst of a very dry summer and still had to get out and walk thigh deep holes to figure out where the best route to cross was.I made it but it took over an hour to get from one end of the wet section to another.Might as well have walked.I personally would walk in from the Church or Batsto and cross the bridge on the hiking trail.I"d stay on the dry road here and make the right here since the shorter route is also full of big.long deep holes,kinda like walking a stream.You can at least stay dry this way till the last 100 yards or so. Years ago you could have driven to with a couple hundred yards of the Monster but due to whiney preachers and ignoramuses who think they can close down roads that aren;t theirs (and apparently they can) you will now have to make a day of it just to get there and back.
Reactions: Jon Holcombe

Looks like me and Guy were answering at the same time