You are using an out of date browser. It may not display this or other websites correctly.
You should upgrade or use an alternative browser.
L

Does anyone have one of these? Ever use it? Did it work?

"It" is a good-sized Lithium Ion battery pack with electronics and jumper cables. They are made by several different companies, and come in different capacities. Besides being able to jump-start a car, they can recharge devices like phones. I've heard that they work pretty well, except when both the car and the power pack are very cold. They are also a lot smaller and much lighter than the old-style sealed lead acid jump starters.

I recently got one, mainly because places like Penn State Forest make me nervous. I get no cell phone service from the parking area, which is about 3 miles from the nearest major road. Having a dead car battery when on my own there would really be no fun. But in general, I think it would a good thing to keep in the car. Also, mine has safety features to prevent sparking or reverse polarity, which should make it a lot safer than car-to-car jump starting.

(I didn't say the brand/model I got only because I'm not sure it is considered OK here.)

I have a New Trent Powerpack+, bought it quite a few years back. Not used for jump starts, I used it to power stuff like GPS when I had my old Jag. Worked great. Now use it to charge camera batteries in the field. I would imagine the technology has come far since I bought mine, and have been considering the jump start version from NOCO.

I don't see why it would be a problem to mention the brand or post a link, we know you're not a spammer.

I got one of these a number of years ago, it's still up in the attic. IIRC the brand was "Husky". Not sure what the battery technology was, probably not LiON. I used is as a battery power supply for various things - it also had an inverter that provided full AC line power. After a few years the battery died though - wouldn't hold any charge at all. Searching the web, this was common (as is to be expected with any battery powered device) but this particular model was not really built in a way to facilitate changing the battery. Some people managed to do it but said it was difficult. And there was no direct replacement for the original battery although evidently others worked.

Anyway, you might consider how long it will last and whether the battery will be replaceable. Problem is, with an emergency thing like this, the tendency is just to stash it away as a "security blanket" and forget all about it. Then one day when you really need it, turns out the battery is dead.

A few years ago I got another similar gadget, can't remember the brand, but it's a compressor that also has jumper cables. Main reason I got it was for topping off the air in my tires without having to run an extension cord outside for my other small compressor. Unfortunately, it's a really wimpy compressor that takes a long time to top off a tire, and the battery runs down quickly. So, basically a waste of money.

Not quite the same kind of thing, but I now have one of these, it's a really well-made unit and the battery is replaceable. But it's just a portable power supply. https://www.goalzero.com/shop/power-stations/goal-zero-yeti-400-portable-power-station/

They make a lot of cool stuff and you can plug solar panels into their power supplies and even daisy-chain the better ones (like mine). FWIW, they stress that their batteries will last longer if constantly charged - in other words, keep it plugged in all the time while not in use. I believe this is for lead acid batteries though. They make a LiON version of the unit I have, but it costs a lot more. IIRC one advantage is that it recharges faster and has a longer lifespan.
Last edited: Mar 24, 2018
L

I wanted one with a separate 12V charger, rather than charging through USB, and I thought this model had one. But it turned out to mean it came with a 12V adapter for charging from a car's power port. Not what I wanted. Using only what's in the box, there is no way to charge this thing - you need a USB power source.

Good point about battery life. I didn't really think about that. I doubt the battery is replaceable. The battery on my UPS is said to last 3-6 years, but of course that's a different technology - sealed lead acid - and those batteries can be replaced. But I won't be disappointed if the NOCO lasts 6 years.

Everyone probably has access to a calendar application with reminders, and I recommend using it. I expect this power pack to hold its charge 3-6 months or more. So I will put a reminder on my calendar for every 3 months to charge it and put it back in the car.
Last edited: Mar 24, 2018

Good choice, same one I have been thinking about. Have you seen the one they have for RV's, 10L gas or diesel up to 10 times. NOCO were one of the first to come out with those small jump starters. I bought a jump starter years ago that used a traditional battery. Saved my butt several times and still works, which is why I haven't gone to the NOCO. Its just bulky and heavy, made by Schumacher.

If its a piece of equipment you may have to depend on it needs to be maintained or you'd be better prepared without having it. My home generator gets run with a load quarterly and the battery stays on a smart charger.
Last edited: Mar 24, 2018

lj762 said:
I wanted one with a separate 12V charger, rather than charging through USB, and I thought this model had one. But it turned out to mean it came with a 12V adapter for charging from a car's power port. Not what I wanted. Using only what's in the box, there is no way to charge this thing - you need a USB power source.
Click to expand... 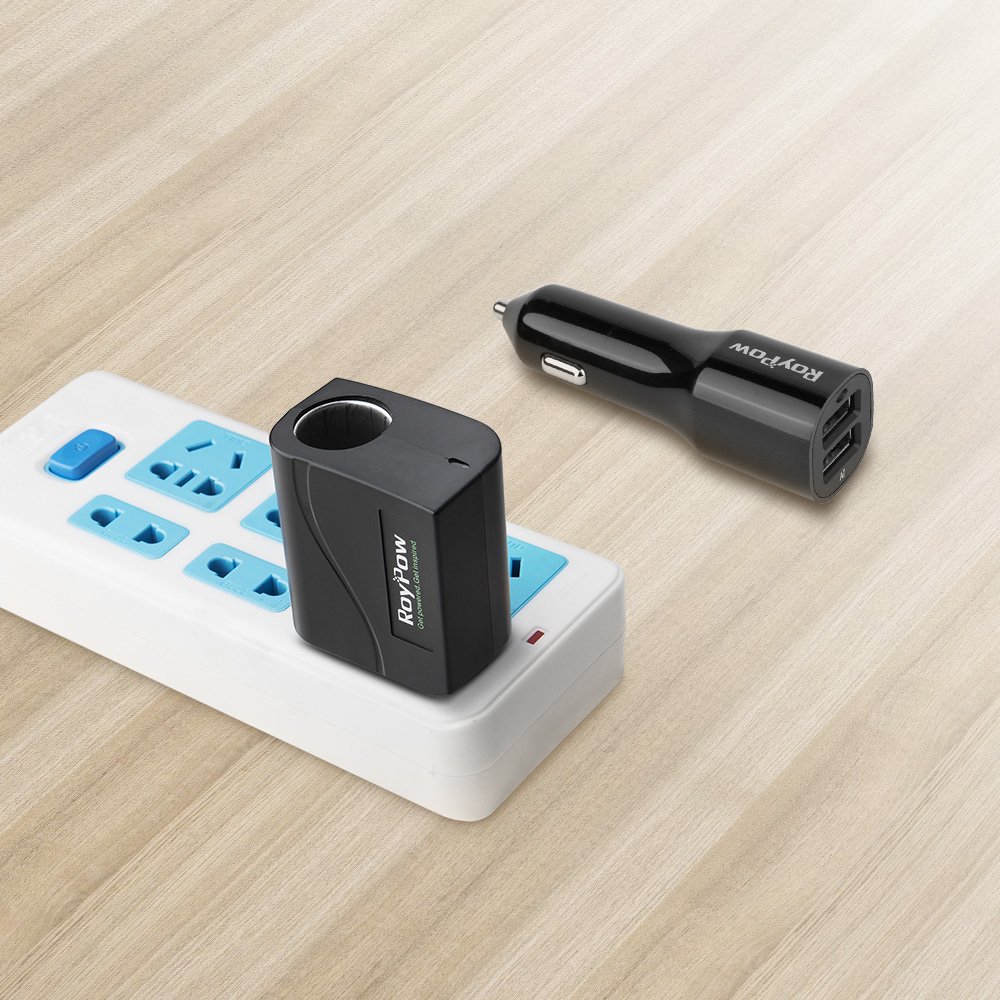 If you get a USB charger for one of these power packs, make sure to check the current output. The GB40 will charge at up to 2.1A. Two USB chargers I have around supply 0.55A (camera) and 0.7A (phone). Although you can charge the power pack with one of those, it will take longer - for example, 12 hours charging time with a 0.5A USB charger.

How often have you been stuck with a dead battery recently? It's been more than 20 years for me, and that was a old battery that I should have replaced anyway. Having my battery die is about the last thing that I worry about with my car, but it's a recent model.

But I was reading an article recently about how the batteries in newer cars can die if you leave them parked for about a week due to all the electronic systems that are always on. So it might be good to have one of those gadgets in the trunk if you leave your car at the airport for a week.

Boyd said:
But I was reading an article recently about how the batteries in newer cars can die if you leave them parked for about a week due to all the electronic systems that are always on.
Click to expand...

There is a reason some car stealerships, our local VW dealer for one, had a solar charger stuck on new car windshields .

VW used to ship cars that way and the buyer gets to keep it; they may still do it.

The times mine died were all my fault

Boyd said:
How often have you been stuck with a dead battery recently?...
Click to expand...

Happened only once, a few years ago, in a store parking lot not far from home, cell phone worked, AAA came out quick. (I didn't actually realize it was the battery.) While I rarely drive through Pinelands areas on sand roads - usually walk - there's still Penn. And no cell service on some of the paved roads I do go on.

As per this thread title, I was hoping to hear a dramatic story of someone driving their 4WD truck or jeep through some remote Pinelands sand roads, dead battery, successful jump-start with the power pack they had handy. Guess not.

On the other hand, I have been asked to jump-start other people's cars from mine several times. I've never seen a car battery blow up from sparking jumper cables, and I don't want to... Next time I will be ready with my "ultra-safe" jump-starter.
Reactions: Boyd

I have one. Bought it at Advance Auto Parts in an emergency situation. I was driving my Jeep Commander with my dual sport motorcycle on a hitch mounted carrier. Stopped for the night. In the morning, Jeep had a dead battery. I offloaded the bike & rode to the nearest store (Advance) & purchased it. It started the Jeeps 4.7L V8.

1st ever time I saw one, I was at work & my company truck had as dead battery. A coworker said "I'll help you, I got this jump starter. He took it from his glovebox & I thought " yeah right" but it started the 4.0 Ford Ranger
Reactions: Boyd

lj762 said:
As per this thread title, I was hoping to hear a dramatic story of someone driving their 4WD truck or jeep through some remote Pinelands sand roads, dead battery, successful jump-start with the power pack they had handy. Guess not.
Click to expand...

May not be dramatic, but I used to travel the dead-end roads into the marsh along the Delaware bayshore on photography trips. I have a habit of leaving the hatch on the suv open, still do. A couple times it killed the battery and the schumaker jump charger got it going. No cell phone then and a long cold walk to anything, rare to see another car. Best $25 bucks I ever spent at the time.