There are 47 Pinelands Villages that encompass ~24,000 acres. With their new inclusion as State Sewer Service Areas, you can expect radical changes to village character.
I don't know much about this sign that just went up, but it is foreboding. 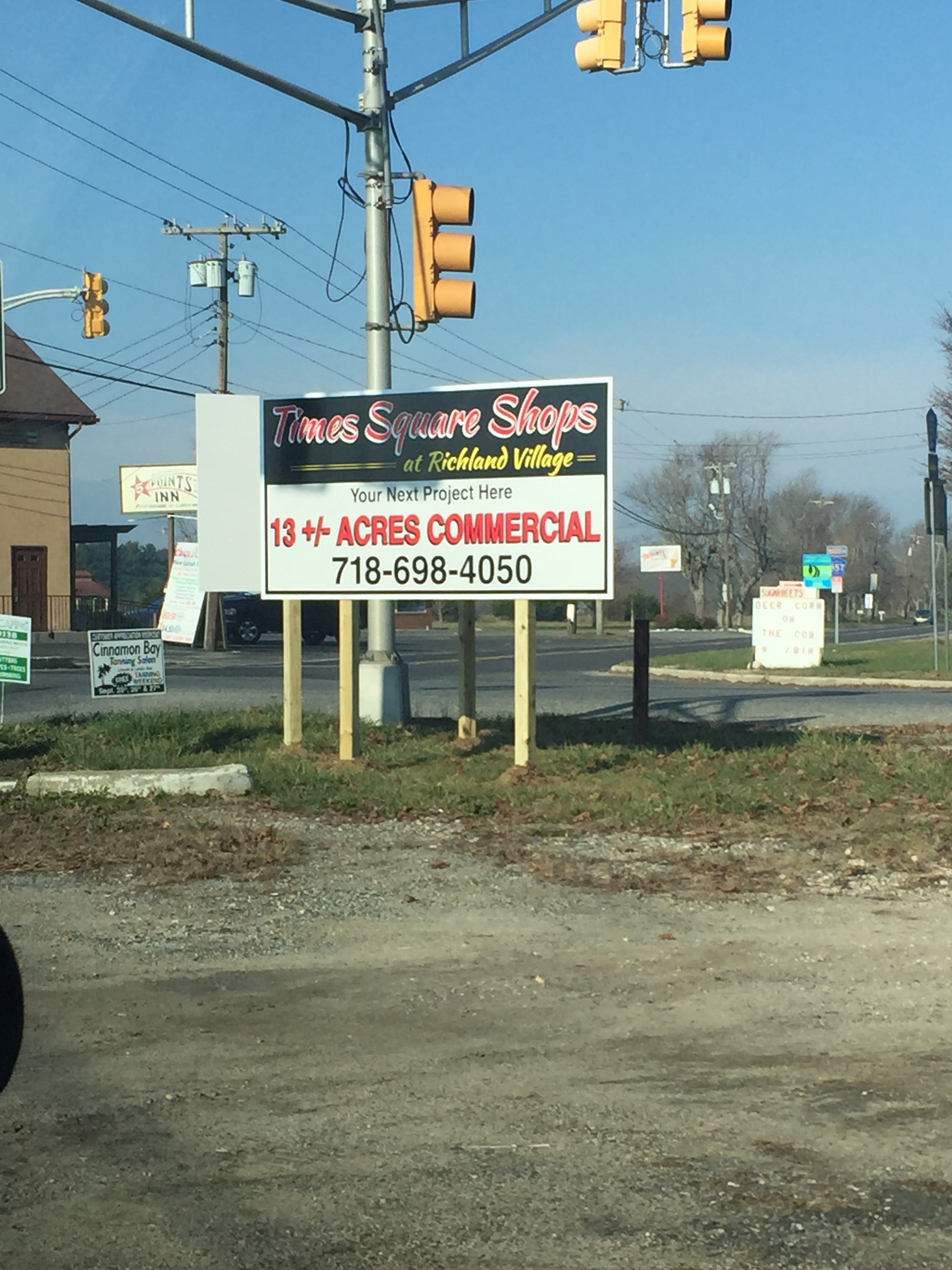 Do you have a source for that edict, or the actual regulation?

Below are excerpts from my recent public testimony for DEP Docket Number 10-15-09, the comment dated November 17, 2015. Water Quality Management Planning is the final step in making Pinelands Villages growth areas. The testimony period has extended to December 28, 2015.

While the Pinelands Commission (PC) and the Office of Planning Advocacy (OPA) contend that Villages were always ‘growth areas’ (see dirctly below 1 & 2), the legal record attests otherwise. By the ruling 1999 MOU, more than half the Pinelands Villages are ‘Hamlets’ and not ‘Villages’ thus not envisioned as centers of place with mandatory sewer service. Hamlets are not Centers of Place. Villages may or may not be Centers of Place. By 1999 MOU it's up to the municipality to decide. Some communities may to correspond to Regional Growth Areas, but not all must correspond to Regional Growth Areas.

Both OPA and PC cite as required the 1999 MOA as their enabling document, but their interpretation is unsound. For the NJ DEP’s instruction here is the OPA (1) and PC (2) Pinelands Village growth area correlation rationale.

Both OPA and PC cite the 1999 MOA. Both OPA and PC correlate all Pinelands Towns and Villages to "Centers" based on the 1999 MOU. The PC specifically states that the MOU recognizes Pinelands Villages as "described in Appendices B and C of this MOA." By that metric places like Newtonville and Milmay are not considered Villages. They are agreed to be Hamlets, therefore, as agreed, are not Centers of Place, and thus are not qualified for SSA designation as argued.​

PC’s staff, in their own words (below) are characterizing Pinelands Villages as ‘growth areas,’ which is based on “assumptions” (PC words) and not solid legal fact. These assumptions (political?) are not backed up with sound reason.​ 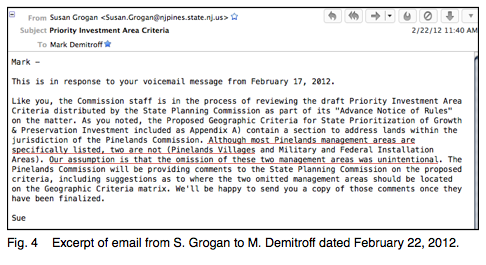 So you are saying that the MOU and the SSA do not agree with each other as to which villages are subject to the new designation as a growth area, and that this is not resolved yet. Do you expect it to be resolved and made clear? In your opinion, will they include all 47 villages as growth areas, or only 23 of the 47, or none of them?

Pinelands staffers are hell-bent on making all 47 Villages, without exception, sewered growth zones. The DEP and the Office of Planing Advocacy are not advocating Village inclusion. This incentive is 100% Pinelands Commission driven by every record I have found.

Principal Planner Paul Tyshchenko was charged with directing the Pinelands segment of the WQMP and mapping Sewer Service Areas. Here is what he ordered: 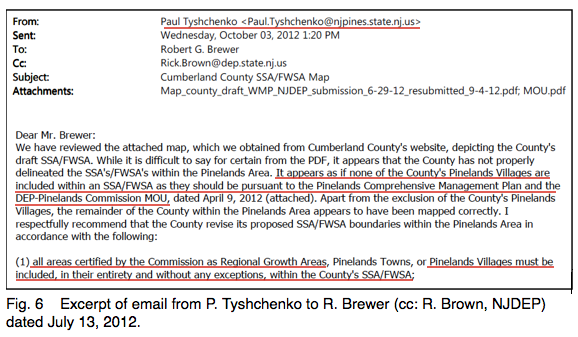 Tyshchenko incorrectly instructs, all areas certified by the Commission as Regional Growth Areas, Pinelands Towns, or Pinelands Villages must be included, in their entirety and without any exceptions, within the County's SSA/FWSA.”

PPA's Carrleton Montgomery, a planner and attorney himself, informed NJDEP: 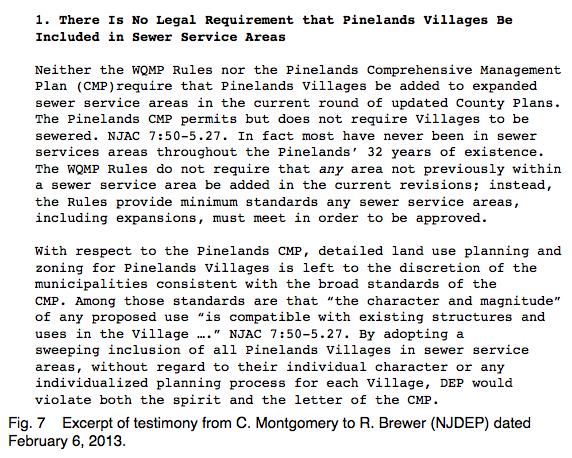 Tyshchenko has recently resigned from the Pinelands Commission without explanation. I assume the departure is related to this action by the State Ethics Commission:​
Agency Docket No. 16-12 – Administrative Action Complaint In the Matter of Paul W. Tyshchenko, esq., Former Principal Planner, Pinelands Commission, July 7, 2015 (10 pp).

Agency Docket No. 17-12 – Administrative Action Complaint In the Matter of Michael Yaffe (3 pp.).
​
At least four Pinelands staffers were involved in a private consulting Highbridge Group that worked for the same people they regulated. Here's another example of Tyshchenko ordering in legal language that Village Sewer Service is absolutely mandatory:​

Thank you for assembling your reply Mark. I understand better now.

Where one stands on this can be influenced by the property they own, of course.

bobpbx said:
Where one stands on this can be influenced by the property they own, of course.
Click to expand...

...or benefits whoever can take it. Remember, under redevelopment a redeveloper has vested rights like eminent domain and tax abatement. 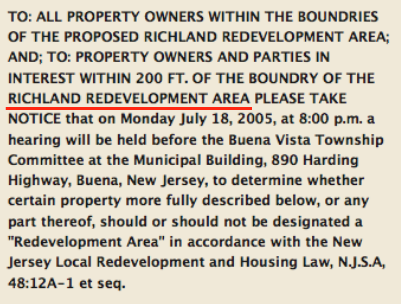 When the plans were being developed in Cumberland County there was a lot of effort to get places like Laurel Lakes, a heavily developed area with tiny lots all on individual well and septic systems, most with a high water table, in some kind of sewer service area. The state completely balked. Yet they insisted on getting the pineland villages, in areas with zero development pressure and lot sizes that would totally support a septic system, in a sewer service area. Go figure.
Reactions: Spung-Man

According to OPRA-obtained documents, six Pinelands Commission staffers were aligned with the Highbridge Group consulting firm. 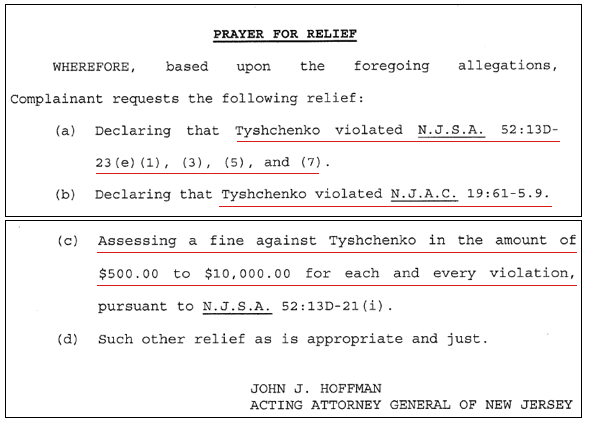 The fine is payable to the State of NJ or the Pinelands Commission?