Searching For A Cave In The Pines

Al (manumuskin) looked at me and said …… "you do know there is no cave there?"


I acquired a survey from 1996 for a tract of land the state had acquired, and while looking it over I noticed this.

I don't know about you but that intrigued me, but could there actually be a cave there? Well, I wanted to find out and today was the day. I had been looking over HistoricAerials.com checking the location out and decided that Al was correct. This could not be a cave and more likely it had something to do with logging or an old cellar hole. Here was my clue.


This photo shows the location circled in yellow in 1963. It is a mile from any paved road and quite remote. However, just 7 years later in 1970 we can see disturbance and logging going on. It is a mile walk each way down a few old roads that at times are hard to follow. After a few short wrong turns and an old cellar hole location we discovered, we finally were on the way there. Upon arrival I determined I was most likely correct. This "cave" was actually the loading area for the logs. It is very common for the loggers to dig a pit on the side of a hilly area for the trucks to drive into. This puts the loading area of the truck even with the ground for easy loading of the logs. Somewhat of a disappointment just like some of you may be feeling right now.

The "city boy" surveyor needs to learn a little about the pines before he survey's. But things were not all bad. There is a stone in that area and I made some educated guesses and calculations to figure out where it was. Unfortunately, this confronted me. Yikes! So while I made my way to it Jessica played in the cave. It wasn't a man cave so she was just fine. And she was just downright happy about staying there! Off I went trying my best to find a way around this crap and eventually I made it there. Five minutes of walking around in circles in the mud and I was rewarded with this. Not a great one but still what I was after. As we departed I took this photo of the area that was logged. The trees in the far distance are new since 1970. The cave is at the bottom right. Playing in the cave may not have been as safe as we thought. On the way back and on the ride home Jessica removed at a minimum 5 ticks. They were sluggish but none the less they were on the move.

On the way out we found this plant growing in the road. It was spitting out powder as we kicked them. Any idea's? Some "cave" - what were those surveyors thinking?

But I *know* there must be caves somewhere in the pines, they are just very well hidden. Where else would Bigfoot make his lair?

Guy, it's called a stalked puffball, not in the same order as your garden (or lawn variety puffball). The scientific name is Calastoma lutescens. It is a fungus that is persistent and "overwinters". It's actual "bloom" time is spring and fall.
The only reason I know this is that we found it on our hike on New Year's day.... quite interesting and a reminder that I need to become familiar with local mushrooms....I have a folder of photos that need identifying. It was growing on a pines road, about 1.5 miles from the nearest paved road.......

They are quite common in this area. 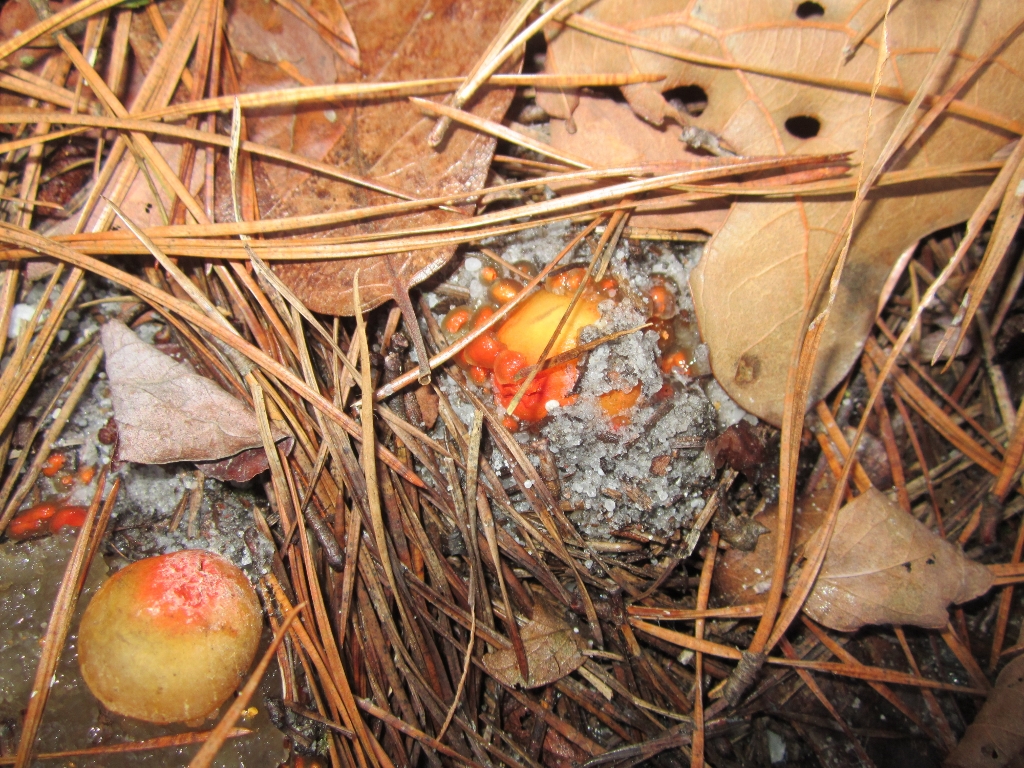 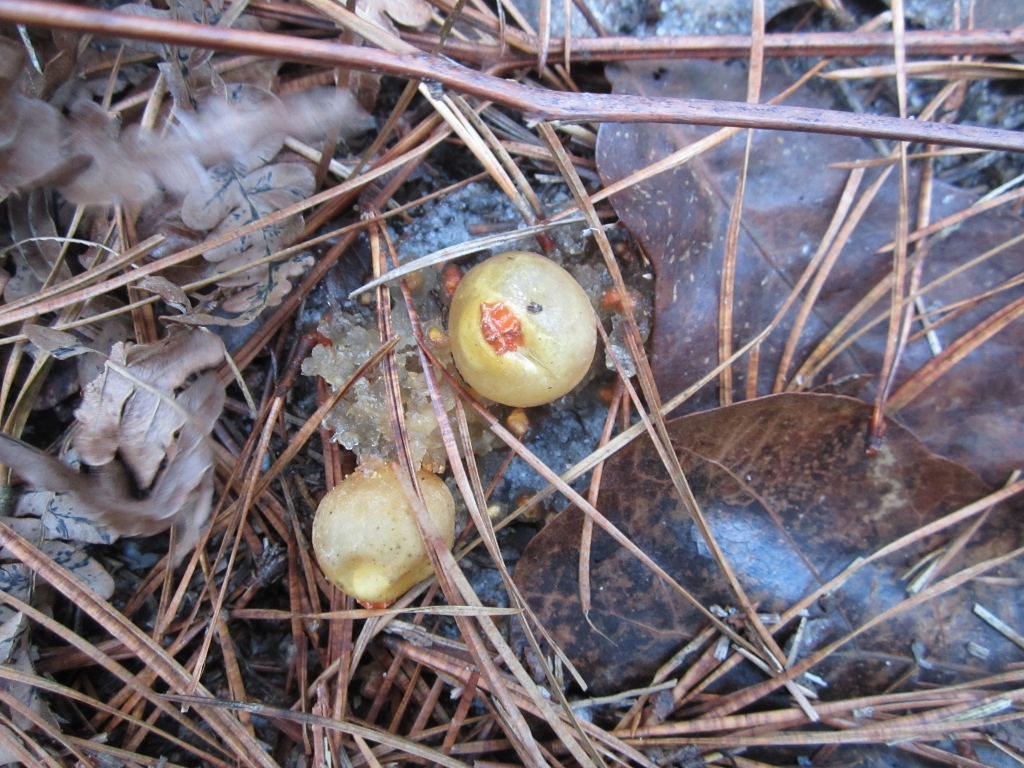 Thank you Turtle! This one and all the others were growing right in the road also.
Reactions: glowordz

The surveyor might not be so far off after all! I've heard cave used for cellar holes, and this might help explain numerous reports of Pinelands caves. According to the Oxford Dictionary the term can be used for any hollow or cavity. I was told by old-timers that when cutting wood was exhausted in one place, a new camp was established. The first thing a coaler would do was dig a square pit or cave. A portable hut was then transported from the prior pit site and placed upon the freshly excavated cavity. This hole served two purposes: 1) it acted like a root cellar to keep provisions cool; and 2) it provided a place of refuge if a wildfire burned over.

We built our timberfame in 1996 on the edge of a Thomas' camp, a Welsh operated coaling operation. My house is on the old Evans Place, but the bulk of the camp was at the end of Cambria (classic name for Wales) Avenue where the famed Mojito Field now is.


http://udel.edu/~mdemitrf/UDel_Web_9-4-12/5c.html​
​
The Evans family once lived in a hut above a 12-feet by 12-feet cave, which I conserved when building (below). Ole Uncle Jenk Evens when a young lad made charcoal back at Jenks Field, and lived atop a similar hole. 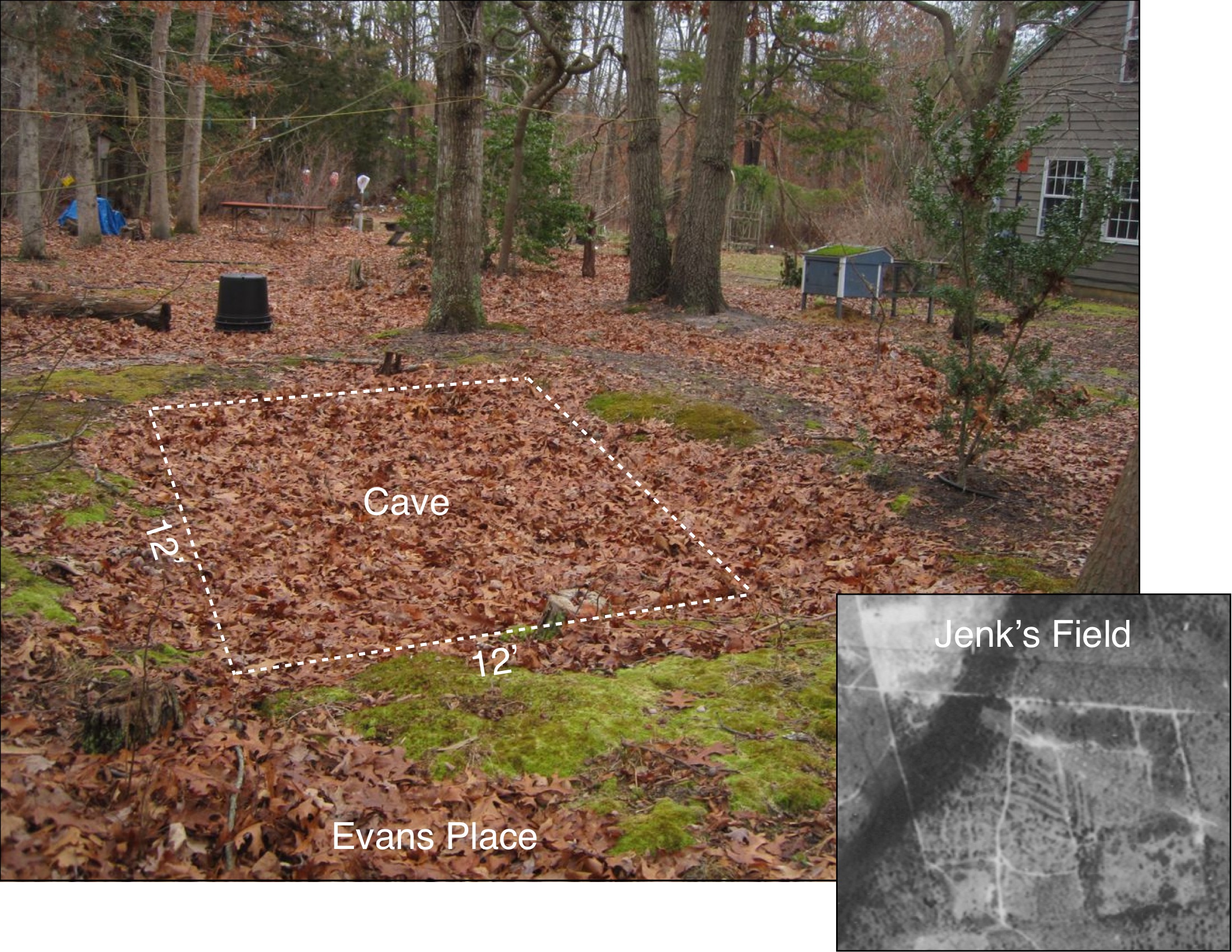 A nice alternate explanation. Thanks Spung-Man! For the vehicle to get out from this area at my location would have been a very tight maneuver. Very possible ... but tight.

Guy is that stone the same one that You ,Jess and I found the first time we went into those woods,the day we found the deer stand chained around a tree laying on the ground? It would be not far east of these coordinates 39.61540° N 74.47209° W or is that another stone I did not notice on the survey maps?I noticed some monuments up that way but the only stone i noticed we found that first trip and that looks similar to it.

You mentioned that to me once before and I don't remember that. You have to give me a date or something so I can check. I have searched for that and can't come up with a photo.

All I remember is last winter.we parked on 679 south of the crossing from wading river to bass river.Had Sophie with us and we found that very tall narrow manmade hill on the way out of the swamp.I found the stone after all three of us had gotten tore up in the briar patch right behind it looking for it.Don't remember the date and my pics are entirely unorganized.I will send you the exact coords of the stone and you can tell me if it is the one you found today.

Well, it took some searching but I now see we have been to that stone before. And the locked deer stand Yes that is the day! okay i was wondering if there was a stone on the map that I had missed in that area.That is the same stone at the very end of the trail.it briared up right past it.

After discussing this with Jessica we have decided that the cave may have been for storage. Because it was in the 1960's I doubt it was used to keep things cool or for fire protection, and that mystifies me as to why they would dig it in the side of the hill. They could have put the hole anywhere. I have viewed "loading docks" often in the pines and this looks similar to those.

I have been questioned on my geological leanings in the past but I do know what it takes to make a cave and south jersey doesn't have it.Cave it is not,now to find out what it is???

I didn't mean it was an actual cave, rather what Spung-Man said about it being a hole with a building on top. Jessica told me that while roaming around she saw metal sheets that may have been a roof or some part of a metal building

The 12-feet by 12-feet dimension makes it a good fit for the charcoal pit shanties I've seen. It is my understanding that colliers either carried huts on pole frames or they wheeled them to their new position. Camps were often large-scale commercial enterprises that provided provisions, livery service, and even portable housing for their workers. Why do you think it was constructed in the 1960s and is not an older structure?

Here is an update on the cave that this thread is about. You may want to jump up to the top and review before moving on.

As I find things in the barrens I keep a list of things to check on at a later date. I spent the morning doing research on Friendship Bogs, and while doing so I decided that it was time to investigate the cave a little deeper (pun intended). The information on this cave is in Book 1625 and I have the information below. In particular there are two places of interest with one obviously being the circled text. This tell us that the more recent surveyor did not just pull the cave information out of a hat, he read it on this document. The second piece of information is the very bottom paragraph. This tells us the book to look in for the previous sale of the property which was in 1962. So after reviewing that document it said the exact same thing. So if we go back up to the second photo at the top of this thread we can see that in 1963 the logging apparently had not started yet, so there is a good possibility the logging did not make this hole. After reviewing the 1955 sale which I did not make a copy of, it also said there was a cave hole which now traces this back even further.

However, the sale before that was in the 1930s and there was no mention of a cave. I also find it interesting that there was a stone with the letter P on it by the cave. The stone in the photo towards the top of this tread would most likely be that very stone. I did not see the letter P on it but I may have to make a return trip to be certain.

Yea, that is a confusing one. If there was a stone there it isn't there now.