Back in 2006 after a controlled burn, Ed noticed the ruins of a sawmill at Sandy Ridge near Carranza Memorial. I believe I have now acquired a stationary sheet for that sawmill that was printed in the 1920s. Lost Town Hunter and I have had quite lengthy discussions on Sandy Ridge. Most individuals consider the area near Friendship to be Sandy Ridge, but the old timers and the 1931 aerials aparently correctly locate it near the Jersey Central tracks at Carranza, and obviously near the sawmill shown above.

Whoa! Very nice, Guy! An ebay acquisition or from somewhere else?

Ebay. I still have a major interest in this sort of sawmill and I am always trying to learn more.

That's an interesting find Guy, and the saw mill near Carranza was quite substantial, unlike the temporary satellite ones we find around the forest.

I started to write a quick reply about my long ongoing confusion about Sandy Ridge, and now hours later I'm still trying to put it all together. It seems Sandy Ridge, saw mills, cranberry farming and the rail road are intertwined.

My first thought is that the origin of the name came from a topographical feature (duh). I have long been hiking the higher ground in the general area and seemed to be walking ridges, several candidates in different areas, but still the general area. It's sometimes hard to tell for the trees.

One area that stands out for me is this ridge, and it is very sandy. The yellow circled area is impressive. 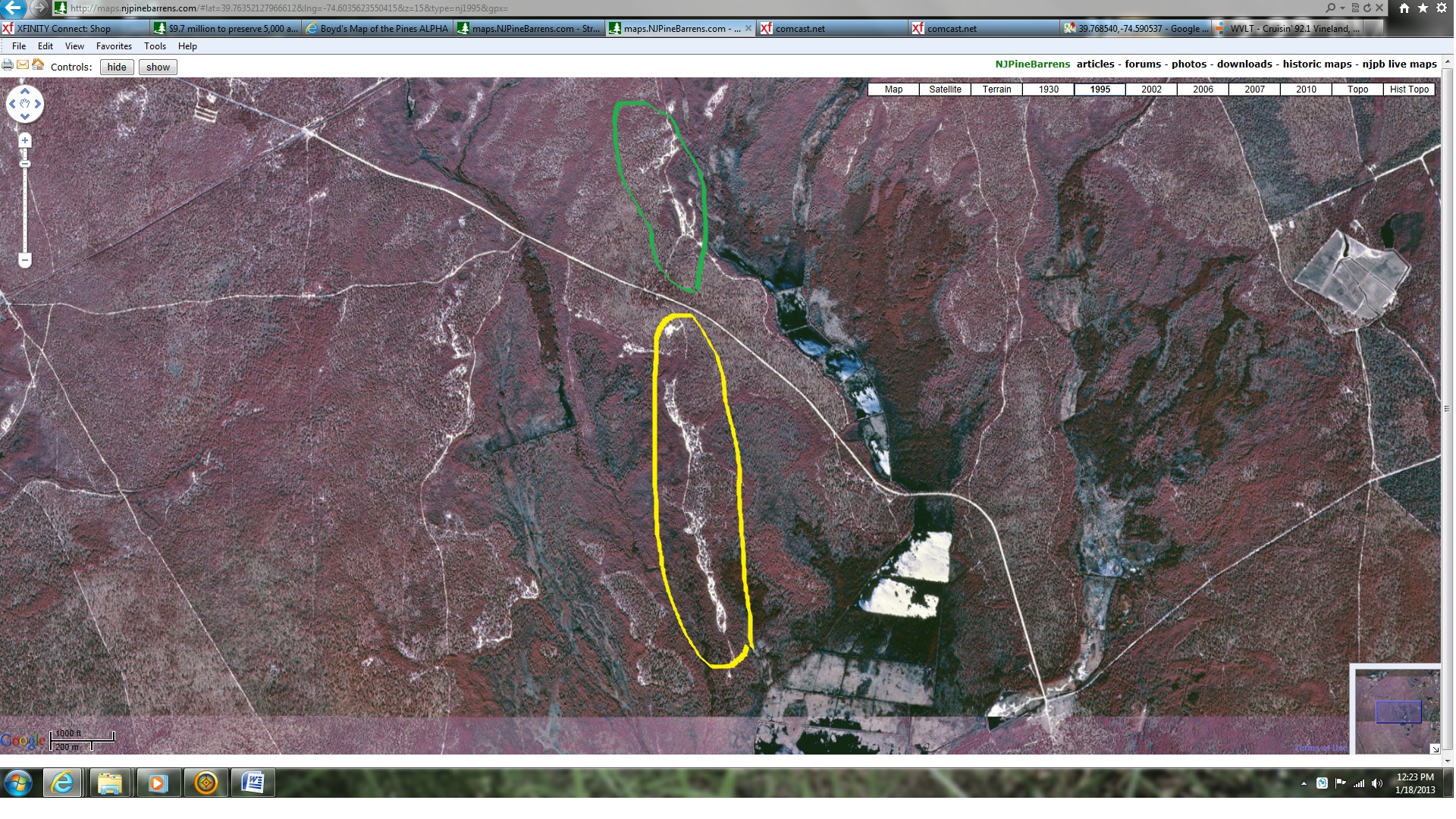 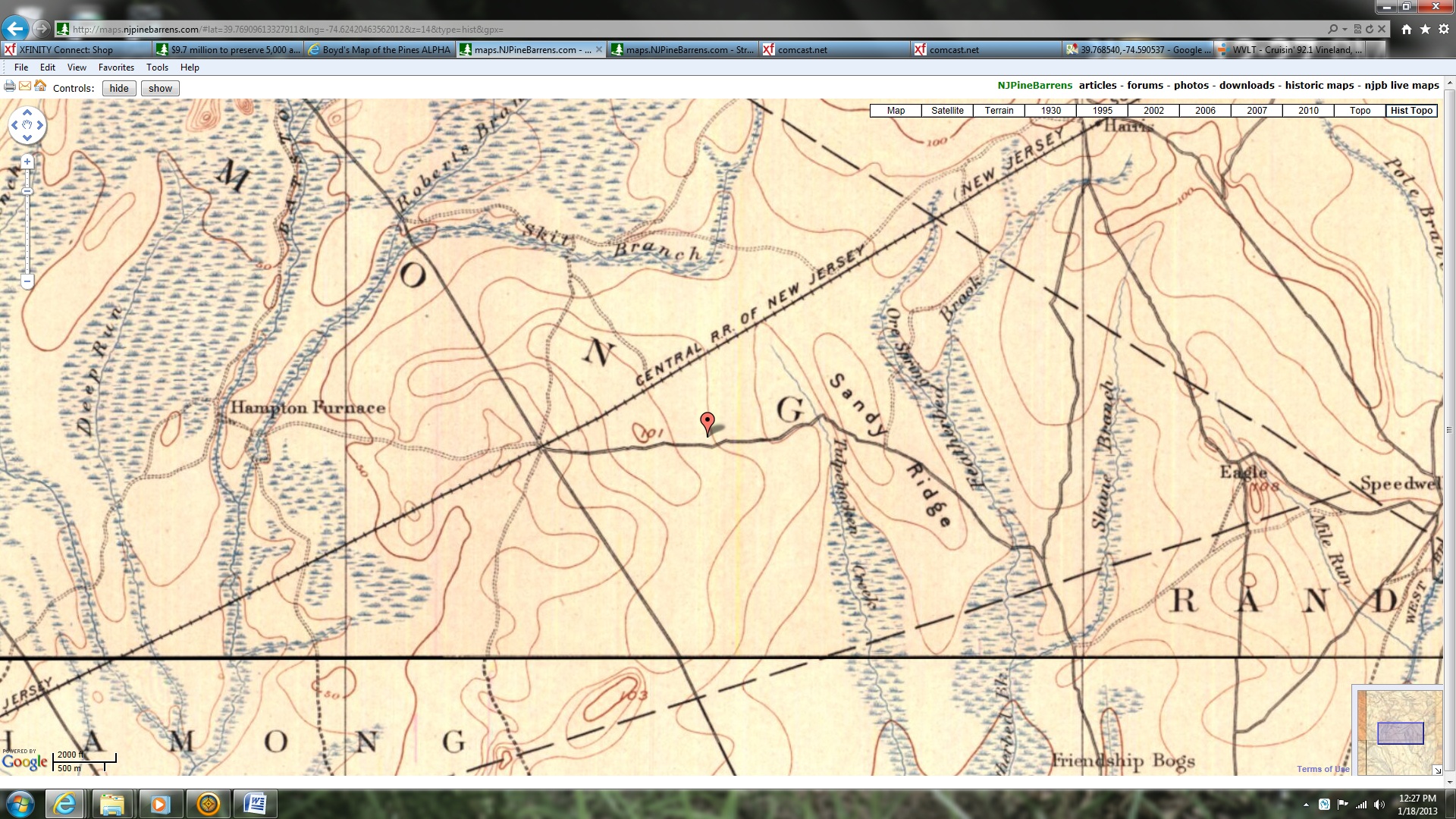 I also came across this survey in Ghost Towns and Other Quirky places in the Pine Barrens. 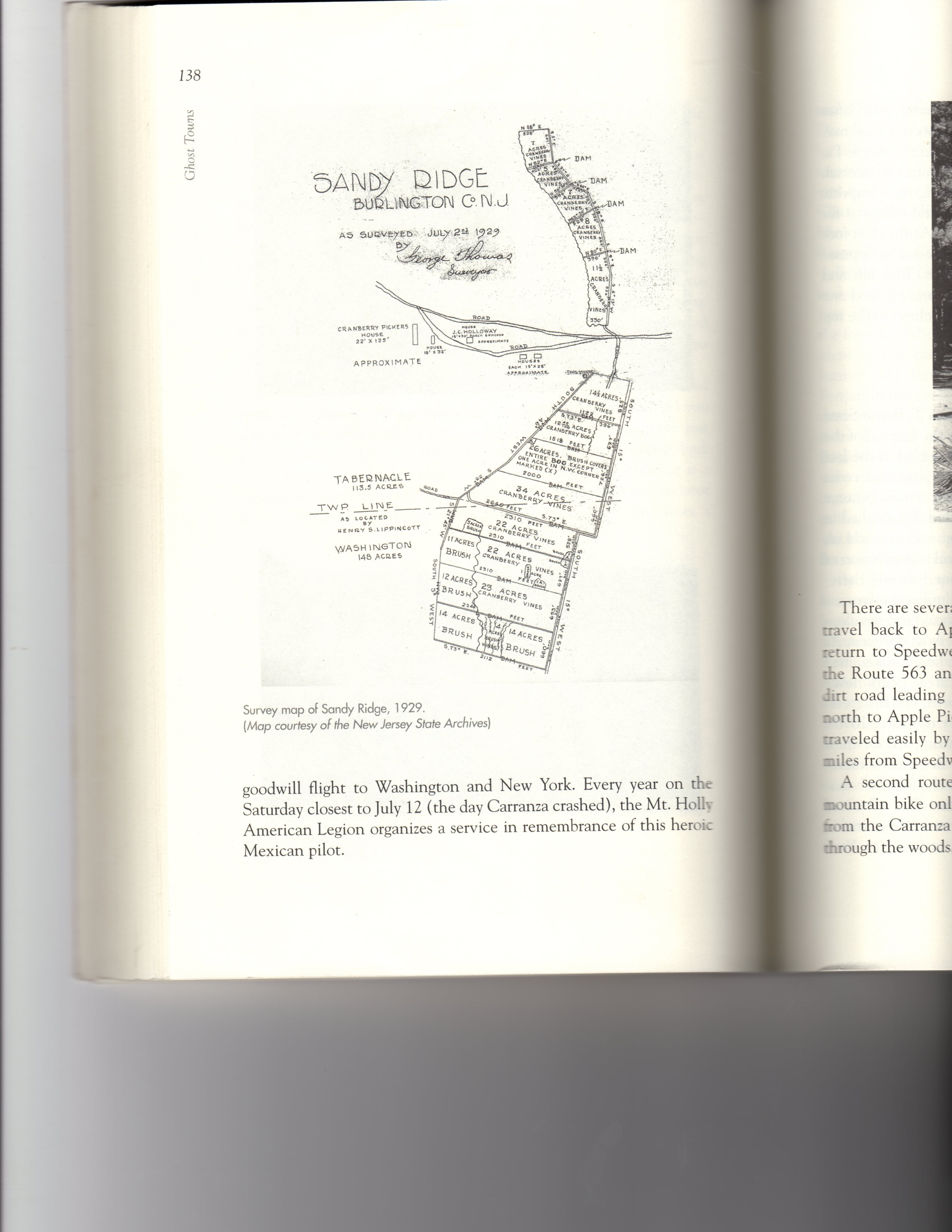 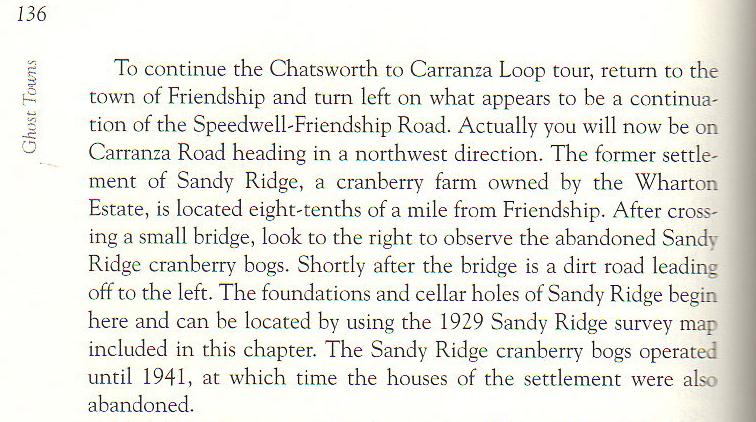 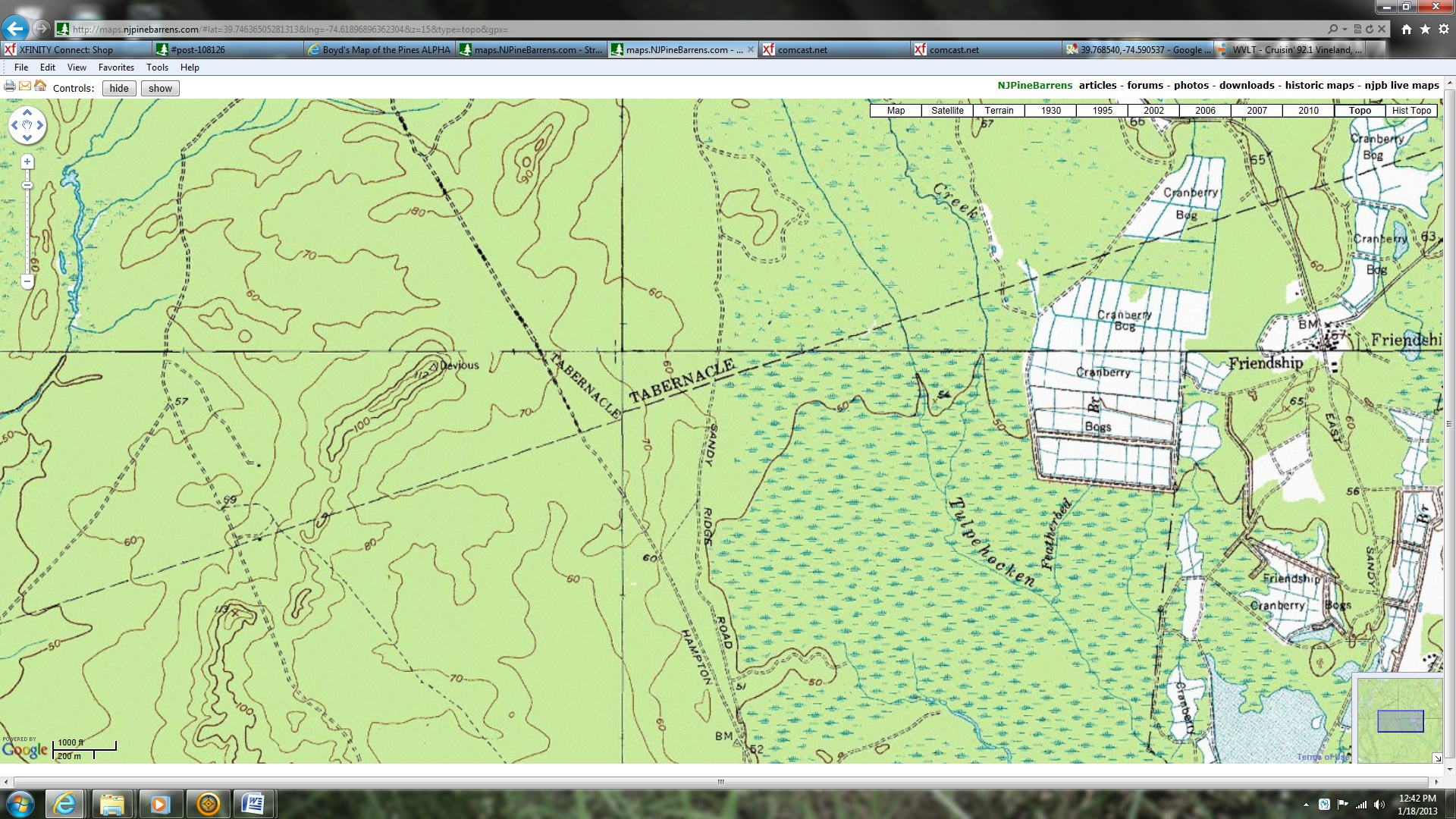 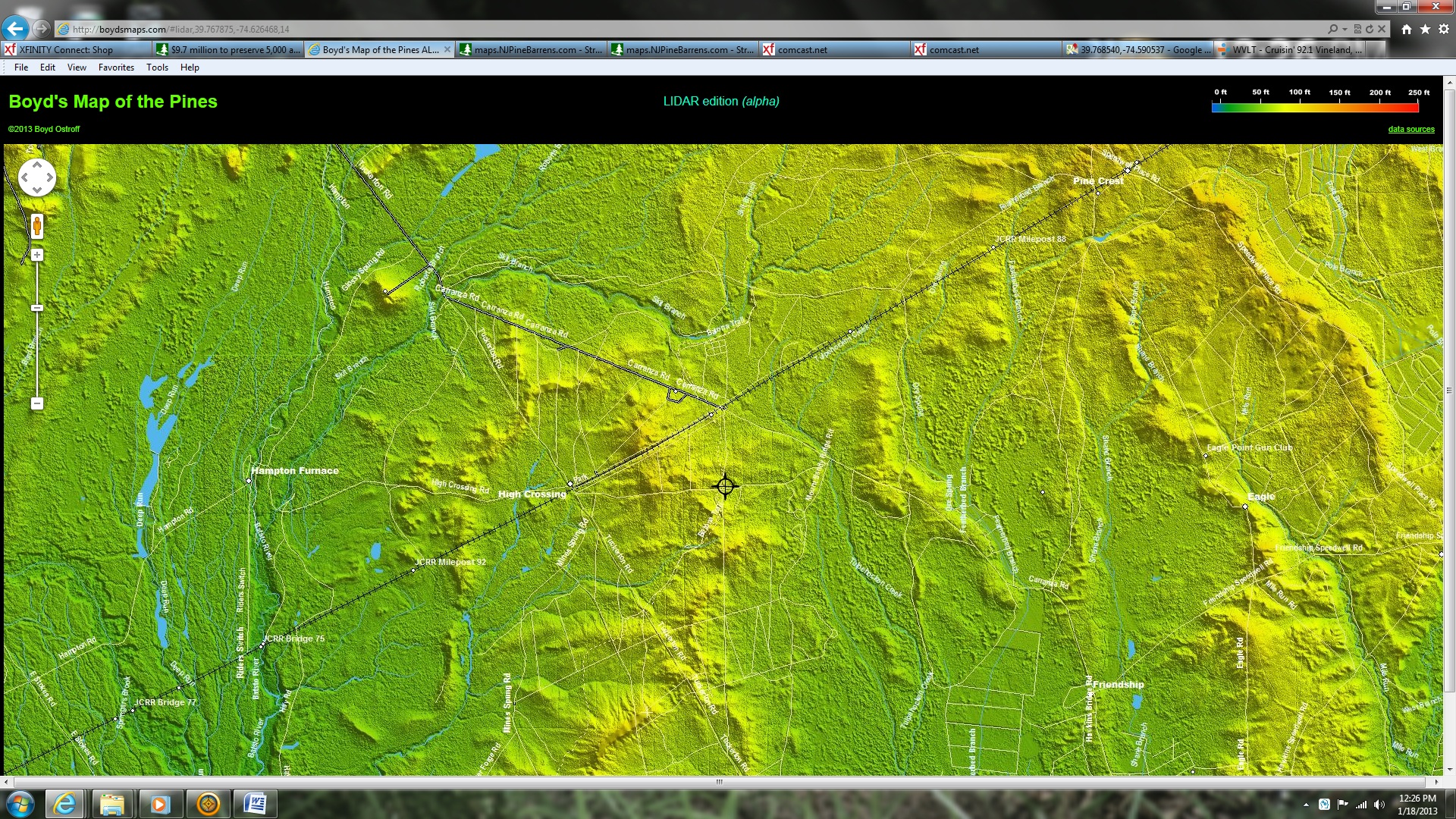 I belive Sansy Ridge is where it was placed on the maps. The stationary you found states Sandy Ridge because that is what it was closest to, not Eagle or Speedwell. I wonder what their mailing address was. Maybe Atsion?

Ecampbell, I am certain several cellar holes of the buildings depicted in the survey of Sandy Ridge are still intact along Carranza Road. Am I mistaking the location for some where else?


It was probably meant to be "Angus". If not, I bet that fellow McGrober became a great fighter.

Ecampbell, the cellar hole that is close to the road has several large trees growing in it. It can easily be seen from the road. I have never actually walked the area where the buildings are located, but I will make a point to stop next time I am near the area.

Print out that survey and take it with you. The roads are still there so you will know where to look.

Lost Town Hunter and myself together have spent some time exploring and discussing the "Sandy Ridge" ruins near Friendship. We have come to the conclusion for various reasons that the map in the Ghost Town book is inaccurate. Notice it says "approximate" and we believe it is just that. Recently, I spent some time looking the area over on HistoricAerials.com and made waypoints of all the dwellings over the years. Jessica and I then went there and we found ruins within 15 feet on every one that had brick or stone foundations. Aerial photo's do not lie

In any event, Lost Town Hunter and myself have planned to go there soon to map the place out in more detail. With a tip from me he was able to talk with individuals who used a building there in the 50s and we were sent photo's of it when it was standing and right after it was razed when the state purchased Wharton. I can't post them because we are doing this together and what we have learned is not all my doing. I want to be a team player.

As for the location of Sandy Ridge, I again have to believe Lost Town Hunter is correct. People just called that complete area Sandy Ridge even though the area Ed circled is the most sandy ridge around there. I have driven that ridge and it is quite interesting.

If you remember they claimed Carranza's plane crashed at Sandy Ridge and that is a couple miles from the Sandy Ridge on the Ghost Town map. I am certain we will never come up with the exact "location" of Sandy Ridge. There are just too many places around there that was called that.

Also, where it says above that the houses were abandoned in 1949 is just not true.

Teegate, was there ever a smaller sawmill associated with the activity pertaining to the cranberry bog operations? I am referring to the concrete slab and square with four bolts in it very close to Carranza Road with in the "buildings".

Gibby said:
Teegate, was there ever a smaller sawmill associated with the activity pertaining to the cranberry bog operations? I am referring to the concrete slab and square with four bolts in it very close to Carranza Road with in the "buildings".
Click to expand...

That has been discussed many times between Lost Town Hunter and myself. We are uncertain what that is but it sure looks like one. You can actually see that on one of the HistoricAerial views. It could have been something for the cranberry bogs or even at one time used for the cutting of the woods to build the buildings there. I really can't answer that.

Teegate said:
If you remember they claimed Carranza's plane crashed at Sandy Ridge and that is a couple miles from the Sandy Ridge on the Ghost Town map. I am certain we will never come up with the exact "location" of Sandy Ridge. There are just too many places around there that was called that.


I have very much enjoyed following this thread. The billhead is amazing! Surly Ed must be correct about the area getting its name from the geography of the place. Finding an exact location for Sandy Ridge would be like picking one single place to call the Forked River Mountains or The Jackson Meadows.

My guess is that “Sandy Ridge” shows up closer to the railroad tracks on the 1931 aerial due to the fact that there was a station/depot on the Southern named Sandy Ridge (later Carranza) located there. It is my belief that this station was probably not much more than a siding for loading cranberries and lumber.

As for a settlement called Sandy Ridge, it seems to me that Wharton’s Sandy Ridge bogs would be the only meaningful location for a village there. Interestingly, Wharton never lived long enough to see his bogs at Sandy Ridge developed. He died in the early part of 1909 and that spring the bogs were built along the stream there and the vines were set out. Wharton had grand plans for expanding his cranberry empire at the time of his death and the scheme was at least partially carried out by his superintendent and managed by his estate. I am fascinated that the Friendship Bogs of Evans and Wills were started some 40 years before Wharton’s cranberry bogs along the headwaters of the Tulpehocken.

I would guess that the concrete base (with bolts) near the Sandy Ridge bogs may have held the motor used to run a saw mill as it is almost identical to others found throughout the pines. Since Atsion was the center of Wharton’s cranberry sorting and shipping operation, I doubt that any significant machinery was needed for handling the berries at the bogs there. Perhaps in building the bogs at Sandy Ridge, the large cedar swamp needed to be cut and the trees milled. Maybe Wharton was harvesting timber from the land there even before his cranberry endeavor.

Incidentally, the map of Sandy Ridge was drawn by George Thomas who lived at Jenkins Neck. He was a cranberry grower from that area and amateur surveyor. He died in 1930 from a heart attack while fighting a forest fire in 1930.

The Central Railroad of New Jersey established Sandy Ridge as a point on the line where the company constructed a passing siding in 1900. In 1912, the CNJ established a flagstop with only a platform, probably to accommodate the cranberry workers. In July 1935, the CNJ changed the flagstop name to Carranza, but discontinued the flagstop three years later. In 1943, with passenger service completely ended on the Southern Division, the CNJ pulled the passing siding.
Reactions: Teegate

What would we do without "The Trail of the Blue Comet"?

Mead seems to have been a lumber merchant from Glassboro in the early 1900's. He purchased 7000 acres near there and erected a mill in 1906. Apparently he already owned a mill near Cumberland at the time. Later he became Sheriff of Glassboro. Crane was also in the lumber business and hailed from Clayton.

Nice information everyone. Thanks. I will add some with more to come.

Mulford F. (Frank) Crane was born November 28, 1890 at Landis in Cumberland County. His father was Stephen P. and his mother was Harrett E. In 1910 at the age of 19 he was living in Clayton with only his mom so his father either died or was no longer with them. The 1913 Bridgeton NJ City Directory shows his address at "NW High Broad" and his occupation as a Lumber Dealer. His 1917 WW1 draft registration shows him living in Clayton but I believe he never served. He also is listed as an Assistant Cashier at Clayton National Bank.

At the age of 29 he is still living in Clayton with his mom but married to Dorothy M, who is two years younger. When he was 38 years old their children were Steven age 7, Frank age 5, William age 4, Samuel age 2 and a woman named Mary Moore living with them. She was 20.

His WW2 draft registration shows him living at 205 W. High Street in Clayton. The rest of the family was the same except now we have Mary Fisher age 74 and Laurence Fisher age 37 living with them. On March 23, 1946 Mulford Frank Crane departed this world at the age of 55 leaving his wife still alive.

Now lets discuss Robert Mead. Most likely there was a spelling error on the census or the enumerator made a mistake which apparently was corrected later. Robert Mead is listed as Robert Moad in the 1910 census. He was 52 years old (about 1857-1858) and married once for about 27 years. His occupation was a Lumber dealer, Employer, and he rents his home.

Going backward to the 1895 census another Robert Mead pops up adding some confusion. The one above shows that the daughter Mary is now listed as Maria and Soula is Louis.