Does anyone know if there are any special reg's for Webb's, i.e. no entering the patch, boardwalk access only? The place is beginning to look like the scar. Pix to follow.
J

A number of years ago Ro & I were there and a group were tromping all over the area and on many of the fragile little gems. Upset, we told them what they were doing was terrible; their leader said he was an instructor and for us to get lost. That's when we realized there are no signs that say absolutely stay on the boardwalk.
Common sense is not common.

I contacted F&W, no reg's regarding off boardwalk excursions; only no damaging or cutting vegetation. There were a couple of holes where something was taken, F&W said no permits have been issued, and an out of state guy out in the middle taking pictures who didn't care for what I told him. F&W said they would forward my info to law enforcement.

I wish that some people would stay the hell home.

I have mixed feelings on this. On one hand the boardwalk railings certainly imply you should stay on the walkway, even if the officially regulations do not state as much. I'm always bothered by those thinking rules are for others. On the other hand, the feature that makes this site worth visiting is a collection of disturbance oriented species. Limited disturbance (with extreme emphasis on limited) can encourage the interesting and rare species, rather than discourage them. We normally associate the kind of disturbance with fire, logging, etc, but trampling followed by a period where the vegetation is allowed to recover, can create idea conditions as well. Unmanaged disturbance, however, is certainly going to be hit or miss in it's value.

The boardwalk itself may even be a problem. I've been visiting the site for over thirty years now and have noted a gradual succession of woody species, which could eventually threaten the more "valued" plants. Some time ago our own Lost Town Hunter told me he believed the walkway railings, which didn't exist on the original boardwalk, might be discouraging deer browse on the woody species, allowing them to gradually claim the site. It would be nice it the site received some genuine management, but I'm not too optimistic about that, giving the current economy within the state. There are certainly more productive bogs in remote areas for botonizing, but this site's accessibility makes it an idea teaching tool.

GermanG said:
Limited disturbance (with extreme emphasis on limited) can encourage the interesting and rare species, rather than discourage them. We normally associate the kind of disturbance with fire, logging, etc, but trampling followed by a period where the vegetation is allowed to recover, can create idea conditions as well. Unmanaged disturbance, however, is certainly going to be hit or miss in it's value.
Click to expand...


As you probably know, it is a fen, which is why resolving the beaver situation was so important. Unfortunately, in a spot as popular as Webb's, that recovery period is extremely doubtful. In past years, there was little, if any, off-board excursions, it has now become commonplace. It is still recovering from the multi-year Beaver flood and the folks going off-boards are not being careful, the one photo shows the uprooted vegetation. Only time will tell, but by then it may be unrecoverable. Hopefully F&W will just erect a simple sign

I walked all over it before there was a boardwalk.I had no idea I was destroying the Pine Barrens.Sorry:-(
N

BTW, my comment was more directed toward 46'er's post that there were holes where plants were taken. Apologies if I sounded grouchy.
C

Just went there with my brother and 2 kids, cool spot , cant believe a holes would get off and walk through it, I would have thrown rocks at them.

Can you believe those A hole deer walk through it and even dare to nibble an occasional rare orchid now and again?
Reactions: Boyd
J

Al:
Yeah, but at least they got small feet and plant them pretty far apart. But their nibbling/gobbling orchids is something else......
C

I cleaned up quite a mess this morning at the outflow of the bog. Loads of monofilament line, packaging for a new Penn spinning reel, hot dog and snack food bags, cans, cigarette butts galore , and of course the ubiquitous gray plastic Walmart bag. I also noticed there was a clearing with a pile of sticks making a wall with a wooden table, sheet of plywood, etc south of the outflow on the east side of the road, Have any of you noticed this before?

Haven't been there in a while.

There were some plywood sheets with graffiti on them at the big pine intersection last time I was around back. Looked like a paintball target. Its been there for some time.
C

This was not at an intersection and all the wood was graffiti and paint ball splatter free: That looks like it has been there a while.

CurMUDgeon said:
This was not at an intersection and all the wood was graffiti and paint ball splatter free:
Click to expand...


Can you be more specific regarding this spot? I can't tell where you mean. Is this the location? 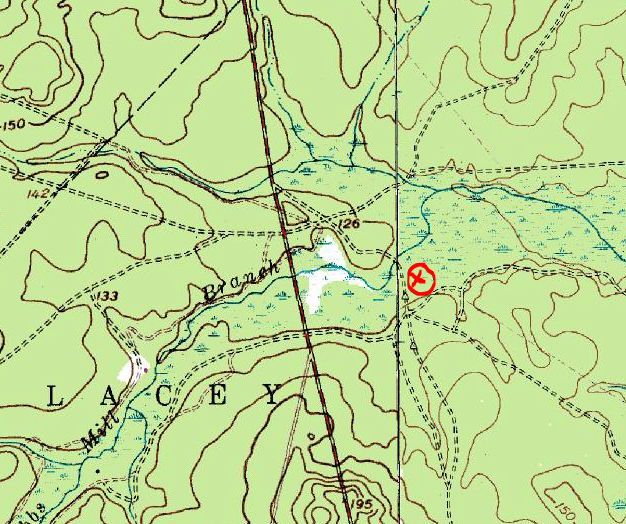 N 39 53 16 64 W 74 22 27 89 It was the first spot south of the outflow on the east side where I felt that I could park without being an imposition to any passing vehicles. Your "X" looks pretty close but it was right off the road, not in too deep.