A Memorial Day story from Richland

I thought it might be fun on Memorial Day weekend to provide an account of someone who lived on my farm, Evard Snell. He came to the property as a young boy to live with his Aunt Rachel and Uncles Jenk & Thomas, original Welsh settlers to Richland. Things weren’t so good back home in Vineland. As a boy he’d walk the tracks to Milmay to visit a Civil War vet at Doughty’s Tavern. Samuel Morey was a master coaler and axeman who told stories of battles at Bull Run, Winchester, and Gettysburg. He passed away in 1942 at the age of 103. His lore encouraged young Evard to run away at 14 and enlist for WWI service in Baltimore. An earlier Vineland attempt was truncated since everyone there knew Evard was too young to join the cause. Snell was stationed in China when WWII broke out, so fought throughout the Pacific theater. Here’s a newspaper account about his famous Vineland flag:


First U.S. Flag Hoisted In Recaptured Solomons Came From Philadelphia​
​
Philadelphia Record, WASHINGTON, August 29, 1942(?). The first American flag to be hoisted over territory captured from Japanese in the present war was a tattered and faded scrap of bunting measuring six by eight inches. It was carried by a Marine officer around the world for eight years., the Navy Department announced today. The little flag was run to the top of a Japanese staff at Kukum, on Guadalcanal Island in the Solomons, on August 7, eight months to the day from the Japanese attack on Pearl Harbor.​
​
Raised by Philadelphian.​
​
The man who raised it was Lieutenant Evard J. Snell, whose wife and two sons live at 1324 S. 50th st., Philadelphia. Lieutenant Snell was one of a little group of Marines pushing inland in the first phase of the Solomons battle. The lieutenant bought the flag at Vineland, N.J., on Memorial Day in 1934. Since then it has flown from a barracks in the Philippines in 1936, over a tent in Cuba, and as an identification on a ricksha used by the lieutenant in Pekin and Tientsin in 1937 and 1938. The story of the little flag’s big moment was relayed to the department by a Marine Corps combat correspondent.​
​
Wife Weeps With Joy; Unaware He Was Officer.​
​
Lieutenant Evard Jenkins Snell is a tough, sentimental Leather-neck with a trunkful of World War 1 medals and the reputation of being the only living man ever to outscore Colonel Anthony J. Drexel Biddle in hand-to-hand combat. Last night his wife, Myrtle, 26, who lives with her parents, Mr. and Mrs. William J. O’Brien, at 1324 S. 50th st,. was told the story​
​
Continued on Page 9, Column 6. (which I don’t have!)​ 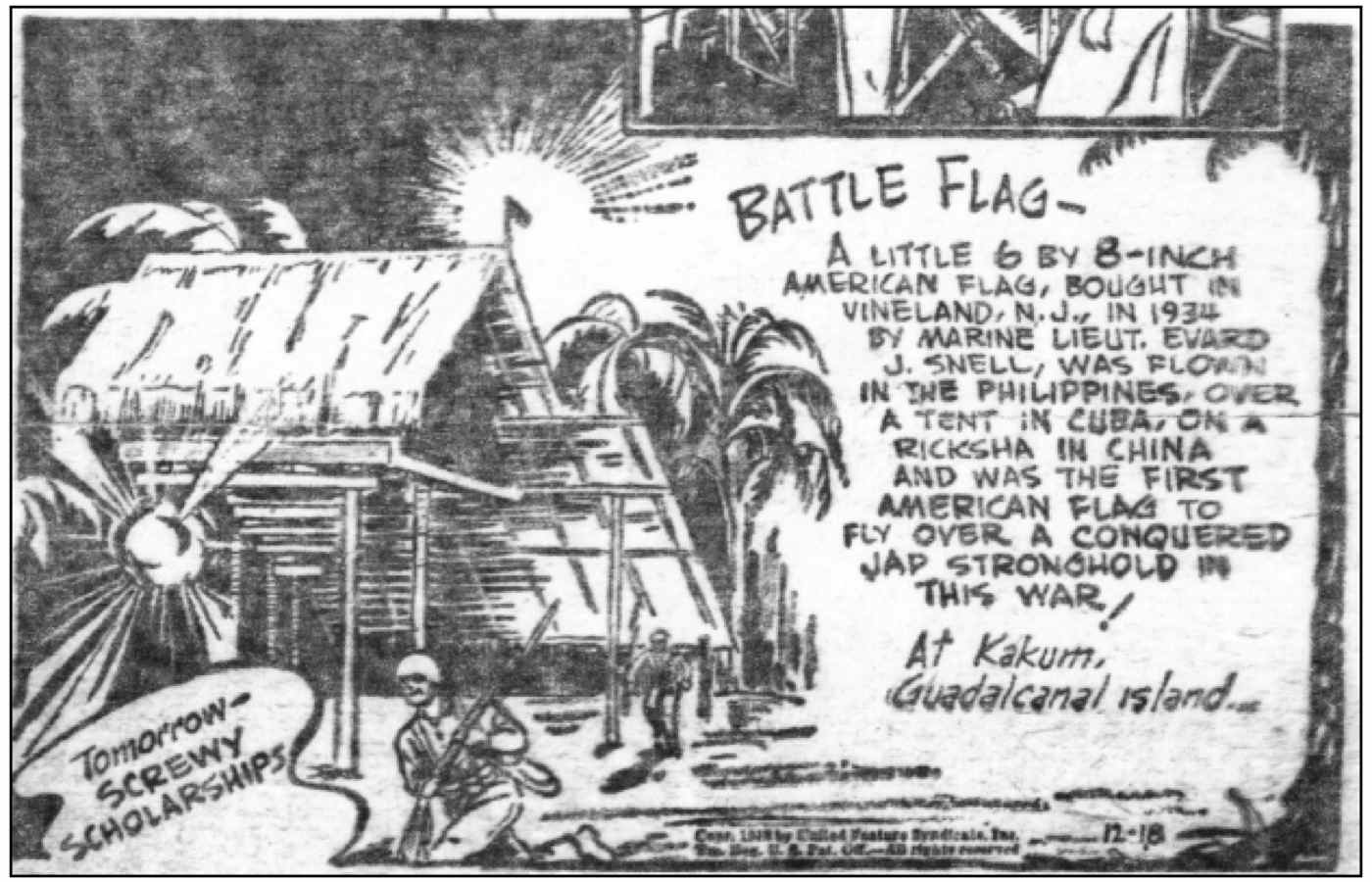 Both Ole Uncle Jenk and his brother passed on as very old men in the mid 1960s, about the time I went to Richland School. Their house even then had no electric, the tracks blocking access. Kerosene lamps emitted a bright pure white light, the best Richland General Store had to sell. They would putt, putt, putt down the road in an ancient sedan en route to the AC racetrack; a scary site when combined with their long black coats and long white hair as I waited for the school bus.

Great story Mark. Somehow you need to get page 9! The Historical Society of Philadelphia seems to be the place that has them.

Jenkin (Evard) Snell was my Great-Uncle and he did not die in the 60's. I met him when I was very young and he was very old in the mid 80's. My mother always called him Uncle Jynx and his wife was Aunt Myrt. I would like to share a link to another story about Major Jenkins and his wife proving they were alive in the 90's, but as this is my first posting, I'm not allowed to include a link. Sooo...if you'd like to read the story, Google "Guadalcanal Snell" and it will be the first thing that pops up. The story always makes me cry! Anyway, thank you for posting the above article, and especially the little cartoon! My siblings and mother will love it.


This was posted before I believe.

I am excited to hear from a family member! Uncle Jenk Evans did pass away in the '60s. You are referring to his namesake, Jenkin Snell, oldest son of Evard. He was a nephew of Ole' Jenk. Myrtle was his mother. The family kindly allowed me to copy photos, which I will forward if you provide an email in a private message.

I am excited to hear from a family member! Uncle Jenk Evans did pass away in the '60s. You are referring to his namesake, Jenkin Snell, oldest son of Evard. He was a nephew of Ole' Jenk. Myrtle was his mother. The family kindly allowed me to copy photos, which I will forward if you provide an email in a private message.

I would also appreciate copies of pictures of my uncle, Evard J. Snell. Recently became interested in genealogy, but since I'm on the West Coast my access to anything but the internet is very limited. As you said - "glad to me family", hello to both you and Cathleen Fisher. How do I get you a private message to pass along e-mail? Thanks

I just went back into my files, and will scan some family notes and photos that I think you both will enjoy as much as I have! 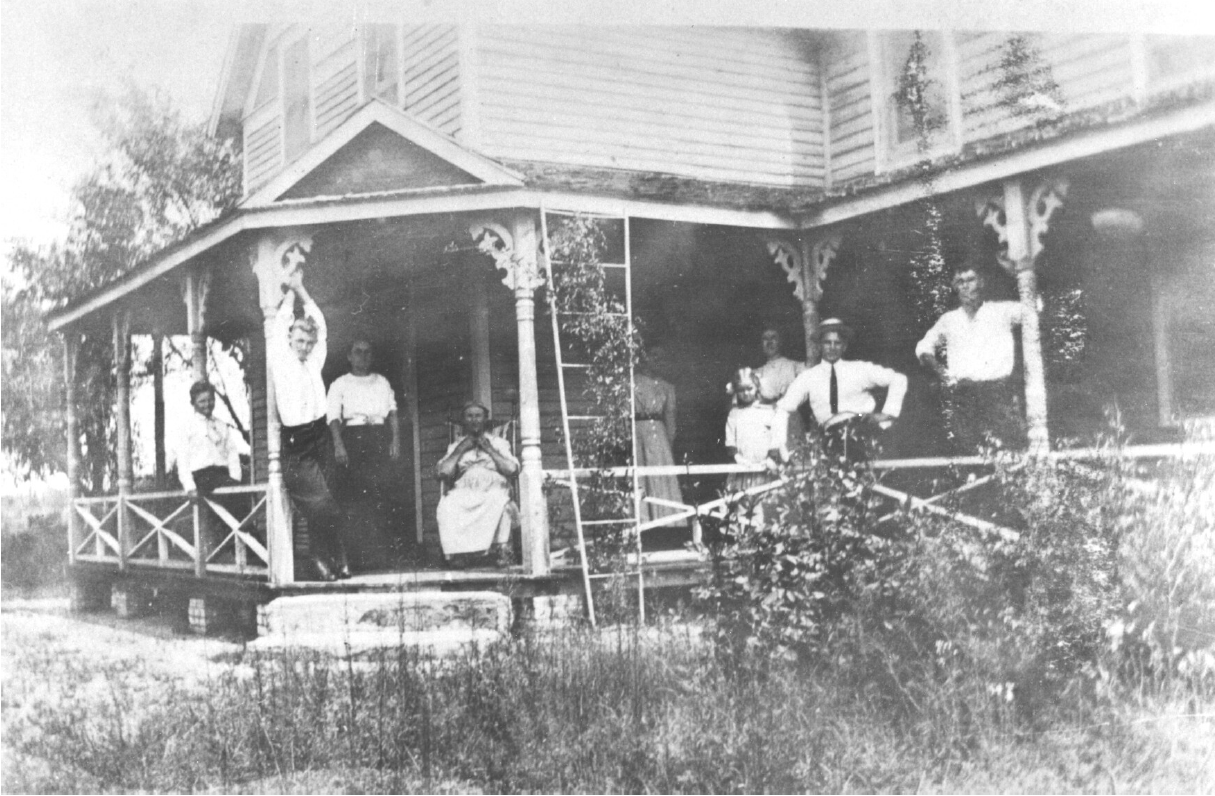 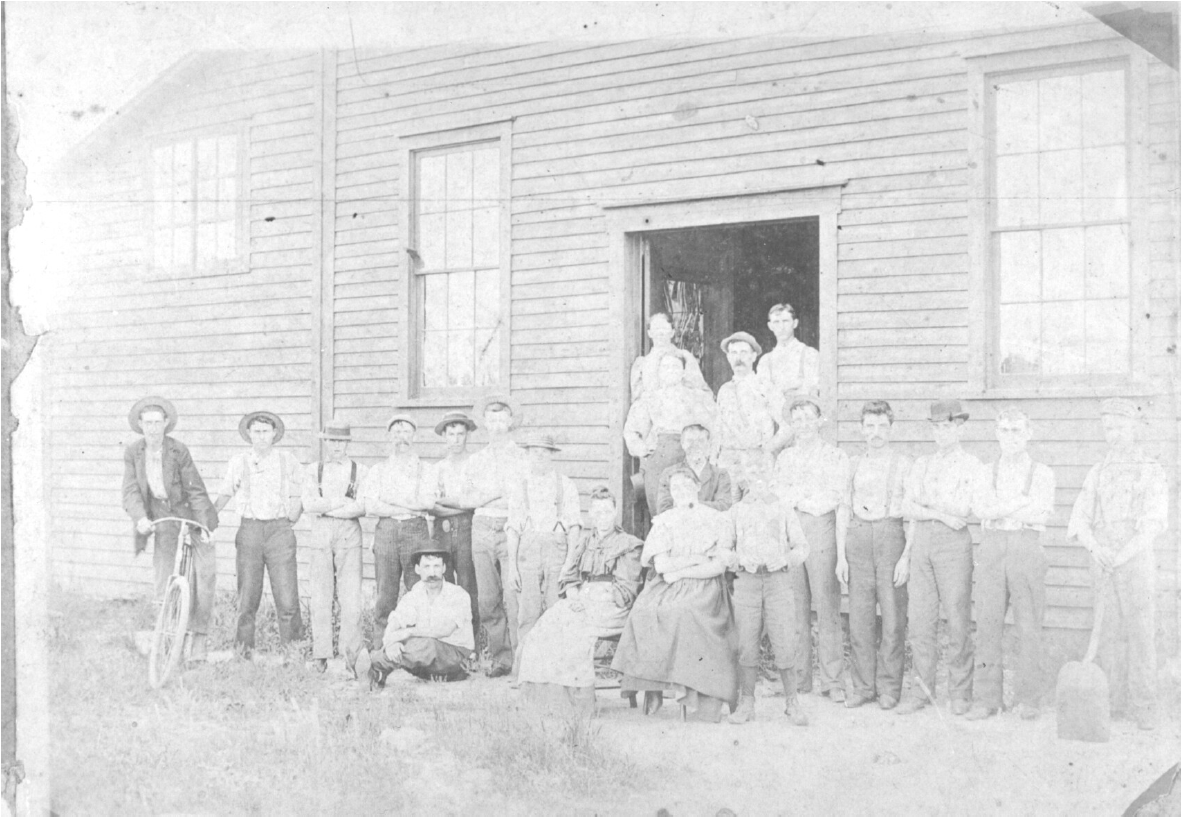 Reputed Richland rug mill, which burned down when a kerosene lamp tipped.​
​
Richland's rug mill was never rebuilt, as owners ER Wood and CW Jones squabbled over who would pay to rebuild the structure. Wood owned the cotton mill in Mays Landing, and envisioned settlements built along the West Jersey and Seashore Railroad that would use his products. Milmay also had a rug mill. After the mill fire, many workers moved to Freehold, NJ to work at that rug mill. Coincidentally, I had a mini backhoe and was hired in 1987 to work inside the Freehold rug mill when it was retrofitted into condominiums. This is the only known photo of the rug mill, as identified by Myrtle Snell.​
​
Here's the rug mill's location:​
http://maps.njpinebarrens.com/#lat=39.49618478281726&lng=-74.86595876487729&z=17&type=nj1930&gpx=​
​
The fire was so hot that spectators had to watch the conflagration behind the protection of the WJ&SRR station's walls across the tracks.​ 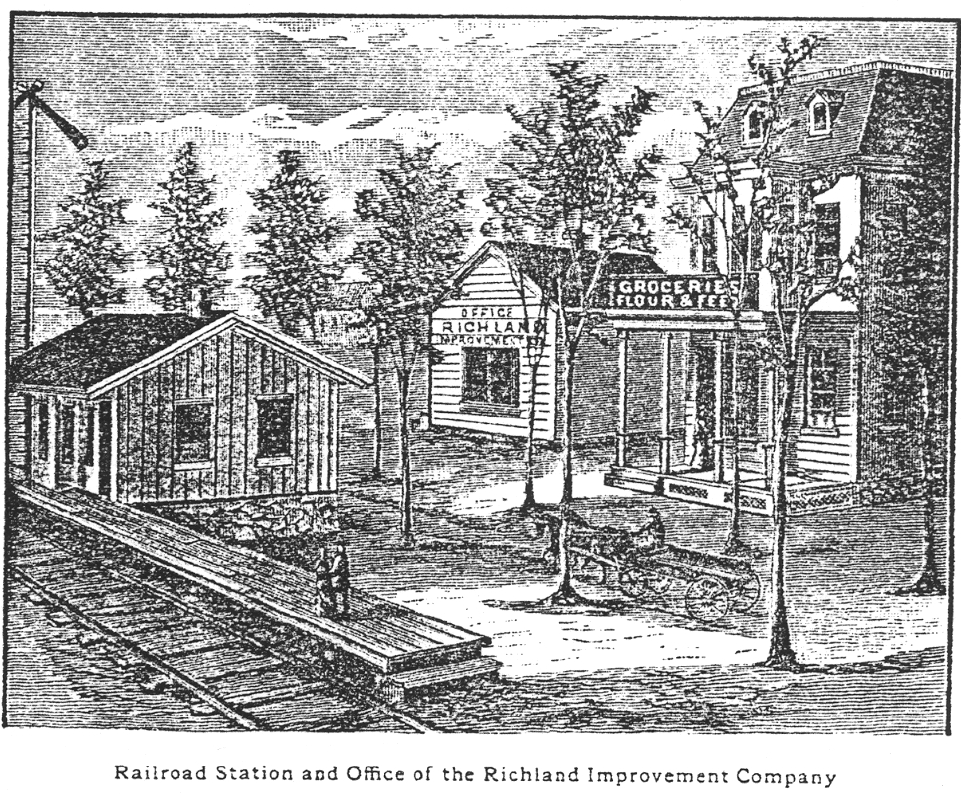 Excerpted from Jones, C.W., c.1888: Richland New Jersey: ​
20,000 Acres of Farming Land, also Farm Lots. Richland, NJ: Richland Improvement Co. 16 pp.​
The mansard roof building is North's Store.​
The land office is now, I believe, a cottage.​
​
I would love to keep in touch with your family, and the gate is always open! (mark at buckhorn-gsi.com).​
​
S-M​
Reactions: John
C

I completely lost track of this webpage! Thank you for posting these pictures. My email is caf600 at yahoo. Unfortunately, I do not have any pictures, my mother still keeps them all.
B

I was curious as to when the rug mill burnt down. I had an uncle who worked possibly in that mill or one relatively close to South Vineland. I do know that he wound up in Freehold and worked in the big rug mill there for a few decades. He is very possibly in that photo of the Richland mill.
You must log in or register to reply here.
Share:
Facebook Twitter Reddit Pinterest Tumblr Email Share Link
Top