Cook's Map of the Pines HD

I'm finishing up a new historical map that has been a fun (but complicated) project. It's based on the 19th century George H. Cook / C.C. Vermeule topo maps from Rutgers (these are the same maps available here at NJPB: https://www.njpinebarrens.com/historic-maps/topos/george-cook-1889-topo-maps/ ).

I have color-corrected and stitched together the 8 maps of Southern New Jersey to create a seamless map for Mobile Atlas Creator (the same software used for my other maps) so they are compatible with Garmin handheld GPS units and over two dozen apps on Windows, MacOS, Linux, iOS, Android and more.

Here's an index that includes the original Cook Atlas sheet numbers and the map dates. These maps overlap in a strange way, so it's a bit like a jigsaw puzzle. 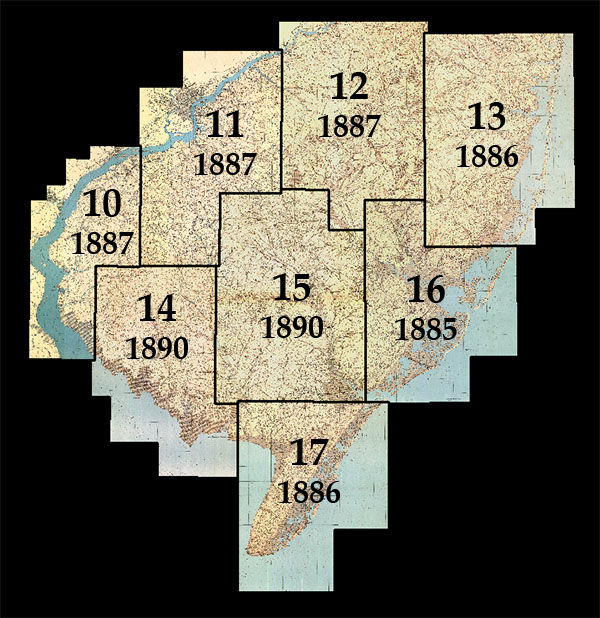 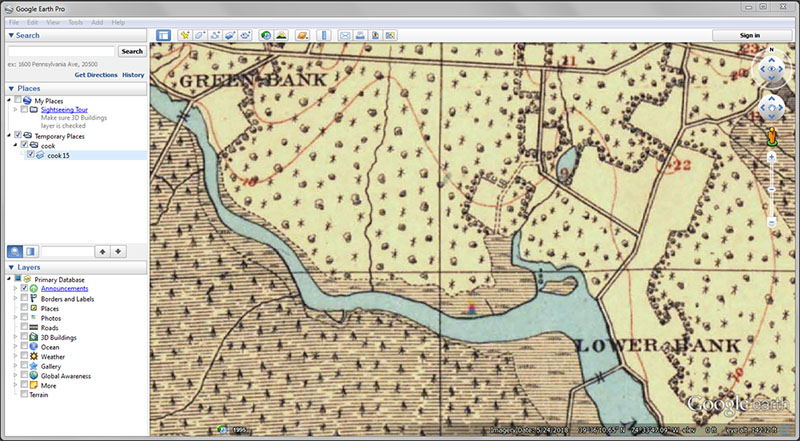 So why did I use the "HD" title for these old maps? It has to do with the way they have been processed. Typically, scanned maps are georeferenced by just matching the outer edges and possibly a few points inside. I have gone way beyond that to match road features with high resolution modern data. This squeezes and stretches the imagery to correct for errors. There are about 2,500 points like these throughout the map. 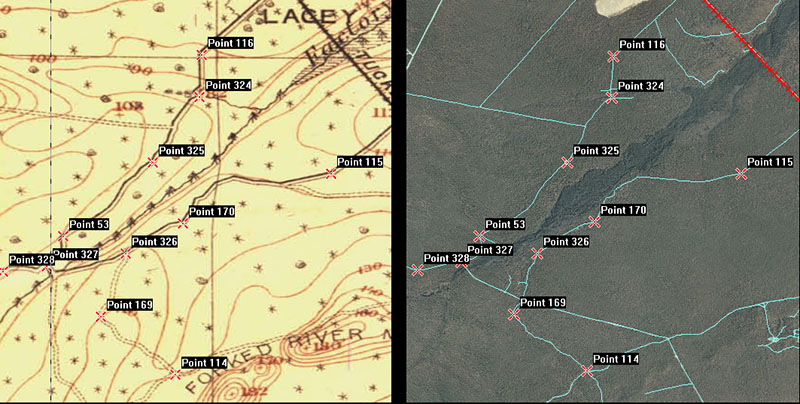 The result is accuracy that you would not expect from a vintage map. The magenta lines are high resolution roads overlaid on the map. You can see the increased accuracy as compared to 19th century maps from the USGS, such as my "1899 in the Pines" map on the right below.

The improved accuracy makes it easier to compare historical features with modern aerial imagery, or to just see your position on the 19th century map as you hike around. Aside from that, these are really terrific old maps. I know that some of you are fond of the "1899 in the Pines" map, but I think Cook completely blows that away. There is really a lot more detail and information - especially landcover. The little trees are not just a decorative feature, they graphically show the mixture of coniferous and deciduous forests, cedar swamps and more. There are some surprising little details, such as deciduous windbreaks around clearings in pine forests, for example.

Now the precision georeferencing does create some artifacts in areas where there were big errors on the original map. These are typically visible as distorted text or wavy grid lines. But I think that's a reasonable trade-off for the accurate roads. You will also see some glitches on the boundaries where the maps were stitched together, which was difficult to avoid. But I think you'll enjoy these maps.

Am making some final corrections and creating the documentation now, and it should be available for download before the end of the month.

I can't wait! The Cook-Vermeule maps will be a very important contribution to anyone with interest in land-cover change. They are a snapshot of the region’s late nineteenth century landscape. Paul Stewart Wichansky did a doctoral dissertation on land-use change, which was based on the valuable information contained within those maps.

According to Wichansky, New Jersey was the first state to complete an official geological survey to map on a scale of one inch to one statute mile (1:63,360) with land cover information. Wichansky interpreted and painstakingly manually digitized the distribution of wetlands, forests, and other land cover to note landscape changes between then and now.

Thanks Mark! I am really impressed with the amount of detail in these old maps, and you're right, they show not only the proportion of pines vs. oaks but also the density. I don't think any other maps reflected this much landcover detail until NJDEP started offering their Land Use/Landcover (LULC) dataset in the 21st century.

For example, note that the clearing Southeast of Sooy place is surrounded by a deciduous windbreak with medium density oaks on the Northwest side, a less dense oak-pine forest to the East, a cranberry bog in the South East, wetlands to the South, pine forest below that, and cedar wetlands to the Southwest. Then note that the clearing to the North of Sooy Place is just surrounded by medium density oak-pine forest with no windbreak. USGS maps have never shown this much detail, even the 24k topo maps. 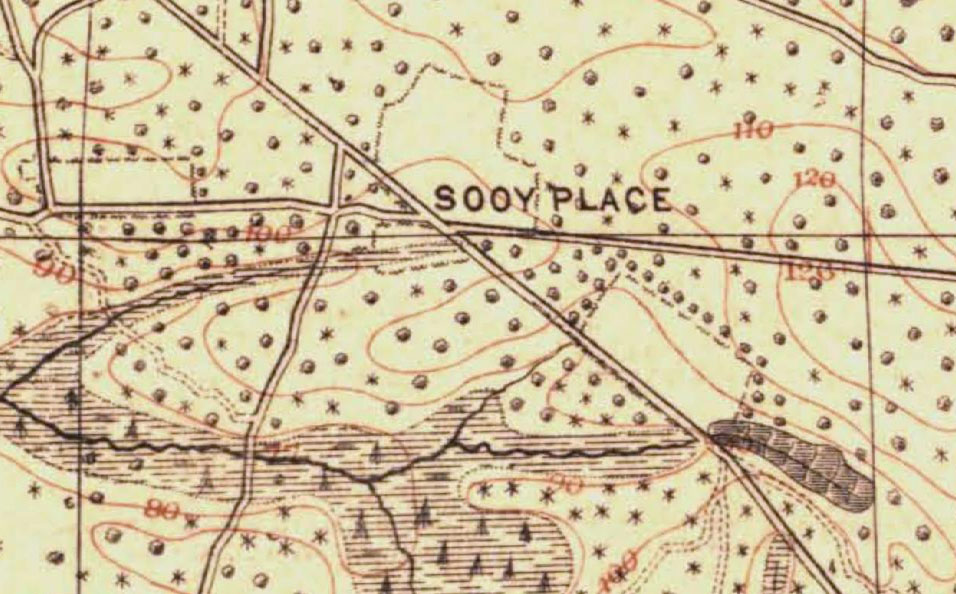 About the only thing missing from these maps is buildings. It's also curious, there are virtually no road names on either this map or the USGS maps from the 19th century.

I did not realize NJ was the first to create maps with this level of detail or that they were used by Harshberger, and the story of the surveyor and the barmaid sounds like a good subject for a movie (or at least a folk song)!

I have a webpage up for this project now, although there are no download links yet. Am going to spend a bit more time working on the final map, but it's coming soon.

I thought the clearings were accurate but thought the ground cover was more art work then information.Never realized it was a vegetation map.Thanlks Spung!

FWIW, here is the USGS map of the same period: https://boydsmaps.com/1899-in-the-pines/

There is just no comparison... 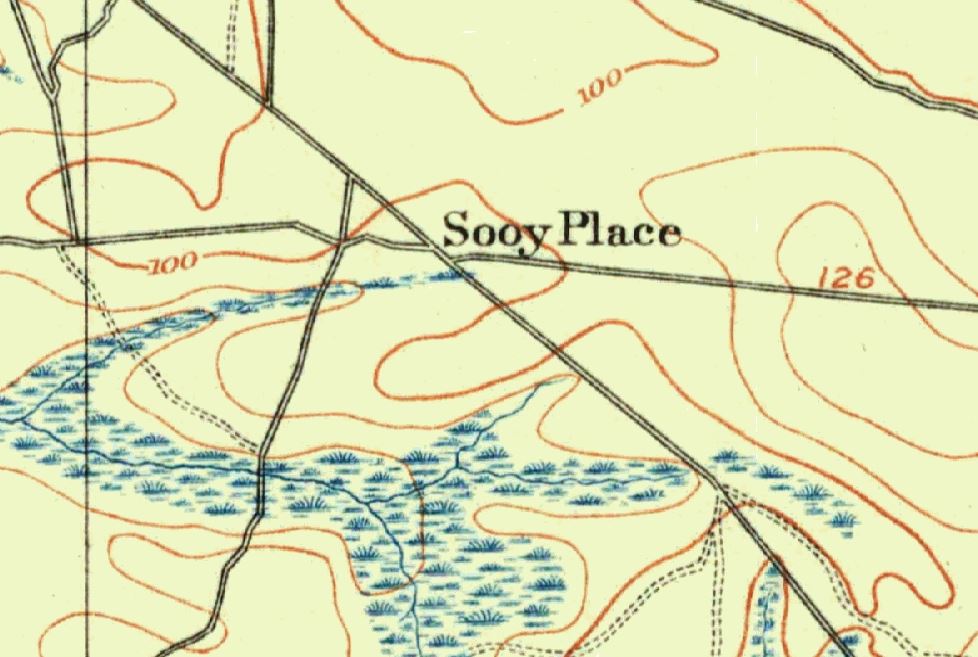 To get a little more geeky about this (if anyone cares

), I believe the NJDEP started classifying land use and landcover in 2002

Landcover data has always fascinated me and I have incorporated it into many maps, My 2018 map of NJ shows forest canopy and displays 2012 LULC data as you "mouse around". Note the similarities to Cook, the same clearings to the Southeast and North of Sooy Place are still there. 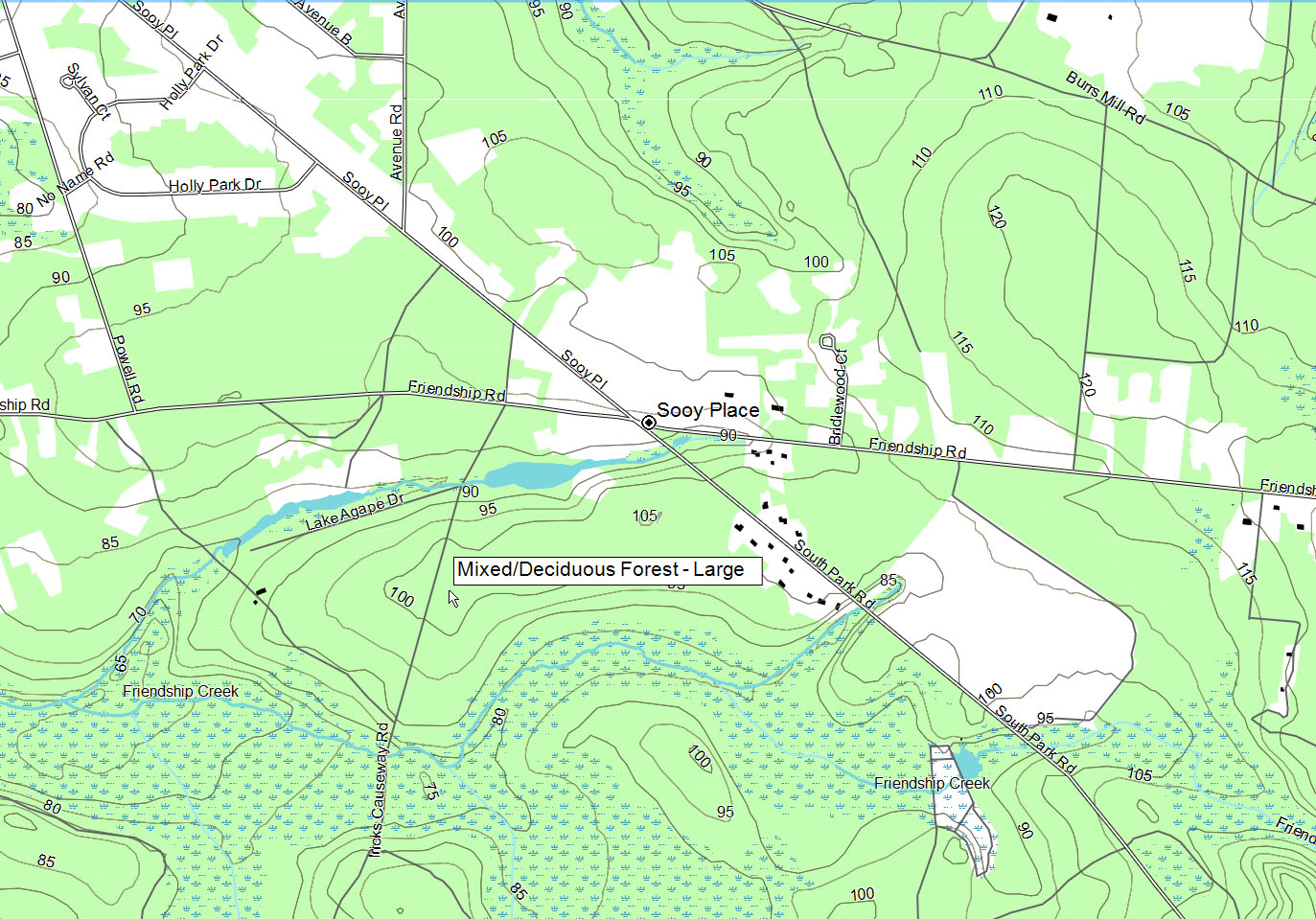 You can actually match many of these codes to the graphical representations in the Cook topo.
Last edited: Feb 13, 2019
Reactions: bobpbx and manumuskin

Boyd, swinging over to here from my earlier question about georeferencing on another thread.

Do you use ArcGis when you do work such as the above?

No, ArcGIS is above my pay grade.

Now they used to have a "personal edition" that was inexpensive, not sure if that still exists. But it had some strict limitations on what you could do with it, I think it was mainly for students.

I have used GlobalMapper since I started making maps 10 years ago. It is very powerful and it used to be reasonably priced. But - like any good software from a small company - a big firm gobbled them up, so now I'm stuck at my 8 year old version because I can't afford to upgrade.

There is a free open source GIS application, qGIS, that runs on Macs, Windows, Linux and even Android. It is quite powerful, and I've played around with it a bit.

But I'm just so familiar with GlobalMapper and can work so fast in it, am not willing to change. And learning new GIS software is not a trivial task, especially with some of the advanced techniques I use with custom scripts and database import/export. But it looks like qGIS can do georeferencing, if that's what you need. You would probably need to Google up some articles or videos to figure out how to install and use qGIS, it's not something for a "casual user".

OziExplorer is a Windows program that has been around for a long time, and I used it for georeferencing many years ago. There is a free trial but it has limitations. In 2019, I think $95 for old software such as this is a bit steep.

Thank you for going to the trouble of putting all those links together Boyd. Yes, Arc is expensive!

What does qgis get in return from users for providing a free tool such as that. Advertising?

I don't think qGIS gets anything - that is the whole idea of open source software. https://en.wikipedia.org/wiki/Open_source But in today's world, a degree of skepticism is understandable.

As I've gone around and looked at mapping sites, I now have websites showing up on my browser uninvited, like this one:

I had to add an block site extension to Chrome to remove it, then I got a different web site intrusion. May have to take radical action.

Boyd said:
No, ArcGIS is above my pay grade.

Now they used to have a "personal edition" that was inexpensive, not sure if that still exists.
Click to expand...

But you have to click through multiple "buy now" links to find out how much it costs. And then you end up on a page that says you need to create an account and sign in to see the price.

Cook's Map of the Pines is now available - scroll down to the bottom of the page for download links:

Like my other universal Mobile Atlas Creator maps, it's compatible with Garmin and Magellan handheld GPS units in addition to over two dozen apps on Windows, Macintosh, Linux, iOS and Android. There are over 60 pages of documentation, including an updated version of my Mobile Atlas Creator tutorial that will teach you everything you need to know to install and use the map and software. Read the documentation here:

In addition to the full Mobile Atlas Creator (universal) version, there's also a lower resolution version just for Garmin handheld GPS units. The Garmin version uses 24 foot per pixel imagery with JPEG compression while the HD version uses higher quality PNG files at 12 feet per pixel. But if you only want to use the map on a Garmin GPS or in Basecamp, the Garmin version is much simpler. Just drag and drop the files on your GPS and head out to the Pines!

Although the quality is lower, you may find it good enough for most purposes, and it's only a 75 MB download instead of the HD version at 2 GB. Documentation for the Garmin version is available here:

Just finished a non-stop 8 hour marathon to finish the documentation, package the map and build the web pages. So, let me know if everything works for you... at this point about all I can do is stare cross-eyed at the computer screen!

Thanks; that is a good looking map