ANYTHING other than snow is nice. I am soaking up the 50 degree heat, I love it!

MikeBickerson said:
ANYTHING other than snow is nice. I am soaking up the 50 degree heat, I love it!
Click to expand...

Soak well, it might not be over yet. The 'B' word is being floated about.

We have had some big late comers over the years;

Last night the people at Rita's in Medford were lined up in 40° + weather for their "free" water ice. We jumped in the express line and had to pay.

This should be interesting to watch

The model consensus is for the primary low to form off the Georgia and South Carolina coast late Monday night, which, quite frankly, is amazingly far south for this late in the season! However, given the strength and depth of the arctic air in place ahead of it, it's perfectly reasonable to expect. Then, as the storm moves northeastward over the comparatively warm waters of the Gulf Stream, and the second feature quickly approaches from the west-northwest, this storm should literally explode Tuesday afternoon and Tuesday night, tracking toward the Gulf of Maine Wednesday. Look at the 0z GFS forecast for 18z Wednesday: 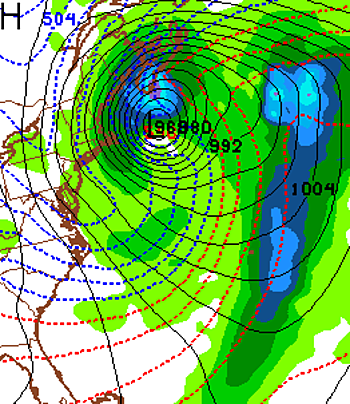 That's about as nasty of a nor'easter as they come, and it will cause all kinds of disruptive problems along the way. The most obvious of those is the potential for snow, potentially crippling snows, from parts of North Carolina and Virginia to New England, depending on the track of the storm. There will also be the problem of power outages from strong winds, coastal flooding, beach erosion and the like. This has all the earmarks of a destructive storm, and my guess is that southeastern and eastern New England will bear the brunt of it when all is said and done.

The one 'good' side note from the storm is that after it blows by and reinforces the arctic air, it will all lift out to the northeast quickly. That means a quick snap back to normal by Friday and Saturday, if not above it, and the promise of a milder pattern to open up April!
Click to expand...

They still saying Tuesday afternoon? Got some plans outside in the morning. Last I saw was 3-5 inches in our parts Tues afternoon and night and possibly another inch Weds morning.

They still saying Tuesday afternoon? Got some plans outside in the morning. Last I saw was 3-5 inches in our parts Tues afternoon and night and possibly another inch Weds morning.
Click to expand...

PINEY MIKE said:
They still saying Tuesday afternoon? Got some plans outside in the morning. Last I saw was 3-5 inches in our parts Tues afternoon and night and possibly another inch Weds morning.
Click to expand...

I'm sure it's more fun to visit sites that are predicting a blizzard, but personally I'll stick with the National Weather Service. They constantly update the forecast as more info become available: http://forecast.weather.gov/MapClick.php?lon=-74.31829&lat=39.89283#.Uy7y4hZVh5g

Tuesday
A chance of snow before 1pm, then rain and snow likely. Cloudy, with a high near 35. Southeast wind 7 to 11 mph. Chance of precipitation is 70%. New snow accumulation of 1 to 2 inches possible.

Tuesday Night
Rain and snow likely before 7pm, then snow. Low around 26. Chance of precipitation is 80%. New precipitation amounts between a tenth and quarter of an inch possible.
Click to expand...

The projected totals are increasing.... 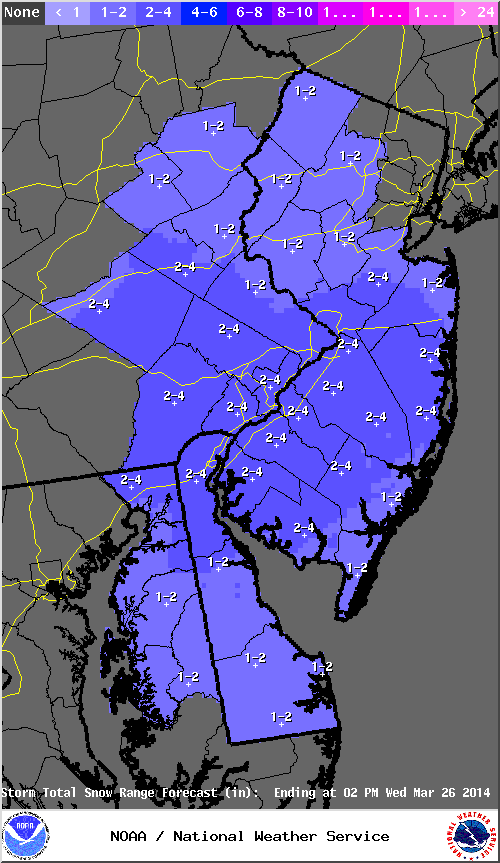 No snow, but it has been really wet here over the past few days!

2 to 4 inches of rain all over the state. 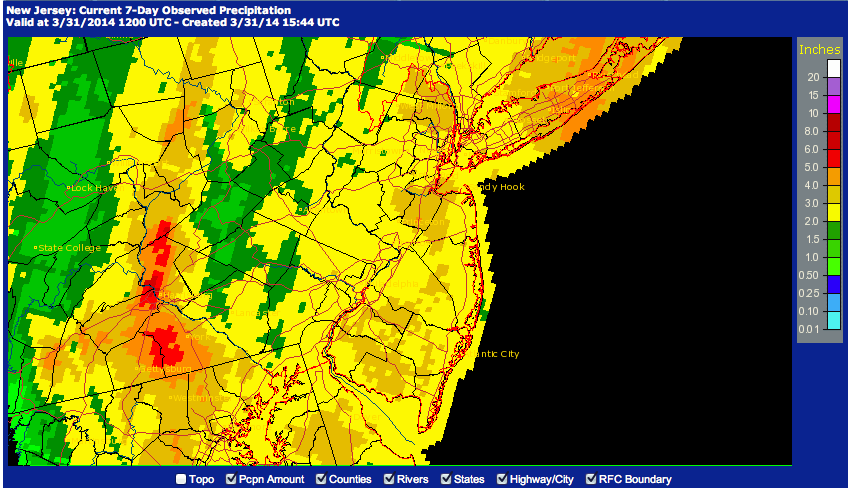