So, yesterday late afternoon (5:59 PM) just as I was about to leave the house, I received a private message from a member of this site telling me they found something that may interest me. Even though I was heading out the door I just had to stop everything and make this a priority. It turns out that while exploring the pines they came upon an old truck in a burn area that apparently had been hidden for years. Included in the message were the GPS coordinates. Since we were heading out today to stone search, I decided to visit the truck as well.

The truck appears to be between 1947 and 1954. My brother-in-law owns a 1950 and it was parked in my driveway for over a year. However, I am not an expert and while looking over the various years online I still can't decide what year it truly is. I have sent my brother-in-law a photo and tomorrow will get his opinion on this. Until then it is up to all of us. While there today I did not know where to find the serial numbers, but I did find some numbers that may help me out. As of yet I can't find online anything about the numbers I found.


The bell housing is still there but the transmission and many of the other important parts are gone. 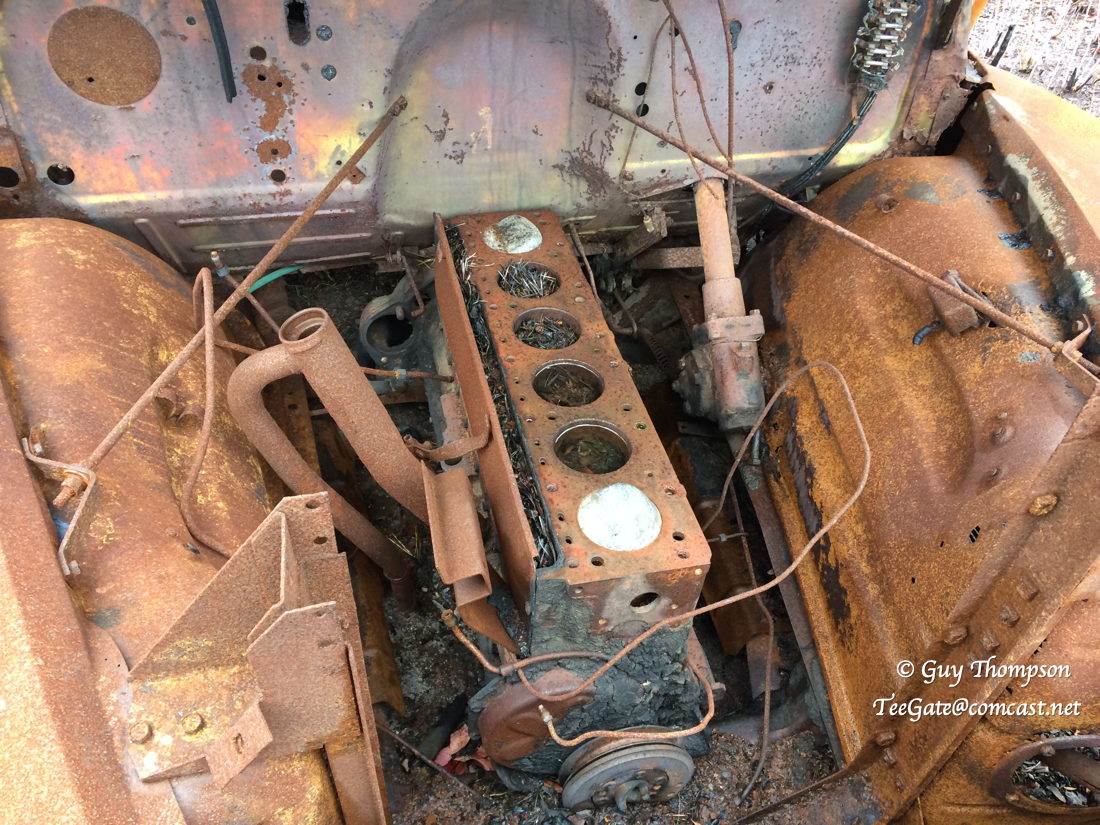 The windshield on this truck is unbelievably still intact. However, it is cracked. The car has sunk into the ground to the point the brake roters are almost covered. 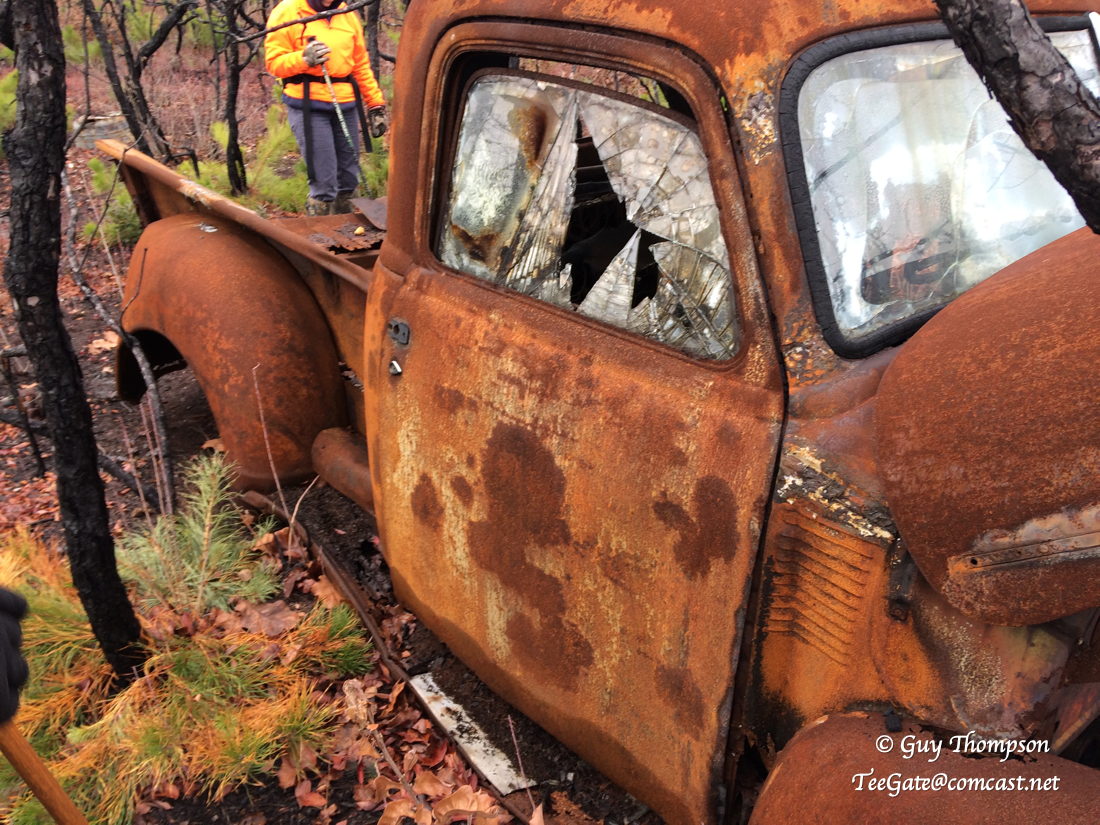 The front bumper is touching the ground but some of the chrome on the bumper is still intact. This vehicle has undoubtably been in a few fires over the years,, including the recent one that scorched the earth. 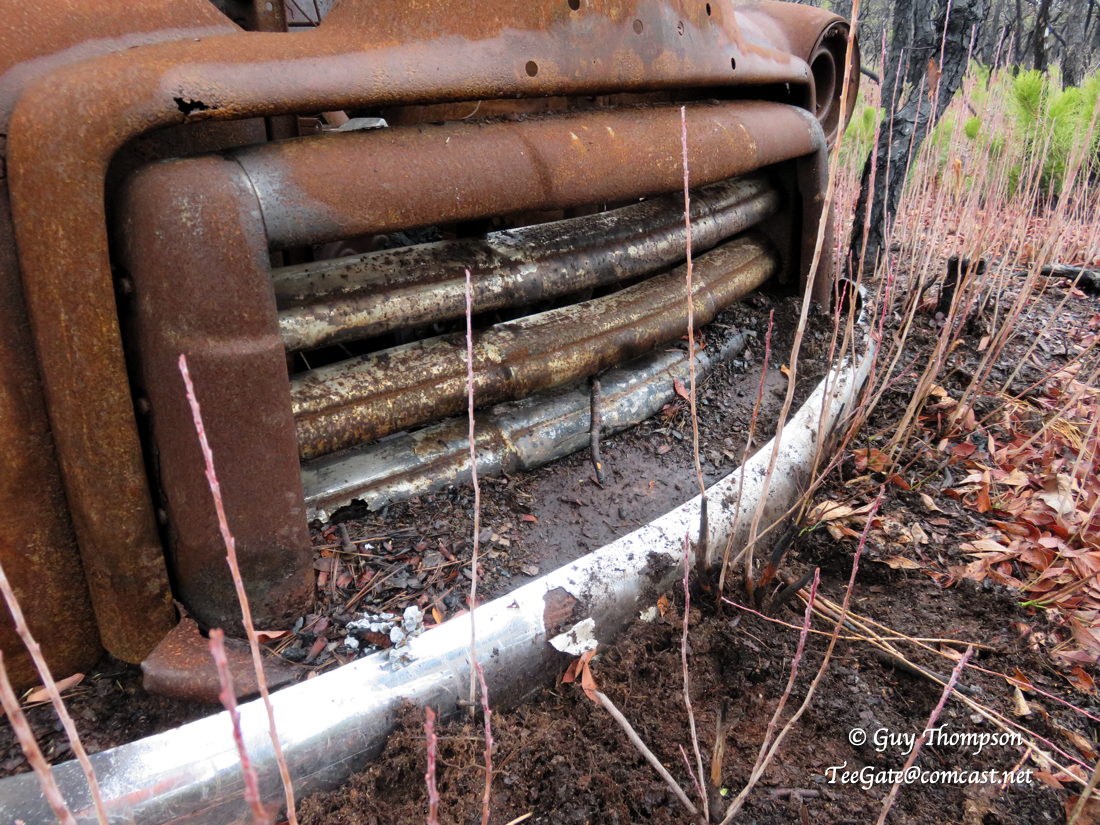 The interior has evidence that it was at one time red. 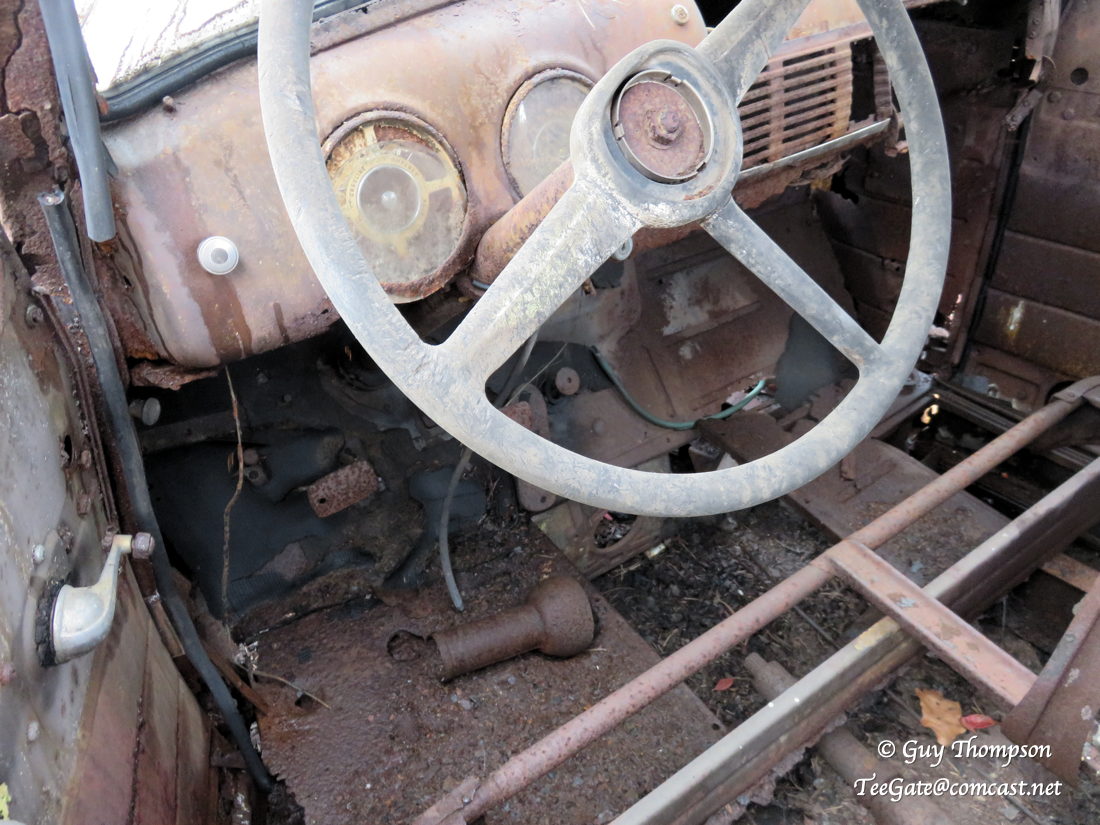 Part of the license plate is still there and a 1961 sticker is on it. If the sticker needed to be replaced every year this vehicle has been there most likely since at least 1962.

Guy, here is the one we discussed today. A Dodge, and very different. Check the front fenders.

Yes, there is a big difference. Here is a 1963 Ford I found years ago. 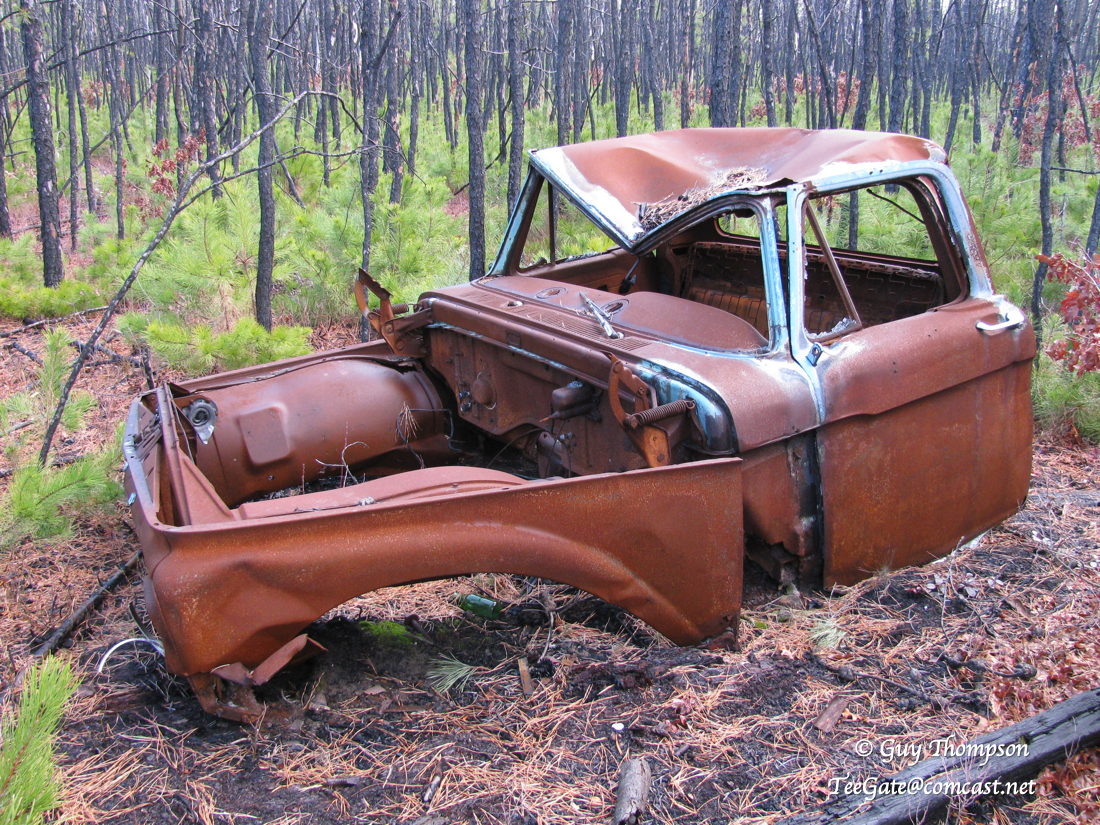 With a split window, it really narrows it down. Look at this 1950. 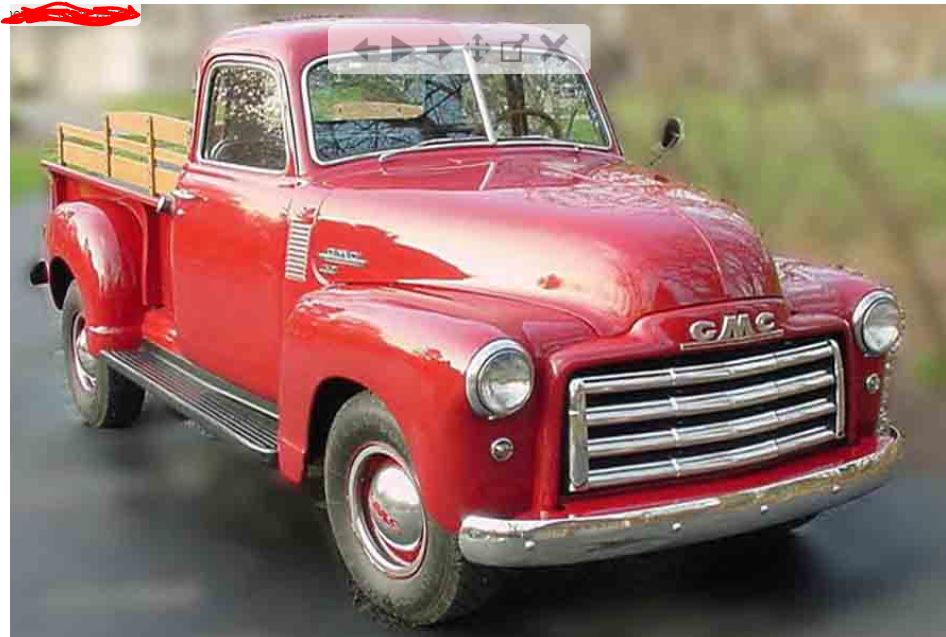 Yes, but the other years also have it.

However, that's not it completely though the year may still be correct. The truck in the photo has a 5 window cab (back has three windows). That would make it a deluxe model. The pine plains model only has one window in the back.

Teegate said:
Yes, but the other years also have it.
Click to expand...

No vents on the windows on the pineplains model. That may help narrow it too.

Yeah, my mind was conveniently ignoring the top steel bar.

What I find interesting is I don't see the gas filler on either side. The older models before 1950 appear to have it low on the passenger side behind the door, and the newer models have It higher up. This one does not have a filler. I suspect it was at the hole shown below. The arrow points to where it is in all of the photos online that I see. 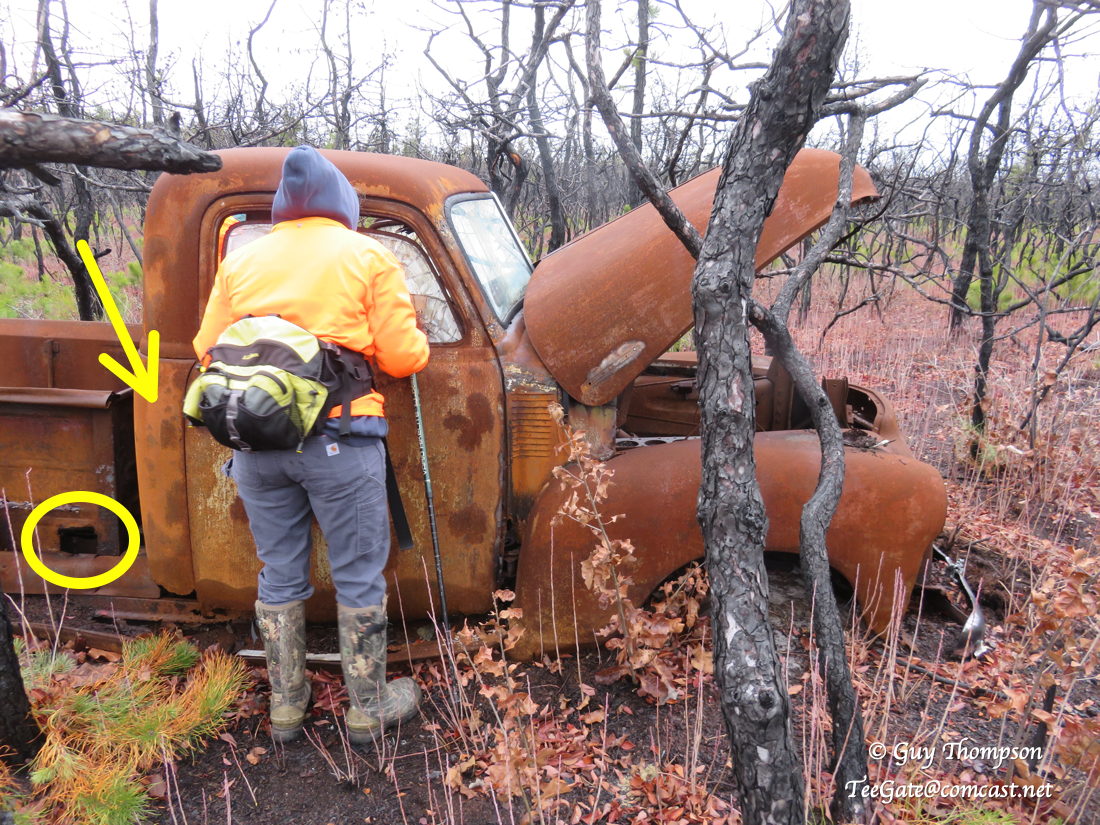 After a quick Google search, I would agree.

Guy, did you look on the drivers side door frame, engine side, for an id plate?
Last edited: Jan 1, 2020

I did not know where to look. I did see this under the hood on the drivers side firewall. I will go back soon and look more. 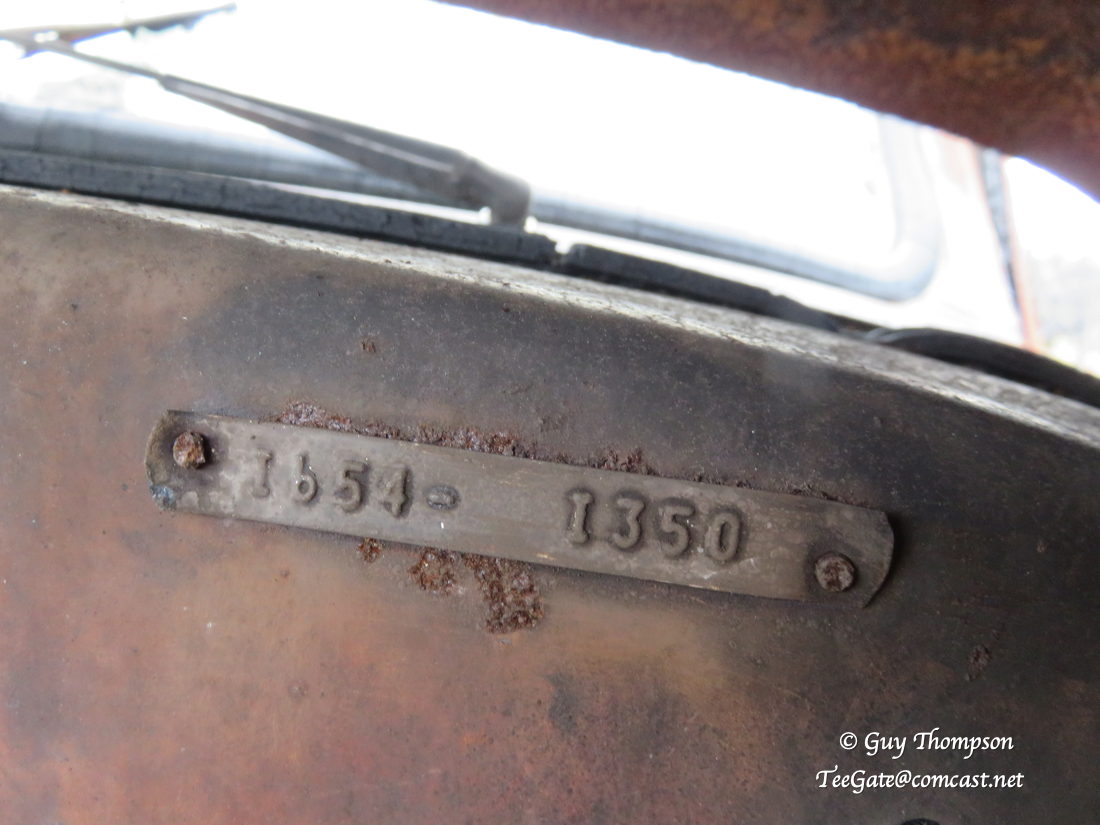 It might depend on the type of bed, short or long. This is a short. 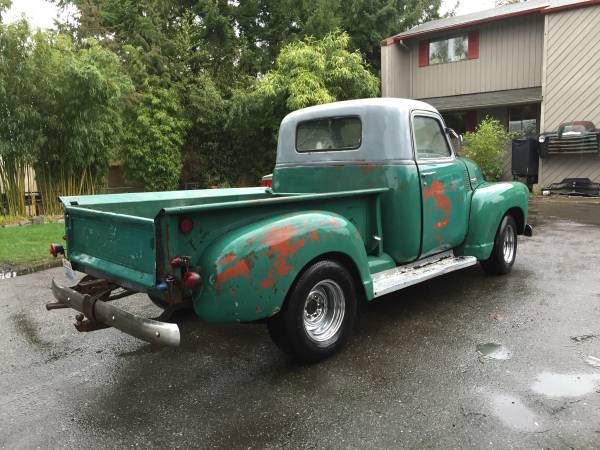 Someone restoring one could certainly use those body parts, they have a nice patina

I am familiar with this truck. I have flown over it.
According to legend, it was left by an individual collecting pine cones decades ago.
Reactions: Boyd

This is one way to find out. I don't think the data plate in Guy's pic is the one we need though. I'm betting its a 1948. Just have a feeling

Teegate said:
I did not know where to look. I did see this under the hood on the drivers side firewall. I will go back soon and look more.
Click to expand...

On a '48 Chevy, but I doubt it is still there, probably fell off;

Drivers side door hinge pillar will have the ID number. Also you should find it under the truck’s hood on the right side cowl.
Click to expand... 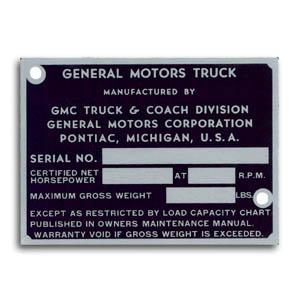 The plate you show is most likely the cab/body plate. Taking a guess, it is a 350 model PU.

My photo of the numbers was under the hood. I don't see anything in that chart that tells me about the car in comparison to the chart.

Teegate said:
My photo of the numbers was under the hood.
Click to expand...

On the firewall is where you mentioned. Logical place for a body/cab tab. The chart does show info of a model 350 for 1948 but that is an assumption on my part, may just be coincidence.
You must log in or register to reply here.
Share:
Facebook Twitter Reddit Pinterest Tumblr Email Link
Top Bottom