Looking at some of the historic maps here, Halberton doesn't appear on the 1884 USGS topo. Was this just a railroad stop for loading lumber and sand, or was there some kind of town here long ago?

[Edit]After scrolling through a few Google pages of auto insurance, singles and job listings for Halberton, I found this... very interesting: http://query.nytimes.com/mem/archive-free/pdf?_r=1&res=990CE3DA1231E033A25750C2A9649D94659ED7CF

it's where the old railroad grade crosses hunters mill road.definitely was a way station on the railroad at one time.about a half mile from the road there are ruins that appear to have possibly been a station for the railroad.any house ruins have obviously been destroyed by the later gravel operations.some nice stones out in that area if your into that

the area is not pretty wild with most of it private property excluding the railroad grade which is state and a few small patches of state land up and down the road.
Al

Thank you Boyd for the information!

Thanks Al, I kinda thought you would have some wisdom to share on this topic.

You are right, it looks like there's only a strip of public land there. Here's the data I have on public open space in that area (shown in green).

Al and I did quite a bit of stone searching around there. One was the knee stone that Al crashed into

We have the survey map of that strip of land if I remember correctly. Al and I spent quite a bit of time in that area.

Before the modern state of Israel was born, to many of the Jewish faith the New Jersey Pine Barrens was to become the Promised Land. By the Fall of 1882, a year after Tsar Alexander II was assassinated in Imperial Russia, the agricultural colonies of Alliance (below Brotmanville) and Burbridge Village (spanning Weymouth Township & Estell Manor City) were founded for the benefit of pogrom refugees. Ten years hence, other Pinelands colonies were started as extensions to the New York and Philadelphia rag or “schemata” trade. These agrarian villages were strung along newly erected railroad lines crossing the wilds of Cape May, Atlantic, Cumberland and Gloucester Counties. For the colonists’ added benefit rug mills, button factories, and clothing shops were erected to supplement anticipated income from agricultural-land pursuits.

Halburton is but one of about seventeen Jewish settlements established in the area, all part of a railroad-related real estate boom that was truncated by the Panic of 1893. This community at its height boasted a paint factory (Muskee Paint & Varnish), a livery stable, a store, a lumberyard, a butcher store, possibly a church, and a post office. By 1902 the economically bankrupt Halburton was abandoned, its structures dismantled and removed to Belleplain. Other all-but-forgotten Jewish Pineland settlements included Ariel-in-the-Pines/Sons of Israel, Edwina, Hebron, Lebanon/Jewtown, Mannington Heights, Mizpah, Montiefore, Ormand, Reega, Rotham, Royalton, Ruskville, Thelma, Woodbine, and Ziontown.


Demitroff M. 2002. Origins of the Jewish community in southern New Jersey. In It’s a Mitzvah!: Jewish Life in the Delaware Valley. DVD documentary presentation by WHYY, narrated by Larry Kane.

immediately north of the tracks huh?there may be hope for some foundations I've missed.most of the gravel pit operations are south of the tracks.old cape may avenue is several miles northeast of halburton,this cape may avenue I'm unfamiliar with,perhaps just a small local street.the way to cape may would have been down the tracks,this is even pre Al Alberts time here

On one of my solo trips out there looking for stones I found a concrete structure that to my untrained eye looks like it might have been the remnants of a station.it's perhaps a half mile northwest of the rr track junction with hunters mill road.you have to scramble up the grade itself and ignore the cycle trail that crisscrosses the tracks and is easier to follow.if you stay in the obvious(at this point) ditch you will find it.I can just about pinpoint it on an aerial for you if you like.
Al

That is some fascinating info Mark - thanks! I was aware of a few of the colonies you mentioned. I have a book, "Pinelands Folklife" (Rutgers, 1987) that devotes a few pages to them and mentions Alliance, Rosenhayn, Norma, Carmel, Mizpah and Woodbine (pp215-217).

That map is fascinating. Are those impressive looking Victorian homes something which only existed in the mind of the real estate developer as opposed to actual buildings?

If you'd like to "explore" that area, here is a .kmz file of about a 1 square mile roughly centered on Halberton from the NJ 2007 aerial imagery at the full native resolution of 1 foot per pixel (this is the same data you will see with NJPB LiveMaps, but you can zoom in much farther). This file will open in Google Earth, and it will also work on the Oregon, Dakota and Colorado GPS'es.

Clicking on this link in Firefox on the PC asks if I want to download the file. In Safari on the Mac, it's a little trickier. Safari recognizes it as a .zip file (which is what .kmz files are) and wants to turn it into a folder full of jpeg's. The trick seems to be going to your Safari preferences and un-checking the box which says "open safe files after downloading". Then you will end up with a file named halberton.kmz.zip after the download. Remove the .zip from the end so that you have halberton.kmz. Double-clicking this file should cause it to open in Google Earth.

I have been wandering around this area a bit recently and wanted to do a brief followup. I didn't bring a camera - I may return and take a few pictures later. But look at the high resolution LIDAR image below (click to zoom in) - it might provide some clues about Halberton. Note the rectangular depression in the pink circle. This is the ruin of some sort of factory (or maybe the train station that Al mentioned above?). There are lots of bricks scattered all over the area, a sizable cellar hole and the remains of a part of the foundation with four large threaded rods sticking up, like the sawmill ruins that Guy has written about. Unfortunately there is also trash strewn around the general area, including a large number of old tires.

Now if you look closely at the triangle to the East of the Hunters Mill/Seashore Line intersection you'll see several other "craters" that could be cellar holes. There's also another hole on the South side of the railroad, roughly opposite the one I have circled. I have not explored these yet - winter would be better because things are very overgrown now and the ticks are just terrible.

But this is an interesting area, and the Seashore Line Trail (part of the Belleplain trail system) makes for a nice hike. Notice the "canyon" that the trail passes through roughly in the center of the image. It's a strange place, evidently an old sand pit that's now heavily overgrown with fair sized pine trees. Following the trail to the Northwest you then come to an area that has recently been cleared, probably by the state - this is part of Belleplain (see the map of state land I posted above).

As posted earlier, much of this area is private, so use common sense and don't trespass. 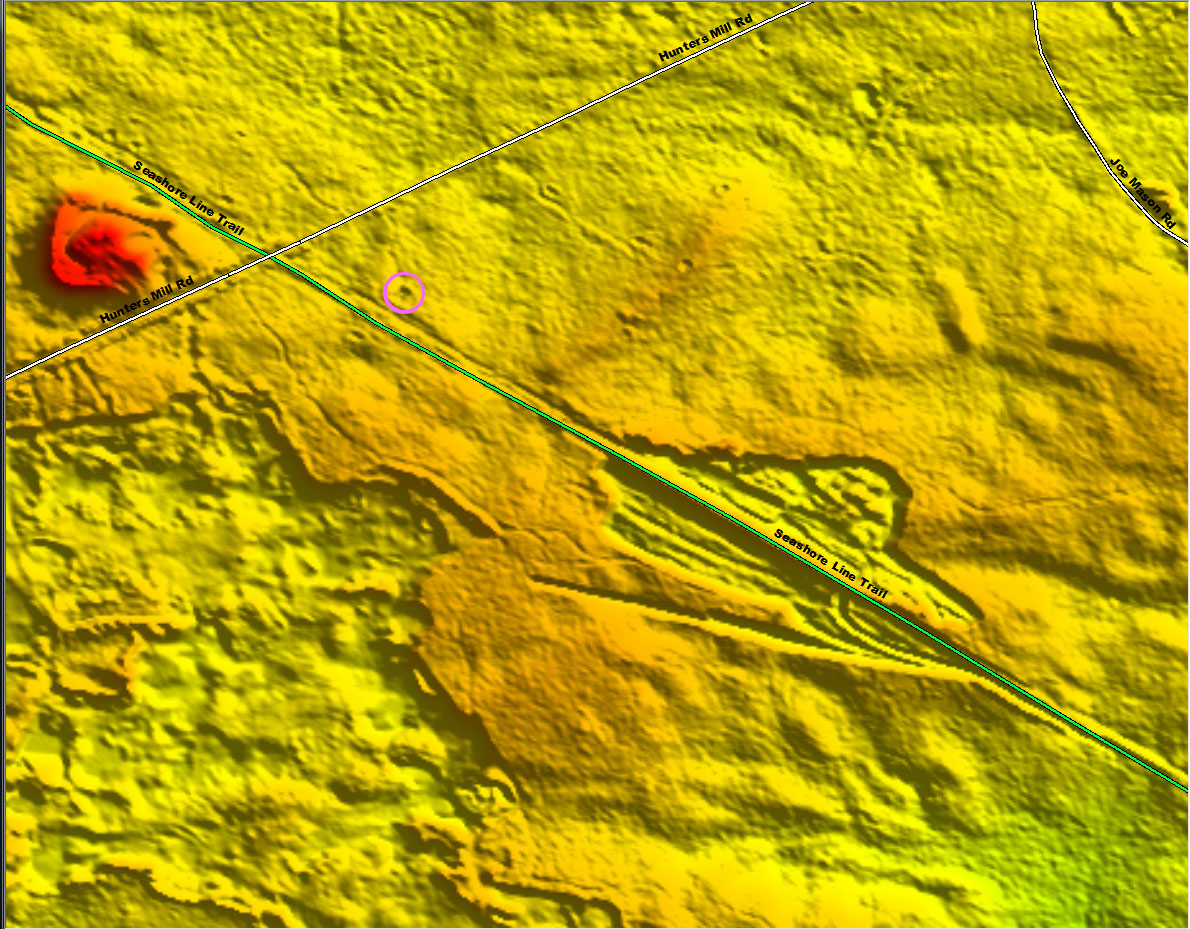 That is not the ruin I mentioned though i have been to the one you show.My ruin is on the other side of the tracks and on the other side of the road.It is along the south side of the grade and (tracks no longer there) and west of hunters mill road.Probably about a quarter mile or so west of the road and down in a depression that had hidden it from me on walks up the trail that follows the grade.I was headed cross country to intersect the grade trail when I just happened to intersect it at the ruin.

Does this show the other ruin? The sand company has torn that area up a lot.

After looking at the aerials and trying to recollect my route that day I'd say it's about here 39.30213° N 74.92169° W which makes it closer to a mile west of the road.I know it was west of the trail heading south from the grade visible on the black and whites.move your lidar about this distance to the nw again and you should have it in the image.it was right next to the grade and probably right next to the actual tracks when they were there.

39.30466° N 74.92562° W actually upon more thought it was about here because i approached the grade on the small trail just west of this spot visible in the aerials and upon turning right and heading down track I wandered into it.

It looks like an interesting place to explore. You have quite a few months to wait though.

Thanks Al - here's the spot. But I think that's pretty far from Halberton.

Guy, you are right about that! I wonder if we will actually have a winter this year? 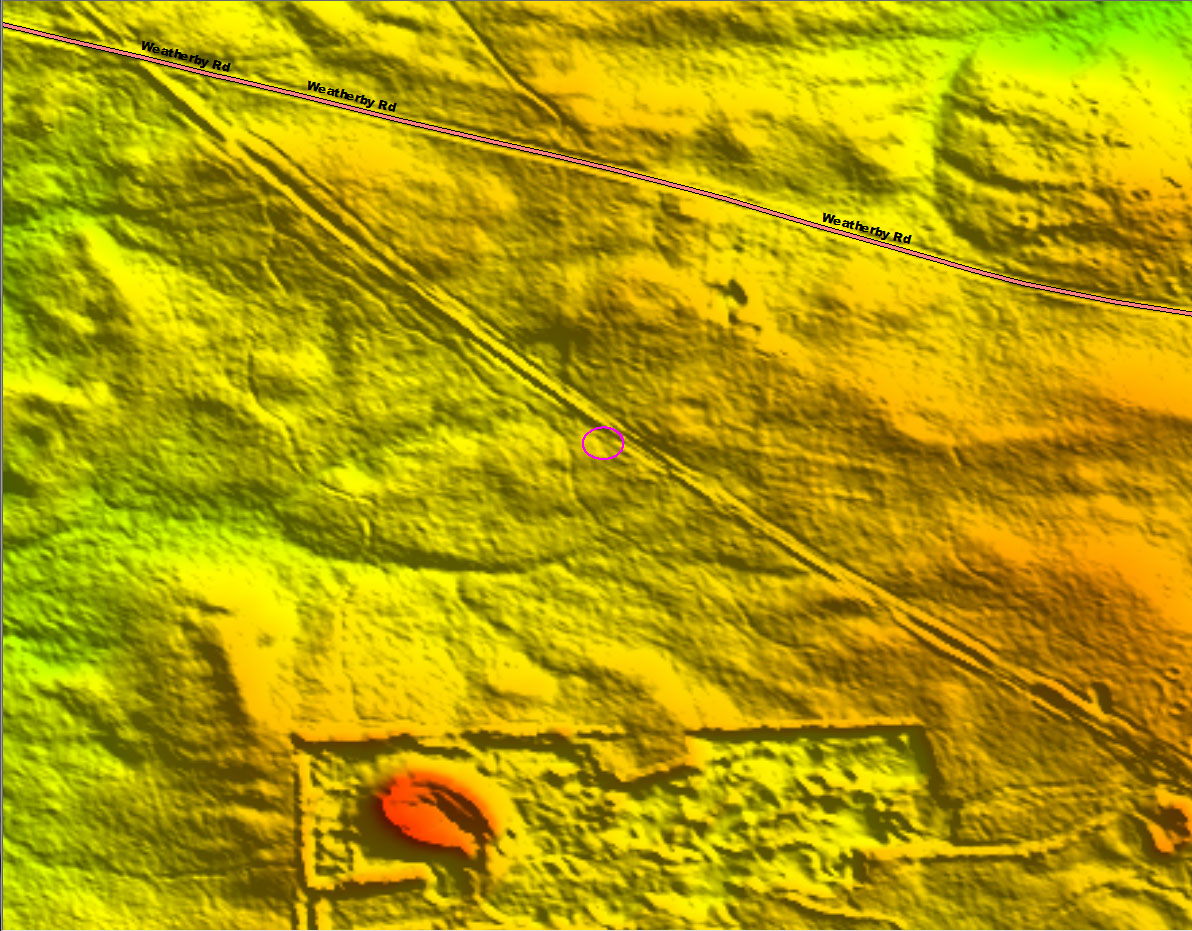