I had an interesting adventure today. I hope you enjoy.

Back in December of 2010 the members of PBX were plowing through the "Springer's Savannas and Spungs of Shamong" hike, and during one of the breaks I made a short side trip to look for a property stone. I make it a point while on a hike with others to not effect the hike in any way, so I rushed to find the stone and make my way back as quickly as possible. It was uneventful as I found the stone and returned.

Fast forward to a few months ago, I was looking over information transcribed from old deeds, and the words "Herd Cabin" was written. Here is what it said.

Beginning at a stone standing 6 feet East of a Well at a place called Herd's Cabin, which said place is between and near the forks of Atamgain and unknown branches.........

Looking over the rest of the deed I used the information to compare to what I know and realized I had been at the stone on the PBX hike. However, in my rush I somehow missed a well 6 feet away. I dug a little deeper into my files and found this.

Beginning at a stone at Herd's Cabin about 6 feet East of Mill (should have said Well not Mill) on a high point of land in the forks of Atawaquam ( differs from Atamgain above) and unknown branches.....

And the info finishes with this. North forty-five minutes East forty-six chains to a stone standing fifty-five links (36.3 feet) East of the beginning; thence due West fifty-fife links to the beginning.

That last line tells us that 36.3 feet due East of the stone I found is another one. So there was a Well to find and another stone, so I prepared myself for a day when I would be alone and sat back and waited. As with last week Jessica has a busy Monday at work and decided to not go out with me today, and I realized my chance had arrived and I was ready.

There were various ways to get there such as retracing the PBX hike, coming in from East Stokes Road, or making a longer and possibly more challenging bushwhack from Deep Run on Hampton Road. I chose the latter. So early this morning I headed into the woods passing by the ruins of the former residence of James McGinn. 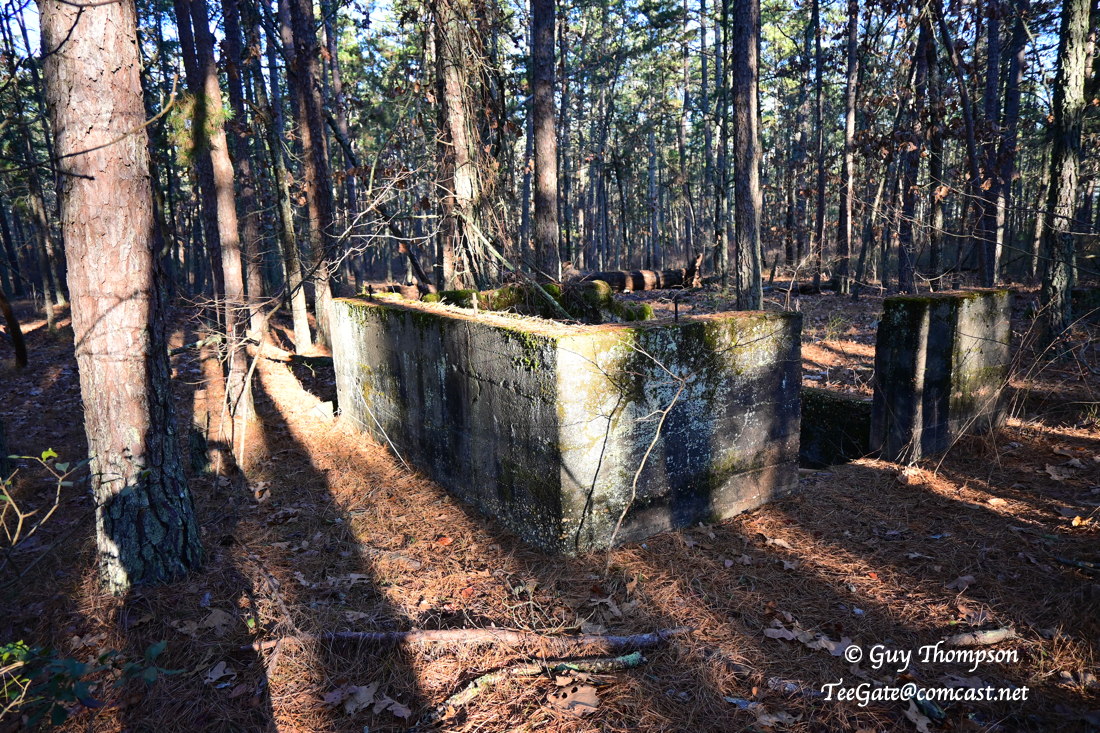 Once I entered the more dense sections of the woods the briers were terrible. But I was able to make small adjustments and find breaks. Early on I ran into hunters stands with feed and camera's, but eventually it was wild country.

The hunter has me coming and going on that camera, plus a few mug shots. I did not moon him like at least one other person did on our PBX hike. 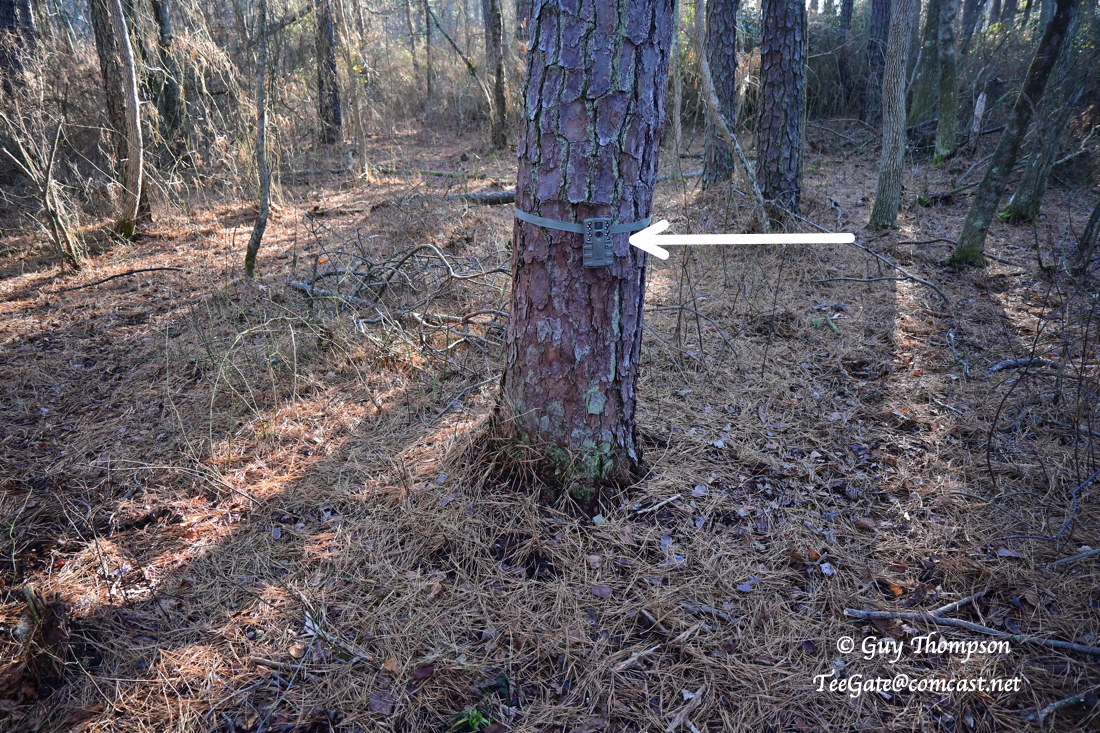 After a long struggle I finally made it to the Savanah at the below link. If you ever wondered what it looks like, now you know. 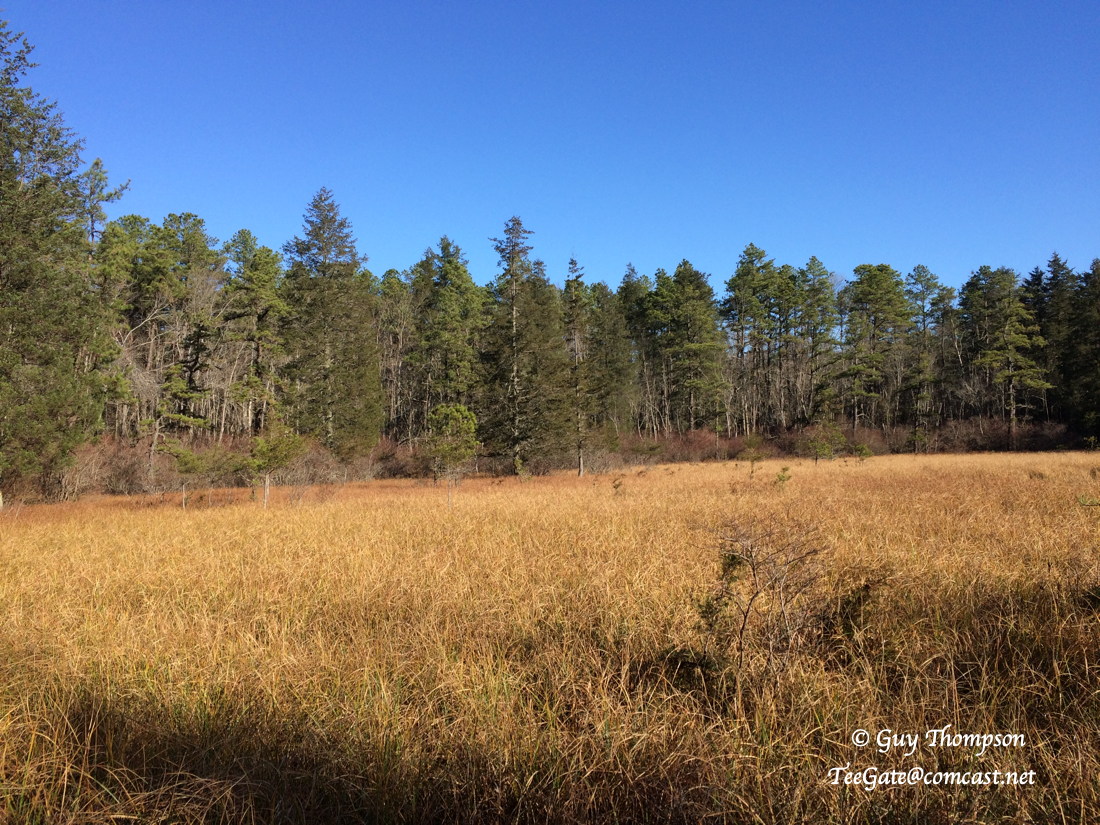 Next came the Bard Branch. I was concerned about this but in the end it was just a wide slow moving 8 inch maximum depth mess. 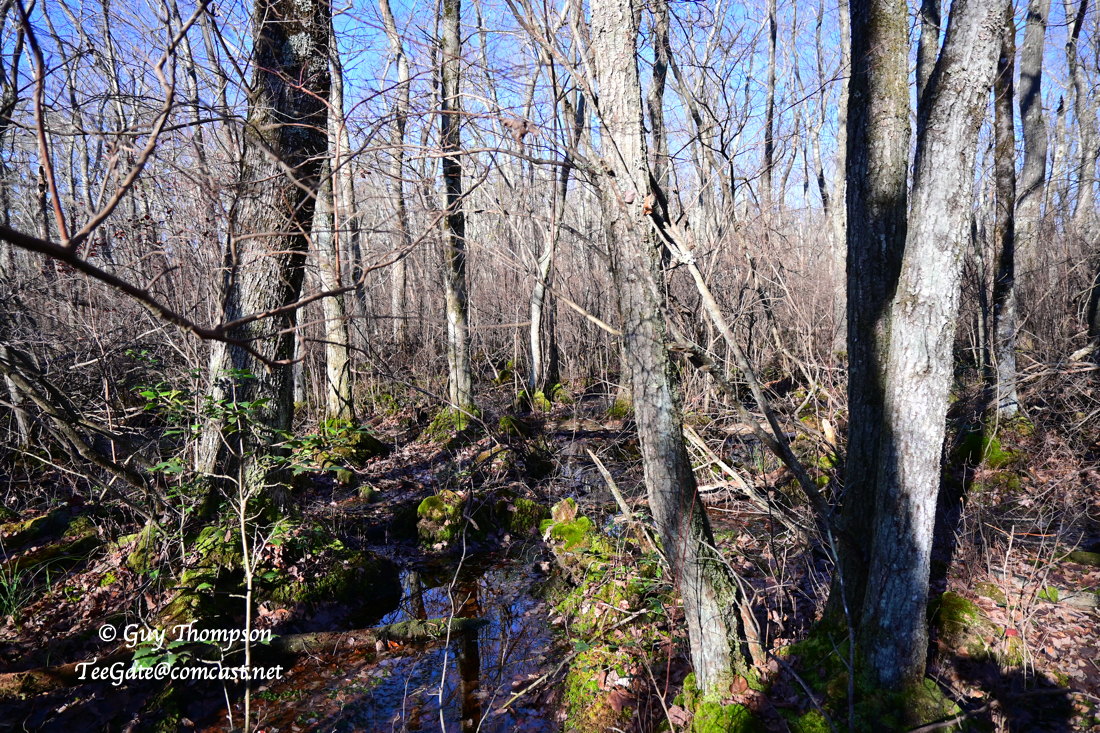 Then came the canal which I also worried about. There was no way I could cross where I came upon it, but looking south I saw a branch across it. I climbed on it, stretched as far as I could to grab a branch on the other side, let go of the branch on the side I was on, and promptly one leg slipped off and I was knee deep in water sitting on my ass on the branch. A quick tug and I was able to stand up and get across. 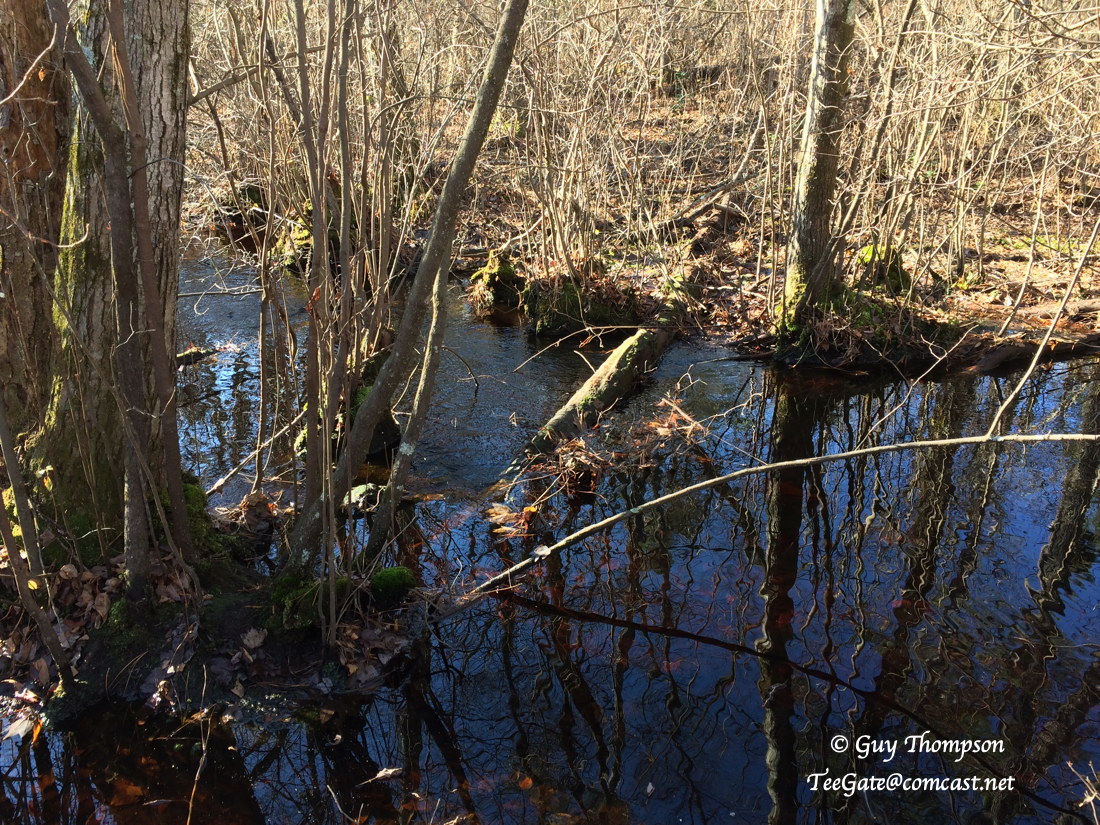 Then came the short climb up to the "high point of land" mentioned in the deed, and I was there. Pushing through the brier I eventually came to the stone I visited 10 years ago. Here it is today. 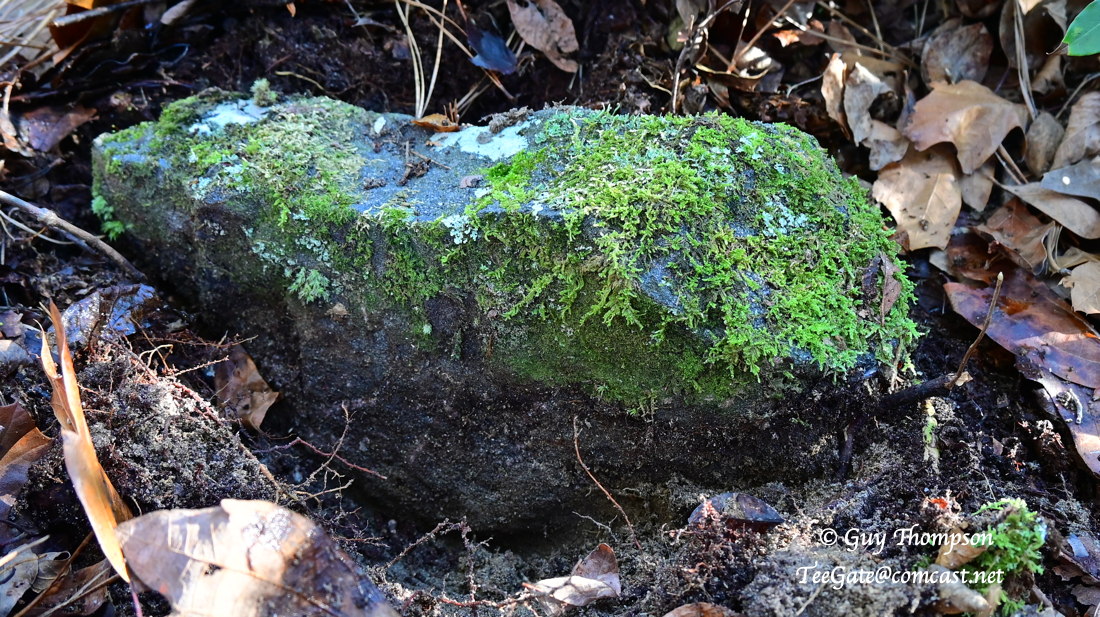 And sure enough I was correct, and had made it to Herd's Cabin. Here is the well 6 feet away. How I missed this is impossible to explain.

The arrows point to the stone, and the well is at the bottom of the photo. 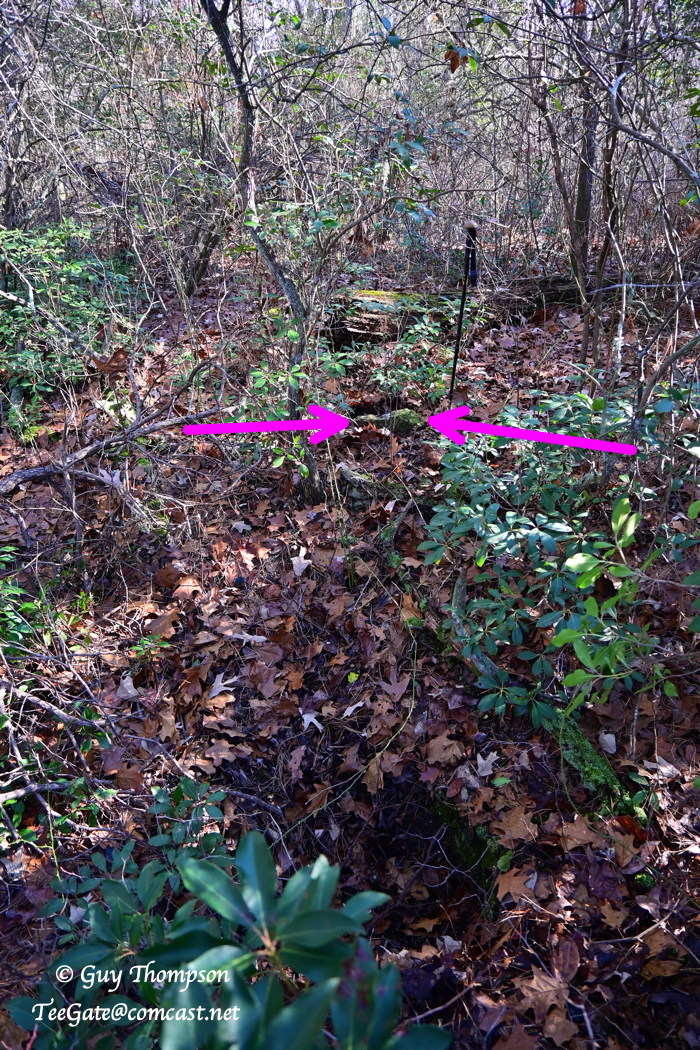 So I still had to find the stone 36 feet away. Walking directly East I calculated where 36 feet was and set down and started poking. Nothing ... very frustrating. But in an instant I looked down beside me and saw this. 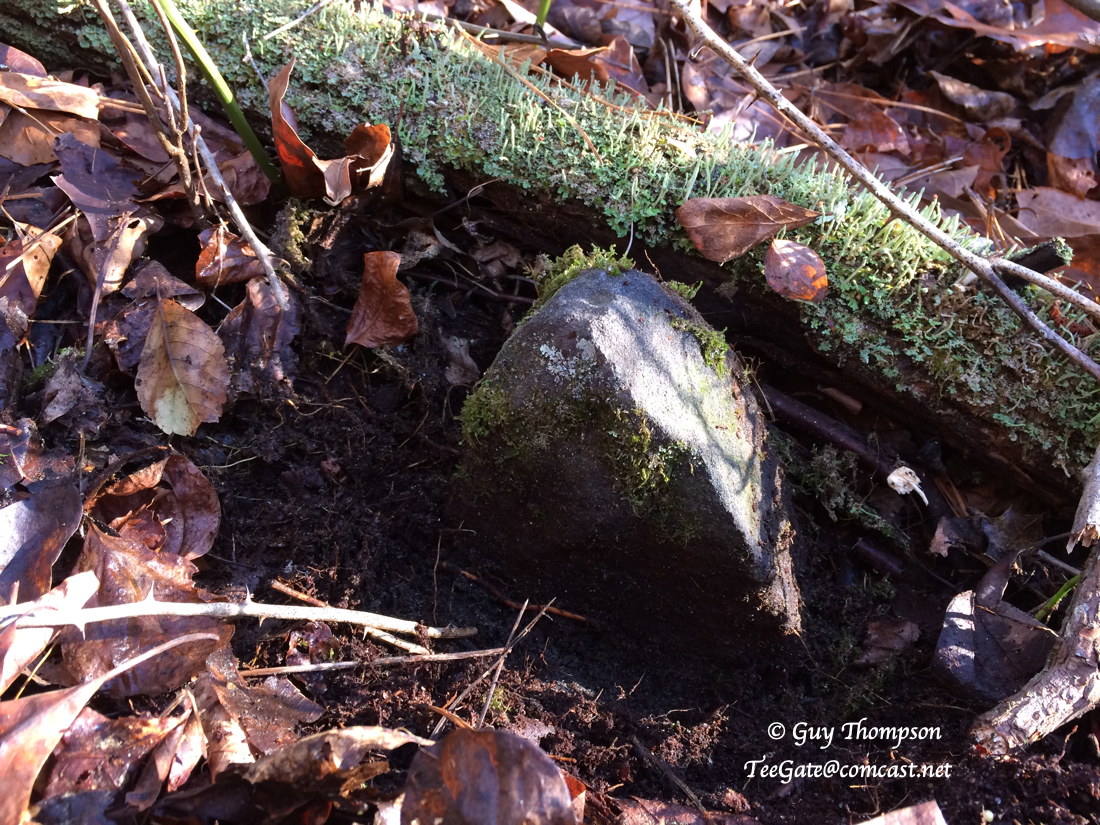 Having found Herd's Cabin, or the "area" of Herd's cabin as one deed says, I am quite certain this dates back far into the 1800's since the 1930 aerials show nothing. And the intersection of the Atamgain or Atawaquam is most certainly the present intersection of Springer's Brook and the unnamed branch is Bard Branch.

The canal I crossed can be viewed here going North and South.

Having found Herd's Cabin I sat there a while thinking of the long walk back. The time was 11:05AM. I had been so interested in what I was doing I had missed this laying right there. 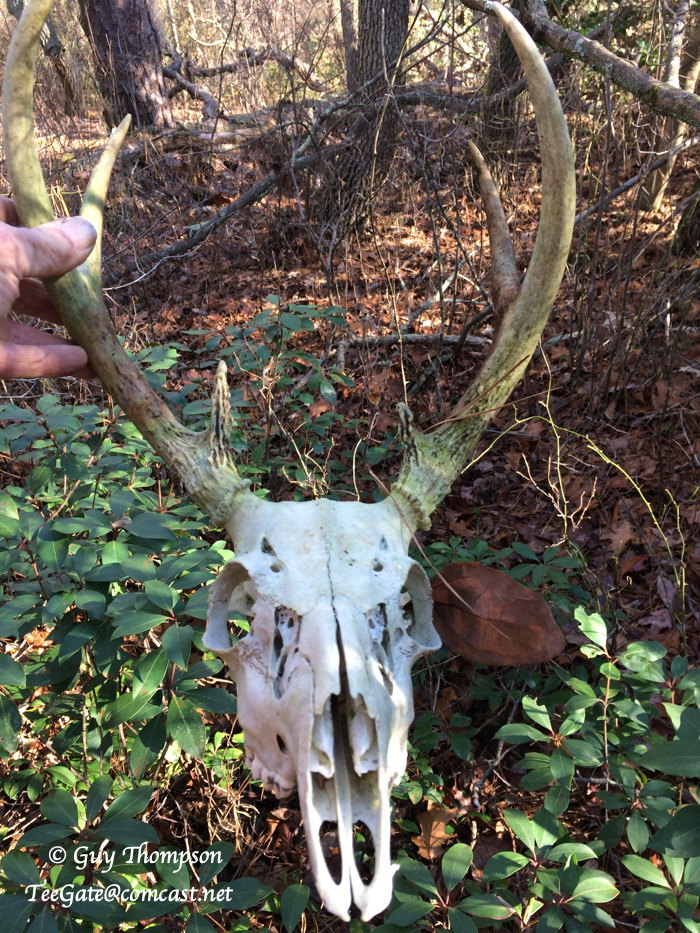 On the way back I was able to follow my GPS, and almost 1 hour later I was at my car.

Here are my tracks minus the location of Herd's Cabin. The curve at Deep Run on Hampton Road is at the bottom right. I would suggest nobody do what I did. It was a tough one. 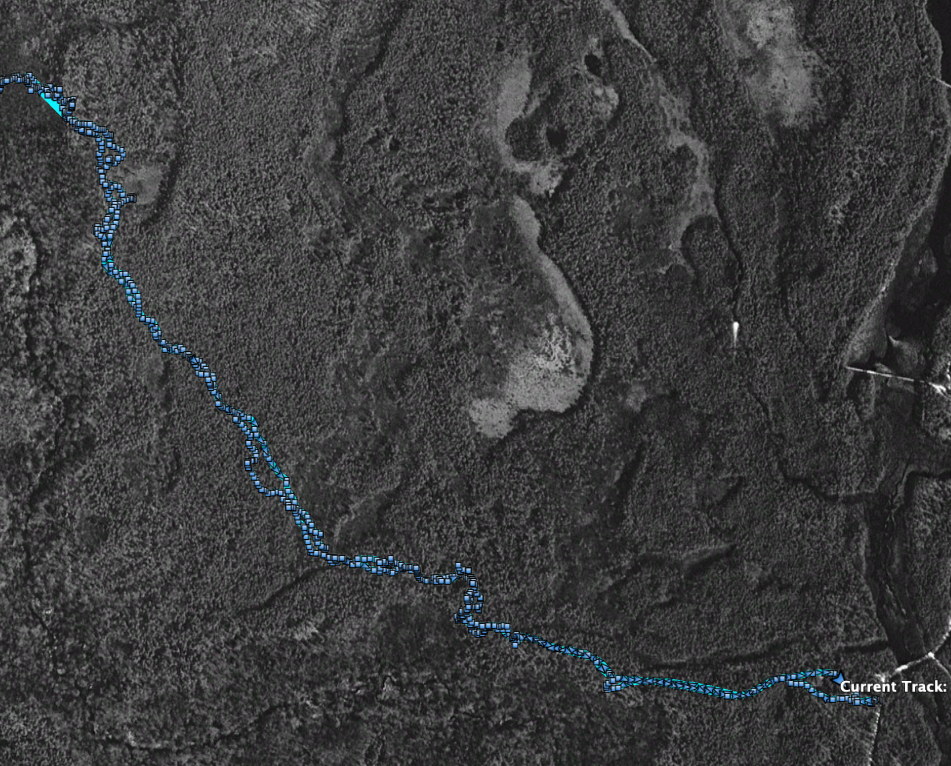 I want to thank Bob for his concerns by calling Jessica to see if I was okay. Both of them had my back and I appreciate it. 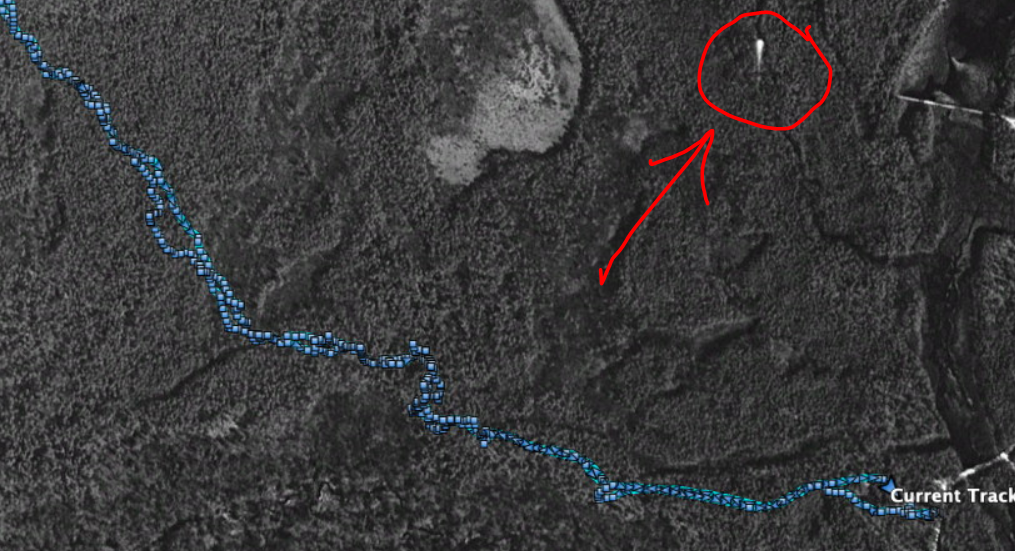 Oh Okay. I was really confused. Now I am not.

Teegate said:
Oh Okay. I was really confused. Now I am not.

OK, now the rest of us are,

The lightbulb is an artifact on the 95 aerial. Jess, Guy, and I went out there to make sure it was not something else. There was nothing else. The way back was horrible briar, a walk in hell.

The hotspot followed by a streak suggests that it was a bright (or reflective) moving object. It is even more vivid on the infrared imagery. Maybe another airplane below.... or a UFO sighting?

Or a meteorite.
Reactions: Boyd

bobpbx said:
The lightbulb is an artifact on the 95 aerial. Jess, Guy, and I went out there to make sure it was not something else. There was nothing else. The way back was horrible briar, a walk in hell.
Click to expand...

. Unfortunately, you guys found out the hard way, but you "had" to know, I would have also.

On the way to Atsion yesterday I saw something coming towards my windshield and then a loud bang, and I suddenly had bird feathers and liquid on my windshield. I think I killed it. 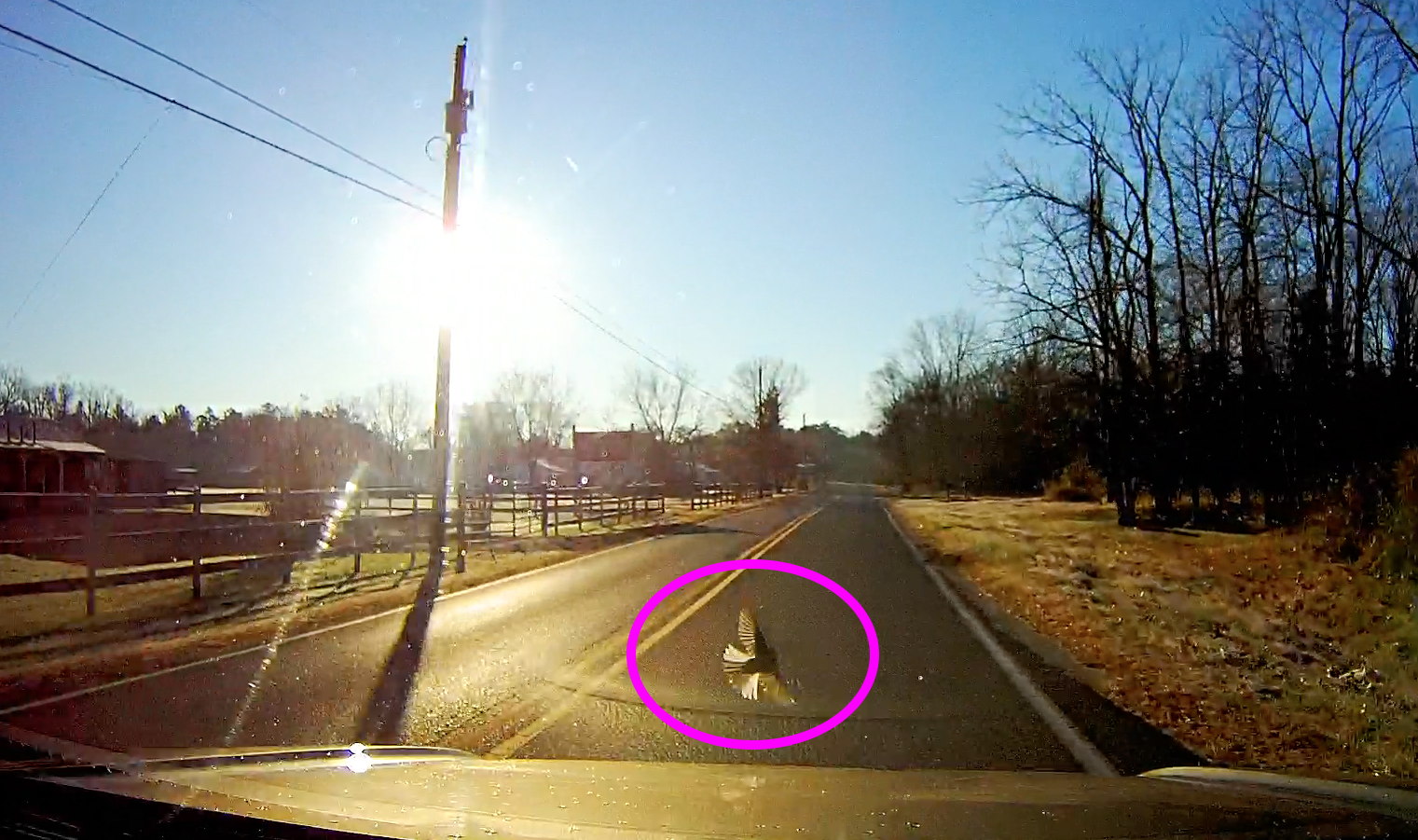 Very, very interesting post Guy. Really cool that the well was still there. The find raises many questions. I wonder who Herd was and why he had a cabin there. I found a few other references to old cabins in the pines including one near Penn Swamp dating to the 1700s.

Incidentally, the Unknown Branch mentioned in your deed description is a proper name and should have been capitalized in the indenture.
Reactions: Teegate

I actually don't have the old deeds as I mentioned. I only have transcribed text from the old deed used in a newer one. So the original may have.

The well has collapsed and the ground all around it is filling it in. I could see the shape of the well and dug out some of the leaves to see it better.

A better view of the collapsing area around it. Click to make bigger. 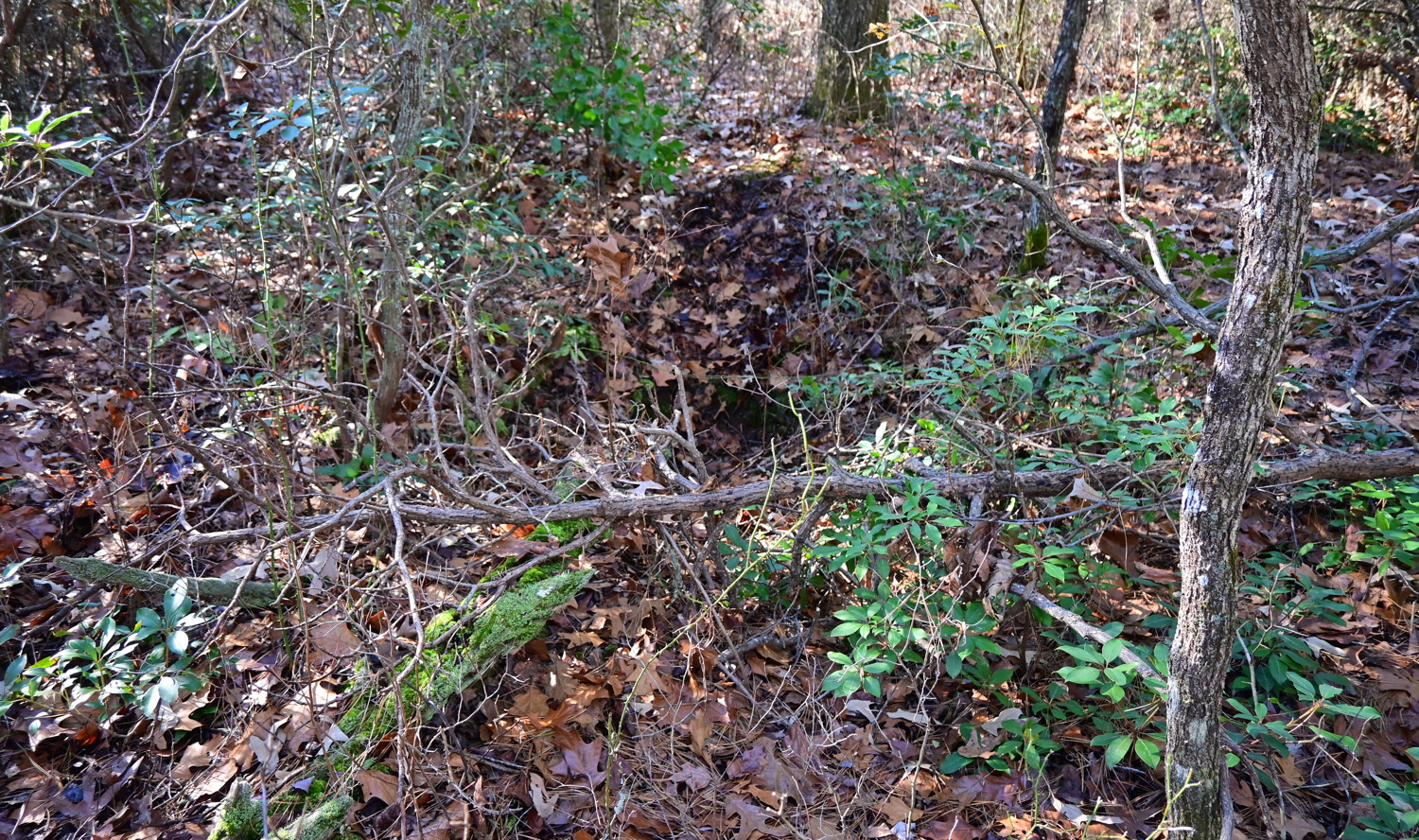 did the well have brick walls?or maybe shored up with wood which rotted and allowed the collpase?

I did not find any brick. However, the complete top was collapsing so they may have fallen in. I only removed the leaves and checked. I will get back there one day.
Reactions: manumuskin

manumuskin said:
did the well have brick walls?or maybe shored up with wood which rotted and allowed the collpase?
Click to expand...

The well is mentioned in an 1810 deed so the locale goes back at least that far. One of the indentures I looked at mentions Reeve's Stone Island nearby. This was surely an outcrop of ironstone (sandstone). My guess is that the well must have been lined with this readily available material. This is just speculation, of course. I suppose we will have to wait until Guy's next visit to find out for sure!

Thanks for sharing your find Teegate.
Reactions: manumuskin

Thanks for the 1810 deed info. I was certain it was old. I also saw the Reeves stone island but as far as I can tell using the info I have is that is closer to East Stokes road. I have a deed there that mentions it. I will look that over more closely.

I have other stones to look for north of there but again will have to do it when it is just me. We tried about a month ago but Jessica does not like how close we have to come to private property to get there, even though we are on state land. She balked and we left. I can come south and visit the well again when I go.
Reactions: manumuskin

Teegate said:
Thanks for the 1810 deed info. I was certain it was old. I also saw the Reeves stone island but as far as I can tell using the info I have is that is closer to East Stokes road. I have a deed there that mentions it. I will look that over more closely.

I have other stones to look for north of there but again will have to do it when it is just me. We tried about a month ago but Jessica does not like how close we have to come to private property to get there, even though we are on state land. She balked and we left. I can come south and visit the well again when I go.
Click to expand...

I am not afeared of private property! and I have weekends off now!

The deed I have has some issues and must have a mistake in it so I still am unsure of where the Reeves stone island is exactly. But if the deed is fairly correct I have it here in the bog or north of it near that building. I will continue to work on trying to find the mistake and correct it.

Update: The mistake was on my end. The deed said minutes on two courses and I used degrees. After running it again and going all 13 courses I made it back to the stone within 50 feet. Since the calculations are from the beginning to course 3 which is Reeves, I am within feet.

So it says, "to a pine on the south side of a stone island, called Reeves Island."

This is the exact spot, so Reeves Stone Island is all the the area just above this point. I bet that building is on the island.

The Lidar shows it. It is right above the building.