The Army Corp of Engineers...

is at it again. This time a massive project, with much of it within the Pineland Reserve. I attended a public meeting about it. It appears to me, they are recommending turning NJ into another Netherlands. Three terms were bantered about; levee's, floodwall's, and storm surge barrier's, but the diagrams they presented really drove it home and are down right frightening, primarily for what it will cost and the damage it will do. They have talked about this before, primarily for the NY bight, now it has expanded to the entire coast.

An example of a storm surge barrier for the Cape May canal, 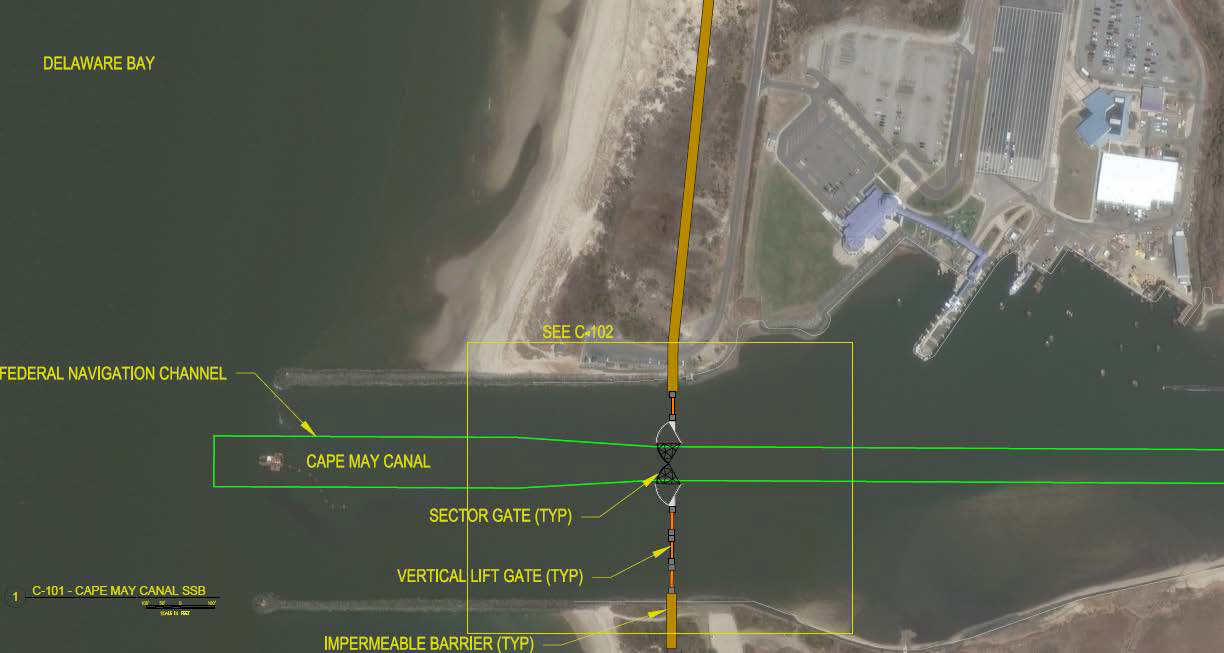 The presentation, it's a long read. Enjoy. If you can make a public meeting, try to go. Bring a big bag of popcorn.

I do not have time now to read or listen to the entire report but...

My grandparents and later my mother had a home near the Inland Waterway in Ventnor from the 1920's until the 2003. Buffalo Ave often flooded and at times salt water came into the lower garage utility area of the house. I would not be in favor of paying one cent for protecting the homes on Absecon Island. If you live ON the water, you are going to be living IN the water during storm tides. If you don't like it, then live inland.

And my recollection of reading numerous articles about the stone jetty's built by the Army Corp of Engineers on the beaches around the island is that the stone jetty's contributed greatly to beach erosion instead of preventing it. Climate change is going to further raise sea level, not lower it. Put the money into preventing further global warming, not mitigating an historically insoluble problem by spending billions of additional dollars trying to hold back the Atlantic Ocean.
Reactions: old jersey girl and bobpbx

The Forsythe NWR manager could not believe that this plan has gone this far without the Corp speaking with stake holders first. Lot of taxpayer money went into developing it, but it gave the Corp something to do.

One of their fiasco's in Barnegat Inlet. It has all now washed away. I looked up the USACE.

They are a federal agency under the Department of Defense with 37,000 employees. Their mission statement is "Deliver vital public and military engineering services; partnering in peace and war to strengthen our Nation's security, energize the economy and reduce risks from disasters and destroy the beaches of NJ while squandering untold billions of tax payer dollars".

I may have added that last part.
Reactions: John, 1Jerseydevil, Broke Jeep Joe and 1 other person

Jon Holcombe said:
I may have added that last part.
Click to expand...

Exactly as Jon said; engineering the beaches is a futlile waste of money. A modest proposal: make flood insurance in areas on the coast available ONLY for a primary residence, not a secondary or vacation home. Instead of spending taxpayer money on "beach preservation", give money to those taxpayers who live at the coast to relocate or elevate their houses.

I spent summers at the shore 1950-2014 at places on the "seven mile beach" barrier island, Stone Harbor-Avalon. The southern end at Hereford Inlet has moved constantly. A few decades ago an enormous bulkhead was built there facing the ocean, reinforced by big granite boulders in front. The uneven rock surface was supposed to break up the waves and protect the bulkhead.
After a big fall notheaster I went out there to see the damage. Boulders were scattered; The last piece of the bulkhead was hanging from the end piling, held only by the remaining steel cable that had linked the sections together. Each incoming wave moved the remaing piece back and forth, flexing the cable.
Stewart Farrell has been warning various government agencies for years about the futility of hardscape barriers versus the kinetic energy in cubic volumes of water. This combined with rising sea levels means that the efforts to restrain the ocean are useless. Engineering can redirect the flow, not stop it. See the Netherlands.
Protecting the offshore communities is largely driven by real estate entities selling to the affluent who seek status properties, and the seasonal businesses at the shore.
Developement continues, older residences are razed to build enormous houses which cover the entire property. In Cape May county, only route 9 will be dry when we finally get a direct hit from a major hurricane, and complete evacuation along the causeways when seasonal population peaks is not possible.
Gonna be real interesting.

I just finished reading "Everglades, River of Grass" by Marjory Stoneman Douglas. An excellent read. The Army Engineers really screwed up the Everglades, and as soon as they straightened out the Kissimmee River so it was a channel and no longer a sheet of water, they had to deconstruct it because of the damage done to the environment.
You must log in or register to reply here.
Share:
Facebook Twitter Reddit Pinterest Tumblr Email Link
Top Bottom