The "Flaming Plains", A PBX Hike

On 9/17/2019 all members of PBX received this edited email from Bob concerning our next hike.

Do you like your clothes to get all sooty? Do you mind if you come to the end of a trip looking like an old time charcoal collier? Do you like seeing the destruction that a wildfire can cause, and yet also be able to see the regeneration already begun in earnest? Then this trip is for you. On Saturday, 19 October, at 9:00 AM, we will be traversing the heavily burned areas of the March 2019 fire that burned 11,000 acres in the west plains. This was a true wildfire, not a sissy controlled burn. Already many plants have returned in full force, and the new herbaceous growth in some of the wetter spots is already much more vigorous than before the fire.
Let me know if you plan to come, so we can look out for you.


The members of PBX have spent 18 months for various reasons taking a break from our exploring. However, today we resumed our travels by exploring the "Flaming Plains" that burned behind Coyle Field in late March of this year. The attendees on this hike were:


Our day started on Sooy Road about a half mile from Route 72. Our goal was to see the changes that occurred this summer after the big fire early this year. We first headed across country towards the back of Coyle Field where we visited the concrete tower that I first visited in the 70s.

We had this view of the back of Coyle Field as we arrived. Soon after we left the area three huge transport planes passed over and dropped men and or supplies out by parachute onto the property. They did it twice today as we watched from a distance. 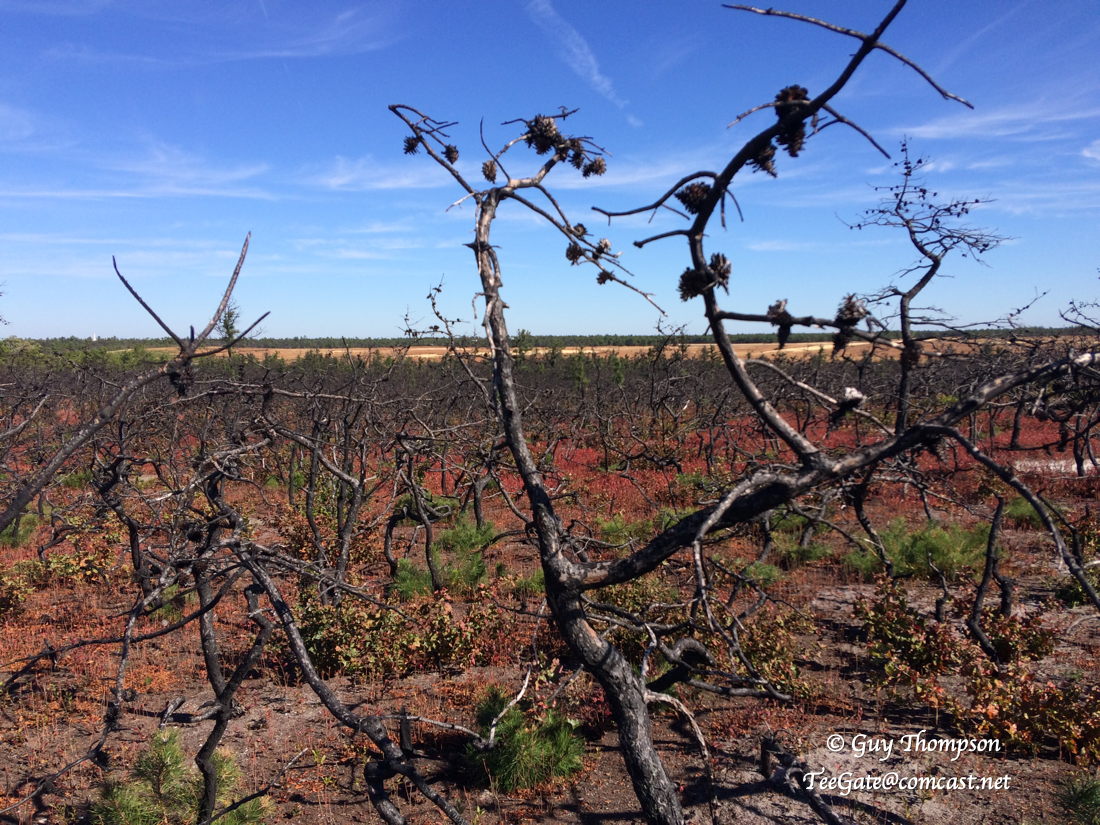 Then to the concrete tower where I took this photo around 1978. 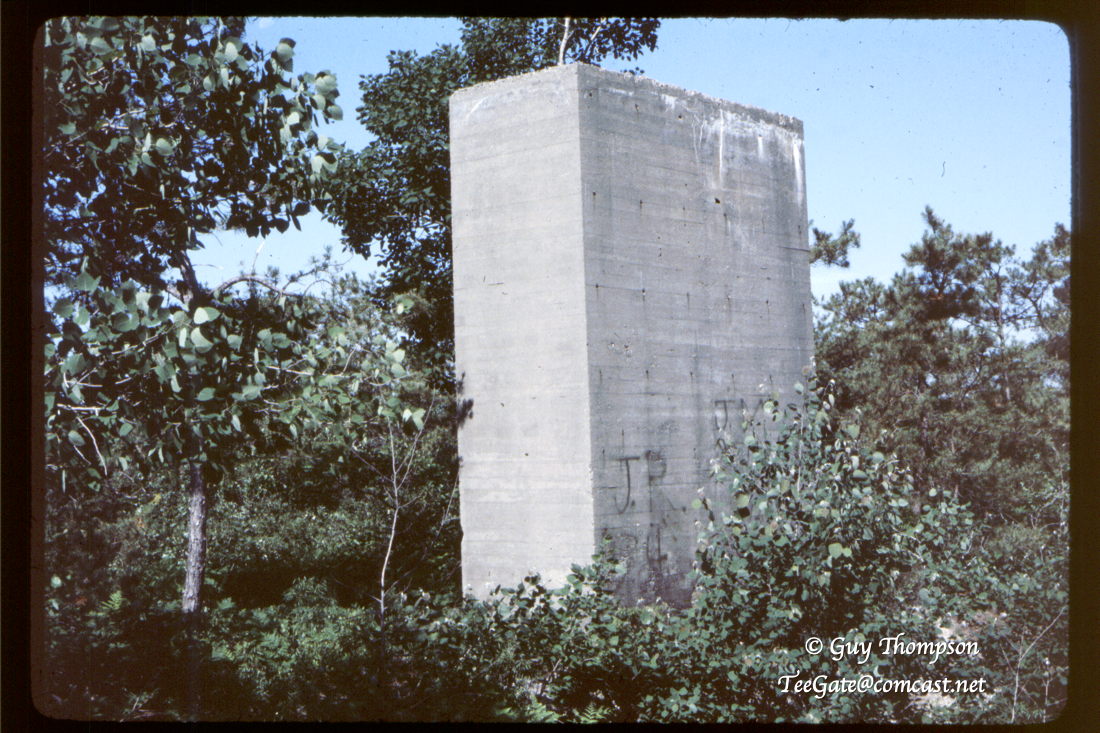 And the boys there today. A few of those on this hike were not even born when I first visited there. Notice the lime leaching out of the concrete. 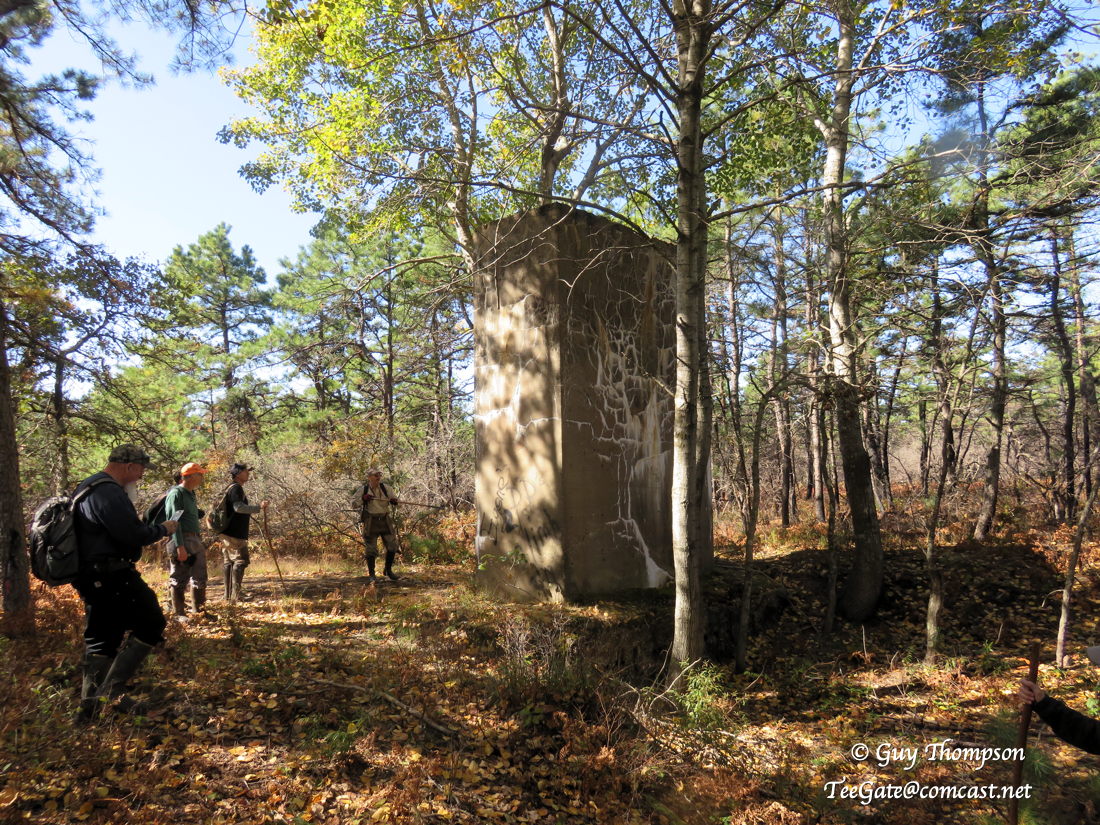 Moving on we made it to the below location where I noticed in the far distance we could see Apple Pile Hill. Scott brought up the coordinates of Apple Pie and we were close to 8 miles away. 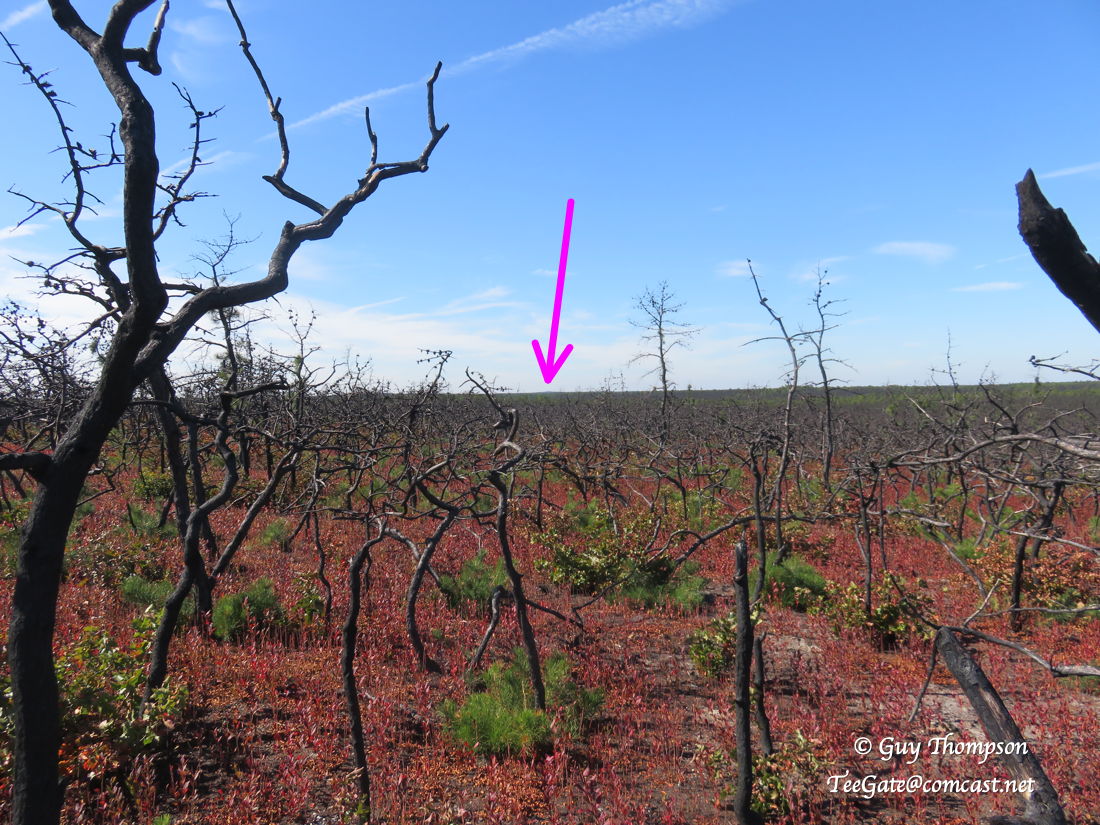 Zooming in as far as my camera could go. 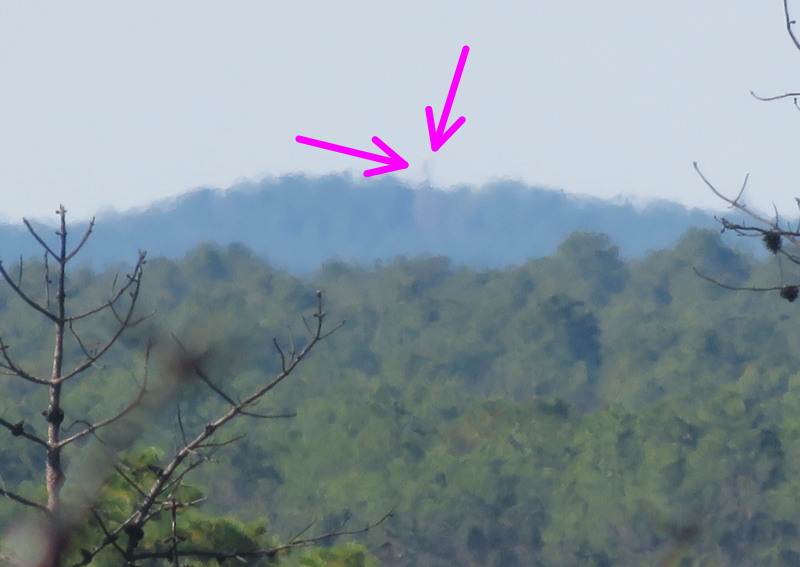 Eventually, we made it to the Rock Pile where we discussed what may be under the rocks if anything. Some good idea's I had not throught about before were brought up.

First, here it was on 4/7/2019 when Jessica and I revisited it after the fire. No vegetation at all. 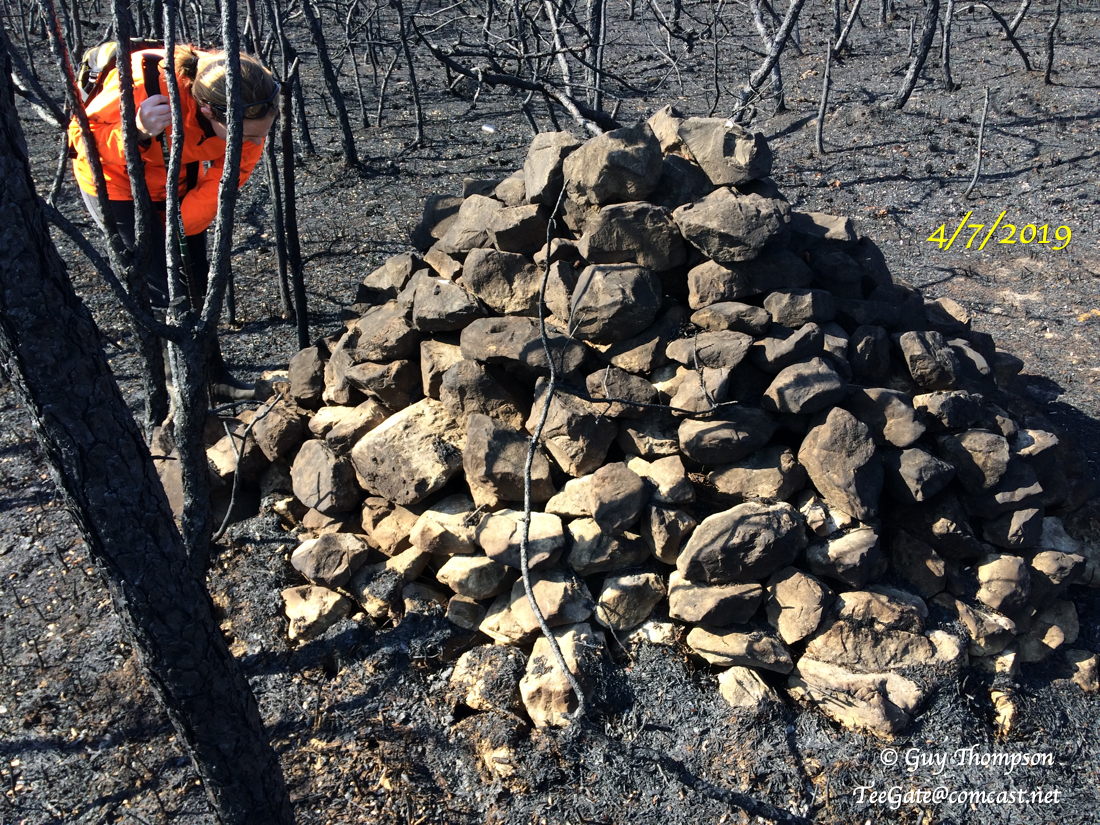 And after one summer it looked like this today. 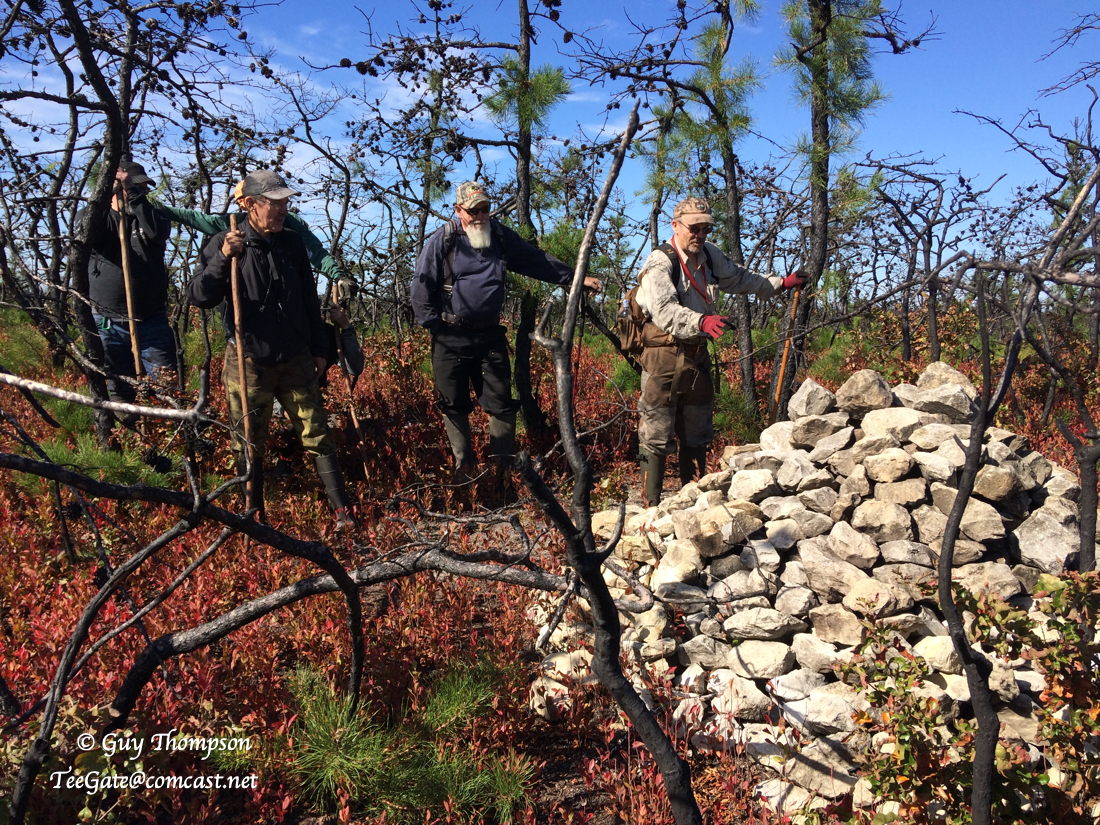 Jessica and others crossing a tributary of the Plains Branch. One of the few area's today where we saw water. Continued below. (Now the site only allows ten photo's in a post.)
Reactions: Hewey, maxwellandson, John and 2 others

And then the day was done. A group shot at the end of the hike where we looked exactly as Bob said we would in his announcement above.

Do you like your clothes to get all sooty? Do you mind if you come to the end of a trip looking like an old time charcoal collier? 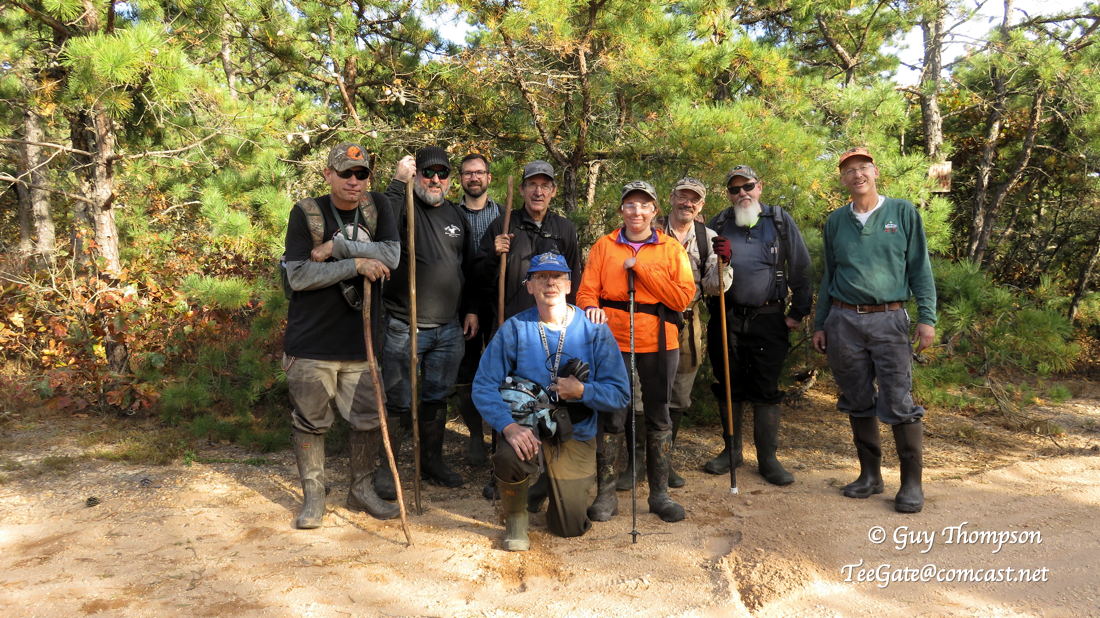 After 18, 900 steps on Jessica FitBit, and 7.4 miles of walking, the day was over. Here is Jessica doing what she always likes to do...being the first one to the end.

Our track for the day. I rated this hike 9 out of 10 and Jessica went all out with a 10. It was a good day with great hikers. Jessica giving us the full stats for the day.

A nice fall day. Crossing a wildfire area in the same year that it happened--how could we not do this? We probably did about the same miles as we did at the 2007 fire explore. The consensus was about 9 for the day.
Last edited: Oct 20, 2019
Reactions: maxwellandson

Scott, thanks again for the food and wine tailgate!
Everything was fresh and tasty. The wine was excellent!

Thanks for inviting me along. I had a very enjoyable day with all the PBXer's. It's nice to put a face to the members who post that I read over the years. It sure beats roaming the Pines alone taking pictures of plants that I can't identify. However, any day in the Pines is a good day.

Btw, those pants you gave me worked great. Thank you. I'll get much good use out of them.

This is Jessica's heart rate during the hike. She was in fat burn for 7 hours and 50 minutes. 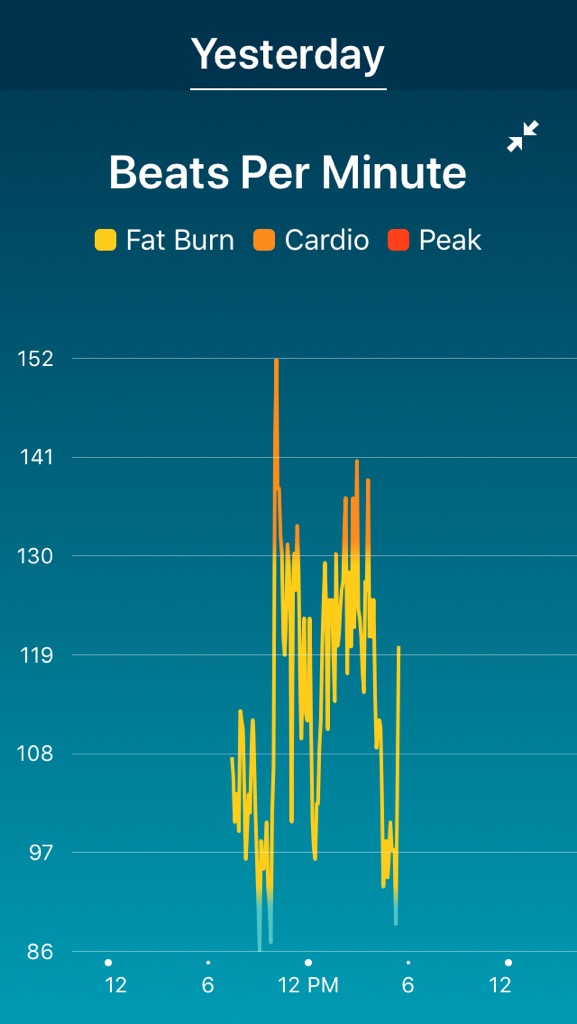 Interesting heart monitor. It would be nice to be able to determine recovery rate each time she stopped for a couple minutes. That is the real test.

We most likely could if the app would run in a computer and we could stretch out the graph.

It really was a heart warming experience to get back together with these boys and a girl again. We couldn't have had better weather or company.

The rate at which this area is recovering from a scorched earth fire is amazing to witness. Pine seedings have sprouted in bare white sand on the fire cuts and are massed in clusters where rain has washed clumps of seeds into dips. Pine trees that are charred, dead sticks are regenerating from their bases and deciduous plants including mountain are already over a foot high already.

As always, I insist on a tailgate social after every hike and last night was another winner. Roasted peppers, Italian bread, soppressata and sharp provolone washed down with quality beers and my pseudo homemade wine finished the day. Great group photos Guy and Scott. One of these days I'll have to collect them all into a kind of digital album.
Reactions: Teegate and RednekF350

bobpbx said:
Great group photos Guy and Scott. One of these days I'll have to collect them all into a kind of digital album.
Click to expand...

You're retired, remember ? I expect to see this album by Wednesday.

Guy, this photo behind Coyle field shows how massive your mustache has become. Like I told you, just let it go, and it will flourish. 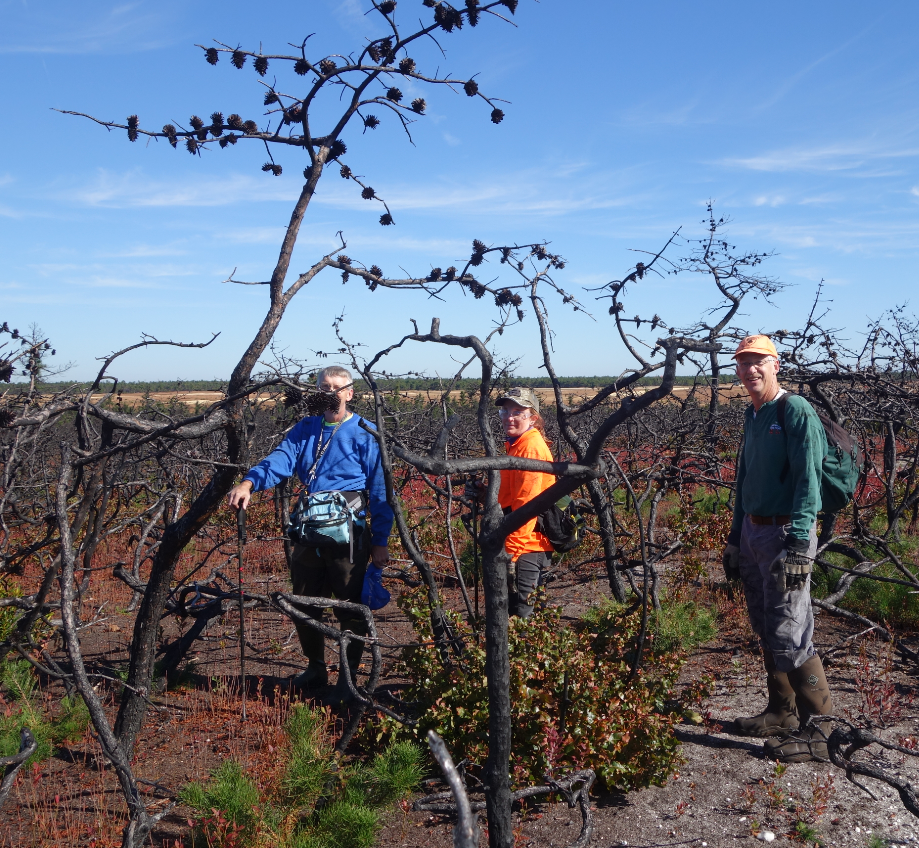 Here is a very unusual photo from Google Earth, no? Is this some sort of time warp, or foreshadowing?

Edit: it is actually one month after the fire. I was looking at the copyright. It's May 2019. Cool. bobpbx said:
Guy, this photo behind Coyle field shows how massive your mustache has become. Like I told you, just let it go, and it will flourish.
Click to expand...

I don't remember it being that bushy but I guess a photo does not lie.
Reactions: smoke_jumper and bobpbx

bobpbx said:
Guy, this photo behind Coyle field shows how massive your mustache has become. Like I told you, just let it go, and it will flourish.
Click to expand...