The Passing of Y Buc Bill

Yesterday my good friend and mentor for all things outdoors, Bill Schemel, a.k.a. Y Buc Bill on this site, passed away at the age of 92 after a brief fight with cancer. I will miss him dearly. He was like a grandfather to me and I have been his friend since for over 32 years. Bill sat next to me nearly every Thursday night at our sportsman's club over those 32 years.

Bill lived a very full life and was an avid trapper, hunter and fisherman and he went out of his way to promote those sports in any way he could. He was an active member of the South Jersey Enduro Riders, Square Circle Sportsmen, Retreat Gun Club, the president of the Camden County Chapter of the NJ Federation of Sportsmen's Clubs and was the NRA recruiter for our club.

We had all of the same interests including guns, Harley-Davidson motorcycles, hunting, fishing and even good bourbon !

I will post pictures over the next few days of his life, many of which I have posted here before. I can only hope that I live close to 92 years and stay as active as Bill did right to the bitter end.

Bill and I would meet up every August in Cape May for the Mid-Atlantic $500,000 fishing tournament weigh-ins in Cape May. Bill always had his favorite spot on the railing when the big fish started rolling in and I would be right there with him. This year it was obvious he was slowly whittling away but he had not yet been diagnosed

May God rest his soul.

A few pics from past Mid-Atlantics. 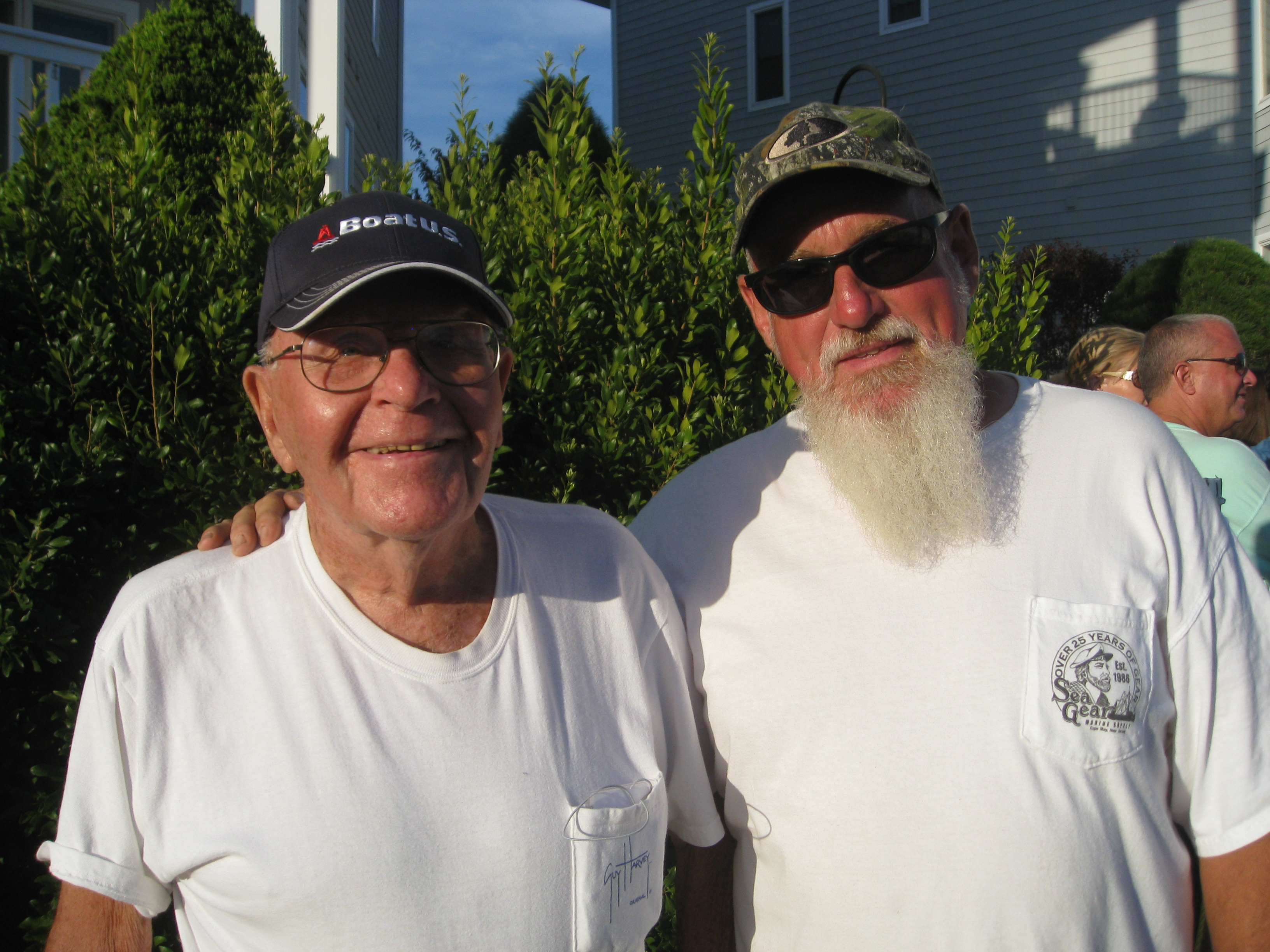 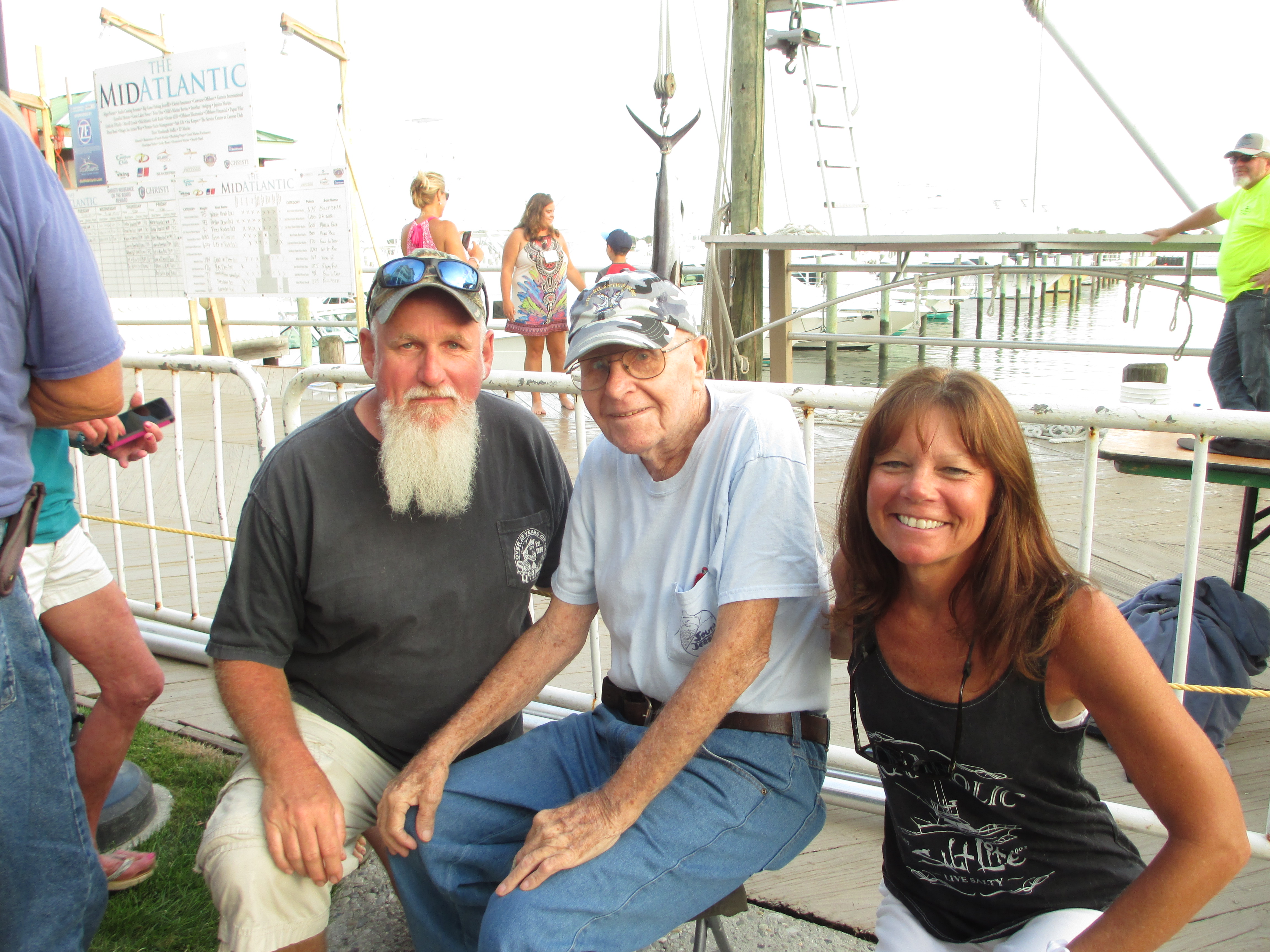 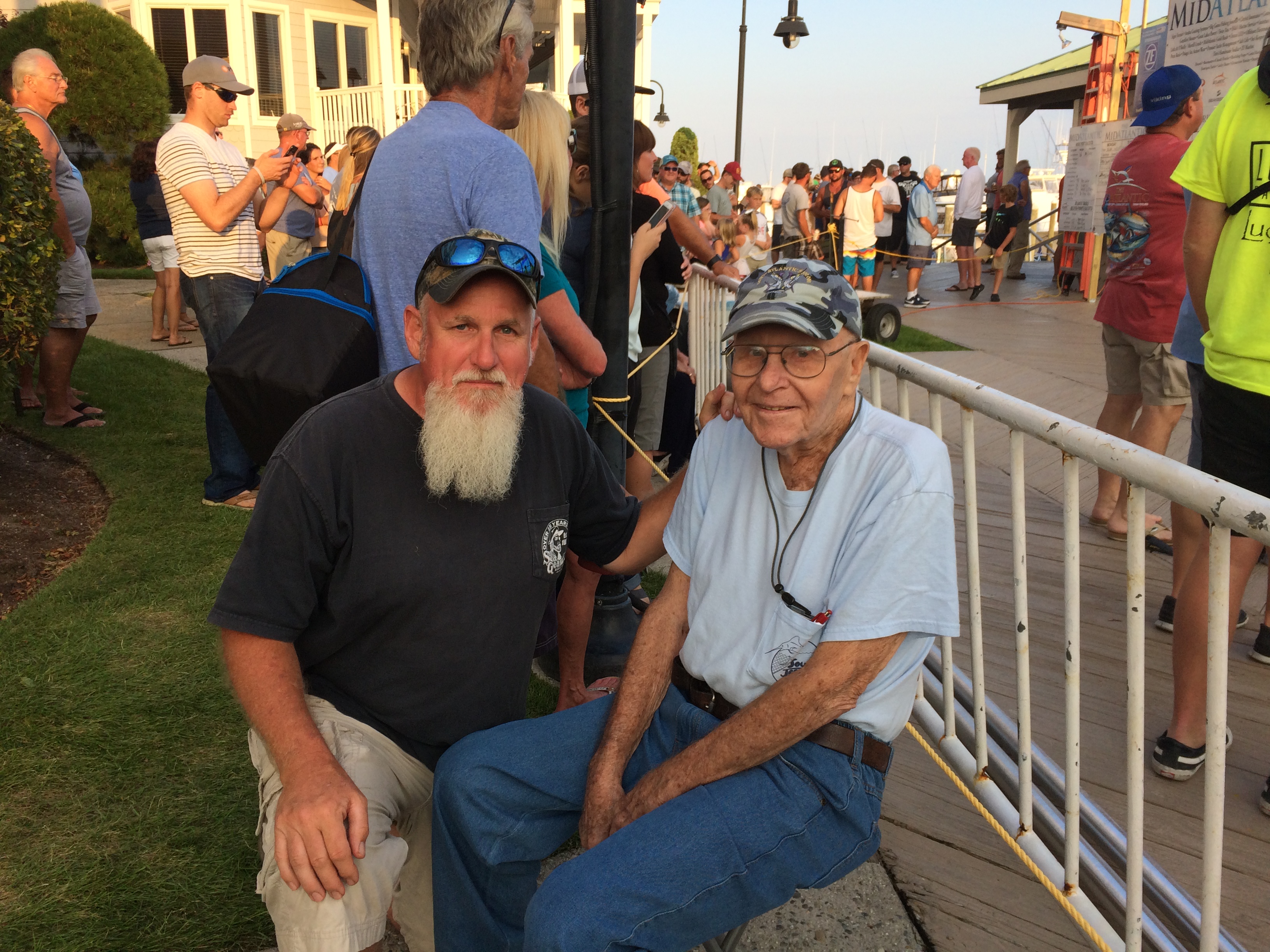 I'm sorry for the loss of your good friend Scott. He was a fine man, and was always courteous to all of us on the site, and really brought a spark to some of our conversations.

I too am sorry for the loss of your dear friend Scott. I pray for his soul & your comfort. When I ride my dual sport thru the pines & have a tough time managing the sand, I think back to the pics Bill posted years ago of him & his buddies manhandling those Harley's on those same trails. I'd tell myself "man up like Bill".
Rest in Peace Bill.
Reactions: bobpbx and Broke Jeep Joe

Thanks Bob.
Here are a few of my favorite pines related pictures of Bill.

Bill was always a deer hunter in the pines but he started riding Harleys in the pines 1946, competed in enduros in 1947 and entered his first Sandy Lane Enduro in 1949. That's a long time ago.
Most people who know even a little about motorcycles would probably envision that early enduro bikes were a crude version of today's woods bikes, maybe a single cylinder, stripped down to the frame motorcycle. Well, they started on Harleys and Indians. Over 750 lb. iron monsters with tank shifters and foot clutches !

Having ridden motorcycles for over 40 years myself, I still cannot fathom blasting through sand and water on a hardtail (no rear suspension) Harley and trying to shift one-handed and operating a foot clutch at the same time.

The first picture is Bill and a friend visiting Dave Amato, a Piney who lived just below Dutchtown off 206 near the modern day Boot Hill Gun Club. Bill is on the far right and he is wearing his Sandy Lane Enduro sweater. This picture was taken around 1950.
The second picture is Bill flying across a stream behind Batsto. He has a route card on the handlebars.
Helmets ? Helmets are for girls.

The third picture was taken by me about 10 years ago. It is the same vantage point as Bill's pic. 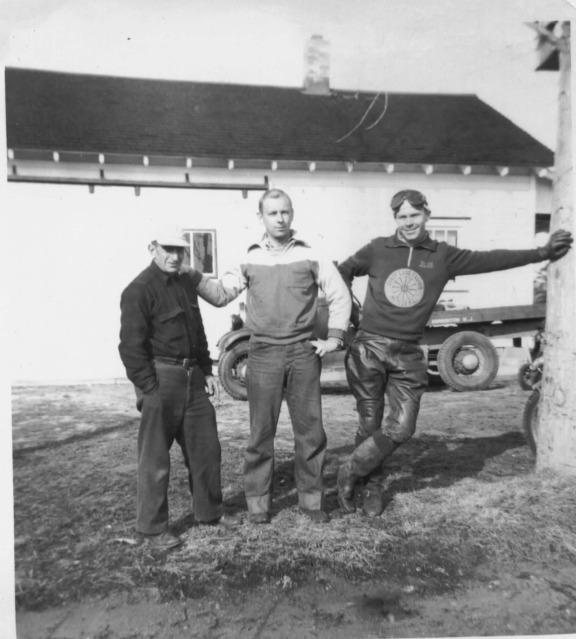 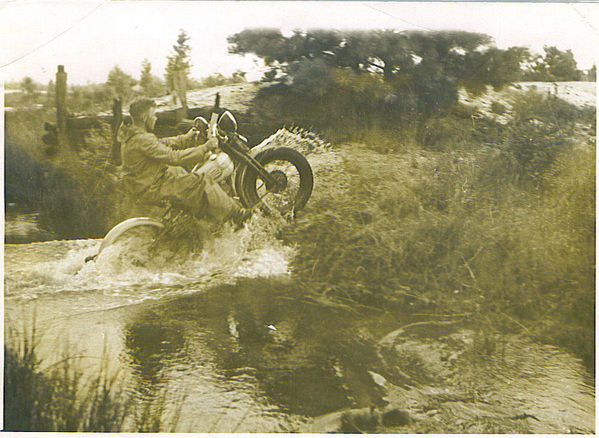 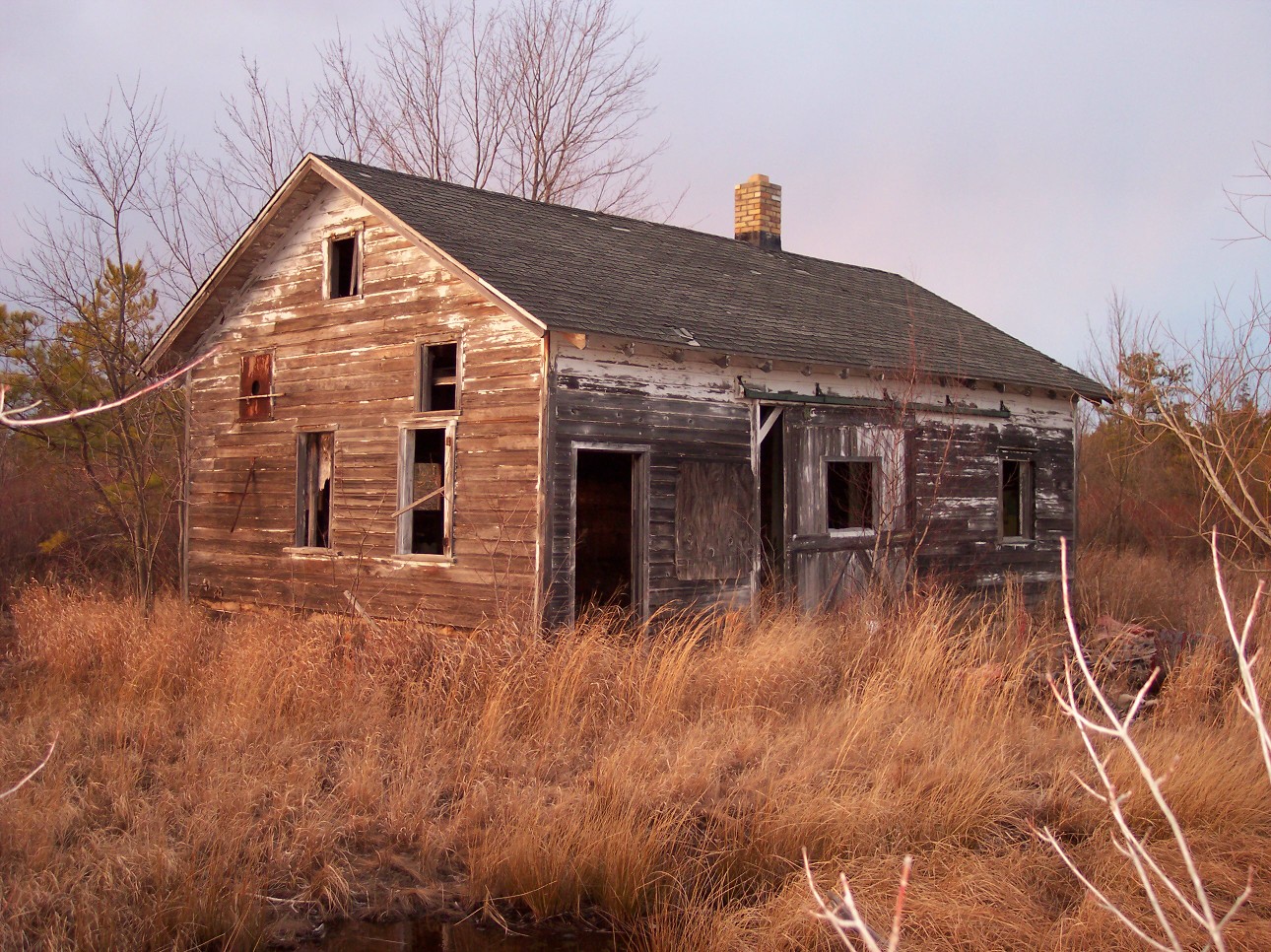 Sorry to hear that. That is a nice long life though, and it sounds like he was able to enjoy it to the end.
Reactions: RednekF350

Sorry to hear this Scott! Cancer is a horrible disease that took the life both of my Mother and Brother within 3 months of each other. Keep your head high and know he is up in the sky with all the other great woodsmen and hunters! Our Condolences my friend.
Reactions: RednekF350

Here is Bill from a thread on here talking about the tank shifting and falling off the bike 50 times !

More on the Route Sheet

"Thanks for the kind words Scott..Just like to add a little info to the Route Sheet.Key time for the Enduro was 6 AM.That is the Phantom rider.Riders on #1 start at 6 .01 and so on.As you can see noon control was back at Pic's On hour lay over.First riders due to finish at 4.51 PM.If you have a late number you better have a head lite.All this figures out to 10 hours riding[if you are on time ],.This Enduro was about 222 miles long.Enduro.s are a lot tougher today.Most less then 100 miles.The cycles are made for riding Enduros.Back in the old days,you had a choice of a Harley or an Indian.Triumphs,BSA's,AJS's,Matchless's were all street bikes and riders converted them for the wood's.If you did not know how to ride deep sugar sand on these big bike's,you were in trouble.My first sand run,I must of parted with my bike at least 50 times.You have to realize the gear shift was on the tank and the foot shift was on the left foot board.The secret to riding deep sugar sand was to get your bike in high gear as fast as you can and pour it on.Getting on top of the sand and relaxing was the way to go.Way back when,the two tracker was deep sugar sand from Route 206 to Quaker Bridge and beyond..Another rider John Fenimore and I rode that side by side at 60+ miles per hour many times.All this took place before the State bought the Wharton Estate.As long as there is an interest,I will be glad to give Scott a lot of info."

I remember that post & it inspires me. Thanks for re-posting

Very sorry to hear that Scott. He was a gentleman to me and spent a few hours in my front yard talking to me a few years ago. He even did his part to fight the good fight to keep the roads open when we all were involved with that adventure. From what you have said and I have experienced he was a good man. Rest in peace Bill.

Sorry for your loss Scott. I always liked Bills posts and insight anytime he provided it on this site. The old photos of him riding through the barrens are special and everytime I see them it makes me wish I could go back to that era in the pines.
Reactions: RednekF350

Sorry for your loss.

We had our weekly club meeting tonight at Square Circle. Our club has been meeting every week since 1938 and we have never let weather or anything else cancel a meeting. Ever. Our Club Secretary reads out the number of consecutive meetings we have had each week and we are over 4,200 right now. I know Bill would have made it there if he could. He was a 50+ year member.

My wife thought I was an idiot (nothing new) when I left the house in a snow squall tonight to go to the club but she quickly acquiesced knowing that I actually enjoy driving in these conditions and that we would be having a moment of silence for Bill tonight at our meeting.

Bill did not fear the weather, he dealt with it. He told me duck hunting stories from his youth that I wish my son Mike never heard.
Last week my son Mike and four friends hunted coastal Massachusetts in single digit wind chills for sea ducks for four days.
Bill would have loved to hear those stories.

RednekF350 said:
The secret to riding deep sugar sand was to get your bike in high gear as fast as you can and pour it on.
Click to expand...

That is the secret in a car also.

Didn't realize he was from Mt. Ephraim. That's damn near walking distance from me.

Very close to me also.

Sorry to hear of Bills passing, I enjoyed his posts. You were lucky to have a friend who shared so much in common. BTW, do you know the origin for his Y BUC name? RIP

He had quite a life, his way. Scott, do you know Andy Drysdale? I carpooled with him to Princeton for years in the 80's. I think I remember him mentioning the Square Circle Sportsmen club. He was a bow hunter.
You must log in or register to reply here.
Share:
Facebook Twitter Reddit Pinterest Tumblr Email Link
Top Bottom