Life is good for this 101 year old. You gotta love her hat

A recent study shows physical activity of any kind can help protect against memory problems as we age, even if we have the biomarkers linked to dementia. She seems to have discovered the formula.

That's awesome. I hope to be hunting deer and fishing until I fall over too. Perhaps I won't be hunting alone when I do fall over now that I have a new hunting partner too.

My wife just started hunting this year at 58. I bought her a 12 gauge 870 4 years ago and up until now she has only shot paper with it. She had been tagging along with me on deer hunts in NJ and PA for about 5 years but without her gun. She said she wasn't ready. But this year she agreed to hunt and I bought her the apprentice license and a deer permit. She can go with me and shotgun hunt for two years as an apprentice and then she will have to take the test and get a regular license.

She went with the gun for the first time two weeks ago and had her fist shot at a buck. I watched everything she did as she took the 40 yard shot with 00 buckshot. I stressed head down on the stock and an easy squeeze on the trigger and gave her my Primos Trigger Stick for stability. The deer appeared to be hit hard but then it took off. We searched that night for an hour and for 4 hours the next day with my son's lab and his buddy's Australian Heeler, who has actually found several deer, but to no avail. We had no blood or hair at the shot location and we had rainy conditions the night she took the shot. I resigned myself to believe that she missed. She is still upset but has vowed to go out with me again next week to close out the permit shotgun season. 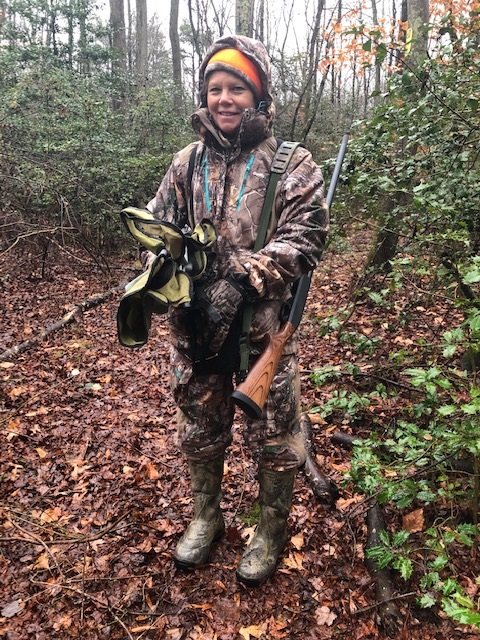 Teegate said:
Life is good for this 101 year old. You gotta love her hat

Thanks for posting this. Another role model. Old broads forever!
Reactions: RednekF350