Here is an updated list of books that were not sold at the Lines On The Pines by Lost Town Hunter. If you are interested in any of them please contact him.

Used publications (many of them hard to find) are available by arrangement (contact info above). This is a unique opportunity especially for those just starting out to develop their New Jersey, Pine Barrens, or natural history collections to purchase books and pamphlets at bargain prices.

THIS LISTING HAS BEEN UPDATED AS OF MARCH 12, 2013. IN SEVERAL INSTANCES PRICES HAVE BEEN LOWERED SINCE PREVIOUS POSTINGS.

These volumes are a “gold mine” of information on New Jersey history in general. Yet most history buffs are unaware of their contents, which goes beyond geology, to include iron mining and furnaces; bench markers; streams, wells, & water supply; forestry; clay & marl mining; and the brick, pipes, and pottery industries and the lost towns associated with them.

Annual Reports of the NJ State Museum (hardcover)
Sold out

New Jersey Agricultural Society Publications
These booklets are invaluable, difficult to find, and expensive to purchase. When available, they rarely can be obtained for less than $50 per volume.

BOOKS OF HISTORICAL AND CULTURAL SIGNIFICANCE

The last paper cited by Guy above can now be found online at the below link. It is very interesting to read. Mr. Harold Lutz really did a thorough investigation on the reason the plains vegetation appears so poor compared to the rest of the pines. This was published in 1939. I am unaware of anything around that refutes this investigation or provides a better theory. There are good nuggets in here.

Thanks, Bob. Just yesterday, I was searching for articles on the Pine (Pygmy) Plains. After exploring the area in my Harshberger Post, I gain renew interest in the pygmy pines. It's been a while since I extensively explored this area, during my early years of exploring the Pine Barrens when I didn't know as much. I plan to start exploring this area this year when the Corema conradii comes in bloom. For anyone else that may be interested, there are about five other good articles on the net. Instead of listing them, just google "NJ Pine Barren West Plains, East Plains, Pygmy Plains, etc.". I never really knew what was considered the boundaries of the West Plains, East Plains, and Little Plains. One article stated the West Plains (Upper) being in the Coyle Field area, East Plains (Lower) being Bombing Range area, and Little Plains being the FFA Radio Tower area just west of Warren Grove. For me, this is a big help when reading the articles.

Rooftree said:
I never really knew what was considered the boundaries of the West Plains, East Plains, and Little Plains.
Click to expand...

The NJDEP has a dataset of "Natural Heritage Priority Sites" that defines some boundaries: https://www.nj.gov/dep/gis/digidownload/metadata/statewide/prisites.htm

Here's a quick mash-up of the plains. 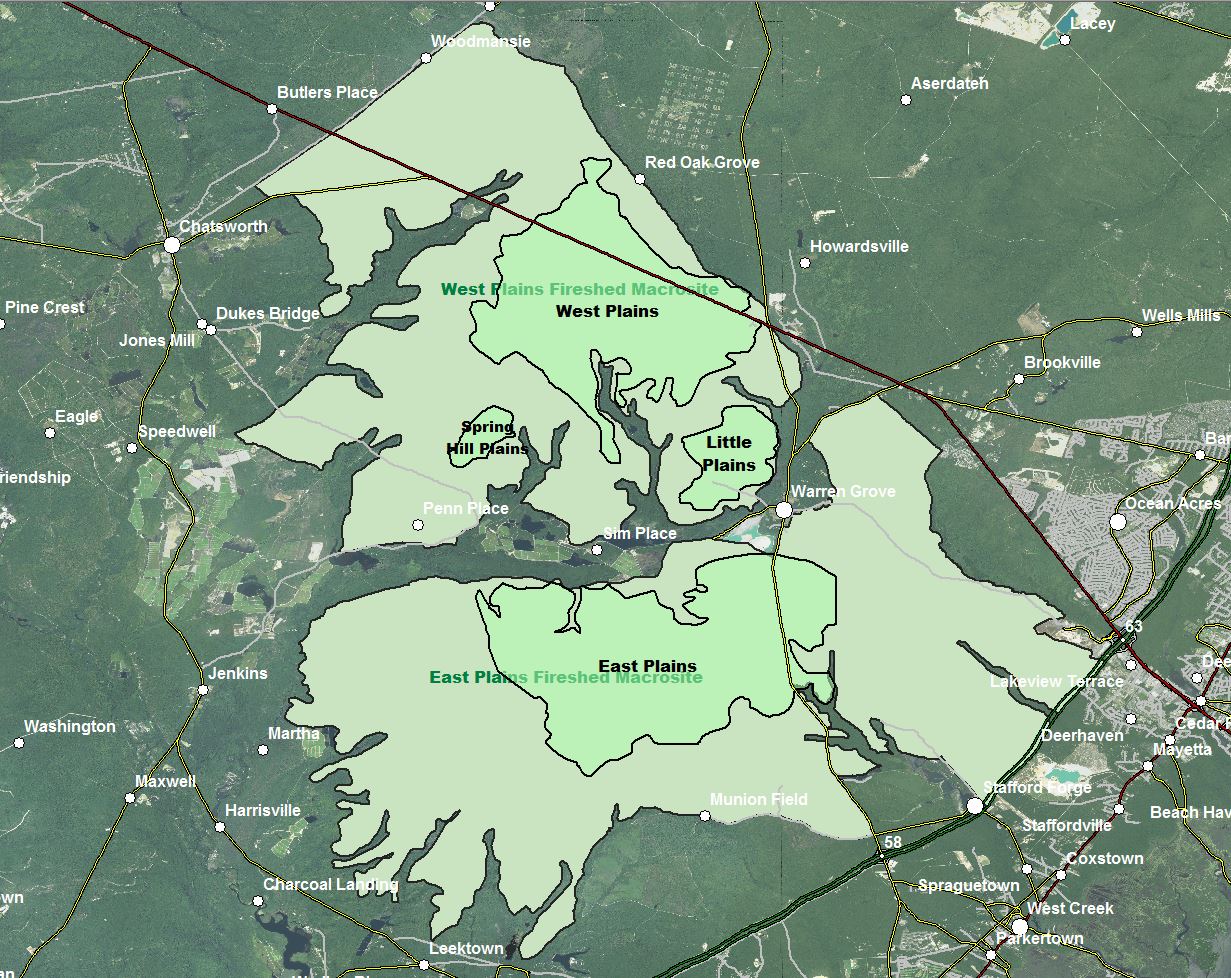 Boyd Thanks. In addition to your map, the article that I read also stated three other smaller tracts: Bass River Plains (49 ha), Westecunk Plains (31 ha), and small occurrences in Forked River Mountain, but weren't significant enough for the article. To all, the best way to get to the article is google "New Jersey Pine Plains - The True Barrens of the New Jersey Pine Barrens" Then look for the hit: Savannas, Barrens, and Rock Outcrop Plant Communities of North American. That's because it's one of many articles under that.
Reactions: Boyd and bobpbx

I created a sort of paraphrased / bullet summary of the article by Harold Lutz. It was more difficult to do than I thought because he scatters the good nuggets all around the paper. I did this for me since I have a poor memory lately, and I really like his paper.

The East and West Plains are the two largest areas supporting low tree growth, but they are not unique in the sense that there are no other areas occupied by similar vegetation. There are many other areas in South Jersey where there is low growth. The plains have been increasing in size during the recent past (written 1939).

The Plains community owes its continued existence to fires. Because of its small size, tree growth on the Plains is readily killed back, since in this community all fires burn in the tree crowns as well as on the ground surface. In the (classic) Pine Barren community the trees are larger and their stems are protected by extremely thick bark.

The Plains have been burned more frequently than either of the other communities (Pine Barrens proper and transition areas). The reasons for the greater frequency of fires on the Plains appear to be as follows: First, as already mentioned, the East and West Plains occupy broad rolling divides which are not dissected by stream branches which might serve as barriers to the spread of fire. The practical absence of natural barriers to the spread of fire is regarded as important in accounting for the high fire hazard of these areas. Elevation above sea level is not a controlling factor. Second, incendiary fires were frequently set in the Plains to improve berry crops. Third, in the past, when fires originated in the Pine Barrens near the East or West Plains it was common practice for fire fighters to direct them out into the Plains where they were left to burn themselves out.

Soil type is not a controlling factor in determining the existence of the Plains community. The Plains seem capable of supporting forest vegetation similar to that encountered in the (classic) Pine Barren community. And there is evidence in the literature that certain parts of the East and West Plains formerly supported trees of larger size than they now support. Phytometer studies involving the growth of rye and oats in soils from the Pine Barrens and Plains failed to indicate any important differences in fertility. These experiments were carried out in a greenhouse where soil moisture was maintained at a favorable level.

Measurements made in the course of the investigation do indicate that the rate of evaporation in the Plains community is at least 100 per cent greater than in the adjacent Pine Barrens. This is a significant fact and must have an unfavorable influence upon the water relations of the Plains vegetation and also upon 'fire hazard. (Also), during drought periods surface soil moisture in the Plains may reach the point of non-availability while surface soil moisture is still available in the Pine Barrens.

In summation the conclusion is reached that the Plains areas are capable of supporting forest growth similar to that in the Pine Barrens. Inasmuch as the Plains owe their continued existence to repeated fires, it is obvious that effective fire protection is the first and most important step toward their rehabilitation.
Last edited: Feb 16, 2019
Reactions: Boyd and Rooftree

Here's an "oldie" from almost 10 years ago, but still possibly of interest to Garmin die-hards.