wis bang said:
I'm suprised someone isn't trying to re-claim the clay, it was special stuff from, I believe New Mexico, that stayed mostly on the track. Kept the dust down. He paid alot for it!
Click to expand...

I've heard rumors of New Egypt Speedway trying to get the clay but were stopped from doing so because of contamination at EWS.

It was located in Pitman, at Alcyon lake.

To get to arneys mt. from Vincentown Diner head north on 206.At the next light turn right on North Pemberton Rd.Go to next light and turn left on Arneys Mt. Rd.Drive down road until you start going uphill.Turn at streets on your left and they might lead you up the mount. Or go to stop sign and turn left on Juliustown Rd. and look for any open roads on your left. I dont know if there is access to the track or if anything remains of it but my friends mom was born in that area in the 1940s and she used to tell us about it.Also in the 70s and 80s there was a dragstrip on an unused runway on Maguire AFB called Stratorods Dragstrip.I would help setup and teardown for free admission.I also used to race on Mt. Misery Rd.in New Lisbon between the blueberry farms by the Browns Mills VFW.

I am hoping over the weekend to post scans of some ephemeral items I just received this evening from the old Pleasantville Speedway. I’ll probably throw in a little history for good measure!! (Sorry—I can’t resist writing some history on any subject—including the racetrack!!).

Stay tuned and thanks for your patience!

Used to go to P-ville and Vineland with my dad when i was a kid. There used to be alot of stock car tracks in NJ.

(Sorry—I can’t resist writing some history on any subject—including the racetrack!!).

No need to be sorry for that.

Wall Township Speedway just closed down for good. Not much of a circle track guy but sad to see a racetrack go.

Took a ride to the old Atco Speedway this afternoon. I hadn't been back there in many years. The folks there were very friendly, and very appreciative that I stopped to ask permission before I went back there. The path in is getting really overgrown as is the track itself. The area was partially cleared for the reunion a few years back. It sure doesn't look that way now.
Snapped a few pics while I was there.

Very nice pics Pine Baron! You should add your pics to Google Earth.

I never knew there was a circle track in Atco.
I searched Google earth looking for it. I think I found it.
It looks like it is between Atlantic ave. and Old White Horse pike.
Is that the place?

After searching I found an old thread about this track and other race tracks.
http://forums.njpinebarrens.com/showthread.php?t=3285

Good ones,
I have been meaning to get out and shoot a couple pics. I had already gotten permission from the Coia's. Just too many things going on.
It's really got some interesting tales attached to it. Thanks for sharing your images!

ICANOE2 said:
I never knew there was a circle track in Atco.
I searched Google earth looking for it. I think I found it.
It looks like it is between Atlantic ave. and Old White Horse pike.
Is that the place?
Click to expand...

Yep.
Check it out on MSN Live search, Bird's eye view.
You'll gain a real appreciation for it. The detail is quite good.

Wow,
That's a shame about Wall Stadium. I raced there back in the eighties and thought it was a great track. (My car handled better there than New Egypt)
When I was a kid I used to help a neighbor out with his stock car which he ran mostly at P'ville. We would sneak into the pits or sit on the stone piles at A. E. Stone's place. I was devistated when P'Villle closed. I remember also when they made the muffler rule at East Windsor and couldn't believe it. It seems like people move in right next to a track and then complain about the noise. Looking at the panoramic pic of it brings back good memories. The tracks were here first! I guess it's just a matter of time before all the "transplants" and "city folk" ruin all our good ol' Jersey fun.
Frank F7

I'm not so sure about google earth,yet. I just downloaded it and still learning. I found the intersection on "maps". The track is between Atlantic, Hendricks and the Old White Horse Pike.

I was searching the net and found a very cool site that tells about the history of NJ racetracks.
http://www.njrn.com/njhistory.html
A

I checked the thread real quick and didn’t see this posted. A great site for old race tracks including a separate section for satellite photos is xxx.thevintageracer.xxx. Most of the closed NJ tracks are included.

I know this is an old thread, but since it is about a track that was in operation in the 50's, I guess 2008 isnt that long ago relatively speaking. Also, I see that Largo is still posting on these forums recently, and that is who may appreciate some of this info. No I dont have info from the 50's.......but I remember playing on this abandoned track as kid around 1995. I was just telling a friend about how creepy it was as a kid. So I started searching online and found this thread to be very interesting. I had no idea the true history of the racetrack. I have relatives that live very close to the property and me and my cousins would walk through the woods and go back to the track to explore and pretend we were discovering uncharted lands and look for the Jersey Devil, haha. One other time (in maybe 2001 timeframe) I found a way to pay my respects to the racers who had driven the track back in the good old days. I was explaining the existence of this racetrack to a friend of mine who refused to believe what i was telling him, that this 3/8 or 4/10 or 1/2 mile track existed abandoned in the woods. I said I promise you I'm not exaggerating or lying. he said if its for real, then take me there. I said sure, anytime you are ready to go. Well he had just purchased a brand new 4 wheeler and was complaining that he was afraid to top it out on grass or a public road, so i suggested he bring it along. Man I wish I could have taken a picture of the look on his face when we got to the track. Let's just say he had no problem topping out 5th gear that day. Good times!

I believe ironmaster Stephen Colwell of Weymouth Frurnace fame had a penchant for gambling, and built a horse track next to his mansion (here?):

Also Cavoli's laid out a track next to their airport on Oak Road & US Route 40 in Buena, which as I understand was the inspiration for Eugene Mori's Garden State Park Racetrack in Cherry Hill. You can still see a thin ring of pitch pine that grew up in its trace on the 1995 aerial:

Mori's wife's grandfather (Robert C. Ewan) was the second owner of the Richland Hotel, a structure for which I obtained a Certificate of Eligibility for the National Register. 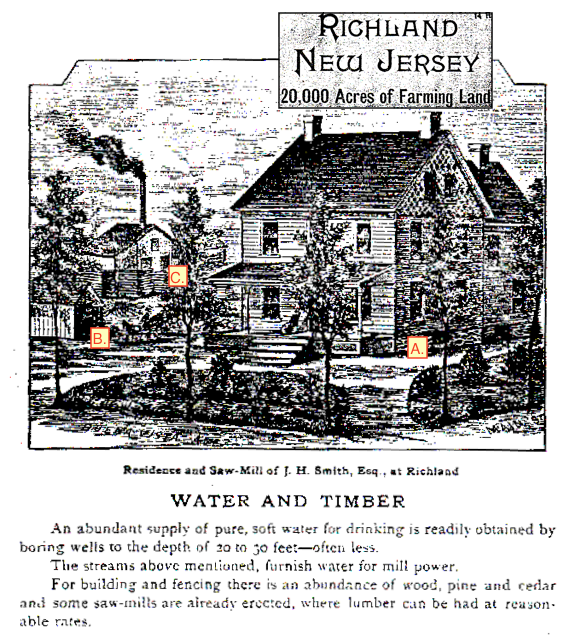 ​
Old sketch of Richland Village at southeast corner of Main Avenue and US Route 40. (A) the Jonathan Harris Smith house, Richland’s first residence and is considered eligible for listing in the New Jersey and National Registers of Historic Places under National Register criterion. (B) Johnny Smith’s seed store, the first business in town. Unfortunately the structure was recently torn down (note Smith's handicapped son in a wheelchair on porch). (C) Smith’s steam-powered sawmill, which was dismantled from the Cannon Range field (Milmay) and rebuilt in anticipation of the West Jersey and Atlantic Railroad. Its footprint is now covered by a caboose display within the newly constructed (without Pinelands permits) “Sawmill Park.” Sketch from Jones (c.1888: 9, Richland New Jersey: 20,000 Acres of Farming Land).​
You must log in or register to reply here.
Share:
Facebook Twitter Reddit Pinterest Tumblr Email Link
Top Bottom