The storm that just won't go away.

On CNN this morning they said it would be only a "wind and wave" event and "nothing more". But they said some of the waves could be 10 to 15 feet high, so I might be standing in the sandbag line today if I lived at the shore.

They also said that both of the major models indicated that Maria would not impact the US, but that it was too soon to know that with any certainty.

Boyd said:
A chance of showers, mainly after 10pm. Mostly cloudy, with a low around 66. Northeast wind 10 to 14 mph. Chance of precipitation is 50%. New precipitation amounts between a tenth and quarter of an inch possible.

Tuesday
Showers likely. Cloudy, with a high near 73. Breezy, with a north wind 18 to 25 mph. Chance of precipitation is 70%. New precipitation amounts between a quarter and half of an inch possible.

Tuesday Night
Showers likely. Mostly cloudy, with a low around 64. Breezy, with a northwest wind 15 to 23 mph. Chance of precipitation is 60%. New precipitation amounts between a quarter and half of an inch possible.
Click to expand...

Wave heights. Click the m in the box till it turns to ft, then click your cursor wherever to measure.

This is starting to sound like "the hurricane that wasn't".

* CHANGES TO WATCHES AND WARNINGS:
- All watches and warnings have been canceled

* CURRENT WATCHES AND WARNINGS:
- None

Hurricane Jose was located approximately 250 miles east of Cape
Hatteras, North Carolina, moving northward at 10 mph this afternoon. A
continued northward movement is expected with the hurricane through
Tuesday. Jose is then forecast to turn more to the northeast and weaken
to a tropical storm Tuesday night into Wednesday. This latest forecast
track keeps the center of Jose more than 200 miles off the northern
mid-Atlantic coast at its closest point to the forecast area Tuesday
afternoon through Wednesday morning, which is far enough offshore to
spare the region from seeing the worst of the winds, heavy rain and
storm surge.

The Tropical Storm Watch has been cancelled for all of coastal New
Jersey and Delaware but remain in effect for their adjacent coastal
waters. Sustained tropical storm-force winds are no longer expected to
occur over land. It will still be breezy at the coast on Tuesday with
north to northeast winds 20 to 30 mph and gusts up to 40 mph.

Minor to moderate coastal flooding is still expected to occur through
at least Wednesday morning. A storm surge of 1 to 2 feet above ground
level can be expected at times of high tide. There is a potential for
locally higher storm surge between 2 and 3 feet above ground level to
produce moderate coastal flooding for the ocean front and back bays
communities at high tide Tuesday evening. A Coastal Flood Watch has
been issued for these areas.

The threat of flooding from Jose has decreased across the area with
the axis for heavy rain shifting to our east.

Regardless of the track, hazardous seas and dangerous surf, including
a high risk for the formation of life threatening rip currents, will
still occur through most the week. Moderate beach erosion is also
expected, especially Tuesday and Tuesday evening when both winds and
waves ramp up.

* SURGE:
Prepare for locally hazardous surge having possible limited impacts
across coastal locales in Delaware and New Jersey. Potential impacts
in this area include:
- Localized inundation is possible with storm surge flooding
mainly along immediate shorelines and in low-lying spots, or in
areas farther inland near where higher surge waters move ashore.
- Sections of near-shore roads and parking lots could become
overspread with surge water. Dangerous driving conditions are
possible in places where surge water covers the road.
- Minor to locally moderate damage to marinas, docks, boardwalks,
and piers is possible. A few small craft may be broken away
from moorings.

* OTHER COASTAL HAZARDS:
Hazardous seas and dangerous surf is expected ahead of and with the
passage of Jose. Moderate beach erosion is expected with the heavy surf
also breaching dunes, mainly in usually vulnerable locations. There is
a high risk for life-threatening rip currents.

* WIND:
Little to no impacts are anticipated at this time across New Jersey
and Delaware.

When making safety and preparedness decisions, do not focus on the
exact forecast track as there are inherent forecast uncertainties
which must be taken into account.

If you live in a place particularly vulnerable to flooding, such as
near the ocean, in a low lying or poor drainage area, in a valley, or
near an already swollen river, plan to move to safe shelter on higher
ground.

Always heed the advice of local officials and comply with any orders
that are issued. Do not needlessly jeopardize your life or the lives
of others.

As it pertains to this event...this will be the last local statement
issued by the National Weather Service in Mount Holly NJ regarding
the effects of tropical cyclone hazards upon the area.

Actually the best thing for us right now is if Jose stays strong. The trough created would also suck Maria out to sea with it. If Jose fizzles it could close the door and send Maria into the north east with possible land fall from Virginia to New York

And the crystal ball and ouija board forecast has it visiting south jersey, DE, MD and PA, after the rope-a-dope maneuver.

It appears the coastal areas of Puerto Rico will be destroyed. Head for the hills.

bobpbx said:
It appears the coastal areas of Puerto Rico will be destroyed.
Click to expand...

If it happens, hopefully just a bit of rain. Looks like we will need to keep an eye on this one... 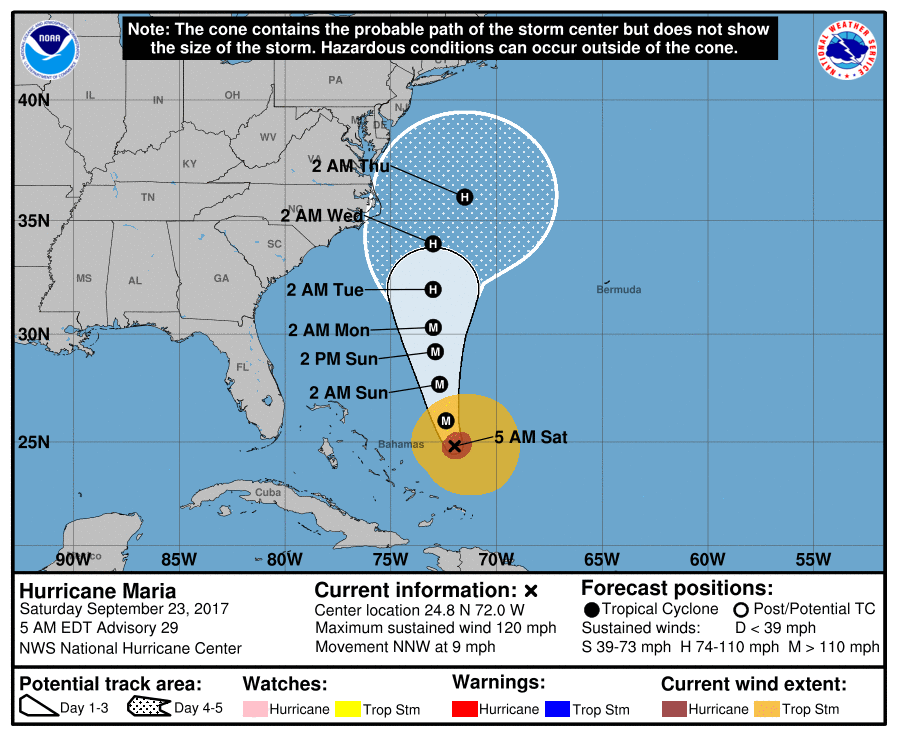 Looking like it will make a hard right around mid-week off NC and head off to the North Atlantic.

Yes, this is looking better for us. 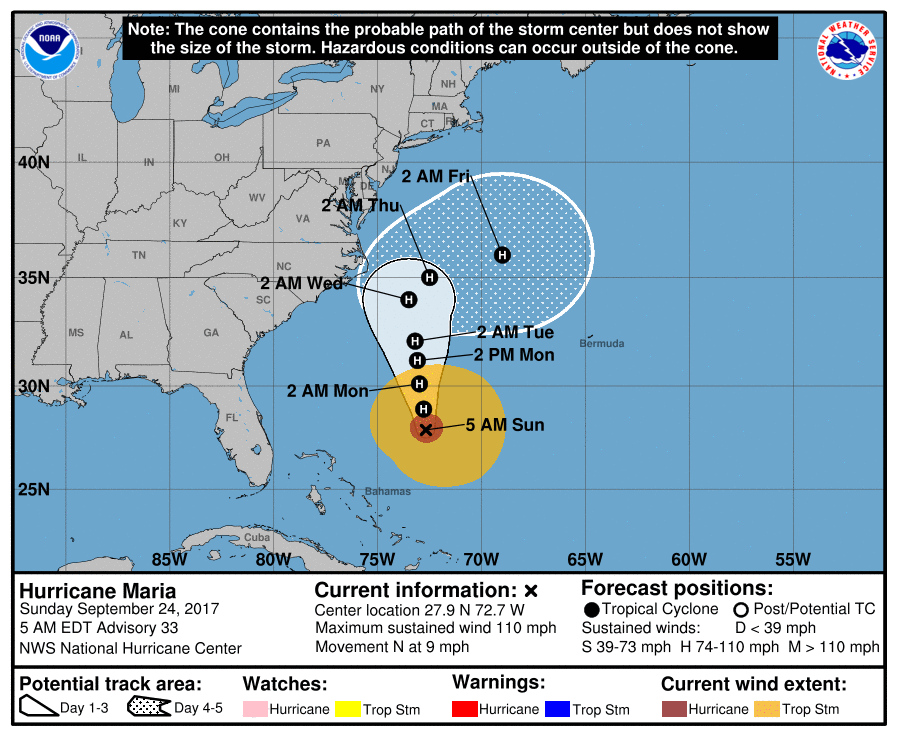 I just don't want to see the rain. The roads in the pines are fairly good right now for me to get down but once we get some serious rain I am hampered quite a bit.

Actually, the way things have been going we are headed back towards drought conditions... 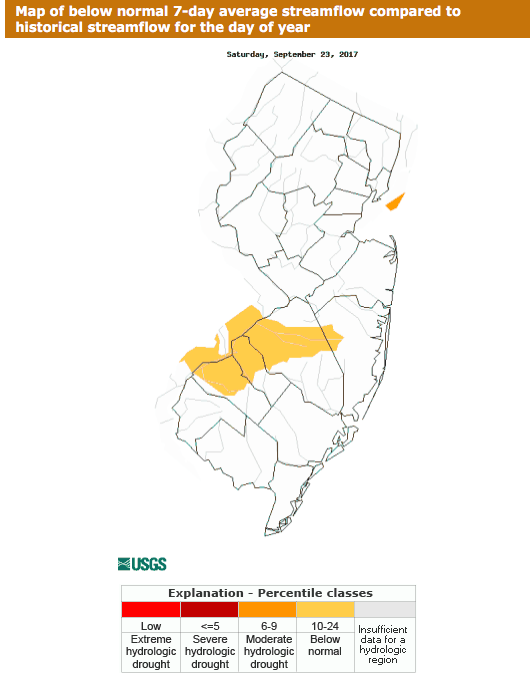