Figured I'd visit old friends.
I pop in oft to look at maps without ever signing on which is selfish.
My life has taken so many new directions many of wonder, freedom, and happiness.

Some of loss, turmoil, and sadness.
With great difficulty I had to separate myself in a sense and start anew, and it came at a cost.
I pine for old friends at times, and feel poorly for losing touch.


To be honest all the foolishness with access to our Pine Barrens had me throw hands in defeat and take to the waters especially up and around my beloved Great Bay and up the inter coastal along LBI mostly and some of the little delicacies the Mullica has to offer. I've grown a deeper love for the watershed and delicate estuaries and ecosystems that amazingly tie it all together.
Flora, Fauna, Fish, Bird, sunrises and sunsets, water like glass and water I almost lost everything to a few times.

Sea air and salt water are more my mantra now and wow, looking and my history books and finding from the waters some of the cool nooks and crannies I could never visit on foot.
Watching the instincts of waterfowl in action, the delicate Terrapin and getting up close and personal with their lifestyle.
Foxes on islands, otters and seals and seal feeding spots. Shell middens and ancient trappings.
Getting up close and personal with a loggerhead sea turtle and huge bull face skates.
The chill up your spine feel of a running with a small pod of curious dolphin out of little egg inlet and watching them do a roll and look you right in the eye.

Watching tides give and take what they want without limitations. Social distancing cast to the wind on the water despite strict water "guidelines" ... that didn't take. People not living in fear, instead... living.
Going to get breakfast or lunch or dinner or an ice cream from the water.

Seeing little communities of the same people helping each other out at ramps.
Watching fisherpeople on kayaks pulling 23 inch doormats out of the water. (kind of comical actually)

Hell nowadays I look more like a hippy surfer than a clean cut lad.
And I do all this with brighter, clearer eyes and mind than I've ever known, with a wealth of friends of like minds.

Still I journal, every day. Still I write, less oft.
Today I look at so much wonder in the world around me out there. The much needed humility of feeling so small and fragile and knowing every day I'm not the one running the show. Something much bigger than me is.

And I wish for everyone of you safety, happiness, family, and health this weekend as we celebrate our country.

Never hurt anyone to bid farewell to a day from the water, just a little closer to God 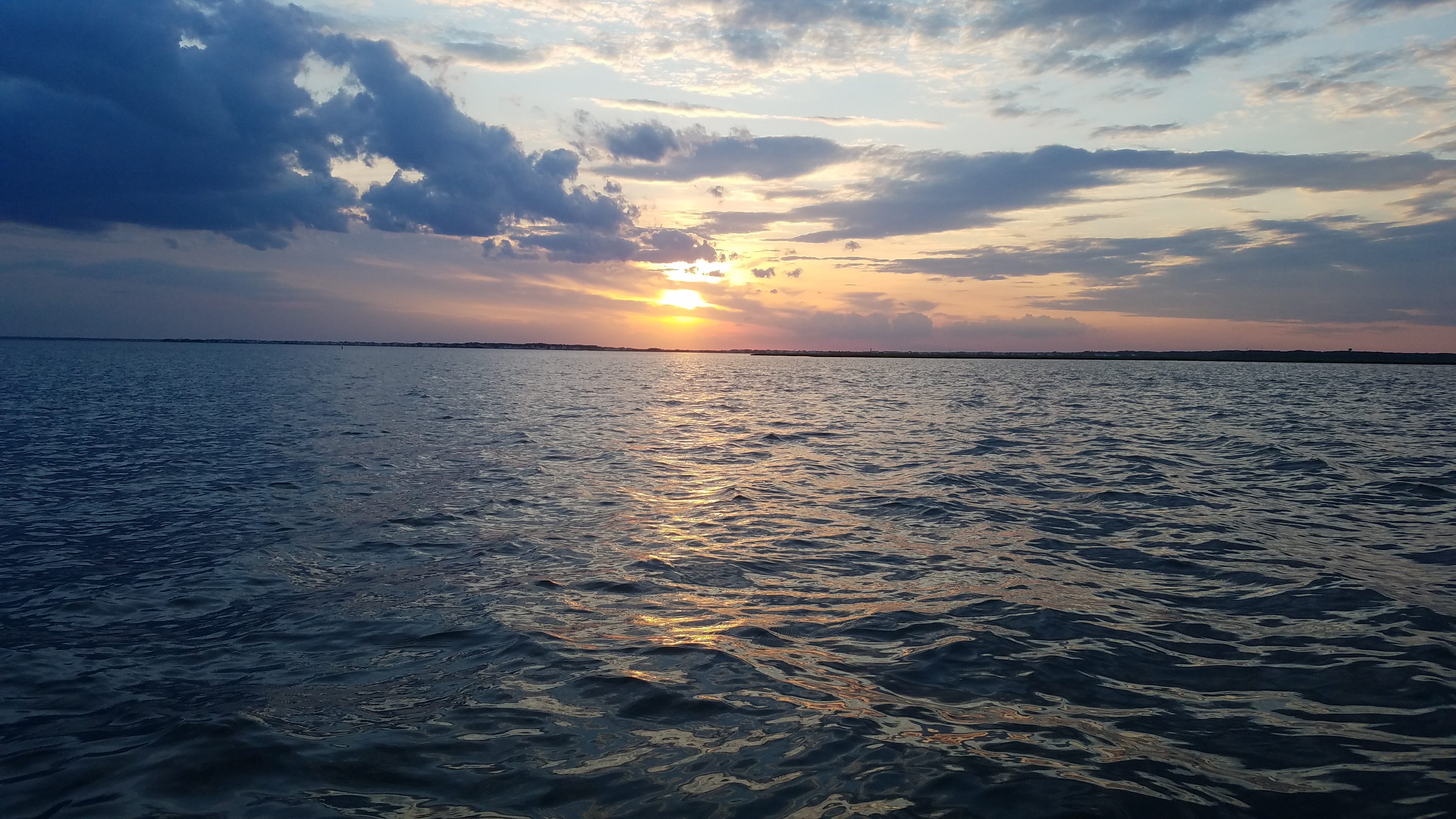 As I have said before, the best writer on this site.
Reactions: manumuskin, Boyd and RednekF350

Great to hear from you George.

Like you, both Dottie and I have a love for the salt and the ocean and bays define our summer life every year. We fish the offshore reefs, clam the sounds and crab the creeks and we never tire of it. And if we ever pine for the Pines, we can get a dose of clamdigger's itch to remind us of our chigger friends in the woods.

Love that line about living in fear!Thats all I"ve seen the last four months :-(
Reactions: dragoncjo

Ocean Seawater provides another great value. Not just salt water at home.
Get down and dirty in the surf or on the water and make short work of the woes of poison ivy and chigger bites.
There's always some poison out here waiting to cling to you and the Pestletown Pet, the lovely chigger will be happy to cause you grief.
I am normally super careful but this year I had some things I was not as patient about doing and did not exercise due diligence so I received a good collection of chigger bites. Man it's miraculous how quick it takes the grief away. Poof, diminished.
Sidebar many moons ago "little" Sammy (Now 21 3rd year Rowan pulling a 3.86 in Civil engineering. I am old

)
Digging in yard in march received a terrible case of poison from the roots. Doctors and creams and medicines only did so much.
So in that March I told the boy over a handful of days lets grab trunks and go visit Ocean City and LBI waters in March.
Medicinal and invigorating. (Oh, little Jason... I take him Tuesday to Rowan for driver's test. I am old

Scott some of my close buds fishing out of A/C of were hitting insane flounder about now last couple weeks.
My one buddies that loves his Toggies from the jetty as soon as that was over took to the waters to start pulling massive doormats out.
Another a handful of weeks ago was hitting big drum out of Brigantine.
Three weeks ago one day in the bay I saw as many people pulling up sharks (And cussing them) as they were flounder.

Not seeing the good hits on the crabbies yet, but there's time.
So far the butthole factor on the water has been pretty low and the Coasties are out in their boats keeping an eye on things. We should be cranking up pretty good after this weekend as far as population on the water though.

Was gonna go up today but I'm feeling lazy. May go up Longbeach township tomorrow for fireworks. Sadly one of the best of the best, you'd be surprised, Tuckerton, is put off this year. I always park first park spot on route 9 at Stewarts in the shade North side of lot. being a regular I've never gotten bothered leaving it there all day.
I am fortunate also to have permission to tie up at the owner's dock behind his house if ever boat parking for Stewart's is full.

Dang nice family and everyone loves Maggie the yellow Lab. All the girls are wonderful, like family.
Tip them well I say don't hold back. Then you have gadget tirelessly waving her sign for eternity.
Reactions: old jersey girl, rc911 and RednekF350

Because I am weird, I took a stroll in my upper field last night around 3:00
a.m. it's very open and literally no light pollution.
The moon was low and brilliant deep orange/red. Hope someone else saw.
It was amazing.
Reactions: Boyd

LARGO said:
Digging in yard in march received a terrible case of poison from the roots.
Click to expand...

Exact same thing happened to me in March when I dug out a red cedar stump next to the oil tank in the back yard. Awful reaction in the face and knuckles, and all this somehow triggered 2" wide hives around my waist. Awful. The only thing that soothed them was 2% menthol cream I imported from England. Ahhhh!

Moon should be red tonite.Penumbral exlipse beginning at 11:37 pm and maxing about 12:30 right about the time I get home from work.Penumbral eclipses usually look red,.

Hope so.
Moon was killer the other night.
I will be up on the Island watching the fireworks on 68th Street at Ocean Beach.

So the moon should be starting it's thing while I am there and doing it's thing as I ride home through the Pine Barrens.
I will be passing through New Gretna and on up past Batsto to Hammonton then to Waterford so my view will be mostly unpolluted.


And a very happy celebration of our wonderful country to all.

Teegate said:
As I have said before, the best writer on this site.
Click to expand...

My most humble thanks sir.
Reactions: Teegate

Hey George, nice to see you drop by!

Thank you Ben, with continued gratitude for maintaining the Gold Standard of sites for the complete Pine Barrens Experience.
Reactions: RednekF350 and Boyd

Good to hear from you, George.
O

LARGO said:
Because I am weird, I took a stroll in my upper field last night around 3:00
a.m. it's very open and literally no light pollution.
The moon was low and brilliant deep orange/red. Hope someone else saw.
It was amazing.
Click to expand...

Not weird. One of the most memorable strolls I ever had was a full moon in winter 2 decades ago. 4:00 a.m. I took the big Chessie/lab mix for a walk, hoping to hear the great horned owls calling out their territories. Moonlight eerie on the blacktop as my girl and I walked. We saw another dog on the road coming towards us, a big male I'd seen before. He just kept walking past us as though he had business to attend to. Neither dog reacted. We continued and I heard, then saw a pair of owls in a pine tree. Probably a mated pair, alternately burbling together and then calling out to warn off others.

Haven't had a better.
Reactions: Teegate

Nice hearing from you George! Hope to run into you at Lines on the Pines again

Since I remain an old salty softy below are scenes from Last Saturday at sunset.
High tide just a bit before 8 so the timing of a slack tide and water that just simply became glass made for a chance for good pics.
But while I had some daylight left and not a soul on the water I did have to light that glass up a bit, so I stopped taking pics.

Since I remain an old salty softy below are scenes from Last Saturday at sunset.
High tide just a bit before 8 so the timing of a slack tide and water that just simply became glass made for a chance for good pics.
But while I had some daylight left and not a soul on the water I did have to light that glass up a bit, so I stopped taking pics.
View attachment 13827
View attachment 13828
View attachment 13829
Click to expand...

Fantastic! Haven't smelled saltwater in a while, reminded me I need to go again. I used to wade out into the area off Stone Harbor Point (Hereford Inlet) on the outgoing tide. In waist deep water you can see fish waiting for a meal to flow by.
Also swam there on slack tide. Mostly before Memorial Day or after Labor Day when fewer idiots around.
You must log in or register to reply here.
Share:
Facebook Twitter Reddit Pinterest Tumblr Email Link
Top Bottom