Marker in the woods where 3 counties meet, Ocean, Burlington, and Atlantic

I recently read where a marker was placed where 3 counties met (I am guessing it's in the woods). Burlington, Ocean, and Atlantic (?) counties. Somewhere near Wharton or New Gretna. It was put there in the 1700's by a survey crew. Does anyone know where it's at or have a picture of it?
Last edited: Aug 30, 2015

Burlington, Ocean and Monmouth meet, but it's at an intersection on CR537 and under layers of asphalt. There may be others.

They did not have concrete in the 1700s so it had to have been a stone. The only three county marker in the pines area I know of is shown in my Avatar.

Thanks 46er, but I think it's farther south.
Teegate...I changed my post and took out the concrete, that looks right, but the one I read about was much older. I think I read it in the Bass River History.org. I will have to go look for it. I found it by mistake, after going from page to page, maybe as a note in the maps.
Thanks nguys!

I suspect I have a photo of it I just need to have the location clarified.

It can't be a county location. It has to be a township and maybe a county. I suspect since you found it on the Bass River history site it is a Bass River township corner

Here is the stone at Ocean and Burlington County and Bass River Township. 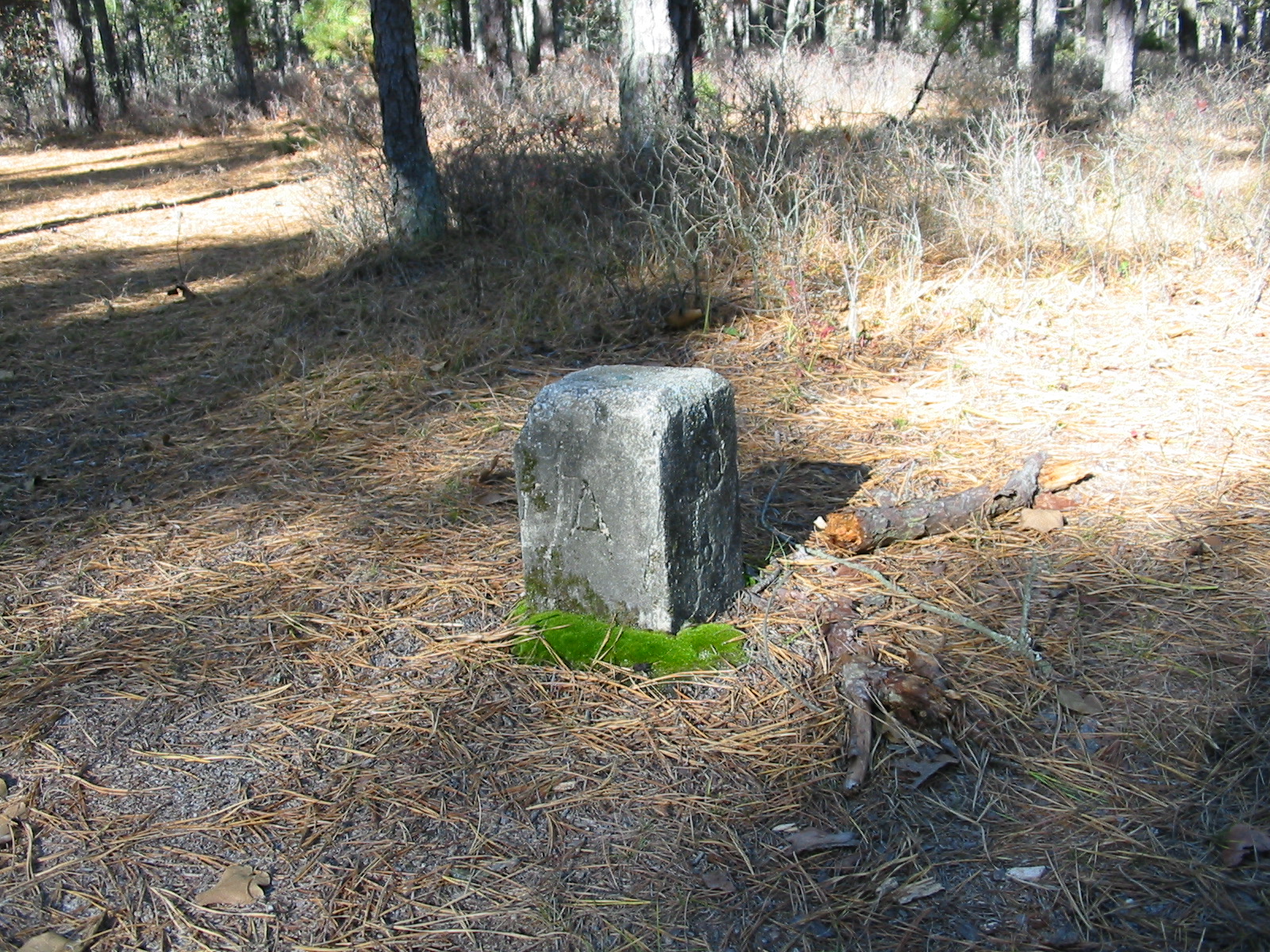 Teegate said:
Here is the stone at Ocean and Burlington County and Bass River Township.

How do you know this is an important stone? Does it have markings on it or is there a sign? And thanks!

Is this stone marked? The side looks like it has an "A" on the left side. Did you find this by gps? Thanks

coppersisters said:
Is this stone maked? The side looks like it has an "A" on the left side. Did you find this by gps? Thanks
Click to expand...

yes, an A, B and I think O. I found it geocaching.
http://www.geocaching.com/geocache/GCKQ8D_bykerladi-needs-a-paddling
I am TheBiscuitMan, check out 11/05/2004.

coppersisters said:
Is this stone maked? The side looks like it has an "A" on the left side. Did you find this by gps? Thanks
Click to expand...

The A is for Atlantic and the B on the other side is for Burlington. However, it is a two county monument.

There is no O on that monument. It is by Wescoat Bogs and is the Burlington and Atlantic county line and Mullica and Hammonton Township corner.

coppersisters said:
Is this stone marked?
Click to expand...

It is not a stone. It is a concrete monument.

Teegate said:
Here is the stone at Ocean and Burlington County and Bass River Township.

I dd not see anything on it and everything I have collected concerning it does not mention that. The marked Commissioner Stones on the Burlington County line are underground or destroyed. I will find my photos and post them.

The Burlington County line changed years ago and the original line was called the Keith Line. The only Commissioner stones still in existance in that area from 1854 are as follows.

This one under a deck. You can see the stone and the concrete monument. It is on private property. The next one up the line is missing. Around 2o years or so ago a state agency plowed a small dirt road wider for some stupid reason. The stones are always a short distance from a road and obviously it was dug up.


The next one was in a main road and had to be moved to save it when the road was widened. It is now off the road along the woods line underground. It was placed in it's original location in 1854 and was moved in the early 1930s. You can see the top of the O for Ocean County. Remember, it is no longer on the Ocean County line because the line was moved years ago. And here is the letter B for Burlington. Again, this is no longer on the Burlington County line. There are no known stones on the line from the 1700s.