You are using the NJGIN 24k and 100k maps, and their quality is terrible. I have no control over that, they are provided by the NJGIN servers. This is the very old USGS DRG (Digital Raster Graphics) imagery that was some of the first electronic versions of USGS maps and they have been discontinued by the USGS long ago. The quality has always been terrible for these, I would suggest not using them unless you have no other choice (my map only covers Southern New Jersey).

Here is my map 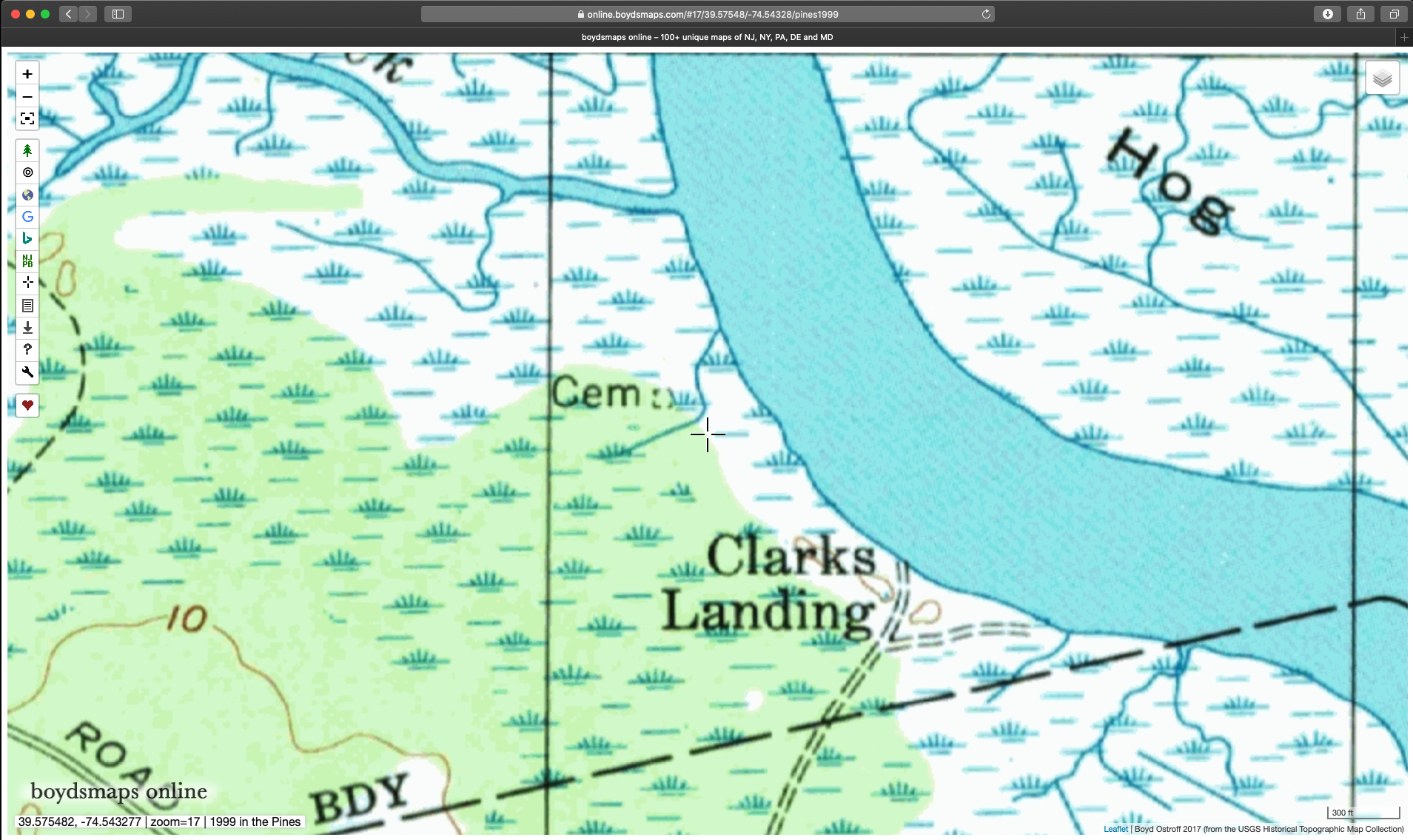 And this is the (horrible) NJGIN map 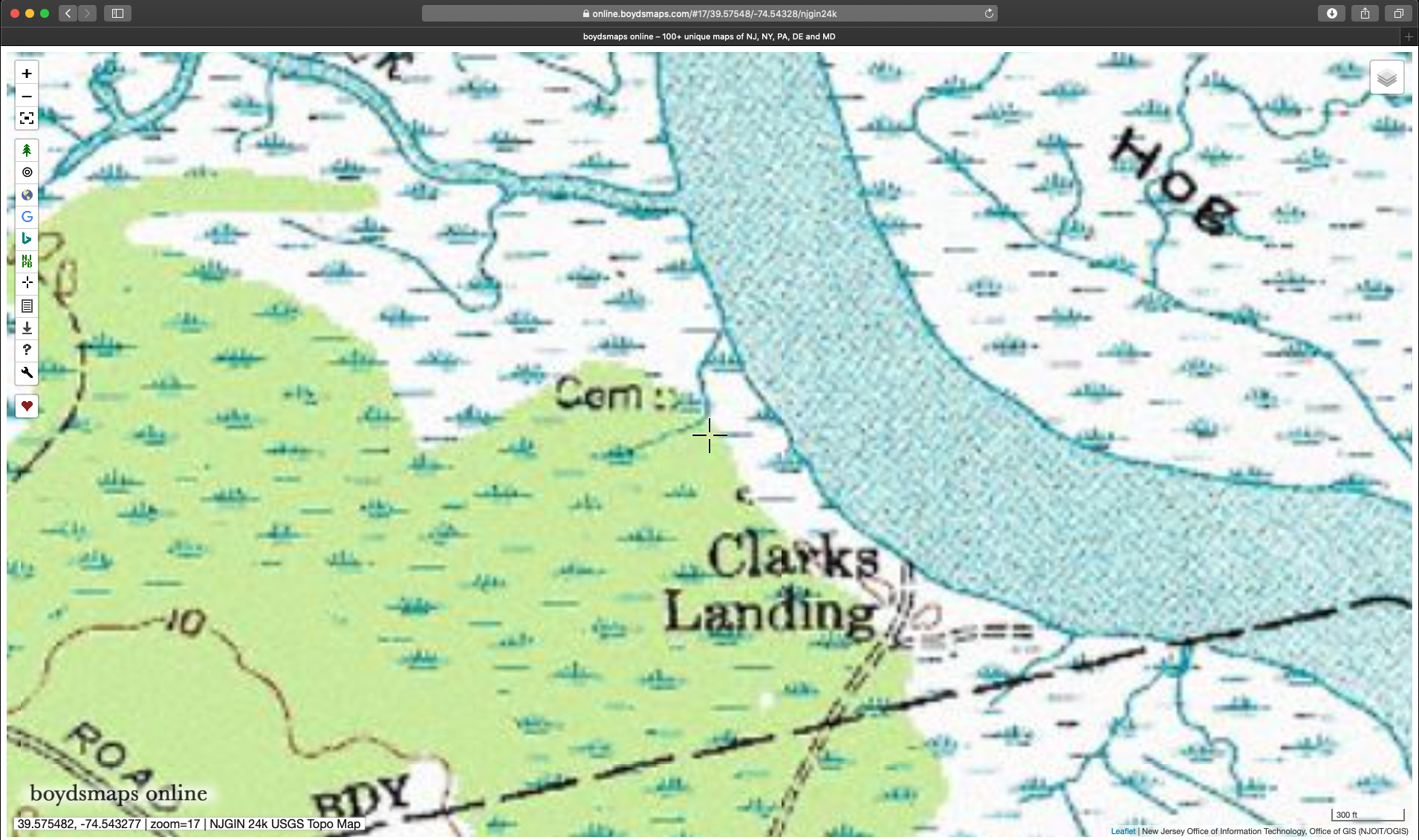 My maps were created from the full resolution (level 16) scans of the final version of the 24k topo's from the USGS Historical Topographic Map Archive. More info here:

this shows my ignorance of and inattention to your site. I'm sorry to waste your time, but very glad for your reply. I did not pay attention to the headings of each map section and the fact that Your Own maps are all only under your heading (of course, as they should be). When I saw the heading in the GAIA map of "USGS" and then saw similar listings when I opened the section below yours, I thought those were the USGS to look for. My apologies. I didn't think to click on your 1999 in the pines map to find what I was looking for.

Really, no need to apologize, that was a perfectly reasonable question. And, over time, other people will read this and say "I didn't know that!"

BTW, you can use the favorites feature to create your own custom map menu and even change the names if you like.

Yes, that is correct, "detail" was the wrong word to use. @icesailr was actually noticing the lower resolution and lower quality (due to excessive compression) of the NJGIN maps.
Reactions: icesailr and manumuskin

Awesome maps! Too bad I can't get to use them to explore those wondrous woods anymore as I now live far away. I used to use big paper USGS maps that I coated with waterproofing (and didn't fold up very well anymore after the coating) , that and my compass.
Reactions: Boyd

manumuskin said:
a 100K topo would have less detail then a 24 K topo since the 100 K covers four times as much area as a 24 K topo does
Click to expand...

Was just looking at this again and you have described the difference very well, but this part is wrong. It's a common misconception, so I created the example below. The 100k topo actually covers sixteen times as much area as the 24k! Look at the grid squares on the 24k map, they are the same size in pixels as the whole 100k map. BTW, that's a 1-kilometer grid which is very cool - didn't know the USGS was using the metric system on these maps 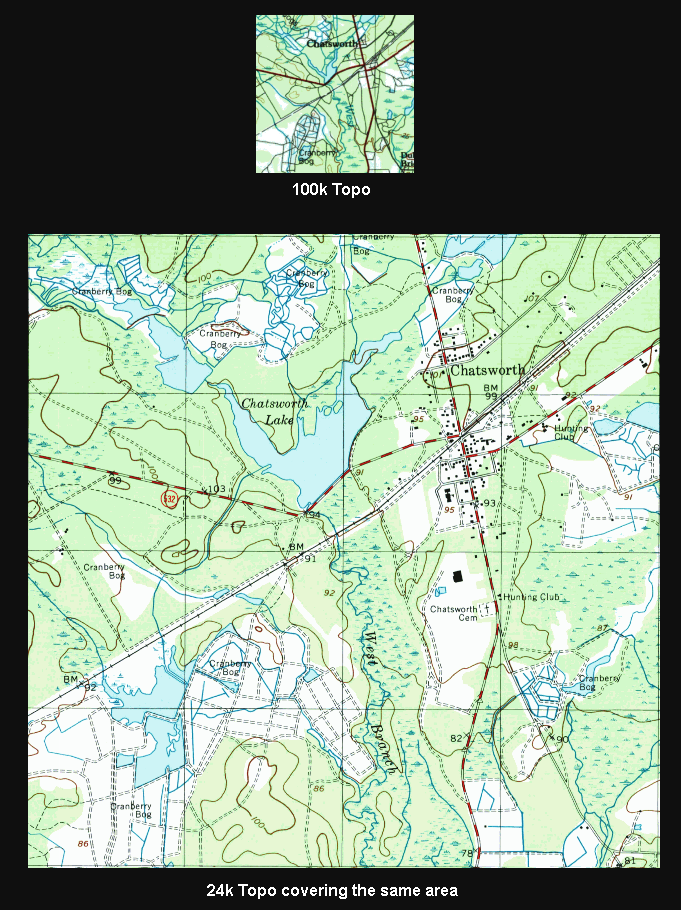 Is it possible to load/combine gpx or kmz files onto your mobile or computer program to see the track on one of your old maps ?

Sorry, I don't understand your question. What "old maps" are you talking about?

There is no way to load tracks at either boydsmaps online or boydsmaps mobile if that's what you're asking. However, in the future I will be adding the capability to import tracks into the mobile app, but it will be awhile before I get around to that, at least a month or two. You could download my maps from boydsmaps.com and use them with a number of other apps that would allow you to import your tracks. But, as posted elsewhere, I am discontinuing all these maps soon and will no longer support them, so you will need to figure that out yourself.

Thank you. That answers my question.
I did just mean "Your" various old maps when using your program.
I'll look into downloading one of your maps per your suggestion,
in case I can import into the tracker I use. Gaia GPS

icesailr said:
I'll look into downloading one of your maps per your suggestion, in case I can import into the tracker I use. Gaia GPS
Click to expand...

Gaia has been problematic. See this thread, I tried working on this with @WaretownMike but he never followed through. The last post in this thread includes a small test file you could try. However, like I said, I am not supporting those maps anymore, so I'm afraid you're on your own...

is there a way to get the pine barrens HD maps in to Gaia?