You are using an out of date browser. It may not display this or other websites correctly.
You should upgrade or use an alternative browser.
J

I came across this article claiming that the mill pond at Weymouth was actually a lake a few miles long.


The Magazine of History with Notes and Queries, Volume 24

The tragedy of a town's death is written plainly across the landscape of Weymouth, N. J., where once industry hummed in one of the busiest little manufacturing settlements of South Jersey. Fifty years ago Weymouth, known now only to deer hunters, who make the deserted village their headquarters for a few days in the fall and to auto- ists who catch glimpses of tree-hidden ruins as they speed by on their way to the seashore, was the thriving centre of a great paper industry, and had proud ambition of some day becoming a metropolis.

Few now living remember those days, but among the survivors of the town's greatness is Postmaster A. G. Stewart — for Weymouth still claims a post office, and its venerable postmaster claims a long- term record of forty-five years of continuous service. He is said to have been in office longer than any other postmaster in the United States, and he has the satisfaction of knowing that he has no opposition for reappointment when his present term expires. His is the only mo dern dwelling in the town proper, although summer residents have erected a few bungalows along the shore road in the outskirts of the town.

What was once Weymouth's residential section is back from the present road, hidden among the bushes and young trees of the typical pine-belt wilderness. Here is what is left of the dwellings that once lined the streets of a busy manufacturing village. Roofs of some have fallen in, side walls of others are tottering and, except for the four or five that are occupied which are Postmaster Stewart's only neighbors, these once pretentious houses know no human inhabitants except when the deer hunters make the town their rendezvous and some of them take up their temporary abode under the leaky roofs.

The wilderness is fast swallowing up what is left of the old village. Some inhabitant, more industrious than others, planted his corn last year in what was once the central village street. The chief monument of the town's past is the picturesque ruin of the great mills of the Weymouth Paper Company. Pioneers of an earlier generation saw great opportunities for the manufacture of cheap paper from the great forests of central New Jersey. The Egg Harbor River was dammed to form Weymouth Lake and supply waterpower, and the industry developed rapidly. Pine was not much of a success as pulp material, but other varieties of trees growing in abundance in this section were available and were made into a product that found quick sale. Salt hay entered largely into the manufacture of paper in the mills about the centennial year.

Promoters of the industry became wealthy, the business paying big profits, but efforts to branch into other fields of commerce proved fatal at the very height of the paper mills' prosperity. The chief own ers became interested in constructing the famous narrow-gauge rail road across New Jersey, tying up most of their available funds, and pledging the mills as additional security. Forced to the wall later by persons who obtained the railroad for the Philadelphia & Reading, the original promoters lost not only their fortunes, but the mills. The mills were closed temporarily, it was announced, but they never have been reopened, although the profits of the last year's business are said to have exceeded $80,000. Fire later invaded the main buildings, which were used at times as sawmills, but even this industry has passed into memory.

Weymouth Lake, which furnished the waterpower for the old mills, has become a famous Mecca for anglers. Its waters abound with pike, pickerel and bass, and in season it is also famous for the wildfowl gunning it affords sportsmen. The beautiful sheet of water fronts the town and stretches away between pine ridges for several miles. On its sloping shore to the left from the town is the old mansion of the for mer proprietors, now another pathetic reminder of the days gone by. The lake and its waterpower are considered valuable assets of the pro perty and are said to be held at a high valuation by the present owners. There is talk, even now, of rebuilding the mills and utilizing this water- power for electricity to supply many towns in Atlantic and Burlington counties.

Postmaster Stewart believes prosperity will come again, to Weymouth. He, the only man who has remained faithful to the old town, dreams of a revival of its industries and the eventful development of the once-planned metropolis.

Interesting article. The mention of pike being fished for in the lake caught my eye. Perhaps they were stocked? Or maybe just plain old misidentification. Wouldn't be the first time.
Reactions: manumuskin

I believe the lake was dammed to supply the furnace works, well before the switch to paper manufacture. 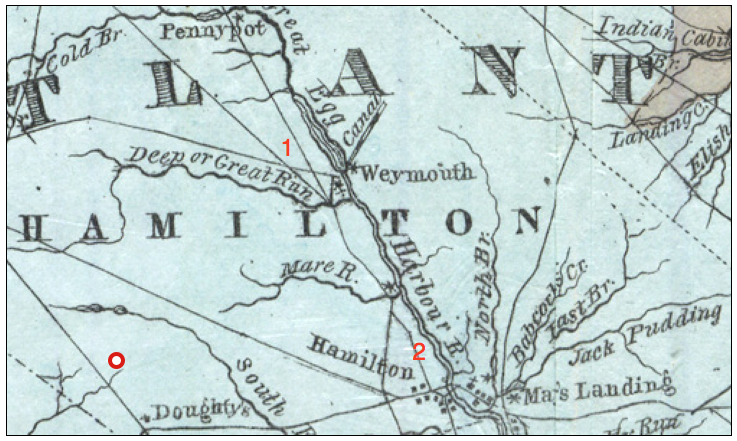 ​
Vermeule, C.C., 1894: Report on Water-Supply, Water-Power, the Flow of Streams and Attendant Phenomena. Volume III, of the Final Report to the State Geologist. Trenton, NJ: Geological Survey of New Jersey. 352 pp.​
I grew up calling in Buckhorn (red bullet) at the Calf's head (for head of Calf Branch, a source of the Manumuskin) calling a pickerel a pike.

The ruins of the furnace masters house and a couple others are across the street (upstream) from the city park.There are some really big trees upstream as well.It's some kind of preservation property up there and is legal to walk through.

I grew up calling in Buckhorn (red bullet) at the Calf's head (for head of Calf Branch, a source of the Manumuskin) calling a pickerel a pike.

I've heard pineys and semi-pineys refer to pickerel as pike on many occassions. However, the article Jason cited did list pickerel, pike and bass so it is possible the bass and actual northern pike were stocked.
Reactions: manumuskin