You are using an out of date browser. It may not display this or other websites correctly.
You should upgrade or use an alternative browser.
T

In the past month I have seen a picture of a Martian sunrise from the Mars land rover. Even better, I now see a picture of Ultima Thule, taken from the New Horizons Spacecraft. An ice formation out past Pluto. Yet we cant use a camera to see on the other side of a bunch of trees. I am sorry... I just ain't buyin' it.

Toothy Critter said:
I am sorry... I just ain't buyin' it.
Click to expand...

I there lies the heart of the issue; m o n e y

The cameras on those space shots cost a bit; I don't think Murphy could tax us enough to pay for one

The cameras on those space shots cost a bit; I don't think Murphy could tax us enough to pay for one

Let's keep things in perspective. A fire monitor doesn't need to be mounted on no New Horizons Space Ship or Mars Land Rover. And it could have a tad less megapixals too

The threat of a destructive wildfire in South Jersey is growing. Is enough being done to prepare?

Has anyone seen a good map of the planned clear-cutting areas around the Bass River fire tower? I thought I had one, which I made from the maps in the document linked to on the first post in this thread. But I was just out there, and there are new red stripe markings on some trees. I saw 4 trees in a line with red stripes, and some with double stripes. Maybe 1 stripe for an edge, and 2 for a corner? I took some pictures and geolocated them, but they don't fall on the edges of what I thought was the boundary.

Looks like they are moving along. I will have to stop in there when they are done.

They might be marking trees with nests and possible nesting areas for Barred Owl and other T&E avian species. No trees are supposed to be cut until November 1st to April 31st.
Reactions: Teegate

Has a contract been awarded? Just wondering if the timber co. is paying for the trees or is being paid by the State,
L

I don't think they are marking nests, because the first 4 trees I saw with single red stripes were in a mostly straight line. You can see them here, although 3rd and 4th are hard to see. 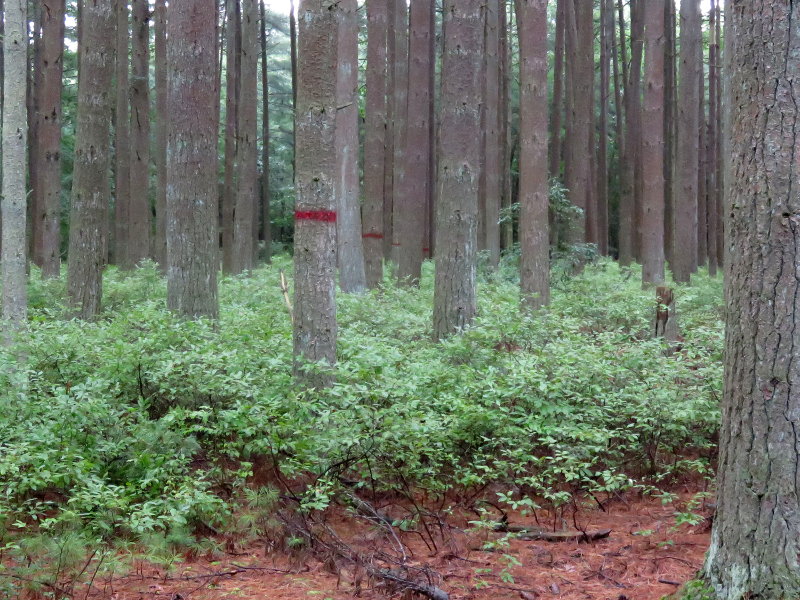 My understanding is that they are at or near the RFP stage. It was suggested to me that maybe they are marking out the work area so they can bring in potential bidders. So no, no contract award.
L

I heard that the tree clearing starts next week, Monday 12/16. After this week's 6-day Firearm Hunting season is over. I don't know anything more about it.

Thanks for the update.

The work started on areas #1 and #2 on the map, across E. Greenbush Rd from the Bass River Maintenance Shop and Fire Tower area. When I drove by, there was just one guy working. He was just quiting for the day and we talked a little. He was very friendly and knows a lot about trees and the Pinelands. 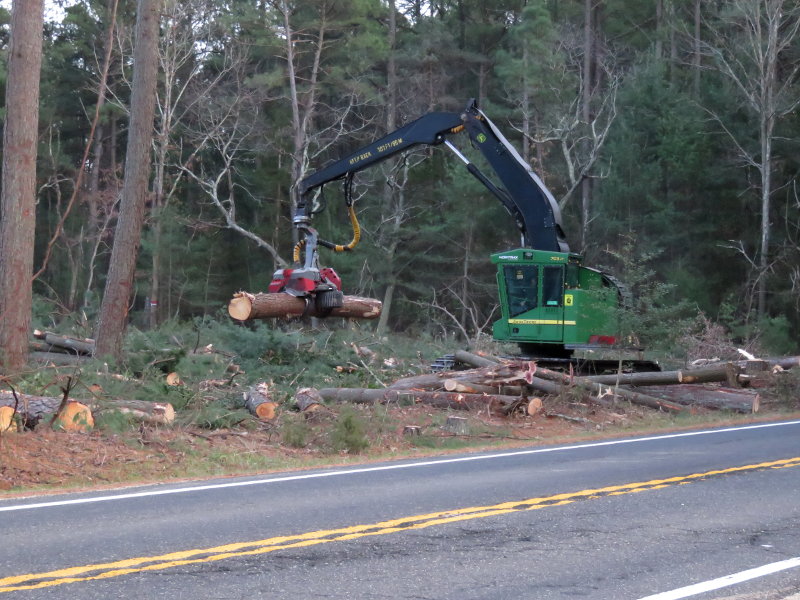 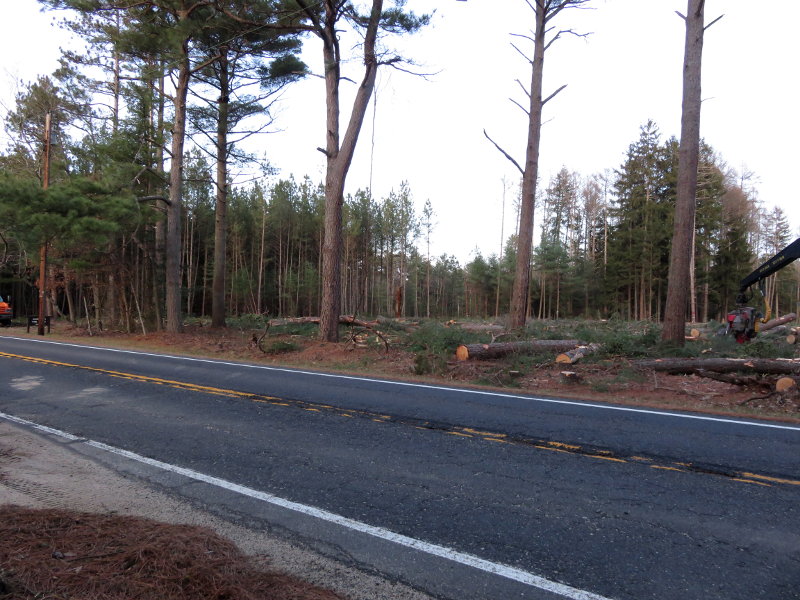 Hard to see in the scaled-down photo, but his John Deere machine has a Smokey Bear - Prevent Forest Fires decal just behind the cab.
Reactions: old jersey girl, Boyd, h2ochild and 1 other person

Thanks for the update. On our ride home today Jessica remembered it was starting, and if she had remembered earlier we would have gone there.

lj762 said:
The work started on areas #1 and #2 on the map, across E. Greenbush Rd from the Bass River Maintenance Shop and Fire Tower area.
Click to expand...

I think the Larch are in that area. Hope they escape the saw, but they do get pretty tall. Those cut tree's would sure make a nice log cabin

You might notice in the second photo above there are 4 visible trees still standing, right against the road. Those trees are really close to the power line, and a lot taller. But the guy working there said he wasn't concerned, and he could take those down without any problem.

46er said:
I think the Larch are in that area.
Click to expand...

This should help with identification.

Any word what company won the contract and how much the State is being paid? This info should be published somewhere.

Teegate said:
Thanks for the update. On our ride home today Jessica remembered it was starting, and if she had remembered earlier we would have gone there.
Click to expand...

are they cutting over the inscribed stone close to the road across from Absegami?

manumuskin said:
are they cutting over the inscribed stone close to the road across from Absegami?
Click to expand...