"Iron made from bog ore will often contain residual silicates, which can form a glassy coating that grants some resistance to rusting."

Be this a true statement? I wouldn't expect this to be true, based upon what I've seen. But I ain't no chemist.

I've heard many statements to that effect in the past myself, but without the explanation you included as a reason why. It seems to make sense and I'd be curious to get a more definitive explanation myself.

I wonder if that was a quality that made water pipes from the bog iron furnaces in the pines popular?

You always ask good questions! Why is bog iron so rust resistant? I’m no expert at geochemistry but here’s a possible explanation. It may have more to do with bog iron’s biological formation then with silicate coatings. It's already been rusted once before. Some power line poles are super rusted, armoring them from further corrosion. If memory serves me, at the microscale at least, silica can actually be a rust catalyst (hence the red grain coatings of Bridgeton sands). I’m short on time, so suggest you read these old posts for details:


http://forums.njpinebarrens.com/threads/cedar-water-potability.6453/#post-76995​
​
According to Hall (1899: 25, The Daily Union History of Atlantic City and County), "Bog iron, formed by chemical action, is without the slag or rock which characterizes the ore from the mines, and is of a superior quality." This suggests that bog iron contained less and not more mineral residuals than mined ores. I hope this helps.

It was also interesting that Hall (1899: 25, Sketch of Old Weymouth) also noted that "the streams and swamps carried very much more water than since the iron horse came snorting through the land." Huh, I don't know how I missed that passage.

Spung-Man said:
It was also interesting that Hall (1899: 25, Sketch of Old Weymouth) also noted that "the streams and swamps carried very much more water than since the iron horse came snorting through the land." Huh, I don't know how I missed that passage.
Click to expand...


Was Hall correct about that? My impression was that there would have been more water back then than now due to a lower water table.

I went back to the original quote, which is on page 23, not 25. My bad. In its entirety, "The original heavy growth of timber covered the country and the streams and swamps carried very much more water than since the iron horse came snorting through the land, blowing sparks and landing the careless pioneer from whose clearing many a destructive forest fire has spread, working havoc among the trees and consuming the vegetable accumulations of centuries on the surface of the soil."

The sentence is long-winded and awkward. The word than is used is used to introduce a second element in a comparison. He is comparing pre and post railroad Pine Barrens surficial water conditions. I read it to mean there was more water before the fire increase, not less. What is the group wisdom on this one?

Hall was a newspaper man, not a hydrologist. That said, many of the old timers were great observationists even if they lacked scientific training. Experiential knowledge is still considered a valuable complement to scientific knowledge. Most of the literature I have indicates a steady regional drop, not a rise, occurred since settlement.


Accounts of the region’s desiccation go back to the time of Peter Kalm, the botanist. Upon his visit to Raccoon (Swedesboro) in November 1748, he recorded some accounts of smaller lakes, brooks, springs, and rivers drying up over a period of many years (Kalm 1770: 185-187). The flow of larger rivers was reported to have remained about the same. To Mickle (1845: 150), “the fall of the waters, not only of our inland ponds, but of the creeks [and of course the river with which they connect] is a well established phenomena. In nearby Pennsylvania, the disappearance of creeks and “the diminution of waters [generally], which formerly abounded in this part of America” (Brissot de Warville 1792: 341) was attributed to deforestation. Abbott (1907: 62-65) noted the drying of brook streams over centurial to millennial timescale, likely caused by deforestation, land drainage and field cultivation.”​
​
It was great to cross paths in the Arts & Sciences parking lot at Stockton last week. Too bad you hard to work that day. We had an extra seat in the field trip van and big heavy shovel with your name on it! Next time.
S-M

Spung-Man said:
The sentence is long-winded and awkward. The word than is used is used to introduce a second element in a comparison. He is comparing pre and post railroad Pine Barrens surficial water conditions. I read it to mean there was more water before the fire increase, not less. What is the group wisdom on this one?
Click to expand...


I don't think he is correct if that is what he means. Trees provide a outlet for water transpiration from the soil. If the trees were bare of leaves, there would be more water groundwater to flow to streams. No?

I know it sounds counterintuitive, but that has been the historic trend to groundwater - downward. Don't forget, lush vegetational growth proceeds wildfires. It is a robust response with high rates of evapotranspiration. Also, the climate has been steadily warming since the Little Ice Age, the cold period between 1550 and 1850. Also, coincident with the advent of railroads came residential, commercial, and agricultural development. Well drilling increased to support an expanding population. I would imagine even machinery like steam-powered sawmills, factories, and locomotives were thirsty beasts.

Hall wrote his passage in 1899. That was at a time when numerous artesian wells were being drilled to provide water from the 800-foot sand unit of the Kirkwood-Cohansey aquifer. The water level in the once artesian aquifer has declined one to two feet annually since the 1890s. In the Mullica River basin, a historic record of head decline of ~1.0 to 1.5 m (3 to 5 feet) had occurred between the late 19th and mid 20th centuries (Rhodehamel 1973: 24). Even then water was being used in an unsustainable way.

According to a new report (2013) the total cumulative South Jersey groundwater depletion for 1900–2000 is believed to be 1.3 cubic kilometers.

This amount is according to USGS estimates based on Konikow and Neuzil (2007) methodology.​
​
A method to estimate groundwater depletion from confining layers​

I have long argued that the Pine Barrens shallow groundwater table has been slowly dropping due to over pumping causing shallow wetlands to dry up. For example:​
​
01-26-09 - http://forums.njpinebarrens.com/threads/a-new-fight-over-how-to-save-the-pinelands.5196/#post-58550​ 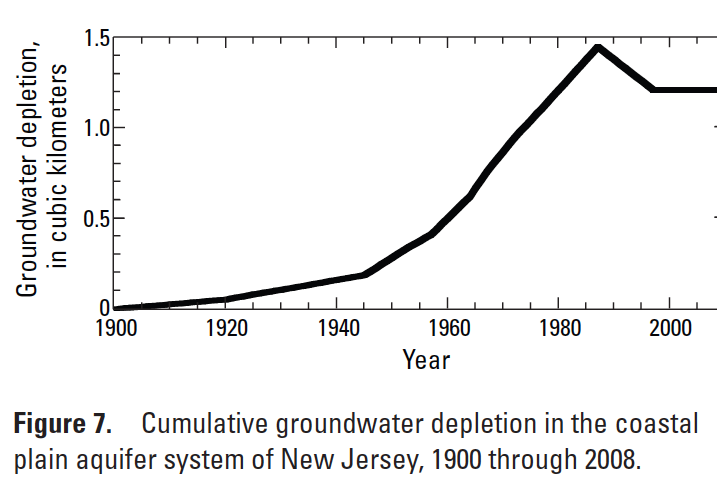 Nobody who travels the barren regularly can deny that is happening. Very nice Spung-Man!

I can remember, when I was a lad in the 70s, seeing fresh water flowing out of the ground in many locations. One such spring was by Barnegat. The fresh water would spurt out of the ground two or three feet high. Not any more!
You must log in or register to reply here.
Share:
Facebook Twitter Reddit Pinterest Tumblr Email Share Link
Top