Buzby's is in too good of a condition to knock down and redevelop. Remember, it's about $500k for the building, so you'd have to knock it down and be able to build something in it's place to make that money back plus a profit. I already think that $500k for Chatsworth is ridiculous - I don't see anybody buying $3-400k condos downtown (which is what a developer would probably want to replace it with.)

Everyone seems to associate redevelopment with run-down neighborhoods and dilapidated structures. That is no longer an accurate description of the term. The designation has become much more liberal as to what can be deemed in need of redevelopment. In a Planning & Environmental Law article titled "Has the Mount Laurel doctrine delivered on Smart Growth," Kinsey (2008: 7) wrote:


“A 2003 amendment to the Local Development and Redevelopment Law used the term ‘smart growth principles’ to add an absurdly vague criterion for designation of an ‘area in need of redevelopment’ that could potentially trigger the exercise of local government’s power of eminent domain.” ​
Anything within a Pinelands Village can now be redeveloped, including historic structures, wetlands, and habitat with documented threatened and endangered species. Resolution No. 118-2005 stated,


"the proposed Richland Village Redevelopment Area is suitable for commercial and residential development and due to existing conditions where lands have remained vacant and underutilized for a period of ten or more years cannot likely be developed through the instrumentality of solely private capital..."​
It is simply a slick way for politicians to help developers circumvent the CMP at the public’s expense.

Yes, but I'm speaking towards the economics of it. Marilyn is asking a ton of money for the property, which does not make it a good candidate for redevelopment. You'd have to knock it down and build something that you could sell for far more money, which is very unlikely given the location and the real estate market right now.

You seem to be missing my point. While this is all hypothetical, here's what could happen if Smart Growth came to Chatsworth. Let's say nobody could afford to buy the general store, and the property remains vacant for an extended period. Buzby's could easily become part of a bundle of parcels deemed in need of redevelopment (i.e., underutilized). Remember, Pinelands Villages are now growth zones, places where the Pinelands Commission has said it is "obligated" to sewer and water.

In National Geographic Adventure (September 2007) Chatsworth was named as one of the "Top 50 Adventure Towns" to "Live & Play Now" in the USA. Don't think this fact escaped land-speculators' attention. Pinelands real estate values have outperformed those of comparable properties located just outside the Reserve. What developer wouldn't want to put up a bunch of mac'mansions?

In acquisition of real property for redevelopment it won't matter what Marilyn wants for her land, but what a municipally-appointed qualified appraiser decides is fair compensation. Eminent domain is in these plans. Why include something you won't at least try to use? We learned in an earlier post that there is no guarantee that a private developer will conserve the structure. Even if kept intact, Buzby's may end up as rental property along with strip malls and apartments erected in the name of economic progress all owned by a single corporate holding company.

Ah yes, we might just bring back the Pinelands tradition of feudalism, a time when a lord (iron-master) owned the land and his minions provided services. We open Pandora's box through redevelopment. Half my Village's center is publicly owned, and the municipality has sent out this nation-wide request-for-proposal to entice a big developer:


http://www.buenavistatownship.org/pdf_files/Richland Brochure/Final_RFP _3-09_ .pdf​
Richland Village was touted as “a prototype for the immediate region as well as the State” (Karabashian/Eddington Planning Group, 2006: 1), so I feel it fair to use as an example of what can happen in the Pines.

Directly across the street from Buzby's and up Route 532 a short ways, I recall seeing a sign posted with a picture of a small development on it. I don't know the specifics of the building plan, but it looked to consist of 5(?) houses built on a cul-de-sac. There is also a corner lot, approved for building just up the street, past the EMT station. Change is in Chatsworth's future. The economy, being what it is, is just putting off what will eventually happen. I hope it isn't for the worse.

That's why we have a Comprehensive Management Plan, to preserve, protect, and enhance Chatsworth's environment, keeping its Pinelands character. It is but one of 47 Villages that the Pinelands Commission has stewardship over. Follow the money. Look to see who bought land that is now or will be found in-need-of-development. Do you think a New York real estate attorney or a Florida developer gives a rat's ass about Buzby's? I learned a long time ago that land tends to go to its highest value. Redevelopment favors big outside developers, often at the expense of local residents. We need to let the Commission know we care.

Spung-Man, I can relate. In the last twenty five years, every available space, in Hamilton that could be built on, has been utilized. Farmland that had family roots going back two hundred years, gone. Raceways and fair grounds razed for developments. Historic houses, either demolished or moved, for malls and retirement communities. All of the open space no longer exists. It is gone forever. What is worse is the impact that all of this growth has had on the quality of life. Traffic, population numbers and crime all have a negative effect. I wish people could understand, how growth without the interest of the local residents, is growth that isn't wanted. Ask anyone over the age of thirty-five in Hamilton and they will understand what I am saying. I hope people who have experience similar community growth will express concerns and prevent growth that does not have the immediate interests of the residents were this proposed building is planned. It is important for citizens to stand up for their future. The action that is taken today, is more important than they can imagine. Once the character of Pineland Villages gone, it is gone forever. I agree, we have to let the Commission know we care.

Gibby said:
Once the character of Pineland Villages gone, it is gone forever. I agree, we have to let the Commission know we care.
Click to expand...

Gibby, what does Smart Growth (and redevelopment) provide? A major selling point, according to the USEPA, is The Business Opportunity for Developers and Production Builders:


http://www.epa.gov/smartgrowth/sg_business.htm​
• What is the Pinelands Commission's position on Smart Growth?


“Robert W. McIntosh, who has served as the federal representative on the Commission since 1995, lauded Stokes as a leader and innovator in smart growth.”​
http://www.state.nj.us/pinelands/images/pdf files/press/PR_PinelandsDirectortoRetire.pdf​
• Charles Siemon, Esq., the 2011/12 John M. DeGrove Eminent Scholar Chair in Growth Management and Development, gave a riveting talk at the January 14, 2011 Pinelands Commission meeting. He helped set up the Pinelands National Reserve. His position is Smart Growth should not be used in the the PNR. I truly hope the Commissioners were listening.

• The area around Robbinsville won a Smart Growth award:


http://www.njfuture.org/smart-growth-101/stories/2010-award/robbinsbill/​
Is that what we want here too?

The concept drawing of Richland Village is sad. It looks like one of the "towns" from Disney World.

I’m not too sure what you are trying to convey with the map link, but I'll provide annotation. It is the growth areas depicted in red that cause concern. Those are 47 Villages that cover over 26,000 acres. Imagine expanding the Hamilton-Egg Harbor Township growth area by a third, that's the amount of land set to be sewered. In comparison to the PNR, the total Village area may seem small, but culturally they are the heartbeat of the Pines. People still hunt, fish, farm, can, cut wood, and preserve a way of life in character of the area. They also contain the bulk of the PNR cultural treasures. According to the Pinelands Commission (1988: vi, Pinelands Villages and Towns: Historic Area Delineations),


“The Pinelands settlements are Pinelands history in microcosm...Virtually the entire range of significant cultural activities - rural industries such as sawyering, ironmaking and glassmaking, cereal, truck, livestock and berry agriculture, maritime pursuits, religious, ethnic and social manifestations, political infrastructure, etc. is reflected in the physical remnant of these varied communities.”​
So when Manumuskin asks about the replacement of our cultural center, the Richland Fire Hall:


Manumuskin: "That is ashame.we had several family christmas parties there as well.I live a half hour from there but the folks that ran it were real nice and the price wasn't bad so for several years in a row we rented it. Are they replacing it?"​
http://forums.njpinebarrens.com/threads/sweet-sassafras.7616/#post-91381​
The answer is yes and no. A modern firehouse was built, but without a social hall. Cultural surveys are waived in Richland Village, and pleas from the community to save it were ignored. It was our equivalent to Buzby's. 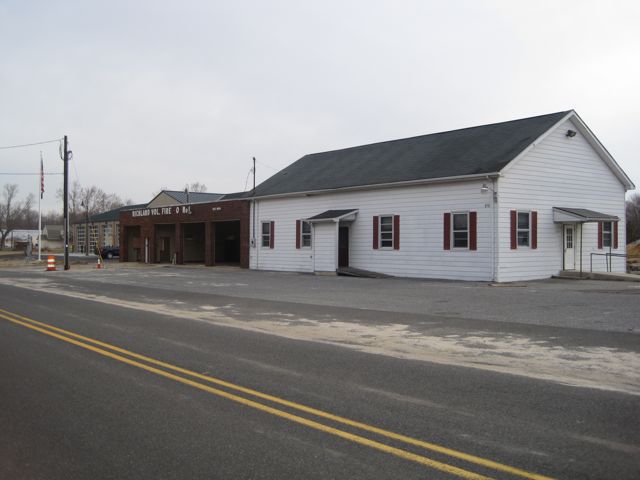 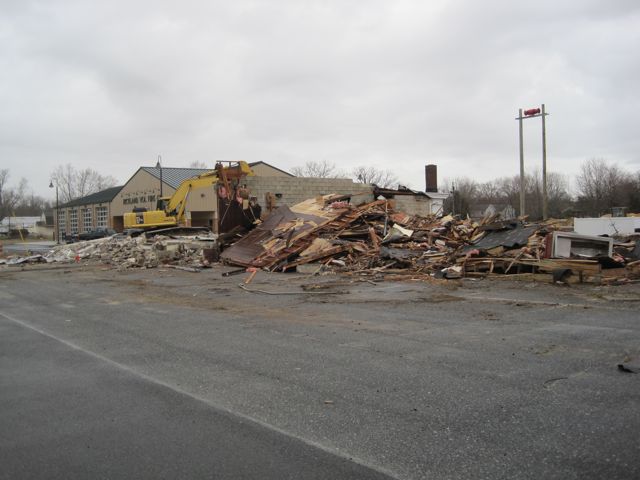 It's gentrification. Do you think the people moving into town-center projects, the "New Urbanism" as it's called in our redevelopment plan, have any sense of this place?

Spung-Man, I was going to question if any impact studies or cultural surveys were done, but your last post confirmed my suspicions, that nothing of the sort happened. Do any Special Area Ordinances (SAO) exist in Richland Village, that could possibly be used as leverage to limit development?

It can be beat, as was shown in West Long Branch where the city wanted to take homes under ED to build new homes. Just need a good lawyer.

Gibby said:
Do any Special Area Ordinances (SAO) exist in Richland Village, that could possibly be used as leverage to limit development?
Click to expand...

We have the protection of the Pinelands CMP, and the Commission’s 1988 report cited above. There are no cultural survey exceptions for major development in a Pinelands Village. However, within “historically sensitive” areas a survey can be waived – specifically for minor development – “if the proposed project will occur on a lot where there is no evidence of prior occupation (either historic or prehistoric) or where more recent development has obliterated earlier remains (cf. ‘survey exemptions,’ N.J.A.C. 7:50-6.155(b) (NJPC, 1988: vii–viii).

The fire hall is public property that was torn down with Federal funds in an “historically sensitive” Pinelands Village. This is rather bizarre since much of the promotional literature touts an Historic Richland Village. This sets bad precedent for Smart Growth projects in other Villages. To quote Dr. Phil, “The best predictor of future behavior is past behavior” and “We can’t change what we don’t acknowledge.” Could this be Buzby’s fate too?

The above mosaic shows: 1) a sign enticing tourists to visit historic buildings that are falling or are torn down; 2) mistakes like this, Richland “Dollar” Store, indicate a lack of cultural sensitivity on the part of planners; and 3) two of multiple broken promises from Design Matters, published by the Regional Planning Association, the NJ Mayor’s Institute, and the NJ Office of Smart Growth, September 2005.

Sorry about the demolition Spung-Man. It is unfortunately the sign of the times


"The little Chatsworth store has long been the heart and soul of the Pinelands, a local gathering spot that shaped John McPhee’s The Pine Barrens, a classic 1968 book..."

I first came upon Busby's back in 1969 shortly after reading Herbert Gordon's intriguing story about the Barrens in the NY Times, here:

And once I went down there I became enchanted. I later read John McPhee's wonderful book that so truly captures the atmosphere of that extraordinary place.
R

That's more in line with reality. Marilyn put way more money into the place than what she ought to have. The upside is that whoever buys it will be getting a hell of a deal. Geothermal heating and cooling!
Reactions: HeathenClerk