Scratch that, its still here.

Had a very heavy t-storm move thru here this morning. Day turned into night with 1/2" hail and heavy rains.

Still dry as a bone here. Last night I was watching the sky flash with distant lightning and could hear thunder, but it missed me. I see pockets of intense rain on radar now, mostly at the shore.

Just returned from lunch. About three miles from my home it had obviously rained pretty hard and there were large puddles. These storms are really localized. Right now radar shows they have moved completely out of NJ.

Had some Storms This morning. No hail ,but we did get
heavy rain with thunder and lighting.We needed the rain

Same here, but if you look at the ground now, you'd never knew it rained.

It came roaring through here also. It should help a little - stream levels have been getting low. But I don't think this storm amounted to a lot of water, rain gauge only said 1/10" although that reading could be a little low. I still see some scattered pockets of rain on the radar so maybe we'll get a little more.

Had the storm this am.

It's a bit warm on the deck right now

Well at least there's a breeze today - I am heading out into the woods for a bit now. Went out yesterday evening around 7:00 and it was dead calm. I could handle the heat, but the flies were really aggressive so I cut my walk short.

Looks like no immediate end in sight for temperatures in the 90's...

Thunderstorms galore around 1230 am.Most lighting I have seen in sometime

We got really nailed here, trees are down everywhere power is out. Atlantic City Electric's website is down so I can't even check the status. Neighbor stopped by and said the power was out all the way from Vineland to Mays Landing, so don't expect it to come back soon. Am running on my generator now, at least the phone/internet works.

Driveway was blocked off by several fallen trees, thanks to a little help from the neighbor I got that cleared. One of the branches snapped back in my face when I cut it and gave me a bloody nose - looks like I was in a fight.

Rain gauge shows .8 inches, I think it all fell during a 1 to 2 hour period.

A State of Emergency has been declared in Atlantic County restricting travel following strong thunderstorms overnight that left 168,000 Atlantic City Electric customers in the dark.

According to Atlantic City Electric’s outage map there are 162,000 customers without power as of 10AM. Their website came up as not being found during an attempt to get an update at 10:45AM.

“Travel is restricted on Atlantic County roads to allow Emergency officials to assess damage from the overnight storm and to respond accordingly,” according to a statement on the Atlantic County Public Safety website. “There are numerous power outages and downed trees and wires. Residents with damage should contact their local Office of Emergency Management. Power outages should be reported to the utility company.

We just had the light show here early morning, with a little rain. The cat was going nuts about 15 minutes before it hit. The storms had been forecasted thru the weekend.

It was a Super Derecho. What's a derecho?

Yeah, I just now checked myself. This is what I got for my local area. Could be a long wait. Glad the genny is humming along. I had to tear it down and replace the magneto coil before I could get it running this morning. Was having problems with that before after the mice built a nest inside, so I had ordered the parts last year but never put them in. 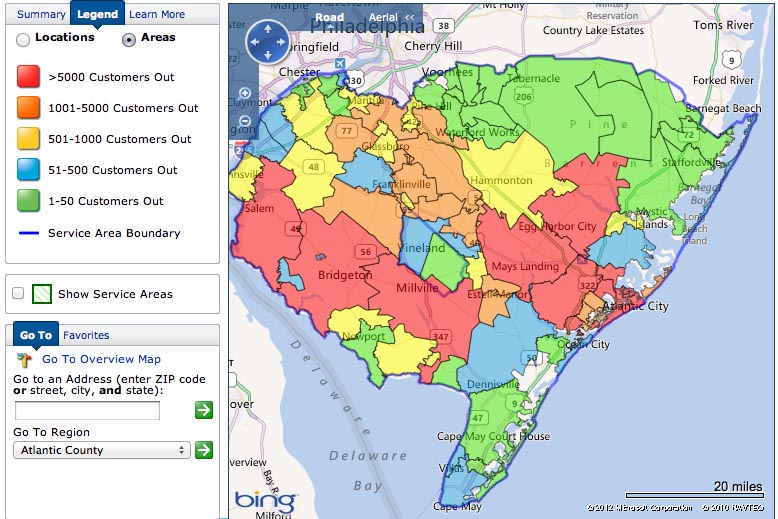 By: Dan Alexander | 33 minutes ago

The storms, which featured heavy rain, lightning and strong winds that gusted as high as 60 mph, knocked down numerous trees and power lines throughout the region.

Governor Chris Christie will hold a press conference at 3:30 PM at the Atlantic County Office of Emergency Management in Egg Harbor Township to talk about the damage.

In a statement on their website, the utility anticipates that full restoration of power could take “several days” as crews work to assess storm damage but they will work “round the clock” until all customers are restored.

“Atlantic City Electric will work to restore power by targeting critical electric facilities- such as substations and large power lines serving the largest number of customers¬-and critical facilities, such as hospitals, fire stations, water filtration plants and police stations.” They also urge people to stay away from downed power lines and utility poles.

The County declared a state of emergency at 6AM Saturday morning. “Travel is restricted on Atlantic County roads to allow Emergency officials to assess damage from the overnight storm and to respond accordingly,” according to a statement on the Atlantic County Public Safety website. “There are numerous power outages and downed trees and wires. Residents with damage should contact their local Office of Emergency Management. Power outages should be reported to the utility company by calling 1-800-833-7476.

Six branches of the Atlantic County Library system are open for relief from the heat in Brigantine, Egg Harbor City, Galloway, Hammonton, Pleasantville, and Ventnor.

Despite the problems in Atlantic County, people are still heading to the beach for relief from the heat according to the Press of Atlantic City which reports “lengthy delays” on the Garden State Parkway and Atlantic City Expressway.

New Jersey Transit tweets that bus service in Atlantic and Cape May counties could be delayed due to blocked street. The Atlantic City train line is subject to delays of up to 6o minutes.

I was right in the sweet spot of this storm in Linwood. It was the strongest winds I've ever seen and was a bit scary. Trees were uprooted everywhere and one almost took out our cars in the driveway. Atlantic county is a total mess and the Hamilton area and throughout much of Atlantic county all the gas stations are closed and all businesses. There was about 50 cars waiting for gas at the Valero on 322 and they were afraid they were going to run out. Lots of abandon cars that couldn't get to the gas stations too. The crazy thing was seeing the pole vault mat lifted up onto the fence at Mainland high school. This seemed more intense than the Irene, trees down everywhere.

Just got back from a short drive. Wow, it is no exaggeration to call Atlantic County a disaster area. I thought I could fill my gas cans at the Lukoil in Mays Landing (silly me). Came up Rt 50 then took US 40 West and didn't see a single business that was open or any signs of electric power. Traffic lights were all off. The County Park was closed.

You are right, this is a much bigger mess than Irene. Since they weren't letting cars go South on Rt 50 (the way I came) I thought I could make a loop using back roads. That was not easy, many roads are not passable. Trees are snapped off everywhere lots of power lines on the ground. I saw one caravan of Atlantic Electric trucks working their way down Rt 552 (Millville Rd) which was closed.

Here are a few pictures. Imagine scenes like this every few hundred yards down many of the roads and you will get an idea of the scope. I will probably wait until Monday before venturing out again, should have enough fuel until then. I wouldn't be surprised if the power was off for a number of days around here. 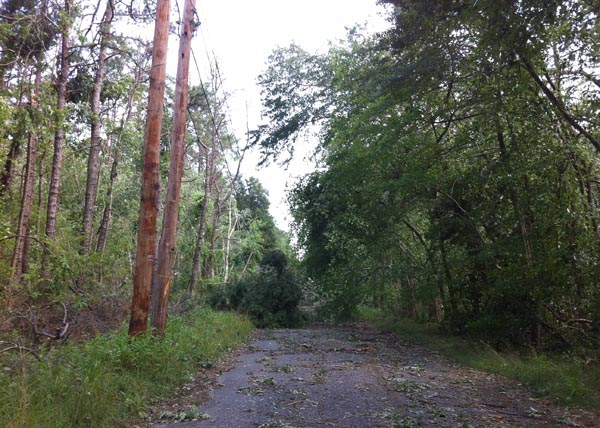 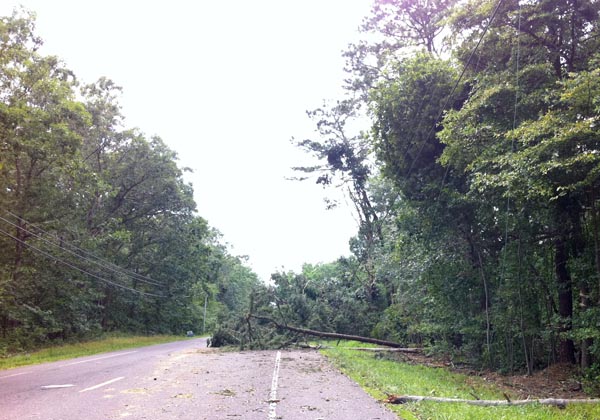 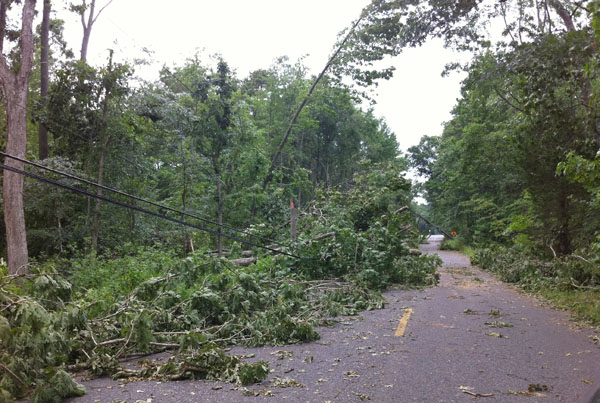 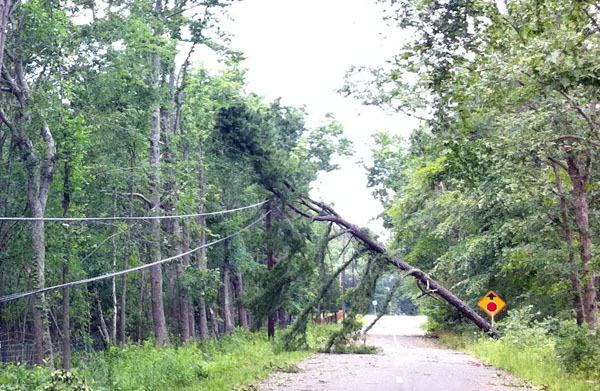 For about 20 minutes in the middle of the night it was the strongest winds I've seen and the damage was so widespread...truely impressive storm system. Couple things were striking to me. One there was very little personnel out directing traffic/assessing or cleaning up, its seems as if they were totally caught by suprise. Usually I'll see 4 cops pulling over someone who didn't stop at a stop sign, today I saw ZERO cops. Two, people were in a state of total panic, because the lights were out people were trying to navigate areas without the aid of lights and it was totally reckless. Just up from Weymouth Furnace at that intersection people where almost getting t boned left and right. It seems that eventhough the shore had no power and everything was closed that the desire was overwhelming to still be down the shore. I was down last night and at 630 went to the pines and had to go back to Linwood to put water out for the cat. After 2 hours of trying to figure out a way there, I turned around and went home, seemed everyone figured out how to use their smartphone to find backroads. I truely have no idea why people were still trying to get down the shore. At the one gas station a couple asked me if it was always this crowded on saturdays, my response was 'yes, this is about normal'...apparently they don't listen to the news at all.

A pretty crazy sight to see is the Atlantic Blueberry entrance on 322, probably every other trees is uprooted and they are some big pines there.

dragoncjo said:
Couple things were striking to me. One there was very little personnel out directing traffic/assessing or cleaning up, its seems as if they were totally caught by suprise. Usually I'll see 4 cops pulling over someone who didn't stop at a stop sign, today I saw ZERO cops.
Click to expand...

That was still the case when I went out an hour ago. I didn't see a single cop on a half hour drive. The intersection at the Lukoil/McDonalds in Mays Landing was a nightmare to get through. There was one road crew clearing fallen trees on Rt 50 at Rt 669, and there was also the ACE caravan I mentioned above on Rt 552. But that was it. And things generally looked like a ghost town everywhere. I don't know if people are just inside their homes of if they went away.

I wonder if they're having problems getting emergency crews due to the big extended holiday weekend? I would have expected to see more activity. But I'm sure there are people working somewhere, risking their lives and giving up time they had planned to spend with their families.
You must log in or register to reply here.
Share:
Facebook Twitter Reddit Pinterest Tumblr Email Link
Top Bottom