That's pretty cool Boyd, shows every little dip and furrow. Could you not just load them as photos overlaid with the location data? I mean, I see it pretty good on the forum, why can't they look the same in a GPS?

PS: what do the blue lines represent? Are they all sand roads?

This information is excellent for planning a hike where you haven't been. It would show you what you may be getting into.

Bob: Not a dumb question at all - this stuff is complicated.

Yes, it is very easy to make the kind of map you describe and I have posted a bunch of them for download already, such as this: http://www.gpsfiledepot.com/maps/view/271/

The technical name for this is "raster imagery" and Garmin calls them "custom maps". In fact, they are .kmz files that use the format developed by Google. You can also use them in Google Earth. The problem is, Garmin has only implemented this feature on their newest units, so anyone with an older model (such as the very popular 60csx) wouldn't be able to use it. And another problem with Garmin's implementation is that you can only make relatively small maps in this format. Using the full resolution LIDAR data, the largest map I could make in that format would be about 6 miles x 6 miles, but I want to cover the whole pine barrens.

Yes, the blue lines are little roads. I have been experimenting with different colors to see what will stand out against the shaded background. This needs more work, but that's the easy part. First I need to figure out a way to get the LIDAR data to work properly on the GPS. I am undecided as to what other features I should overlay on it (such as streams and lakes). The LIDAR is very high resolution and there isn't any hydro data that accurate, so it looks kind of crude when I overlay it.

Have tried a lot of different things, and am making some progress, but it's clear that Mapsource will always do a much better job at rendering than the GPS. I think the next step is to use color to provide a better visual cue as to elevation, like some of the screenshots from Globalmapper that I posted on page one of this thread.

BTW, Mapsource does a much better rendering these images on the computer than Basecamp does - kind of surprising. Of course, I'm breaking all of Garmin's rules with this kind of map so I can't really fault their software.

You know, I wasn't even going to bother, but for the heck of it I thought I'd try this map on my Nuvi 3790. Wow... the rendering is virually identical to mapsource. Even better in fact, because this device contains data to enhance the shaded terrain.

But the really fun part is the 3d view capability.

Well I now have it working - in color - about the same in Mapsource and a variety of GPS devices. It is "blockier" looking that I had hoped, but it doesn't seem to work correctly unless I keep the resolution pretty low. It even works on the 60csx, but I don't know how useful it will be - this map really needs a high resolution screen. Am going to kick this around a bit more, then will make it available for download.... 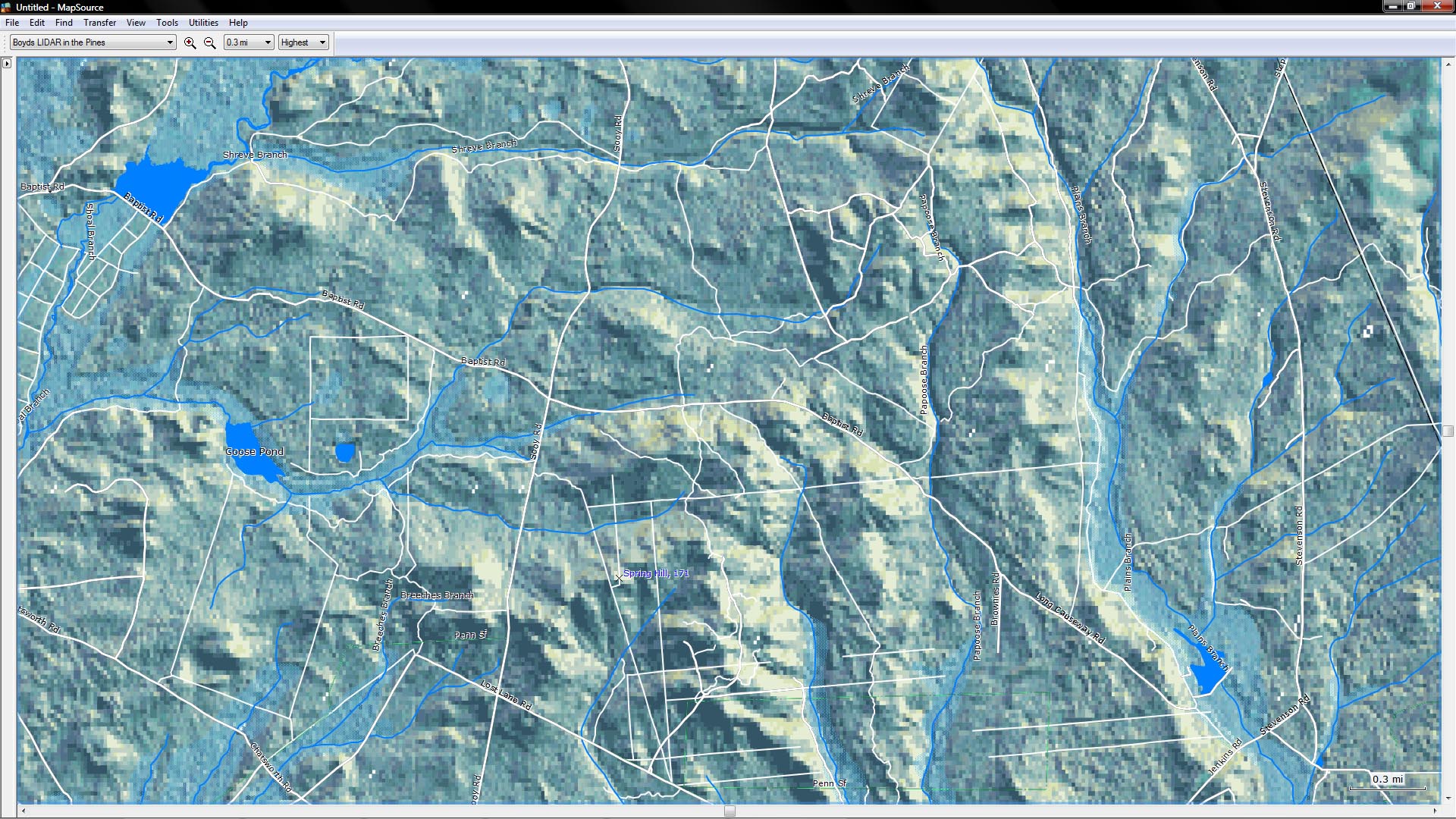 It's looking nice. If I didn't know better I would think it was in the alps

Thanks Guy! I have decided to go in a little different direction. Although these screenshots look nice, it just doesn't look good on the GPS where the colors aren't as saturated and the contrast isn't as great. So I am now using "atlas shading" and getting results that I like better. Have also done a lot of work "under the hood" to make the files smaller and more responsive. 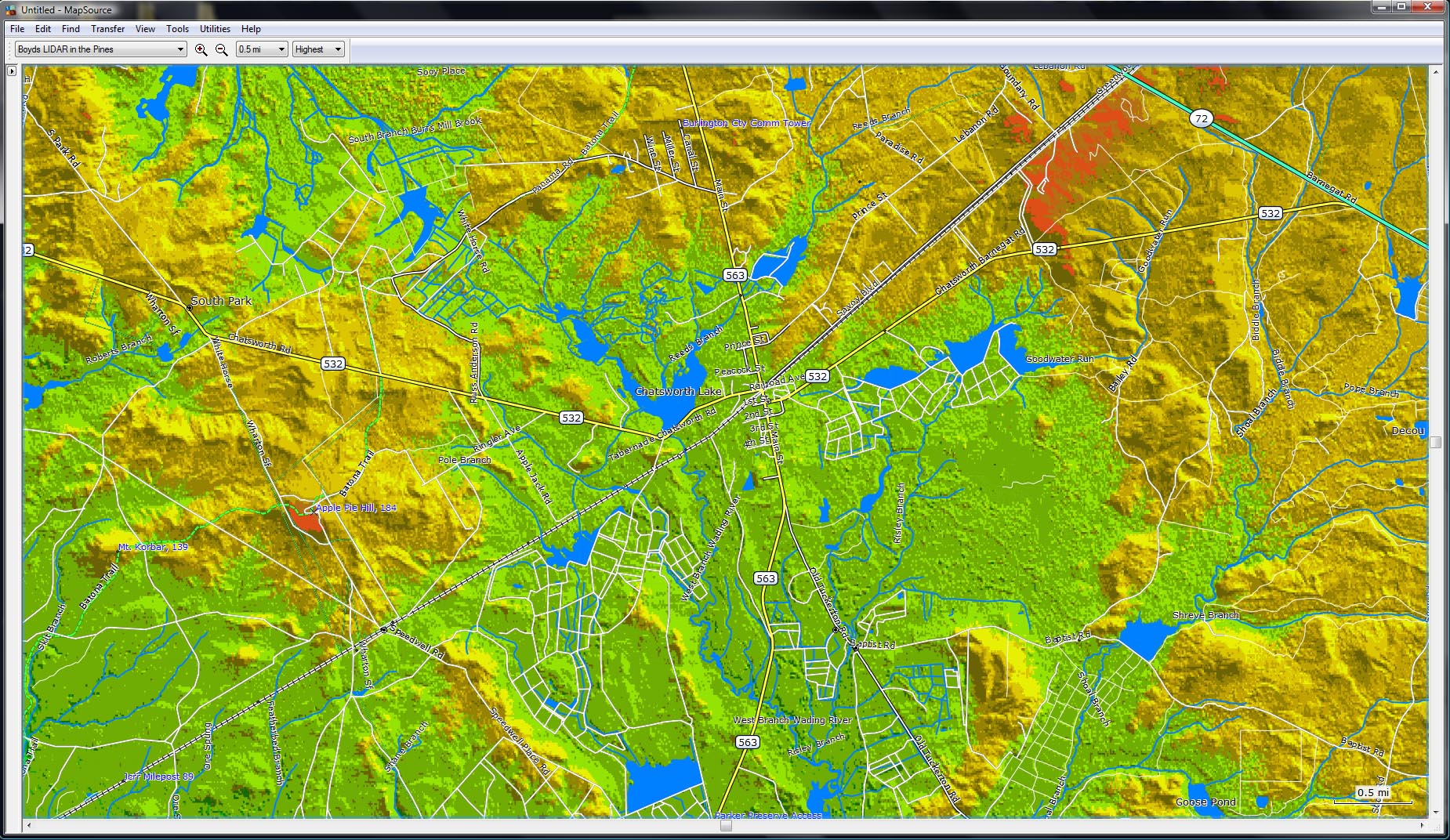 One advantage of this approach is that you can easily estimate elevation, based on the following scale.

I have been spending a LOT of time on this, and have even thrown everything away to start over from scratch a number of times. Finally starting to get results I like, so it won't be too much longer before you can download a copy yourself. Here are a few screenshots from my Montana. It should be compatible with any Garmin GPS, will be testing it on the 60csx soon. Of course, newer models have bigger screens and faster processors which are both desirable for this kind of map.

I have decided to release it as Boyd's Map of the Pines LE, where LE stands for LIDAR Edition.

And here's a big picture from Mapsource. 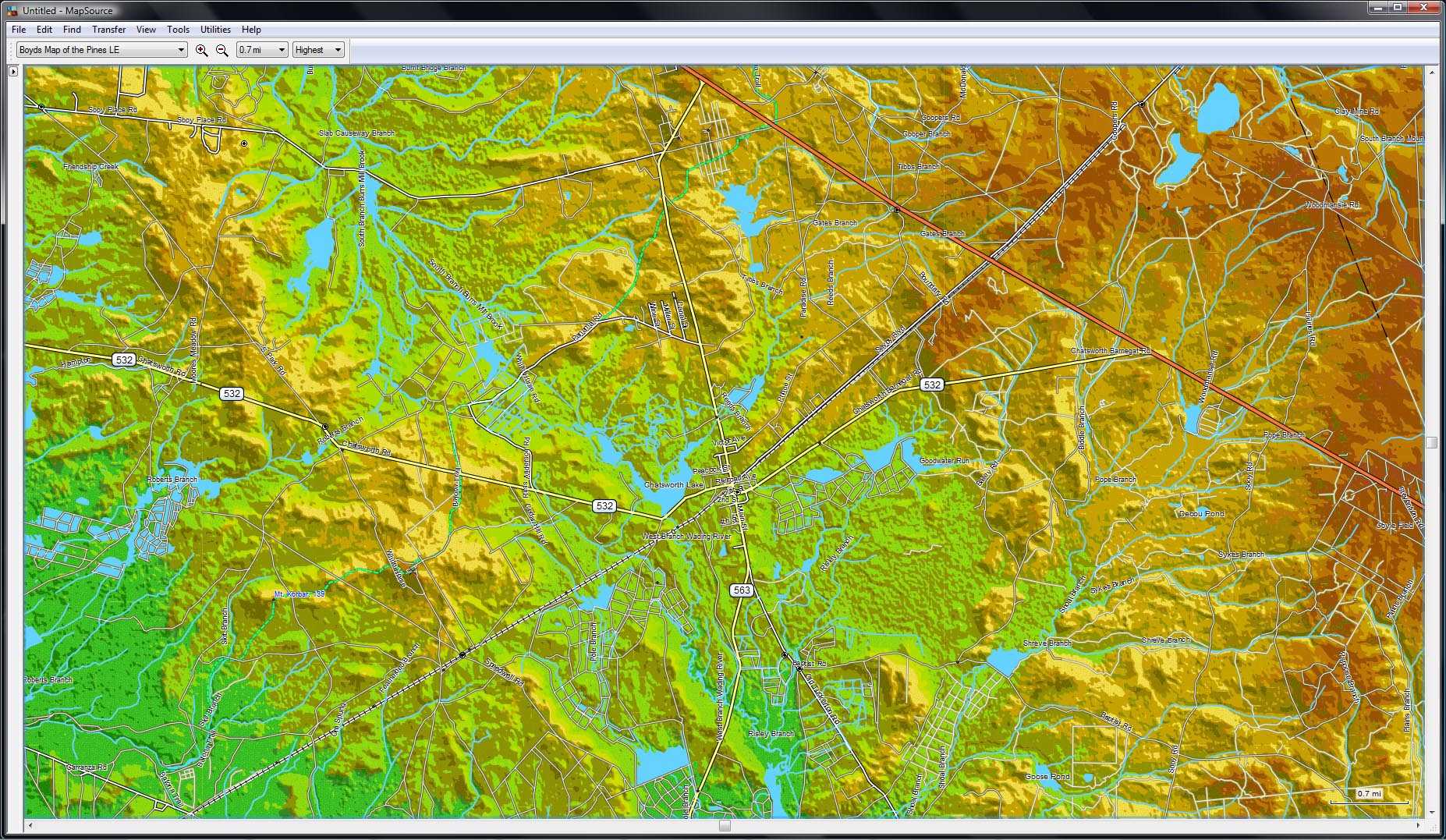 Lots of hours have gone into this since my last post, and I've used just about every trick I can think of. Have spent awhile developing a relational database to analyze and optimize the image. Now I like the results, but need to pause a bit an be sure that it doesn't overwhelm the GPS. I like the way it looks, but it has a pretty big impact on performance. Here are a couple before and after screenshots showing the new version.

My finished map contains 55 USGS quads and I've completed 33 of them, so it won't be too much longer before it will be available. Have further optimized the data, improved the color and reduced file size so that it seems to perform well on my Montana, even in the car. Will test on other units soon.

I have to say, this project is really helping me visualize the pines in a way I never did before - especially the watersheds. 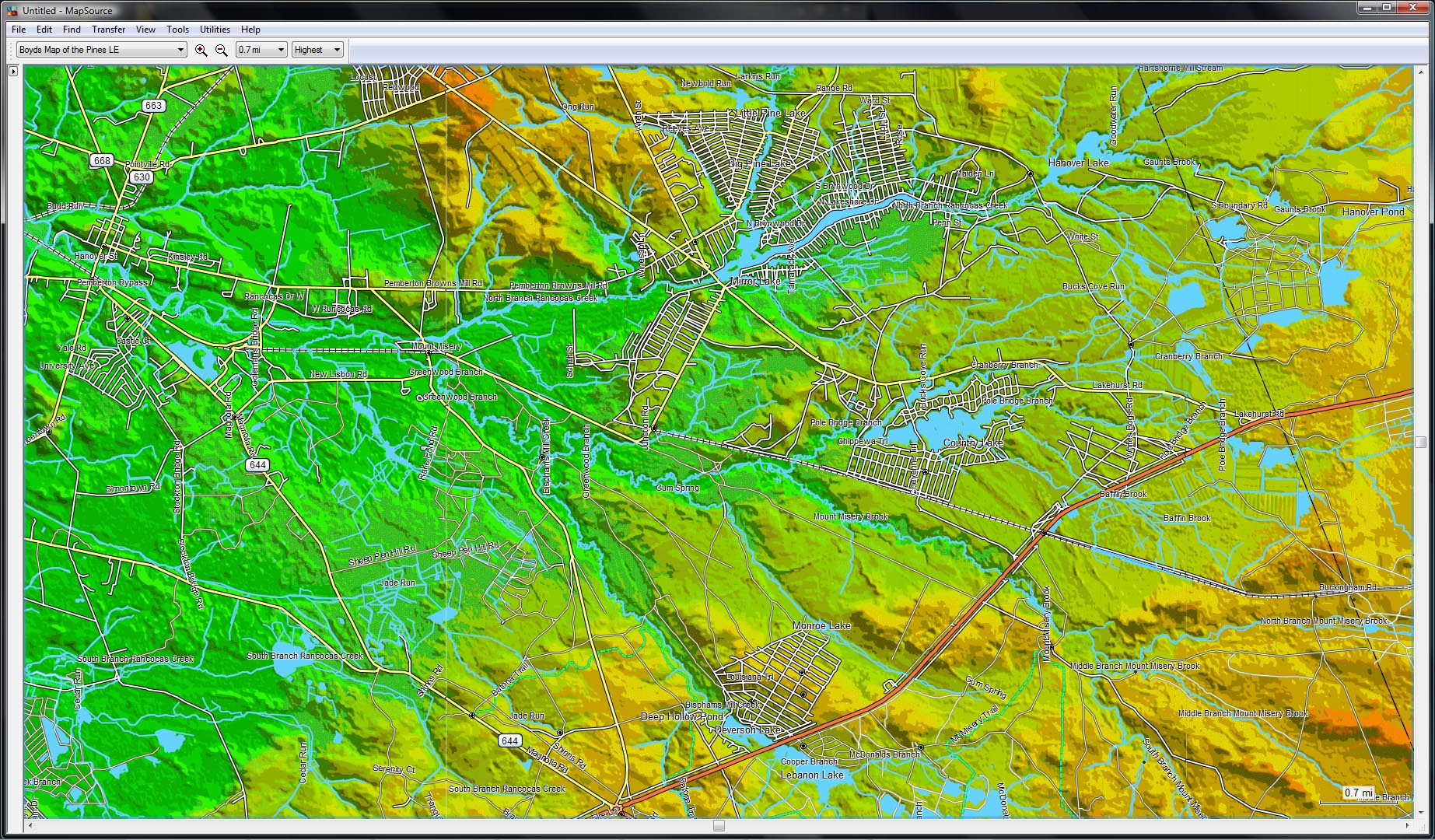 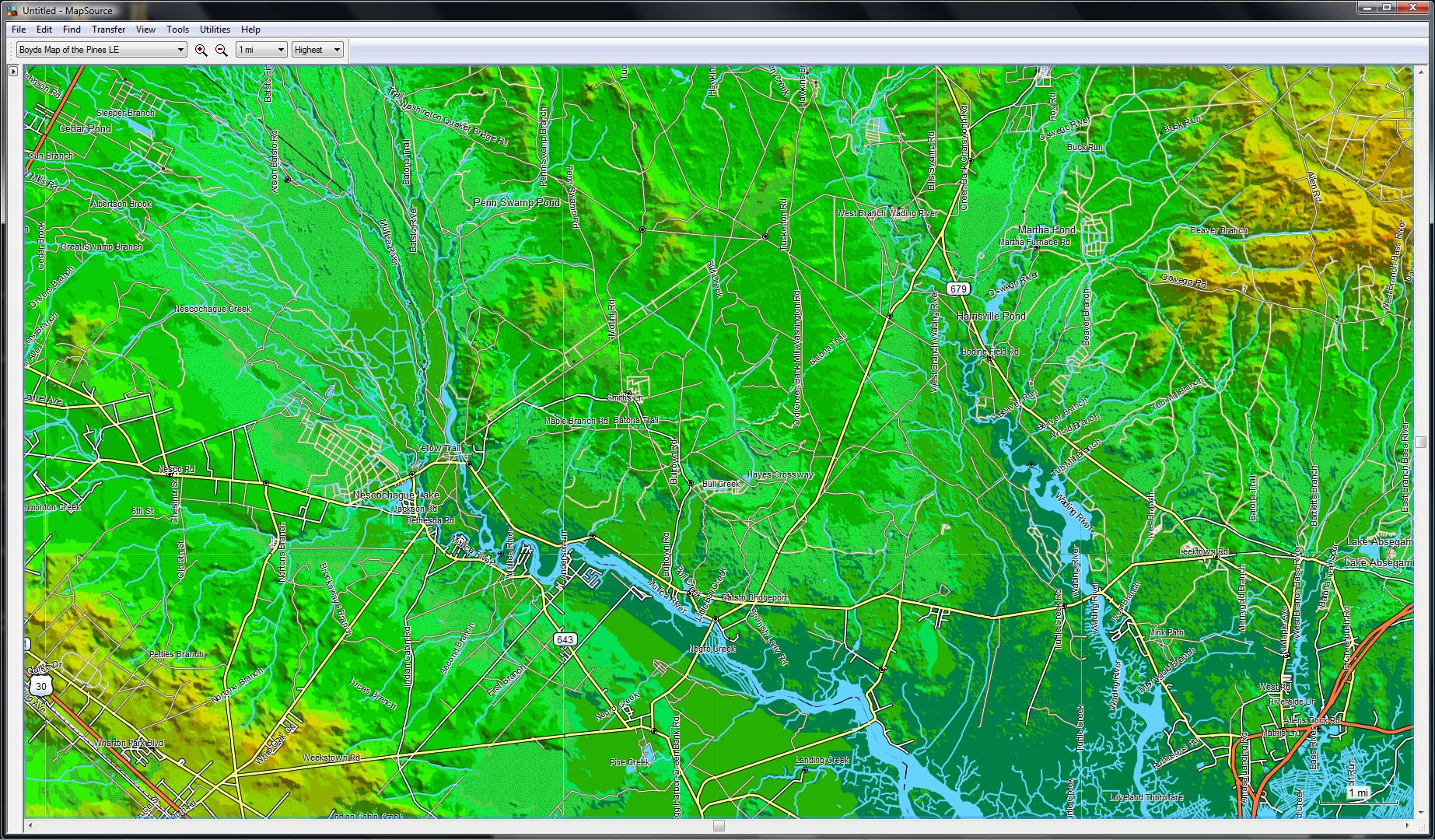 Interesting Mr. Boyd. In your last post, I see some tweaking of names is in order. New Lisbon became Mount Misery last nite? And Browns Mills Junction is now Junction Road, and Browns Mills (as a named place) is not shown.

All I have to to do is use my gps,its getting old(Garmin 76csx) Keep up the great work Boyd

Thanks Bob, I just checked those things and actually they are correct in the data. What you are seeing is a quirk of how Mapsource displays things when zoomed way out. The amount of labels are reduced since they get crowded and would clutter the screen. Mapsource has its own algorithms for what to display and where to put the labels, and it can be confusing.

The "Mount Misery" turns out to actually be Mount Misery Road but its displayed right next to the dot for New Lisbon (which isn't labeled).

This is kind of a bad compromise on Garmin's part, and there aren't any settings to change this behavior. But the software has to deal with the amount of detail that can be shown on a 72 dot per inch computer screen vs. a 1200 dot per inch printed map.

Also, you will find that this probably behaves differently on the GPS device itself. I usually see more town names on the GPS itself, and Mapsource is especially reluctant to display town names for some reason. Different software teams write the code for the PC applications and GPS devices. I might be able to improve this in the future by using a different code for the points representing towns. There are a variety to choose from and I'm not sure how or if they might be different.

Thanks also Guy and Dogg. I think this map will work on the 76csx, I have it working on my 60csx which is basically the same. It's a little slow, but it works.

I still thinks it's west virginia

See, that's the idea. The pines usually look like muddy green on a map with shaded terrain. The full range of elevations in the map I'm making only goes from sea level up to 238 feet. So I have compressed the color scheme to fit that range which makes subtle changes in elevation visible. If I was making a map of West Virginia, I'd have to stretch the same colors up to 4,000 feet (or whatever).

Went for a quick drive today, and it works well on the road - even the lowly Nuvi 205 had no problem keeping up at highway speed. The 60csx works OK, but is slow to redraw the screen, so I didn't bother testing it at high speed.

Here's a look at the Menantico, Manumuskin and Tuckahoe basins... 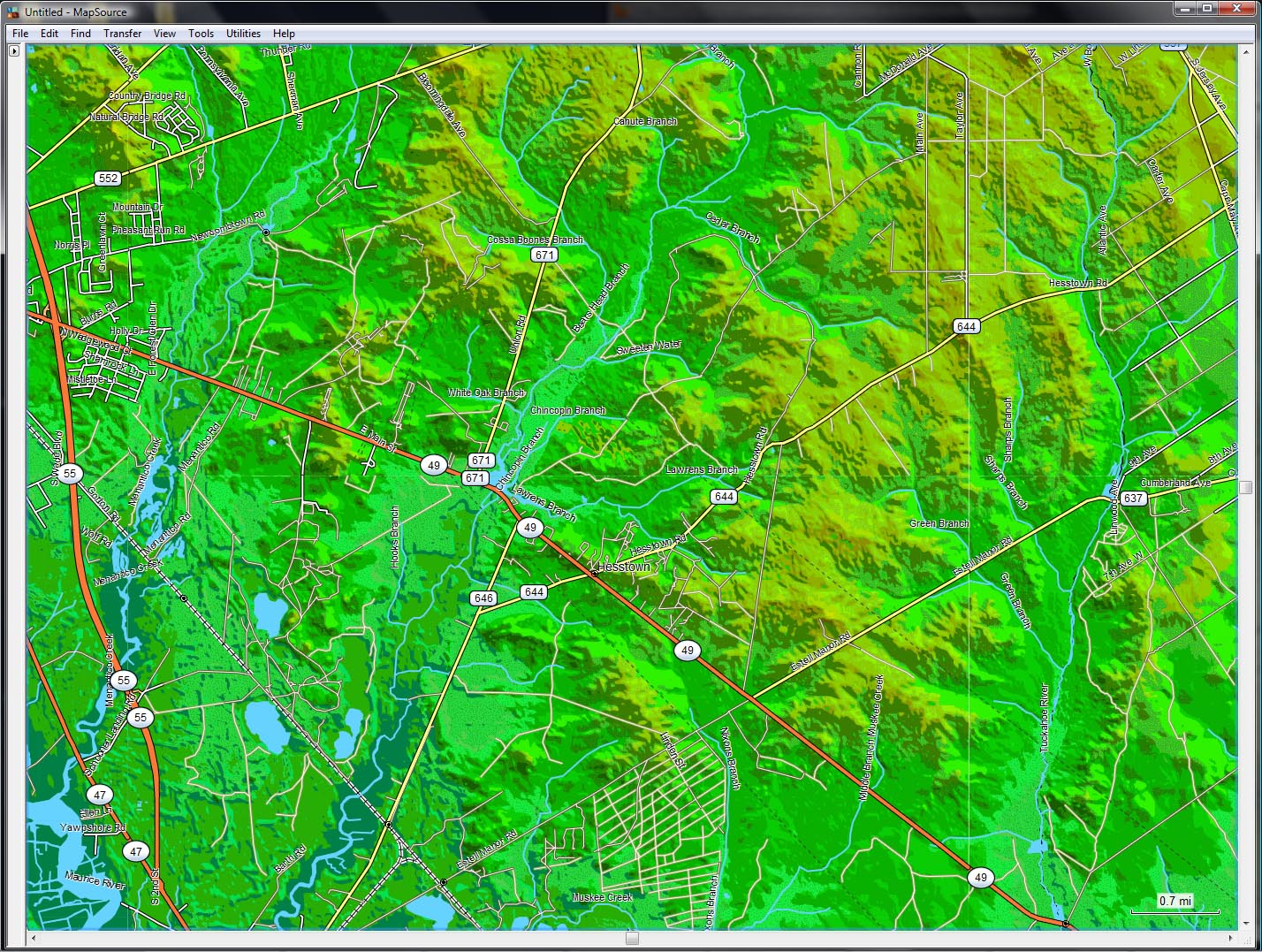