Well, it's been almost seven years since I released the old "Map of the Pines LE", which was an attempt to put LIDAR imagery into a Garmin-format map (.img file). Looks really terrible to me today!

So my next map is going to be a huge update to this old map. Now this is a Garmin format map, which means it only works in Garmin's software (Mapsource and Basecamp) and Garmin GPS devices. It is not compatible with any smartphone apps or other computer software. But the advantage is that Garmin die-hards will now have a map that installs directly into Mapsource/Basecamp and doesn't require downloading or learning any new software.

Time travelling back to 2012, this was what the old LIDAR map looked like 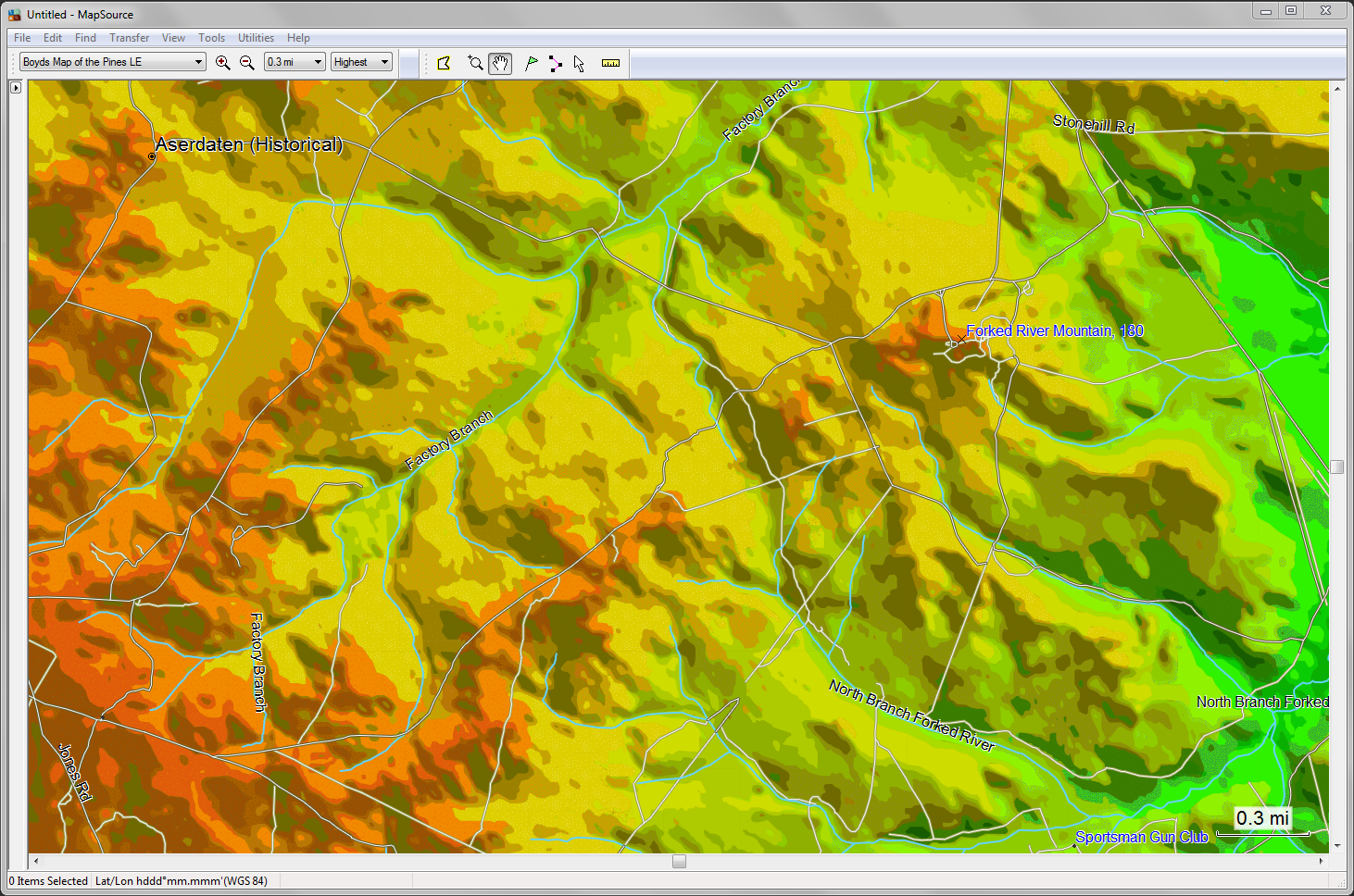 And here's the new LIDAR map of the same area 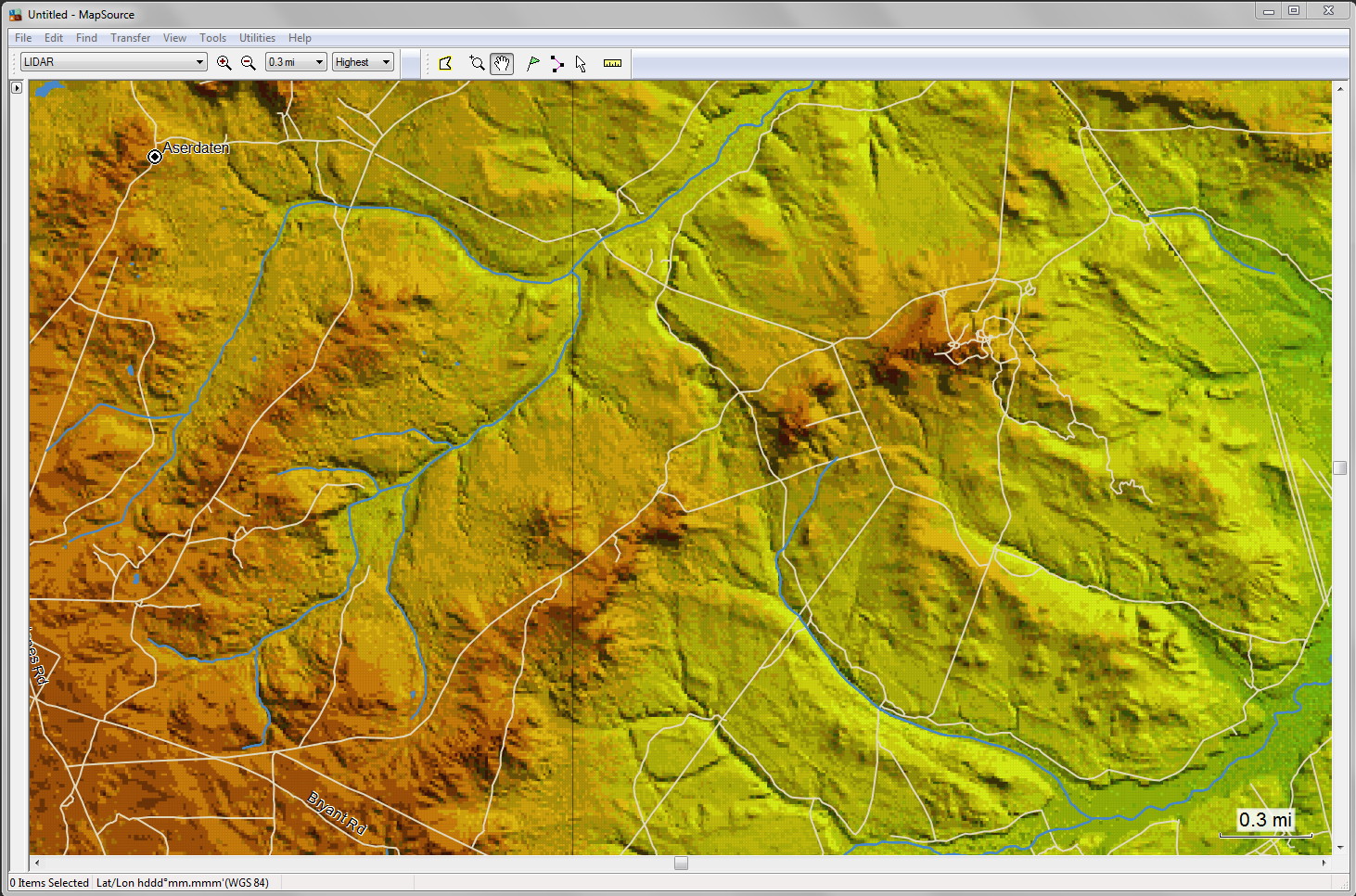 This map uses a new technique I developed where each pixel of the original imagery was converted to a 48 foot x 48 foot square in Garmin .img format. Each of these squares also has an elevation sample, so running your mouse over the map displays the elevation (notice the 88 ft elevation next to the mouse pointer below). 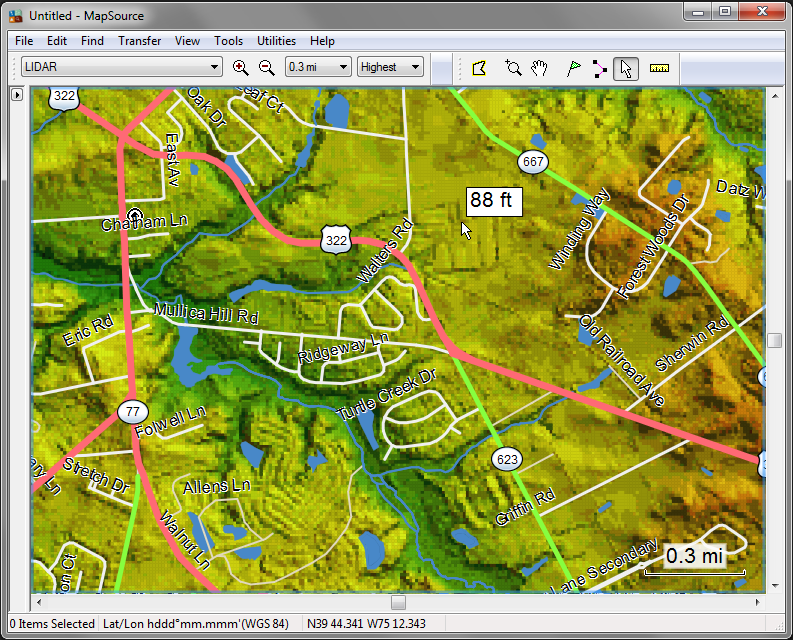 Zooming in shows the individual pixels - there are almost 70 million of them in the full map of South Jersey. 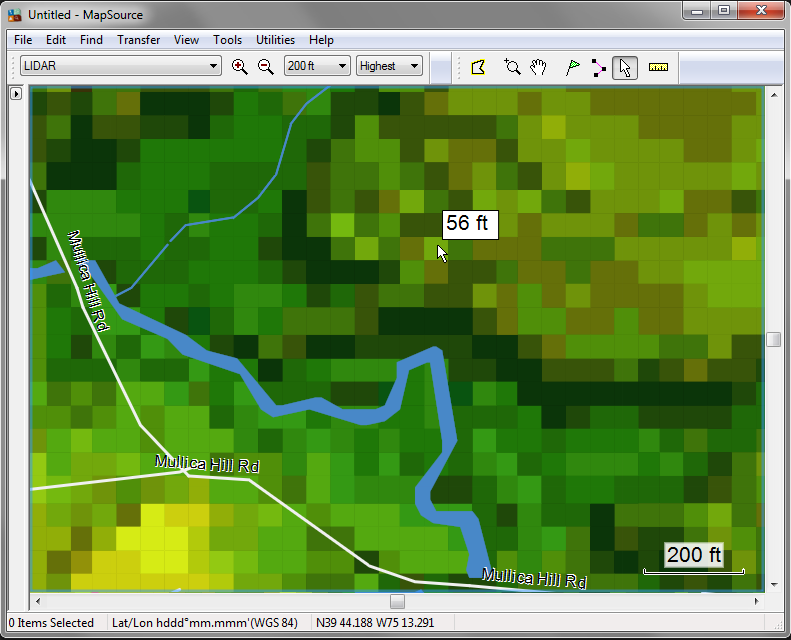 Now there are some limitations to this unfortunately. The map is technically compatible with any Garmin GPS, but it makes huge demands on the device and I would not expect it to work acceptably on anything but the very newest models. I have been using it in the car on a DriveSmart 61 and it works pretty well.

Garmin's computer software (Mapsource and Basecamp) are much more powerful, and it works very smoothly there. So that's what most people will find useful about the map - using it on the computer. My "LIDAR in the PInes HD" map will give you much more detail, but it's a huge download you'll need to install and learn Mobile Atlas Creator to use that map. This new map will make a lower resolution version of that big map available to anyone who has resisted installing my newer maps. And this will literally install with just a couple mouse clicks on either the Mac or Windows.

You can also use this map in conjuction with Birdseye imagery in Basecamp. This will allow you to see elevations on the aerials when you click the mouse. And when you create a waypoint with this map loaded, it will be named for the elevation of the cursor position (such as "88 ft").

I think I'll call the new map" LIDAR in the Pines SD". Am about 2/3 finished building it, which is a rather slow process. Am shooting to have it finished before the end of the year, and will post a download link here when it's ready. Here's a comparison of the new map (on the left) to LIDAR in the Pines HD (on the right). If you look at the full size image, the difference is pretty obvious, but when you zoom out a few clicks (such as the small image below), they look quite similar.

This map also includes vector based features for roads, streams and waterbodies over the imagery, which have a "cleaner" look. 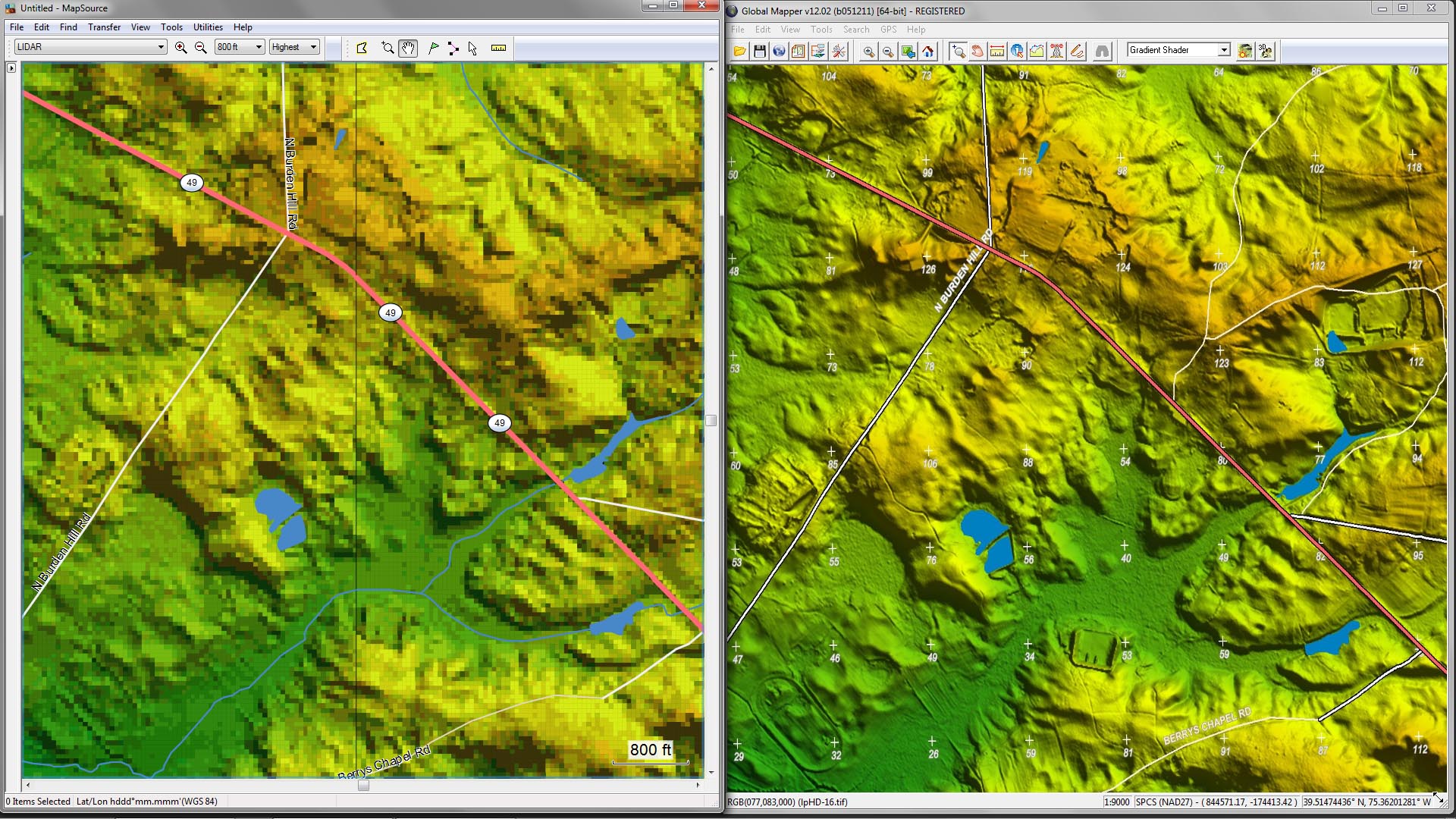 Sounds good. I use BaseCamp, so I look forward to it.
Reactions: Boyd

I think I"ll be able to find that old sheath knife that fell out of my pack in Featherbed Branch cedar swamp with this!
Reactions: Boyd, bobpbx and Menantico

Should work very well for that.... if the knife was more than 48 feet long and several feet thick.

The map is now available for download.... just in time for Christmas!

There are separate versions for Windows and the Mac with easy "one-click" installation. Download size is less than 400 MB as opposed to 15 GB for LIDAR in the Pines HD. Read the documentation and download the map here: https://boydsmaps.com/lidar-in-the-pines-sd/ 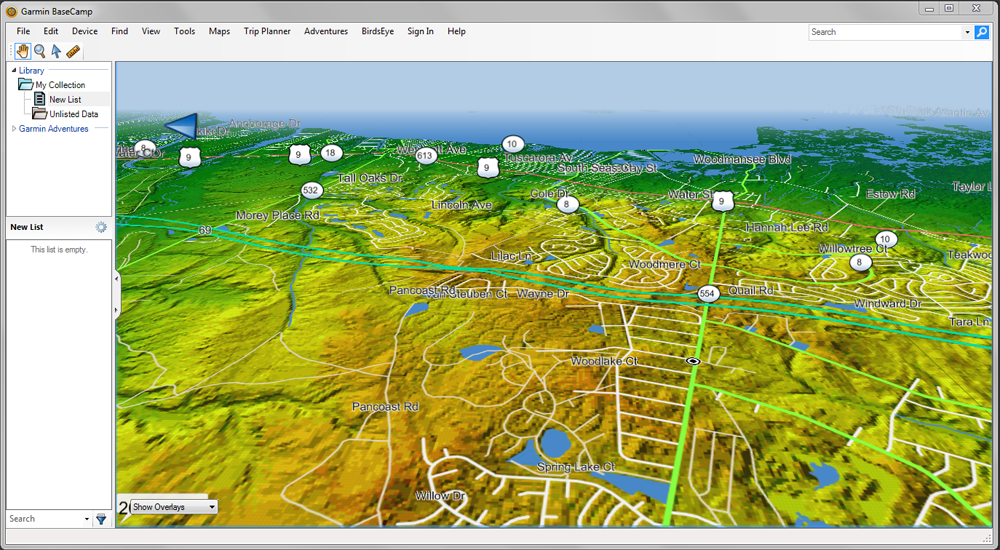 You can also use the map with Garmin BIrdsEye and you'll see the roads overlaid on the imagery in addition to the elevation at the mouse pointer. 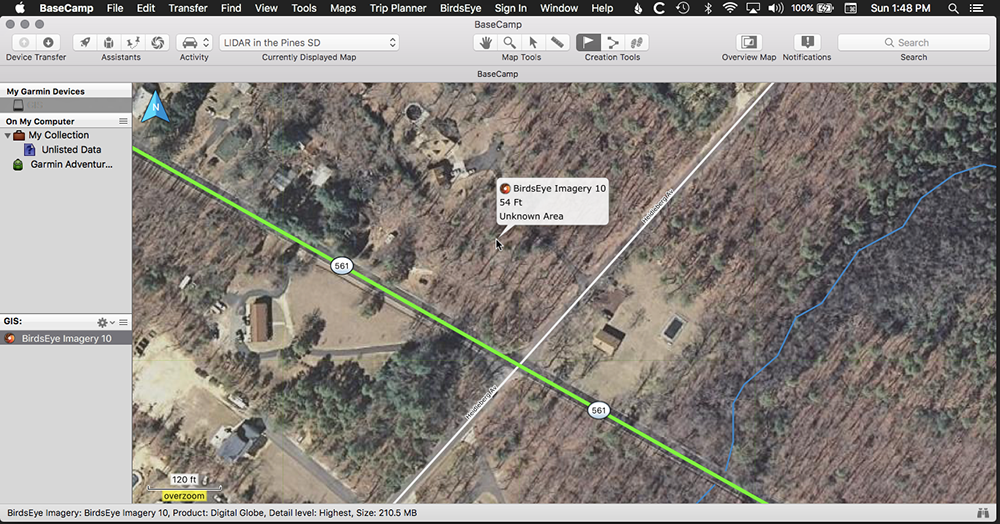 Here it is on a Garmin DriveSmart 61 GPS. 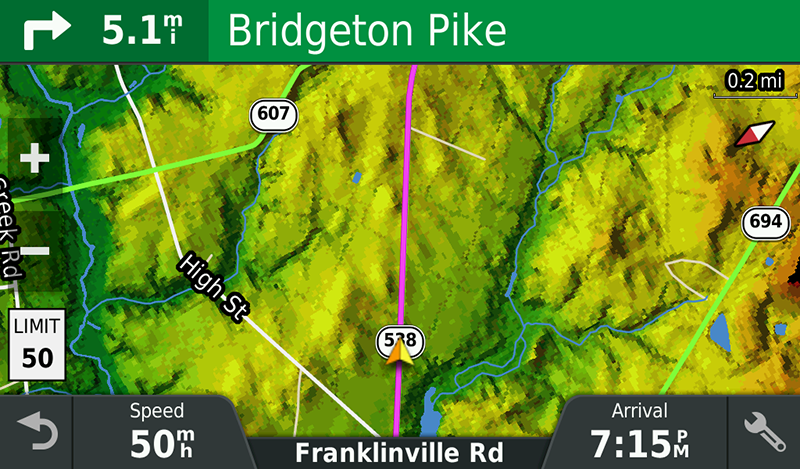 It can even warn you when a deer is about to cross the road! 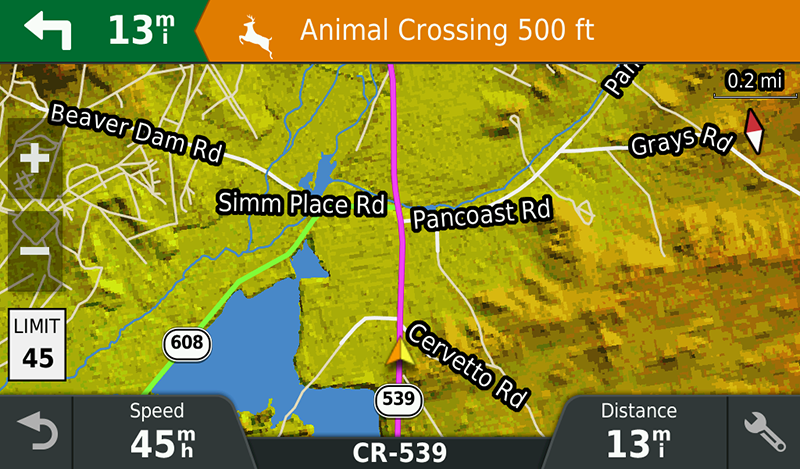 OK... it can't really do that. These alerts come from data embedded in Garmin's City Navigator map. Where do you suppose that data comes from? Is there actually a "deer crossing" sign on the road at this location? The new Garmin automotive units are constantly warning you about things like railroad tracks, schools, speed zones... curves in the road. But the tracks are often out of service, or the schools are closed. Unfortunately, you cannot disable these alerts.

Let me know if you have any problems with the map, and I hope everyone has a great Christmas!
Reactions: Menantico, 46er, Jon Holcombe and 1 other person

The Map Master does it again!!! Thank you and Merry Christmas.

Amazing work Boyd ! Merry Christmas !
I think I am going to hang a few stands at those deer crossing locations.