I am pretty much finished with the pines quads, but am extending coverage to the South and West since that area also interests me. I wasn't happy with the lack of detail in the lowest elevations, so I had to re-process just about everything yet again.

Here's another view of Al's back yard

There's a clearly defined "shelf" visible here, bounded by the railroad tracks to the South and Rt 553 to the West. Is this where the ancient coastline was located?

I've noticed that the tracks kind of borders a shelf too, know all of southe jersey was coastlands at different places in the past but that does look like a good bet for one that lasted awhile

Al wore down the hills tromping around that area!

It's even more dramatic in the source data. Use this scale as a reference for elevation. It just seems odd to see such a straight line there. Could this be the work of man? 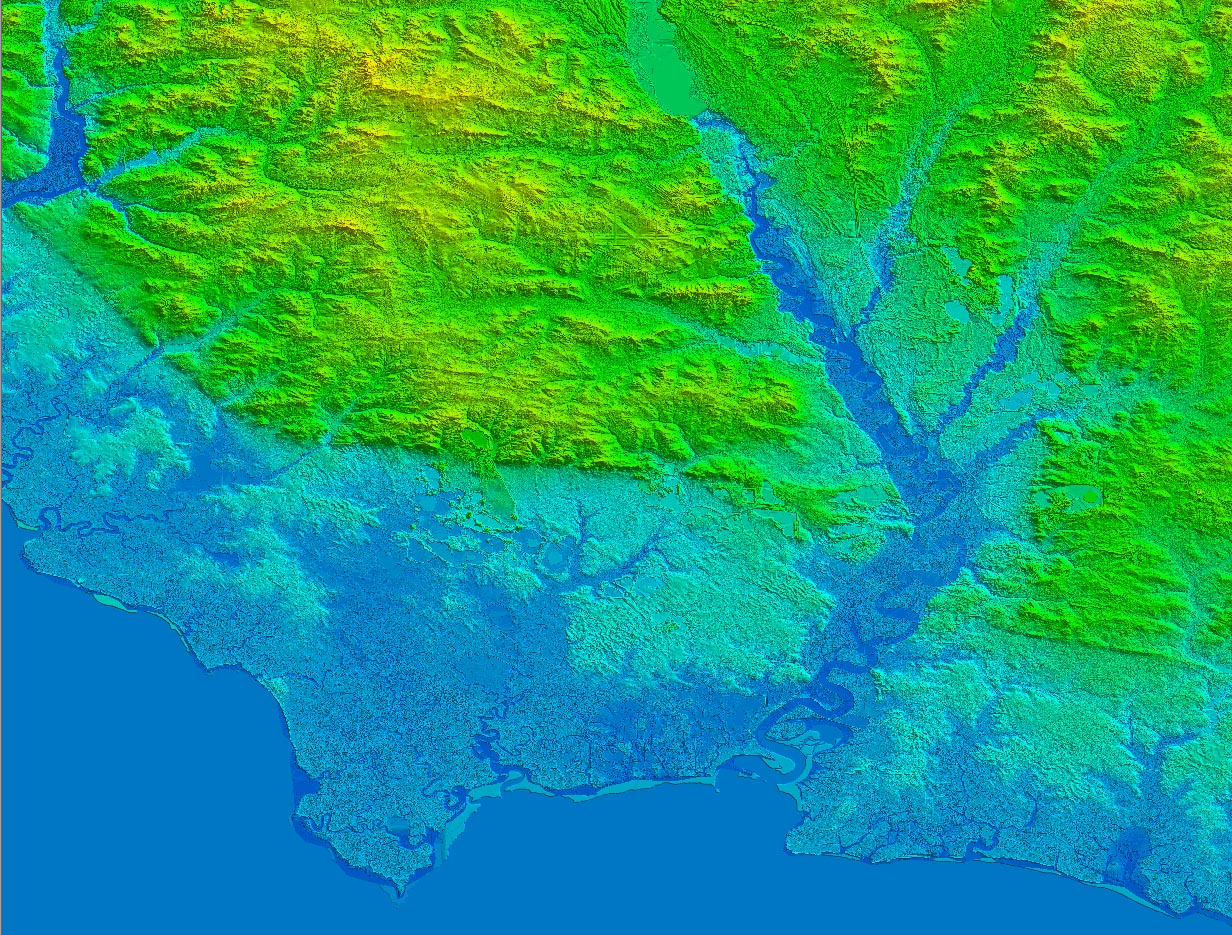 And a similar sort of "shelf" to the East. Belleplain State Forest sits at a much lower elevation than Wharton or Lebanon. This is sort of the "basement of New Jersey". 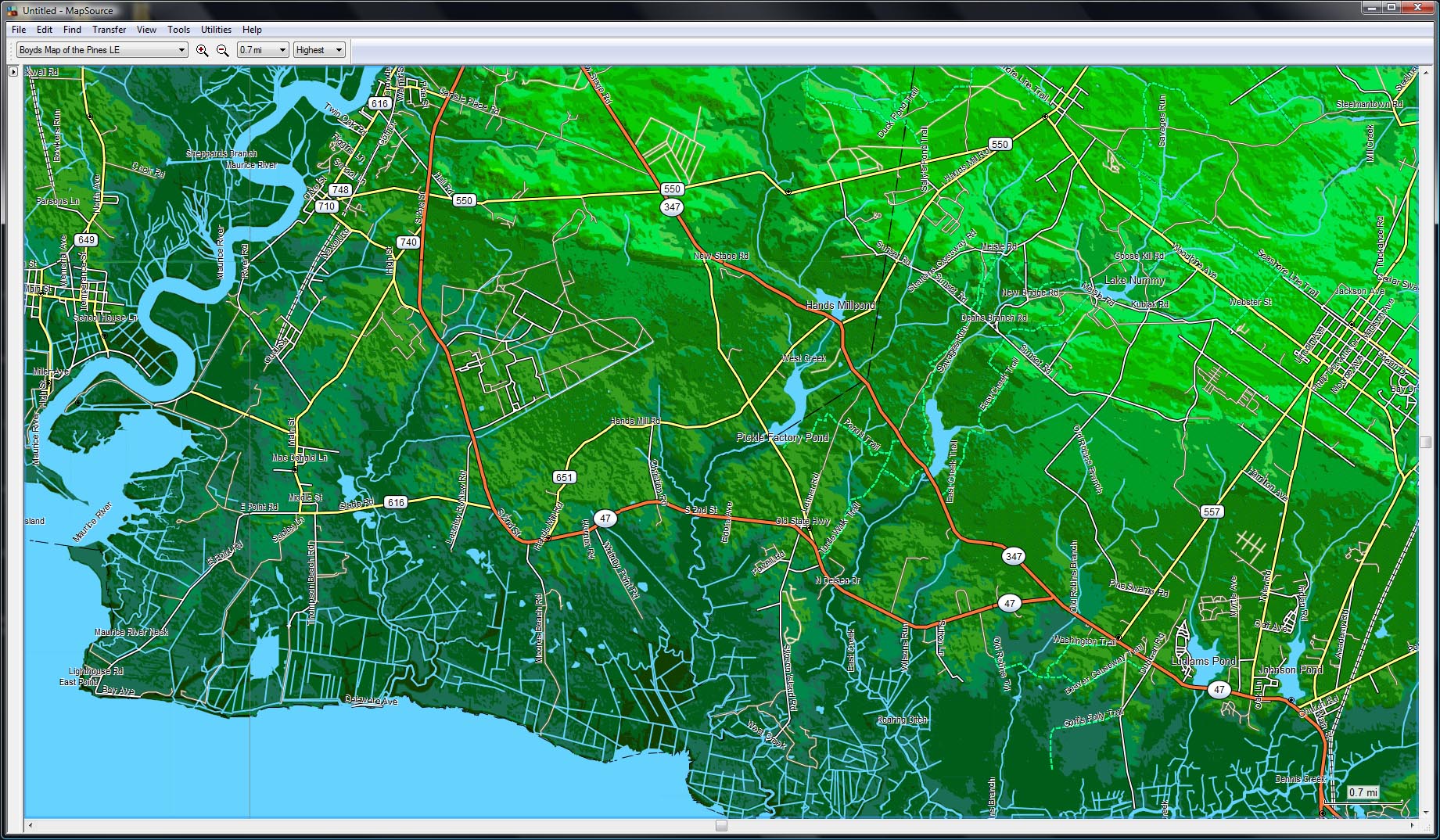 This map is now available for download as a universal version that works on both Mac's and PC's: http://www.gpsfiledepot.com/maps/view/276

With Basecamp can I view this map on my computer? Can I take snapshot jpegs of this map and make smaller section maps with Triton rmp to put on a triton? I have mapsource cd here from when I had my first gps which was a garmin,do you consider Basecamp or mapsource better for what i want to do?

View attachment 1887[/quote]
That straight line is awesome! Definitely manmade.You don't get straight lines like that in nature. If we can figure out who built this we will have found the builders of Easter Island statues,the Giza pyramid,Petra,Machu Piccu and the giant stones of Baalbek.It all has to be tied together.

manumuskin said:
With Basecamp can I view this map on my computer? Can I take snapshot jpegs of this map and make smaller section maps with Triton rmp to put on a triton?
Click to expand...


Sure, that will work fine. For what you want to do, there won't be a lot of difference between Mapsource and Basecamp. But I would say to use Basecamp because it gives you more control over how many labels are displayed and lets you choose which objects to show. Be sure that you set map detail to "most" using View > Toolbars > Detail Level and also choose the highest rendering quality in the preferences.

Haha, I was thinking the same kinds of things when I saw that line for the first time.

Boyd said:
It's even more dramatic in the source data. Use this scale as a reference for elevation. It just seems odd to see such a straight line there. Could this be the work of man?
Click to expand...

I thought it might be a shore line but that is very very straight.You don't see many shorelines that straight.Extra Terrestrial Engineers may not be correct but I don't think Sasquatch knows how to throw a line that straight.

I downloaded basecamp and installed it.worked fine.downloaded Boyds map and extracted files into documents which is only option it gave me.Then tried to use installer and it kept telling me there was no Boyds map is users/app/data somethinb or other.In other words my computer is insisting the file be located in a place that i can't find so I cannot place the file there which is obviously where it need to be.Ahh! The joys of Vista!.I've been this route before.I'm not argueing with it.I uninstalled both the map and basecamp.I thought I was dealing with Magellan again.Bad flashbacks.

Hey Boyd and everyone,
I downloaded Boyd's pines Le and it looks spectacular on Base Camp. I downloaded it to built in memory on my Oregon and it looks fine but it erased my Boyd's 2012, even though Base Camp said I had 300+ MB left. So I reloaded Boyd's 1012, and everything is fine. Then I loaded Boyd's Pines LE on my SD card and now I have both. Who knows, but life is good. My Sd card is an Amazon Essentials class 10, 16 MB card. Boyd, I notice no slow startup on my Oregon.
This map is amazing, especially when zoomed out. I know the contrast is way up but the topography has my imagination in overdrive. I was half blind before. I have lots of geology questions.
A hearty thank you,
Ed

Hey - glad you like it; my hope was that it would open peoples' eyes to things that they never realized were there.... it certainly has for me.

Regarding the disappearing map, that's the way Garmin software works, in order to be compatible with old devices that would only recognize one map file. This fix is very easy. Send the first map, then while the GPS is still connected, open the Garmin folder on it and find the file named gmapsupp.img. You can check the modification date/time if you want to confirm it is in fact the map you just sent. Change this file name to something more descriptive, like PinesLE.img or whatever. Just be sure you keep the .img file extension.

Now send the next map, which will also appear as gmapsupp.img and repeat, changing the name to NJ2012.img, or anything you like. You can repeat as often as needed to add more maps to internal memory.

I think you will find that the Pine LE map performs better (while moving/zooming/dragging) when installed in internal memory, but have not tested that myself. It shouldn't have much effect on startup time since the file isn't too big. If you try it both ways, would be interested to know if you can see a difference.

You will notice that the elevation read-out isn't very accurate, but I have a new highly accurate system coming in the next update. And I'm looking at space shuttle radar imagery as a replacement for the low resolution DEM on this version outside the LIDAR area. It looks a lot more like LIDAR - am working out the best way to process this data right now.

I have been kicking around with the idea of trying to update NJPB Live Maps to the Google Maps API v3 or the Bing Maps API. Throwing in the LIDAR maps once I have WMS working in the new API should be a piece of cake.

Cool Ben. The maps at http://boydsmaps.com are my own custom-rendered tiles that are hosted on the site; they aren't available anywhere else. I would be happy for you to add them to the NJPB Live Maps, but we will need to figure out how to do that. I am not running a WMS server, but I think it's just a matter of providing the data on how the tiles are stored so you can access them.

Since the whole project is still "work in progress", there will be changes to the storage scheme from time to time. You can look at the getTileUrl() and getNormalizedCoord() functions in the page source at boydsmaps.com and see how it works now. I have really just concentrated on getting the barebones site up and running so far.

When you get ready to make this work, let me know and we'll figure out how to do it.

That is nice of you Boyd!

Did Sangamonian sea levels reach beyond the edges of the Illinoian Delaware River valley in the proximity of Delaware Bay?