That was a link to (evidently) a Samsung file sharing site and from a quick search, it looks like Google has removed the Samsung app from their Play Store. I'm confused, did you post that image there? I have removed the link from your post, sorry but I wouldn't want NJPB to be a vector in spreading malware.

It may be that other people have posted malware on that same site, or if there are ads then some of them might be malicious and it's just "luck of the draw" whether one is showing when you go there.

It was just a link to the Huber Preserve
Reactions: Boyd

[edit] OK, I see that it is a samsung "link sharing site" that created the strange URL. It definitely was not a link to the Huber Preserve website, it was a link to an image that showed a map. Anyway, it's all good, but I would like to discourage people from using this kind of service. The links obscure what is behind them, and you have to click the link to find out. At that point, if it's something harmful, it could be too late.
Last edited: Feb 7, 2021

Don't know. I have learned to ignore them.
Reactions: Boyd

Six cases of gunshot shells in the building exploded before firemen from five companies could remove them.

Sparks from a chimney are believed to have ignited the roof.
Click to expand...

That club is still going strong; it is a trap shooting club. There a lot of their members in our club. We have a lot of Pinebelt members too.

I noticed that preserve when I made my new map and wondered what was there. The full name is the "Michael Huber Prairie Warbler Preserve" and it's pretty large. Are there Prairie Warblers in the Pines, or is that a reference to something else?

According to the data in the openspace file, there are 1275 acres in 7 parcels which were preserved in 1970.
Last edited: Feb 7, 2021
Reactions: Longleaf Piney

I was also suprised by that. Here's the data from the largest parcel 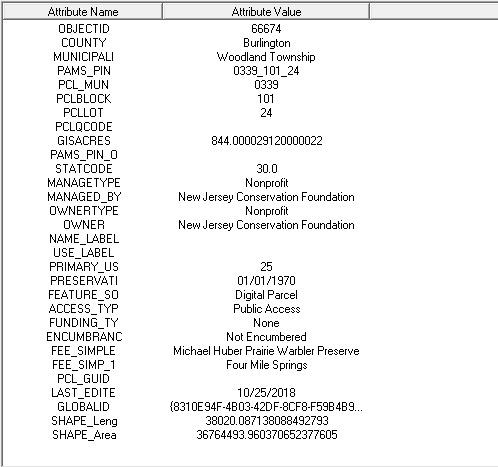 I will see what I can find also.
Reactions: Boyd

Here's the answer to my Prairie Warbler question.

"Migration brings a variety of bird-life through the area, including many songbirds. Breeding birds will be in bright plumage and birds like Prairie Warblers and Pine Warblers are regulars."

Messrs. Allen Clymer and Howard Norcross, of Haddonfield, went in search of archaeological specimens and Indian relics on Saturday afternoon. They took the train to Medford from which place they walked about four miles to a number of marl beds near Chairville. Their labors in vain here they went farther until they reached an open sandy field where they unearthed a number of good specimens including four Indian axe heads, one of which was perfect, several mortars, a large round disk hollowed out on both sides with which an Indian game is supposed to have been played, spear heads and arrow heads. These gentlemen now have a considerable collection.
Reactions: bobpbx and Longleaf Piney

The Jersey Devil may have met his final end this summer in the depths of the Wharton Tract in the pine barrens of central South Jersey. Foresters and other members of the New Jersey Department of Economic Development at work on the state owned property report the finding of a partial skeleton, half -bird and half-beast, and impossible of conventional identification. In mentioning the discovery, Conservation Commissioner Joseph E. McLean recalls that the legend has long fixed the pine barrens as the natural haunt and possible birthplace of the Jersey Devil.

"The Wharton Tract abounds in mystery," he remarked, "and preliminary diggings by specialists have confirmed stories dating back to Revolutionary War Days." While everyone accepts the mythical Jersey Devil as an amusing bit of New Jersey folklore, the Wharton Tract itself has had "a remarkably rich and colorful past."

The find, made within the last two weeks, was in a portion of the Tract damaged by forest fires during the past summer. A member of the Bureau of Forestry working near the southern end of the Clayberger and Goodrich bogs at Hampton Furnace was the first to notice the somewhat eerie remains of hindlegs, claws, partial skeleton, and feathers. Bone fragments scattered nearby indicated that when the forest fire blazed through these woodlands, it destroyed most of the creature.

Unless the remains are truly those of the Jersey Devil, it is certain, according to all who have seen it, that the weird being was stuffed and placed in the woods sometime before the fire. Two theories are offered: that it may have been the work of an amateur taxidermist bent on a hoax, or a desperate wife determined to have one less "trophy" in her husband's den at housecleaning time!
Reactions: Cedar Seeker, Steve McKee, Longleaf Piney and 1 other person

Teegate said:
I may be wasting my time because so many people here are not really interested in the history of the pine barrens it seems. In any event, I don't really care if anyone wants to see this or not, I am going to continue on.

If you have looked at any of the photos in Beck's hard cover books you may remember David Kell standing at Hampton Furnace between the ruins and the barn that was next to it. This apparently is his brother Charles.
Click to expand...

Guy, first off, a little belated, but I wanted to thank you for continuing on, people are certainly interested

. Over the last several years, my family has parked at Hampton Furnace, walked down Rider's Switch and to the trestle, it has kind of become a family tradition. It got me thinking about the history of Hampton and started doing some research. I've found some mentions in Iron in the Pines (Pierce), The Trail of the Blue Comet (Baer/Coxey/Schopp) and a wonderful passage in Forgotten Towns (Beck), which I know you are familiar with, since I've seen you quote the passage. I didn't, however, see the picture you mentioned about David Kell. Do you recall what book was that in? Whenever I assemble everything I've found about Hampton, I'll post it here. Of course, as is always the case when I research anything about the pines, I find quite a bit on this very site

The photo is in the 1936 edition of Beck's book. I scanned it from that edition. It is a photo of David Kell standing right next to the packing house we all visit, but you can't actually see the packing house. The photo shows the building that was to the left of the packing house standing along the road looking at the ruins. You can see that building here on the right. 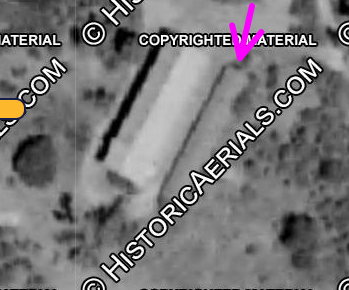 Kell is holding onto a weight forged at Hampton Furnace. I am reluctant to post the photo without input from Ben. This photo is no longer published so I really don't see why I can't.

Teegate said:
The photo is in the 1936 edition of Beck's book. I scanned it from that edition. It is a photo of David Kell standing right next to the packing house we all visit, but you can't actually see the packing house. The photo shows the building that was to the left of the packing house standing along the road looking at the ruins. You can see that building here on the right.

Kell is holding onto a weight forged at Hampton Furnace. I am reluctant to post the photo without input from Ben. Those photos is no longer published so I really don't see why I can't.

No worries... If it can't be posted than I guess I need to (eventually) invest in a copy of the original edition of the book