You are using an out of date browser. It may not display this or other websites correctly.
You should upgrade or use an alternative browser.
P

They may be referring to a guide as a leader of an organized hunt. Most clubs have a person in charge of the hunt such as a woods captain, a head woodsman, a lieutenant or a sargent of arms, and in this case a guide.
Reactions: Teegate and Boyd

Guides in the deer woods were quite common in the Jersey Pines throughout the years. Many accounts document this practice performed by locals that were familiar with the woods. In the nineteenth century, guides were expected to bring their dogs to drive deer toward their clients in a practice called hounding. After whitetail were nearly wiped out at the turn of the century, hunting throughout the state was banned for a period of 9 years in hopes of bringing the species back. Major changes to the games laws were enacted when hunting resumed including prohibitions on shooting does and fawns. The months long open season was also shortened to just 4 days. During the twentieth century, interest in hunting grew with the increased number of deer in the woods. The herd rebounded most dramatically in the Jersey Pines bringing countless hunters from Camden, Trenton, Atlantic City, and other urban areas. Frequently these groups would employ a knowledgeable local to serve as a guide and help them set up their drives.
Reactions: old jersey girl, RednekF350, bobpbx and 2 others

Did you know there were at least 3 log cabins (maybe 4) built behind Harrisville in 1934? The below article is somewhat confusing on the location so a little detective work will come into play.

Slightly edited to shorten without removing the main facts.

In the heart of the "Lost Towns Country," near Harrisia's ruined paper mill, not far from the old glass works at Bulltown, south of Martha Furnace and southeast of Calico, members of the Boy Scout Troupe No. 111, of Stratford NJ, will spend two weeks becoming "Lost Town Explorers."

(Remember, this was during the time of Henry Becks Lost Town series in the Courier Post)

Thirty-five members of the troop, in charge of Scoutmaster Ernest Cain, and Robert Peaster, A. A. Gehm and Lon Smith, members of the troupe committee, will leave today with adequate provisions and equipment for the two weeks vacation in the woods of Burlington County.

Obtaining a camp site by lease from the Wharton Estate, of Philadelphia, through the cooperation of A. A. Gehm, the boys have just completed the erection of three log cabins at the reservation, which is just off the Chatsworth-New Gretna road(679), just half a square or so southeast of the junction of this and the Batsto-Chatsworth road (563), and in back of the crumbling walls of Harrisia's former paper mill.

The largest of the log cabins, about 18x30, will be used for a mess hall and recreation cabin. Tables used at meal times can be hinged up out of the center of the cabin, offering plenty of space for diversion at night or in rainy weather. Another cabin, 10 x 14, will be used for a cooking cabin, while a third, 12 x 20, will be used for sleeping quarters. During the two weeks stay, a fourth cabin will be built, for use both as a hospital cabin and for a dressing room for female visitors to change to bathing suits.

The work on the cabin has been rushed to completion by different officers and members of the troupe at various times, in order to have everything in readiness. Last Sunday, a group spent most of the day completing the cabins and preparing sanitary arrangements, artesian well water and other details for the camp.

While visitors will be welcome at the camp any time during the day, the Scouts will observe a strict set of rules and discipline, according to the camp officers.

The question is, where exactly was this? Most likely it was at this location "behind" Harrisville as the article states.

However, it may also have been at the location of the present Bodine Field. I have other locations in mind but they just don't fit as well as the two mentioned locations. The line above saying "half a square" (50 feet) seems to place them at the current location of the state offices at the intersection of 563 and 679. But not being near water and so far from Harrisville makes that improbbable.

In any event, Jessica and I visted the first location at the above link early this morning and while roaming around she discovered this "possible" pet gravesite. It looks like if it is a pet grave there were two of them. It is a large rectangle split in half with crosses in both sections. One cross has been moved around somewhat. 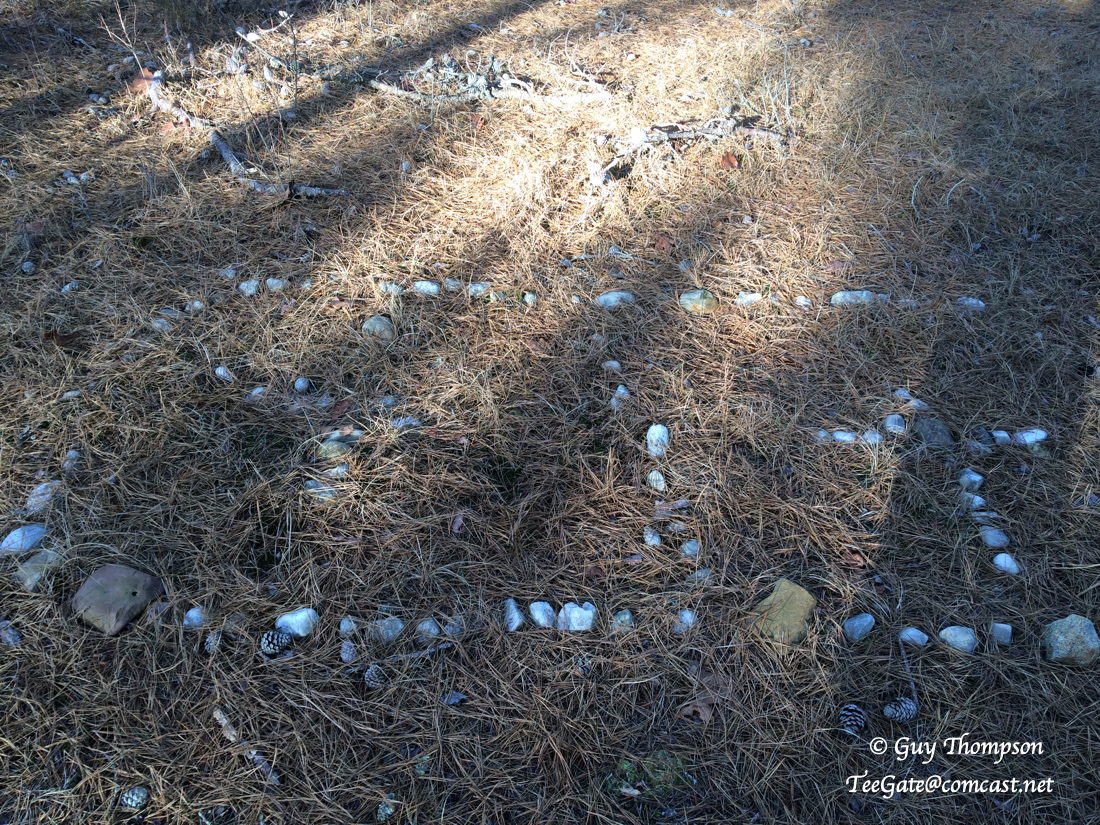 Oriental said:
Major changes to the games laws were enacted when hunting resumed including prohibitions on shooting does and fawns. The months long open season was also shortened to just 4 days.
Click to expand...

The 4 days were actually Wednesdays for a few years making it a little more difficult for a working man to get out there and hunt.
Here is a copy of my grandfather's 1916 game laws. 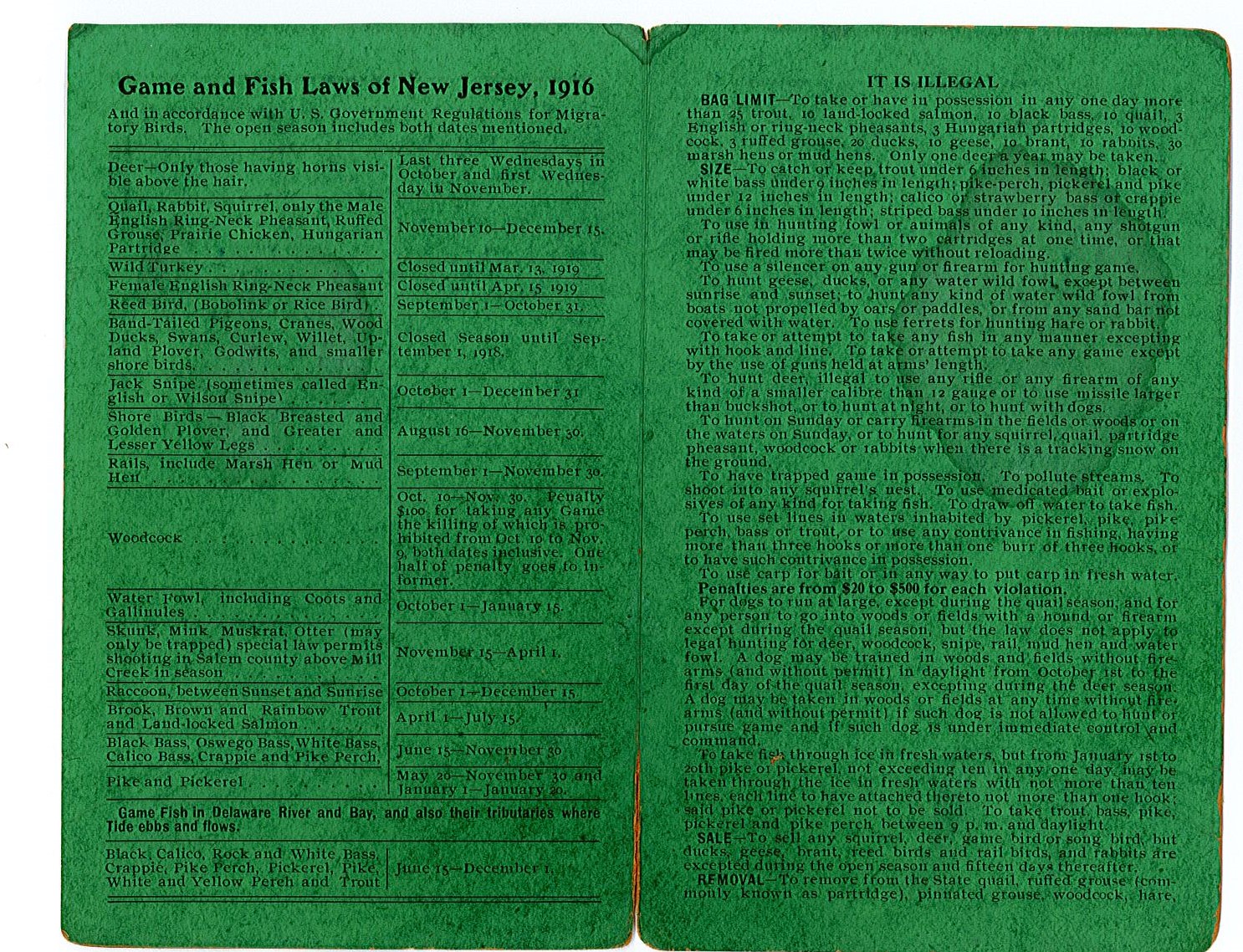 Scott, they didn't know any better back then. They thought the game would be infinite. It's disgusting how many shore birds and hawks and ducks they killed back then. There was a slaughter every year in Cape May County.
R

I'm going with Bodine Field. As a Boy Scout back in the 50's, I tent camped there a good number of times on Troop outings and at Jamborees. It was a popular spot for Scouts from all over the area at the time. With building those log cabins by the Scouts and for the purpose the buildings were being use, I feel you need a large open space, and close to a body of water. Plus room needed for parking vehicles for guest. The area had to accommodate a good number of people. And in Guy's write up the term 'reservation' was used.
Reactions: Boyd and Teegate

There's a slight difference, but that's probably due to the fact that the 1930 aerials are not very accurate. What surprises me is that they were called 563 and 679 as early as 1935. There are no route numbers on the c1949 USGS topo

So, apparently the Harrisville Dam failed between 1900 and 1930 and wasn't replaced until after 1949. That would mean the lake wasnt there at the time of that article.
Last edited: Dec 27, 2019

I saw that the lake was empty. I believe I posted sometime in the past when the new dam was built. They most likely were building it that time frame. I will have to look for that article.
Reactions: Boyd

There was a sawmill erected just upstream from where the dam is now. That was probably the only reason it looked like the regular dam was there in the earliest years. When the lake was drained they saw some timbers and whatnot showing where it was. I think it describes this in John Pearce's Heart of the Pines.
Reactions: Boyd

bobpbx said:
There was a sawmill erected just upstream from where the dam is now. That was probably the only reason it looked like the regular dam was there in the earliest years. When the lake was drained they saw some timbers and whatnot showing where it was. I think it describes this in John Pearce's Heart of the Pines.
Click to expand...

Edit: actually, before any of the time period shown on your maps Boyd. So, you are correct.
Reactions: Boyd

Was the race originally built for the sawmill?

Gibby, if you mean the race for the current dam, I doubt it. Here are some snippets from "Heart of the Pines" John E. Pearce, 2000, Batsto Citizens Committee INC.

"(Evi) Belangee also damned the East Branch of the Wading River in about 1760 and built a sawmill on the site"...."Remains of this dam were visible when the State of NJ rebuilt the main dam nearby several years ago. The site of Belangee's dam is (a) couple hundred yards upstream to the north from the main dam at Harrisville lake and lay across the old channel of the East Branch".
Reactions: Gibby and Boyd

Bob, sorry I should have been more specific. The race I was referring to was the one that can be seen on the c1890 Cook topo.

Gibby said:
Bob, sorry I should have been more specific. The race I was referring to was the one that can be seen on the c1890 Cook topo.

That's interesting. I vaguely remember seeing that somewhere on a map. Do you have more information about it?

bobpbx said:
Do you have more information about it?
Click to expand...

I don't know anything about it. I have followed the race into Harrisville, when I was scouting plant locations, and thought about how the men digging it were lucky the cut was in sandy soil. The work still had to be backbreaking.
Reactions: Boyd

When Henry Beck visited the mossing operation of Selah Bowker on Jones Mill Road in Chatsworth, one of his employees was Elvin "Buster" Leek. Beck photographed him for a newspaper article he wrote on "Jersey Industry" that appeared in the Courier Post on May 13, 1940. Elvin lived in the area along Baptist Road, and today we stopped by and visited his resting place in the Chatsworth Cemetery. 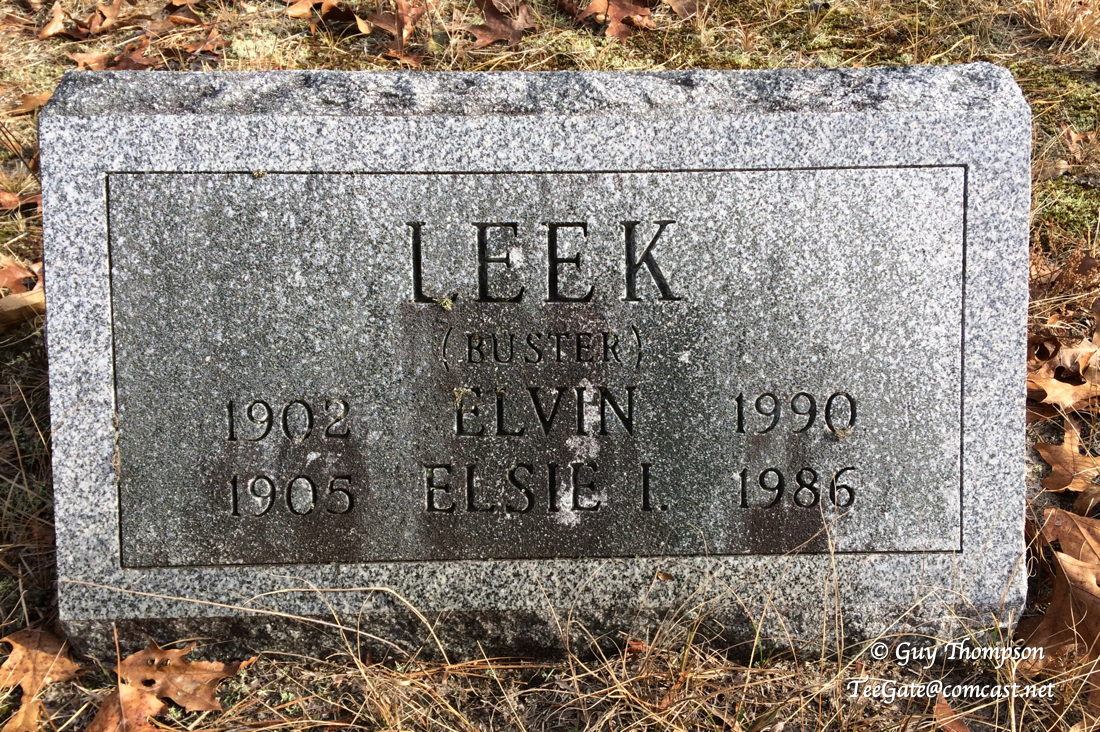 bobpbx said:
Scott, they didn't know any better back then. They thought the game would be infinite. It's disgusting how many shore birds and hawks and ducks they killed back then. There was a slaughter every year in Cape May County.
Click to expand...

There are photos of the annual shoot in Cape May County: hunters posing in front of piles of dead hawks. We do mostly do better now, counting rather than shooting. Some still cannot resist the urge, rehabbers regularly find non game birds gunshot. Hard-wired urges are hard to resist.

Just had a look in the USGS archives. The lake is on the first version of the Jenkins 24k quadrangle, dated 1956. 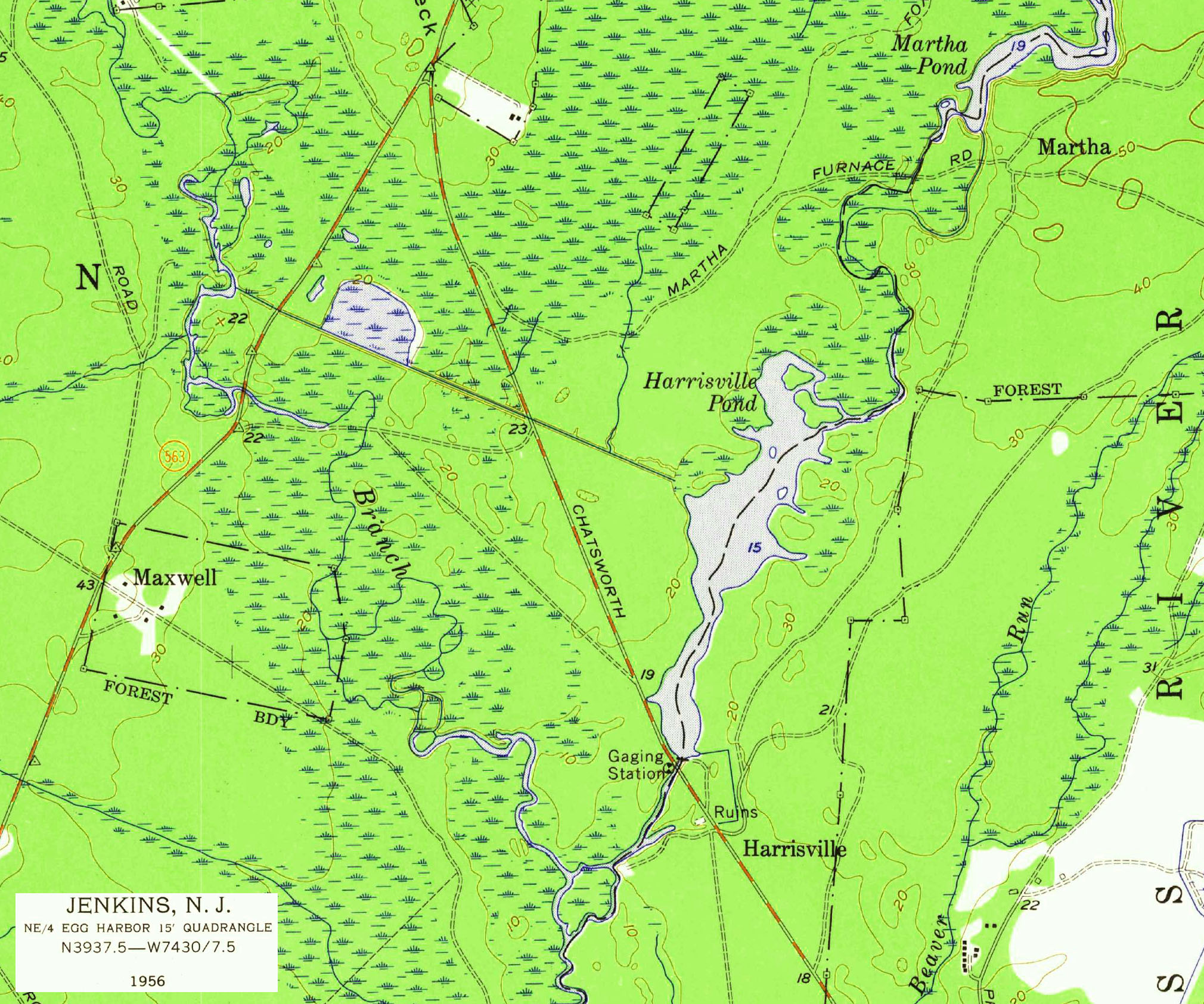