Looks like it will be a hit or miss thing, but where it hits will be heavy. Flash flood watches are up.

The Flash Flood Watch continues for

* Excessive rainfall within a short period of time can lead to
rapidly rising water and flash flooding, particularly in urban
areas and along small creeks and streams.

A Flash Flood Watch means that there is the potential for flash
flooding which can be life-threatening. Heavy rain is expected to
occur over a short period of time. Rapidly rising flood waters
may quickly inundate roadways and areas of poor drainage. Streams
and creeks could leave their banks, flooding nearby properties.

Please monitor the forecast, especially if you live in a location
that is prone to flooding. Be prepared to take action if a flash
flood warning is issued for your area.

Since Monday morning it sure has been coming down up here near Philly. Oddly enough my friend in Vineland reported that it didn't rain at all until last night. It's funny the difference 25 miles or so can make.

This is the second time this week that the weather forecast from the previous evening was starkly wrong.

What was wrong for your location? In my area I don't think there was any problem. IIRC they said a low of 75 last night with a 20% chance of rain. We had no rain last night and that low temperature was right. Today I think they forecast a high around 90 and a slight chance of rain (less than 1/10 inch). That is right on target so far at my place.

Boyd said:
What was wrong for your location? In my area I don't think there was any problem. IIRC they said a low of 75 last night with a 20% chance of rain. We had no rain last night and that low temperature was right. Today I think they forecast a high around 90 and a slight chance of rain (less than 1/10 inch). That is right on target so far at my place.
Click to expand...

Maybe I'm just cranky. The forecast was for 40% chance of heavy rain.

They had some rain in Little Falls. New Jeeps met their match.

CAUTION: Mute your speakers if you don't care for strong language in the vid.

Flooding in Brick Township this morning, really came down around 6-7am.

Last I read, they had 8-inches of rain from this round.

Wow, that's amazing, nothing like that around me. Here's the newest 24 hour rain totals. The second image shows totals for the past week. It's amazing how much has fallen in that "bullseye" North of Toms River! 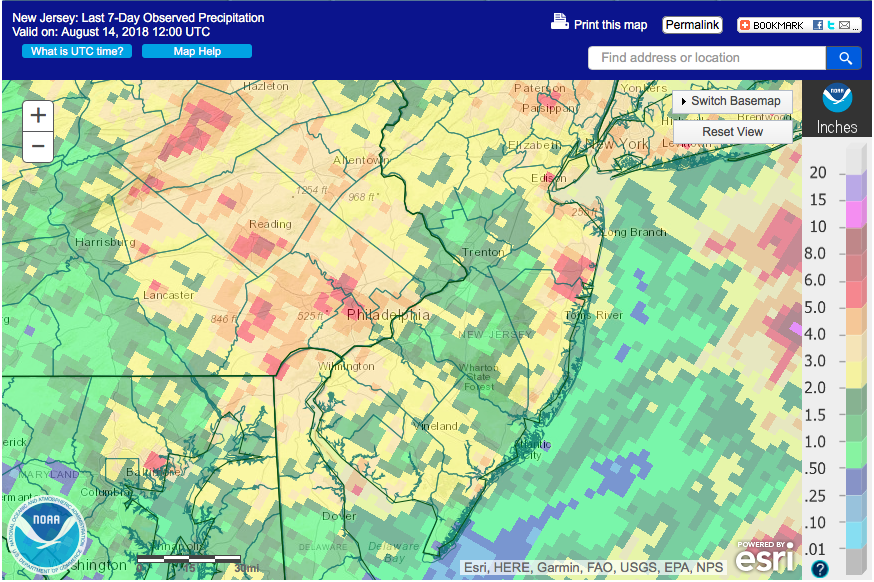 I was at Bass River SF on Monday, and it was pretty impressive. Water was pouring through waterways that usually just 'seep' or barely move. The lake spillway was all white foam at the base, and it's been mostly dry for the past couple of weeks. The trails were dry but there were clumps of stuff on them so I think they were rivers for a while.

3AM light show this morning. Continuous lightning and concussion thunder for about 45 minutes. Short power blip. Thought I was having 1966 flashbacks.

Camped last night at Goshen Pond and though we could hear thunder in the distance most of the evening, we only had a few intermittent showers. Didn't stop anyone else from camping though, every single campsite was full and some drunk people showed up around 10pm who proceeded to set up camp between our campsite and the next one, without a permit or reservation (they did ask my permission first, i said sure, but warned them that the SF Police might question it). Got out just in time, the heavy rain started on our way home.
Reactions: Boyd and Teegate

We were heading down Hampton Gate Road this morning and a lone hiker that appeared to have camping gear was almost reaching 206. I would have to think he may have camped out last night also. Maybe by Carranza or stealth.

The next 10 days are looking simply gorgeous, and then it's Labor Day weekend.

Was surprised to see we had over an inch of rain here last night, didn't hear any storms. The cooler nights are going to be great over the next few days.

We had some light thunder and lightning after midnight with rain last night. I have a huge crop of mushrooms, might try the ones the rabbits and squirrels are eating fried up with some onions. I'll check for any dead rabbits or squirrels first though.

Autumn will soon be in the air. Racoon Ridge Hawk watch has begun, Cape May starts 9/1, next Saturday.

Cape May Hawkwatch – September 1 to November 30
Sunrise to 5:00 P.M. in Sep/Oct, sunrise to 4:00 P.M. after switch to EST in Nov. Join CMBO naturalists on the Hawkwatch Platform at Cape May Point State Park under one of the greatest hawk migrations in North America. The Hawkwatch is a partnership project with the N.J. Division of Parks and Forestry. This year's counter is Erik Bruhnke.
Click to expand...

We were driving north/west on Hampton Gate road around 9:30am sunday, must have just missed you. The weather wasn't great and the only other person we encountered was a guy in a tan colored older Toyota truck.


Teegate said:
We were heading down Hampton Gate Road this morning and a lone hiker that appeared to have camping gear was almost reaching 206. I would have to think he may have camped out last night also. Maybe by Carranza or stealth.
Click to expand...

Light rain here now. Looks like some of Burlington County in the pines area got wet.

Another failed forecast. I had a plan today, and it was 50% chance of showers last night, so was hopeful. This morning it jumped to 60% so I bailed. Now, it is only 20%.
R

I left for the Pines this morning at 8:30AM, not even looking what the weather was suppose to be today. Driving out Route 38 toward Pemberton Lake, getting over to 4 Mile Rd, it looked like it was going to rain any second. The guy on the radio said rain. Well, I got home about 1:30 without any rain at all. However, it did look like it did rain earlier in the Pemberton area. But not much. I'm glad I didn't change my plans.
You must log in or register to reply here.
Share:
Facebook Twitter Reddit Pinterest Tumblr Email Link
Top Bottom