...FLOOD WATCH REMAINS IN EFFECT FROM THIS EVENING THROUGH LATE
FRIDAY NIGHT...

The Flood Watch continues for

* Delaware, northeast Maryland, most of New Jersey, and portions
of southeast Pennsylvania.

* From tonight through late Friday night

* Periods of light to moderate rain will continue today, and then
heavier rainfall will move into the area later tonight. Periods
of moderate to heavy rain will persist through at least Friday
night, and possibly into the weekend. General rainfall amounts
of 2 to 4 inches are expected over the next 72 hours with the
highest totals occurring along and south of the Interstate 78
corridor. Locally higher amounts over 5 inches are possible in
slow-moving thunderstorms.

* A variety of flooding types are possible. Low-lying and poor
drainage flooding will be the most common type of flooding to
develop. Flash flooding will also be possible if thunderstorms
repeatedly move over the same locations, especially in urban
areas where rainfall runoff is maximized and where small
creeks and streams respond quickly. Flash flooding occurs
quicker than other types flooding due to the torrential rain
thunderstorms can produce in a short amount of time. Several
days of excessive runoff will eventually lead to a risk of
flooding in larger streams and rivers though the extent of the
flooding will depend on where the heaviest rain falls.

A Flood Watch means there is a potential for flooding based on
current forecasts.

If you live across the Passaic, Raritan, and Rancocas basins in
New Jersey or the Neshaminy, Schuylkill, and Brandywine basins
across Pennsylvania and Delaware, keep an eye on later river
forecasts. These forecasts, as well as all of our hydrologic
forecasts, can be accessed via our Advanced Hydrologic Prediction
Service website. Those living in areas prone to flooding should
be prepared to take action should flooding develop.

Boyd said:
If you live across the Passaic, Raritan, and Rancocas basins in
New Jersey or the Neshaminy, Schuylkill, and Brandywine basins
across Pennsylvania and Delaware, keep an eye on later river
forecasts.
Click to expand...

and the old standby;
https://waterdata.usgs.gov/nj/nwis/rt

It was a wet week! We definitely got more rain in the Southern Counties. 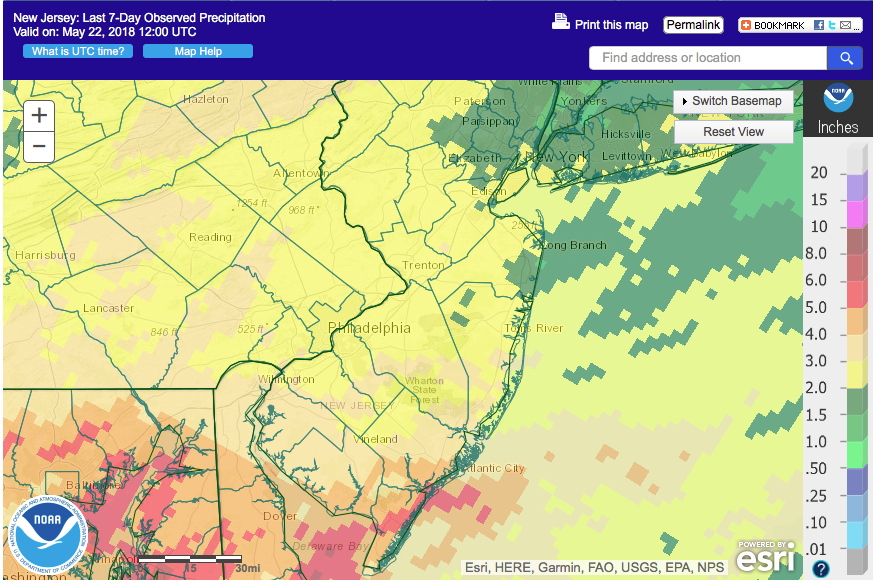 
Zach McGarvey said:
Had a sudden hail storm last night around 6:30 pm that really pummeled the house and cars. Wasn't even time to run out and move my truck to the garage. The funny thing was, when I called my friend who lives one mile down the road and said "look outside, are you seeing this?" he answered "seeing what?". It seems like everywhere else just got a little thunder shower.
Click to expand...

Here are 24 hour rainfall totals from 8:00 AM Saturday through 8:00 AM this morning. The forecast for my area was calling for between 1/2" to 3/4" rain overnight, but everything was dry as a bone this morning. Quite a variation in rainfall across our region. 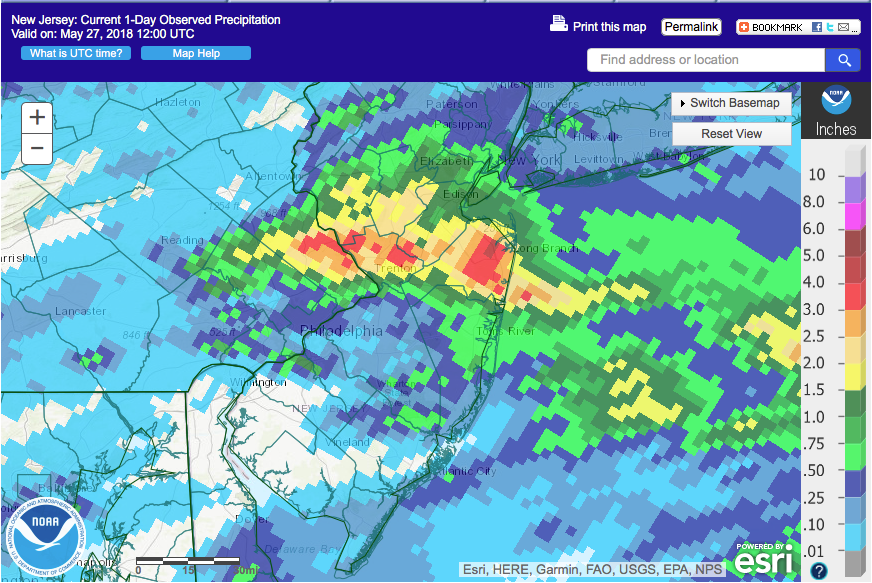 Looks like sunshine will be in short supply for awhile again.... current NWS forecast says mostly cloudy with a chance of rain every day through next Tuesday.

I really think we should start calling the period from mid-April to early June the "wet season", or perhaps "moody monsoon time". This has really been a fundamental shift in our local weather pattern in my experience. This seems to have started about 8-10 years ago (only going on memory).
Reactions: h2ochild

There's actually very little rain in the forecast, just endless clouds and drizzle. There is no mention of the sun until next Tuesday. No rain here today but the humidity is 87%.
Last edited: May 31, 2018

Boyd said:
There is no mention of the sun until next Tuesday.
Click to expand...

Clouds from El Salvador to Newfoundland, but little precip on the maps. Around here its occasionally mist-like. Great weather for bloodsuckers.

Just stepped outside to put out the trash. It's brutally humid out there.
Reactions: dogg57

Sun out up here. Feels great!

When I was building our cabin I had to run one for a month straight before the wood floors could be installed. Had the drain plumbed thru a condensate pump and out the window. Amazing how much water is in Adirondack air

You sure that AC is working properly? It should bring the humidity down much lower than that.

Outside humidity is 98% this morning. If it goes any higher we will need gills.

this_is_nascar said:
You sure that AC is working properly?
Click to expand...

It's a window air conditioner and it works fine, nice and cool. The rest of the house is not air conditioned. This is typical for what I see on hot, humid summer days

Boyd said:
It's a window air conditioner and it works fine, nice and cool.
Click to expand...

Sometimes those units tend to freeze up with ice when the humidity and temps get high.

Actually I was just posting something that I found "interesting". Was not really looking for HVAC advice.

But the humidity meter is at the far end of a room with a dividing partition. It is probably lower if measured closer to the air conditioner, there isn't a lot of air circulation in the other part of the room.

Boyd said:
Actually I was just posting something that I found "interesting". Was not really looking for HVAC advice.

This is a forum, you get it whether you want it or not

Unless there is a disclaimer 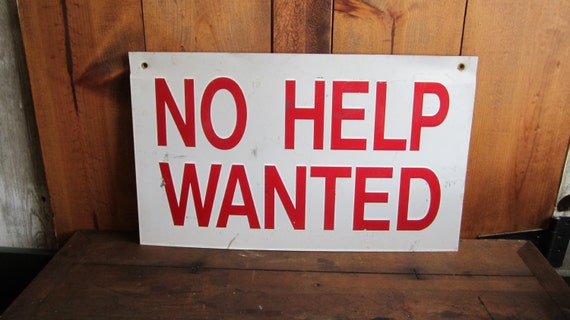 Have been watching this storm develop all afternoon, looks like some of you are getting really heavy rain. It is moving South very slowly, wonder if it will make it down to me? 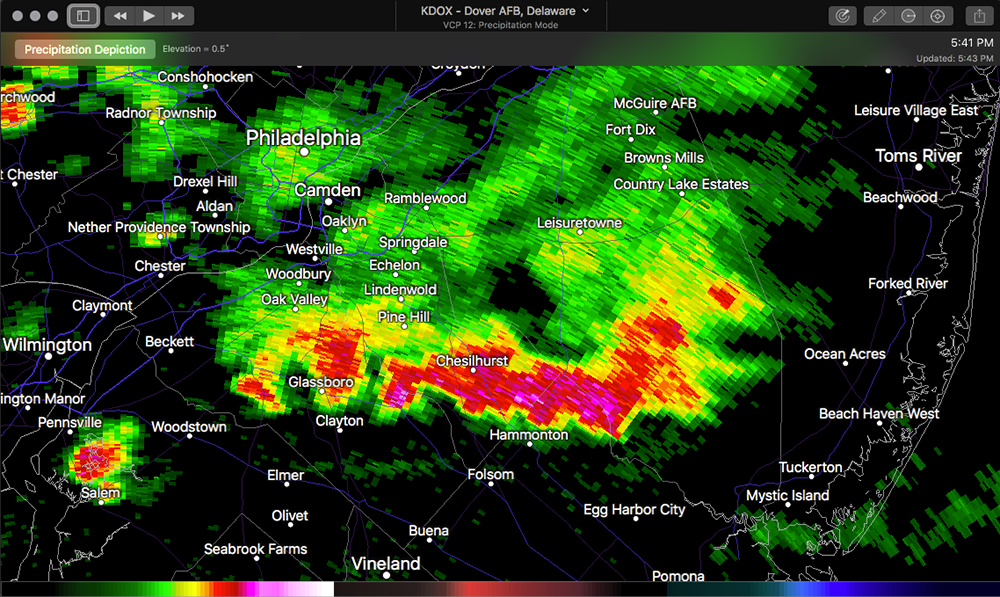