At this moment I am unsure what location this was at. I am thinking it was taken on Eagle Road by the oak tree. I will investigate this.

Update: Richard Franzen from the Tabernacle Historical Society asked Ed Batten about this car. Here is his reply.

It’s a Ford Model A. Don’t remember what year. It belonged to Clinton M Kandle who owned Clintons Lumber Yard in Pitman. He was one of our Clubs Founders. When Clint passed, it went to his son Marty. Last I had heard it had been completely restored and looked marvelous. Marty passed a few years ago, and I believe it went to his Nephew (oldest sisters son).
I hope that helped. 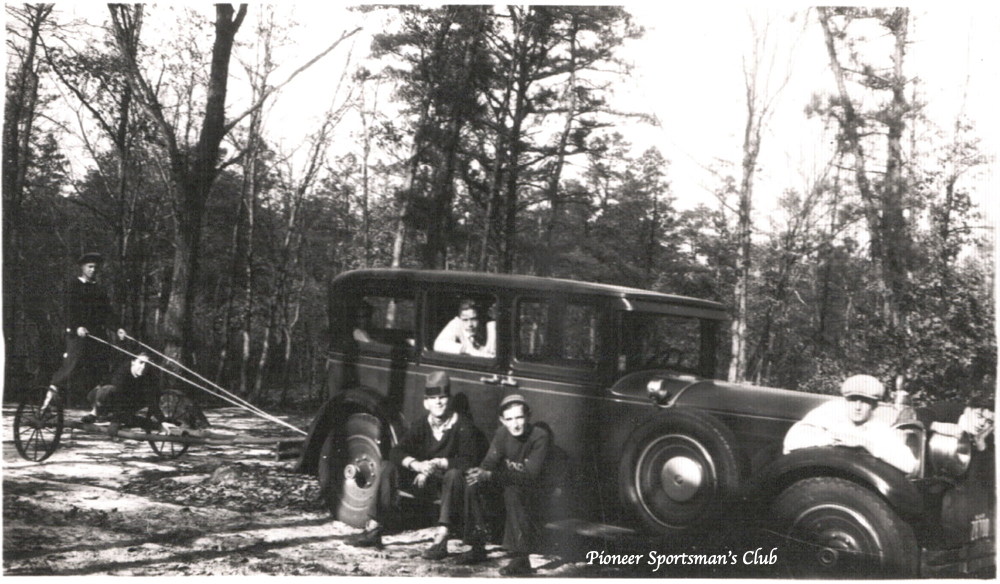 Now some of the information I acquired.

The Pioneers as I mentioned hunted with the Gloucester County Stag club in Atsion. They had a disagreement from an alcohol related incident and a group of them started the Pitman Pioneers (1946) and as I mentioned the name changed a year later to the Pioneer Sportsman. The original members were 5 individuals with one being Clint Kandle who ran the Kandle lumber yard in Pitman near the RR tracks which his father had founded. Many of the original members were from Pitman and many of them were members of the Highland Chemical Fire Company in Pitman. Clint Kandle's son Marty also became a member and was still alive when I was acquiring some of the info in this post. Unfortunately, I never did get a chance to acquire anything from him.

The wood in the photo above (Post #1) that shows the remains of the building along Carranza with the man walking, laid there for quite a few years until someone started the wood on fire.
Reactions: bobpbx

Teegate said:
Before we move forward .... the early Pioneer members were affiliated with the Gloucester Stag Club in Atsion but there were alcohol problems. So some of them broke off and started the Pioneers without alcohol. However, after a while it was hard to keep members so that rule was dropped.
Click to expand...

No alcohol at a gun club deep in the Pines? What were they thinking ?

RednekF350 said:
No alcohol at a gun club deep in the Pines? What were they thinking ?

Obviously they realized that fairly quickly

RednekF350 said:
No alcohol at a gun club deep in the Pines? What were they thinking ?

Scott not as crazy as it seems. Janvier in New Gretna is a dry club or at least they were last I was in there. Some clubs have folded because people like to party too much while other people want to hunt.
P

Richard Franzen from the Tabernacle Historical Society has added this to their site.

imkms said:
One of the pics mentions “Carranza State Park”, is that accurate? Haven’t heard of that before.

Teegate said:
I have not found the map as of yet. I will continue to look.
Click to expand...

I found this interesting and since I'm spending all my time digging through the USGS Historical Topo archives these days, I had a quick look. Couldn't find a map with "Carranza" however the 1956 Jenkins quad simply says "State Forest" without any name. 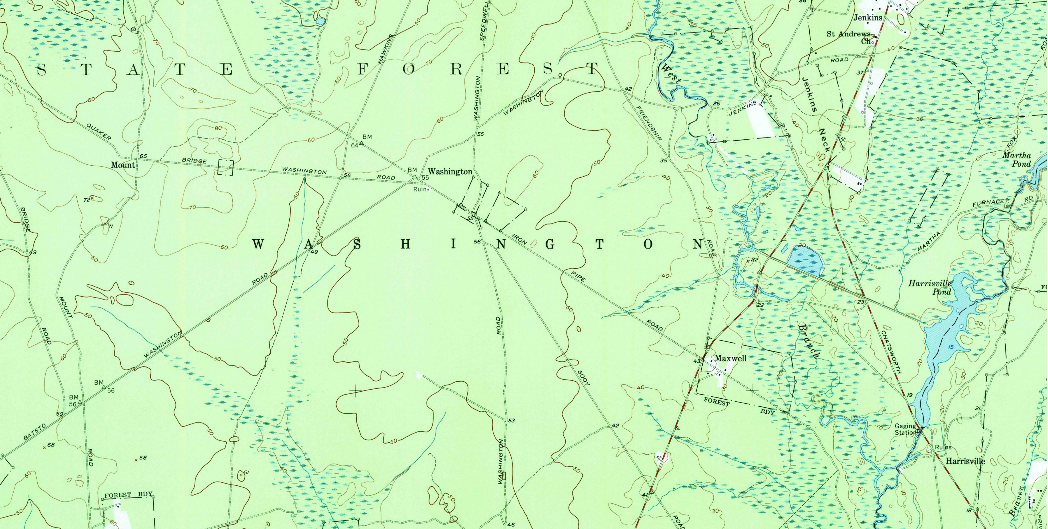 When it was revised in 1997, they changed it to "Wharton State Forest". 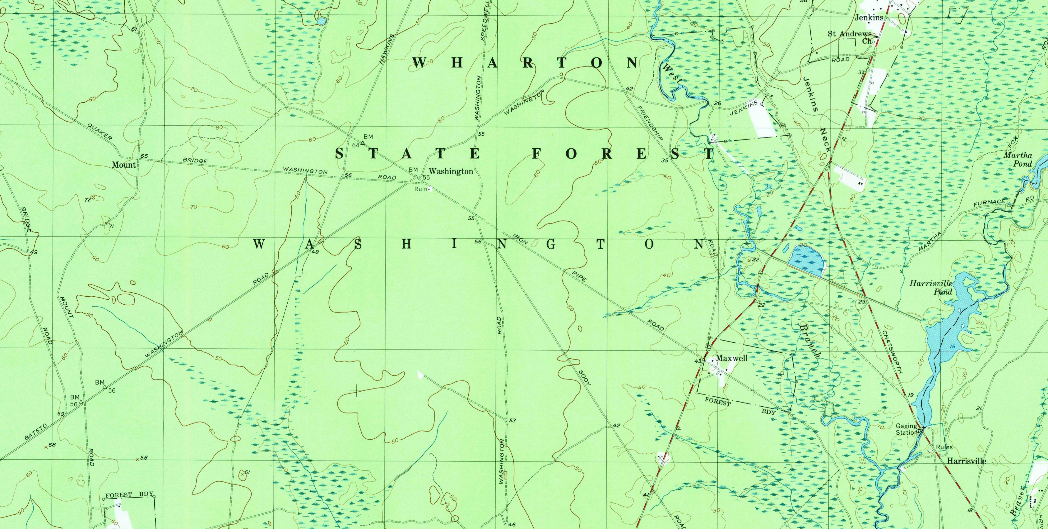 When was the name "Wharton State Forest" first used? Wikipedia says 1954, citing this 2005 proclamation recognizing the 50th anniversary of Wharton:

"the State of New Jersey first acquired lands that were designated Wharton State Forest on December 30, 1954"

I suppose that was too late to make it into the 1956 topo.
Reactions: Teegate and stiltzkin

I looked quite a bit through my maps and could not find Carranza State Park again. I have so many that it would take me forever to go through each one but I will continue to look and if I find it I will post it here.
Reactions: turtle and Boyd

I am getting close.

The Mexican Government plans to erect a memorial to Lieut. Emilio Carranza on the spot near Chatsworth, N. J. where the Mexican flier was killed in a plane crash July 12. State Senator Clifford R. Powell said the Mexican Government had asked the State Department for permission to acquire land for the purpose and that the request had been referred to the State of New Jersey. Powell said he had asked State authorities to acquire 50 to 100 acres so that a park can be maintained around the monument. If necessary, he would ask the Legislature to appropriate funds, he sald.

Teegate said:
Here is a portion of an article from 1935 on the Carranza Memorial lot. It tells us that in 1935 it was turned into a park when most likely the parking area in the back was built.
Click to expand...

There is a clearing at that location on the 1930's aerials. The metadata says these were taken in the "early 1930's".

Looked around the archives a bit more. The 1951 24k topo shows the Carranza Memorial but no parking area, although there is a smaller clearing. This might just be a lack of detail in the map however. 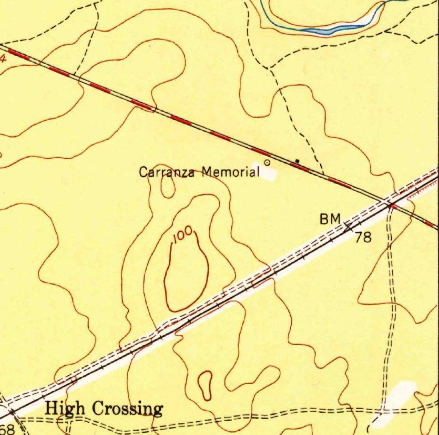 The 1957 24k topo shows the parking area. Neither of these show Wharton State Forest, that doesn't appear until the 1995 revision (there were no updates between 1957-1995) 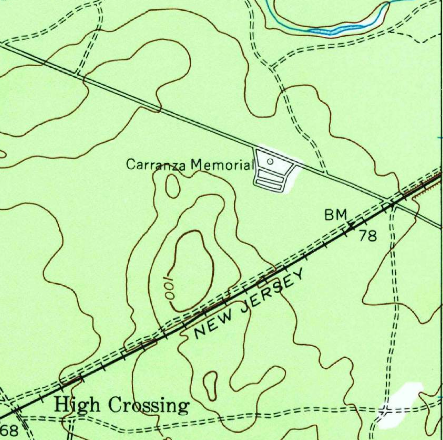 The 1959 250k map does not show the memorial or Wharton State Forest. It is generally pretty thin on details however. 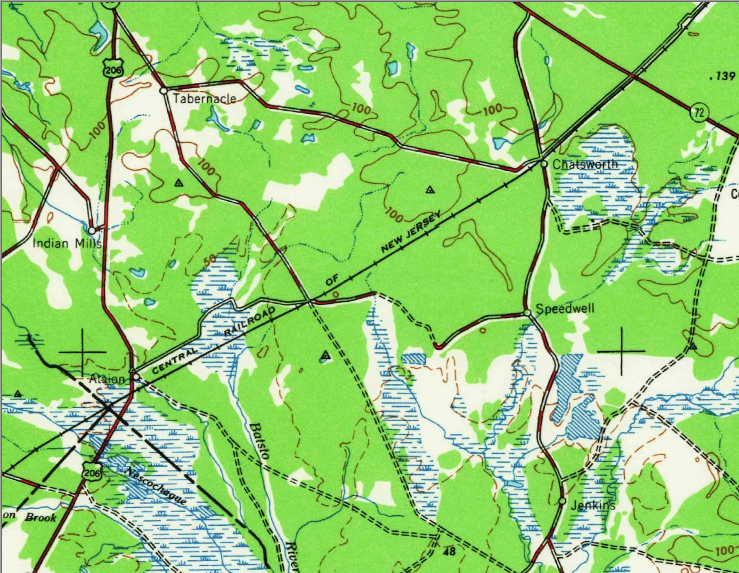 The 1961 250k topo shows both the memorial and Wharton State Forest. 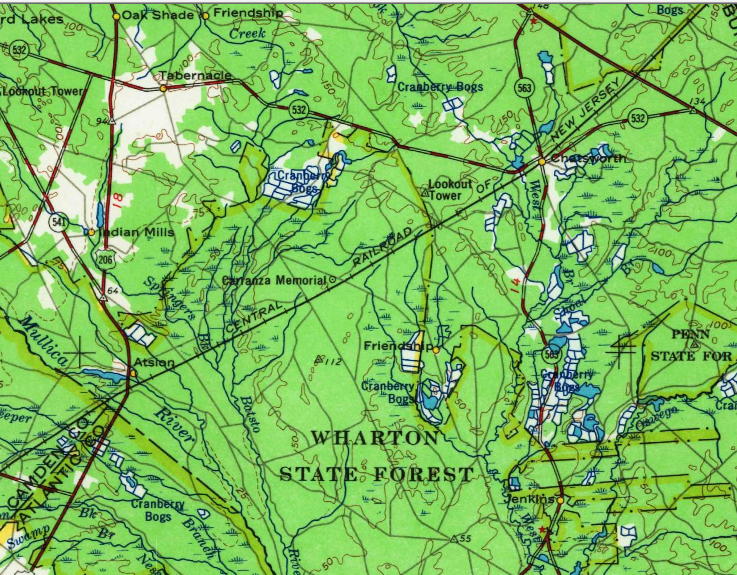 This is interesting, the 1942 62k topo appears to show a building with a driveway at the location of the Carranza Memorial. 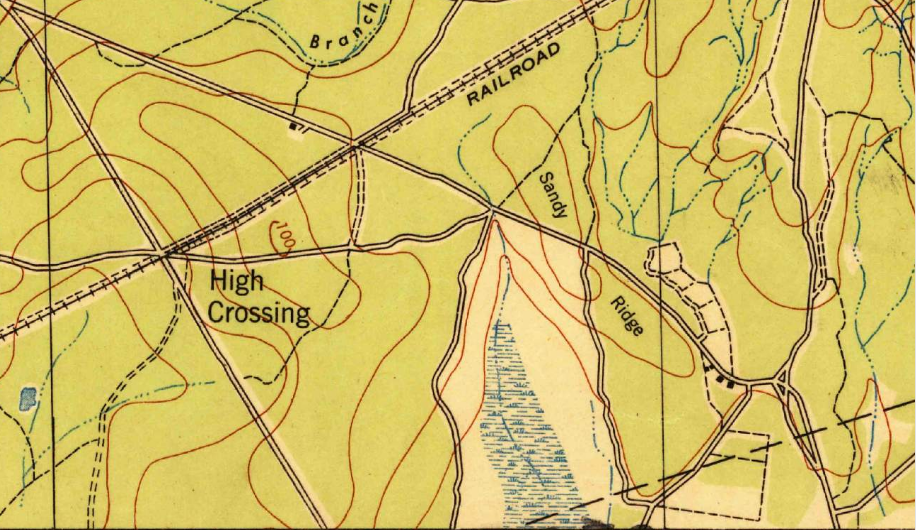 The next revision (also the final of the 62k series) was in 1949 and it shows the memorial. Interestingly, it shows a building across the road from the memorial. 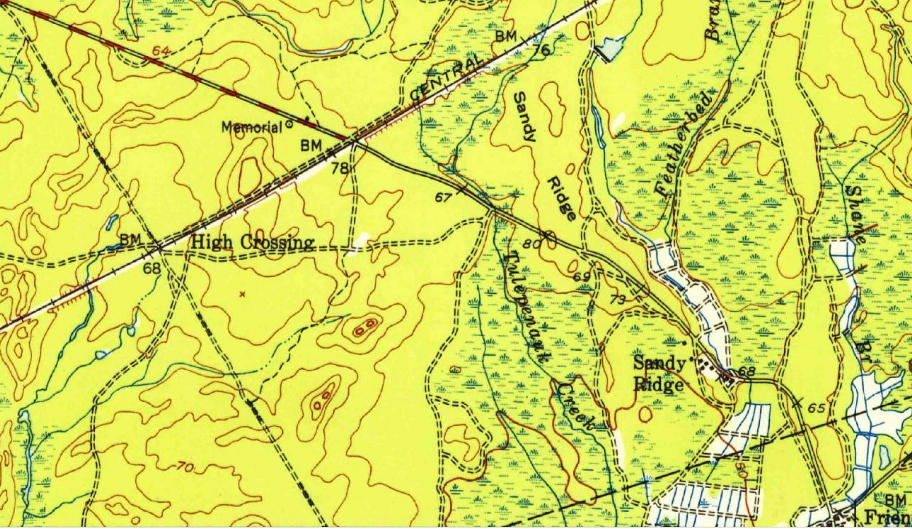 FWIW, if you want to look at these maps yourself, here are direct dowload links for the PDF versions

I am going to go out on a limb and make a guess as to what the square is in the last map. Since it is a state park as we know from the Pioneer photo, they had a bathroom there for visitors.
Reactions: Boyd

While conversing with Ed Batten in the past he mentioned a man named "Hilly" lived in the big house at Sandy Ridge with his younger wife and multiple kids. Richard Franzen from the Tabernacle Historical Society acquired the 1950 census which tells us that Hilly was actually Earl Hill, born 1887 age 63, and his wife Rose Ann, born 1926 age 24 and their 5 sons. Remember, this was the 1950 census and their may have been other children not there yet. I say this because Marty Kandle claimed their may have been more. Anyway, the children were Earl age 7, Edward age 6, Robert age 5, Barry age 1 and Thomas age six months. Judging from the ages of the children there must not have been much to do in Sandy Ridge back then except.....

Marty Kandle says one of the Hill children went on to become a Trooper.

The 1950 census also tells us that 3 of the homes in Sandy Ridge were vacant.
Reactions: Boyd

Ed Batten is quite the intelligent individual, and around 10 years or so ago he visited Sandy Ridge with the Pioneer president at the time and did some investigating. This would most likely be 2/25/2013. He sent this to me on 2/27/2013. The surveyor drawing he mentions is the one in post 10 from Ed Campbell.


Sometime when it’s warmer, I would like to measure all of the foundations (is “piers” a good way to address them), get the total number of piers, measure width/length of each and the distance between each. As you know, “the devil is always in the details”!


I count 26 faces in the picture of the 1947 Hunting Party. Do the math, and that makes 45 Square Foot per hunter.


I’ve taken a few good looks at the pictures of the Cabin after they added the wings/additions to the sides. Maybe it’s just me, but the pitch of the roofs, and the age/type of the siding look similar, if not identical. While we can probably never confirm it, but I think that the Club bought the “Pickers House”, cut it in half, moved it from north of Hilly’s house, to our Cabin, and attached it to the main Cabin. Dad always said that we purchased a “garage“ type building and attached it to the sides.”


Up front, let me preface that all I said above, and what will follow is conjecture based on what we measured, “eyeball” measurements made from viewing the pictures, and the approximate dimensions indicated on the surveyors drawing. In short, I am not claiming any degree of absolute accuracy.


Per the above, I make the approximate dimensions of the main (Pioneer Cabin) building (without the back shed/kitchen) to be 18’ by 26’. Looking at the pictures, I make the width of the two “wing” additions to be approximately the same width as the main building (18’). Looking again at the pictures, I think that the length of each addition could be the same, but is probably a bit shorter than the full length (26’) of the main Cabin.


Looking at the Surveyors drawing, the approximate dimensions, of what I presume to be the Joe Johnson house, is 18’ by 32’. Likewise, the “Pickers House is listed as being 22’ by 125’.


Here’s the first rub..I find the 125’ estimated length of the “Pickers House” to be a bit much. For comparison, that’s 45’ foot longer than the Cabin we currently occupy at “Big Oaks” (30’ by 80’). I cannot think of any building at Friendship (or any other Bog) that was that long except for the Packing House. And, the Packing Houses were not intended for use by once a year itinerant pickers. Of course it could have been a multi use building to include equipment, pickers “combs”, etc. Still, 2750 (22’ by 125’) is a lot of square foot! (It would be interesting to know if the “Pickers House” had a floor or was simply sand. I presume that the Joe Johnson house had a floor.)


I have shifted my position from the earlier (above) e-mail, and presume the the building that was used to create the Pioneer Clubhouse additions/wings to be the “Joe Johnson” house. The 18’ is closer to what I’m guessing the width of our main Cabin (former Charles Edward Holloway house) to be. Plus, the length of 32’, if cut in half would make the additions/wings to be a 16’ long. That’s a bit short by what my eyeball measurements make me want to think, but I’m somewhat comforted that the surveyor admits his measurements are approximate.

If I had a 24 year old wife at the age of 63 I could not hold back either.
Reactions: Wick and Boyd