I was helping a friend delineate reputed old Catholic church in Estell Manor that no one could remember, so noticed the absence of access for a couple days. Switching between maps, I was able to deduce the site probably dated back to the original railroad-era settlement. A number of similarly aged parcels were abandoned about the same time. We suspect a forest fire may have wiped out this community but more work is needed to test the hypothesis. It was a royal pain to switch between NJPB records and my personal set of 1931 aerial photomosaics. I'm spoiled by this site. The maps provided by B & B (Ben & Boyd) are indispensable.

FWIW, I noticed the problem here but assumed it was just some kind of glitch: http://forums.njpinebarrens.com/threads/just-saying-thanks.9421/#post-113547


Boyd said:
For some reason, the NJGIN layers of Ben's map aren't working for me right now
Click to expand...


Thanks for fixing it Ben.

Jerseyman kindly offered to run with the few clues I had to go on. As usual, he did not disappoint. Here’s three relevant excerpts from Leahy’s (1906) The Catholic Church of the Diocese of Trenton, N.J., which is available online: 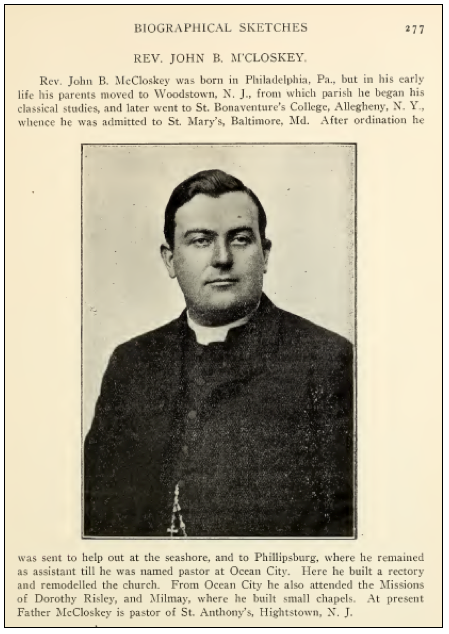 Risley, Atlantic County, N. J. ​
(Risley is an old name for Estell Manor)​
St. George's Church.​
The first Mass was said at Risley by Rev. Aloysius Pozzi of East Vineland. This was on March 17, 1898, and the people gathered in the public school house. Father Pozzi came regularly once a month at first, but later he attended twice a month. Mr. Hagerty, Mr. Devitt, George Jeffreys, George Greller and Miss Lott, were the leaders in the work of the establishment of this Mission. Mr. Risley generously donated a site for the church, and in 1903, Rev. John J. McCloskey, of Ocean City, opened a little chapel, which proves a great convenience to these Catholics. When, in January, 1905, Father McCloskey left Ocean City this Mission was supplied by Rev. John A. Caulfield, his successor, till September, 1905. Father McCormick of Milmay is at present in charge. The church was opened on April 26, 1903, and blessed by the pastor, Rev. J. B. McCloskey, and placed under the patronage of St. George. Mass is said on the third Sunday of each month, at 8.30 A. M. (p. 198).​


Dorothy, Atlantic County, N. J.​
St. Bernard's Church.​
The Catholics of this district formerly attended East Vineland. About 1900 it was attached to Ocean City under Father John McCloskey, who, in 1903, built a small chapel for their convenience. The chapel was dedicated and opened for service by Rt. Rev. James McFaul, on June 21, 1903. On this occasion the Rt. Rev. Bishop confirmed twenty-eight children and six adults. Mass is said monthly, and these poor scattered Catholics fully appreciate the privilege they now have, and St. Bernard's will be a centre of religion and do much to preserve the faith in that section. At present (June, 1906), this Mission chapel is attended by the Rev. Theodore McCormick, who resides at Milmay. Father McCloskey having left in January, 1905 (p. 110).​


Milmay, N. J.​
St. Mary's.​
Whilst Father Pozzi was busy attending to his Italian Catholics scattered through South Jersey, yet he did not refuse a helping hand to other races, for in February, 1898, we find him opening a Mission for some Poles and Hungarians, who had settled in and about Milmay. Through the kindness and influence of Mr. Kupetz he was enabled to attend at first monthly, and later twice per month, coming from East Vineland. Mass was said in private houses till 1901, when the Mission was attached to the newly erected parish of Ocean City, then in charge of Rev. J. J. McCloskey, who built a small chapel, which was opened for service June 5, 1902. As these people were very poor it was the kindness of the lumber merchants of Ocean City, who furnished the material, and the generous people of the Sacred Heart Church, Trenton, and St. Philip's Church, Philipsburg, who supplied the needed cash for its erection. Services were held the first Sunday of November. After Father McCloskey came Father John A. Caufield, who in 1905 was the pastor of Ocean City. The present pastor is Rev. John H. Sweeney of Highlands (pp. 197–198).​
​
I'll provide the location once it's been vetted.​

You might want to move that data into it's own thread. Having it be buried in this thread will make it harder for others to find that good information in the future.

Ben, I had stopped using them in the woods because they were taking forever to load or not loading at all but this week they have worked perfect. Thanks again!

I finally had some time today at work to look at this thread and have to say this is fantastic, what a great tool! Thank you!!!
Reactions: Ben Ruset

FWIW - looks like the NJGIN layers of the NJPB Maps aren't working again.... nothing happens if I select them but the Google layers work properly. Maybe just some kind of temporary outage?

Boyd said:
FWIW - looks like the NJGIN layers of the NJPB Maps aren't working again.... nothing happens if I select them but the Google layers work properly. Maybe just some kind of temporary outage?
Click to expand...


I just checked and they are working for me. Their server might have been having issues.

One thing that I have found handy is one of those web developer toolbars that they have for Safari or Firefox. With them you can see the URL of the images the browser is trying to fetch and see if there's any 404 errors or whatnot. That's how I finally found out that the WMS server URL had changed the first time.

Let me go on record and say that I LOVE your Lidar maps. Absent any geophysical survey of a site, these are the next best thing.

I just wish they were in higher resolution.

Yeah, it would be nice to zoom in farther. But 10 feet per pixel is actually pretty good. You can use the zoom command in your browser (cmd+ on Safari, control+ on Firefox, etc) and although it doesn't actually show any more detail, I find it easier to see when enlarged.

I think the state may have some better LIDAR imagery now. You can send a hard drive to NJGIN and they will load it up with everything at no charge. One day I might do this, but not now. It might actually be the full "point cloud" data which I have never worked with. But I believe you can extract different layers from it showing structures, even trees and things.

I have an issue with Live Maps ever since upgrading to Mavericks. The pointer disappears when I drag and drop it. I have to zoom in or out to get the pointer back. I made a movie for you to see it. A little jerky when zooming in and out but the pointer issue shows up well.

That's what you get for upgrading to Mavericks.

I'm assuming this is Safari. Does it still work as expected in other browsers?

I did forget to mention it was Safari. Firefox seems to work fine.

Well there's probably some Javascript change or bug in Safari on Mavericks. I'm not upgrading any of my Macs until I absolutely have to so you might want to use Firefox for the maps for a while.
A

I need some help finding a map.A while back I viewed a rather large map on this site that covered southeast PA and south jersey.It was from the 1800's give or take.It was very detailed with home locations and roads.I've looked at most of the maps on this site and just can't seem to find it again.Anyone? Thanks Joe

auto said:
I need some help finding a map.A while back I viewed a rather large map on this site that covered southeast PA and south jersey.It was from the 1800's give or take.It was very detailed with home locations and roads.I've looked at most of the maps on this site and just can't seem to find it again.Anyone? Thanks Joe
Click to expand...

Did you check all of these?
http://gallery.njpinebarrens.com/showgallery.php/cat/69

Wow, so many of us share an interest in maps!

You probably won't find the map you're looking for here, but this is the USGS collection of free New Jersey historical topo maps. Some pretty cool stuff. You can also search what's available for other states in the box on the left: