Considering the junkyard, I was floored to see that they have increased the amount of vehicles in there to 100% of carrying capacity (based upon what I see). I'm really surprised that they and the Lacey Road Junkyard are allowed to operate in the preservation district. Lacey had zero cars for a couple years, but then ramped up again.

Bob there are a few yards in the preservation that are operating and from my opinion are at max capacity. I'll refrain from names and locations.

As my wife is recuperating from surgery, Jessica stayed home and I spent three hours Saturday walking around the Greenwood Forest in the area between Coyle Field and Red Oak Grove. I revisited the SB stone which I am pretty certain is one of the property corners of Samuel Bryant and the Red Oak Grove Tract. It has been there at least since 1857 which was the year Samuel Bryant died. I am truly surprised it still survives. Bryant lived at Red Oak Grove, and the cellar hole for what apparently was his home is still there right along the road if you know where to look. Here is an old map with an incorrect spelling of his name showing it's location next to the road. 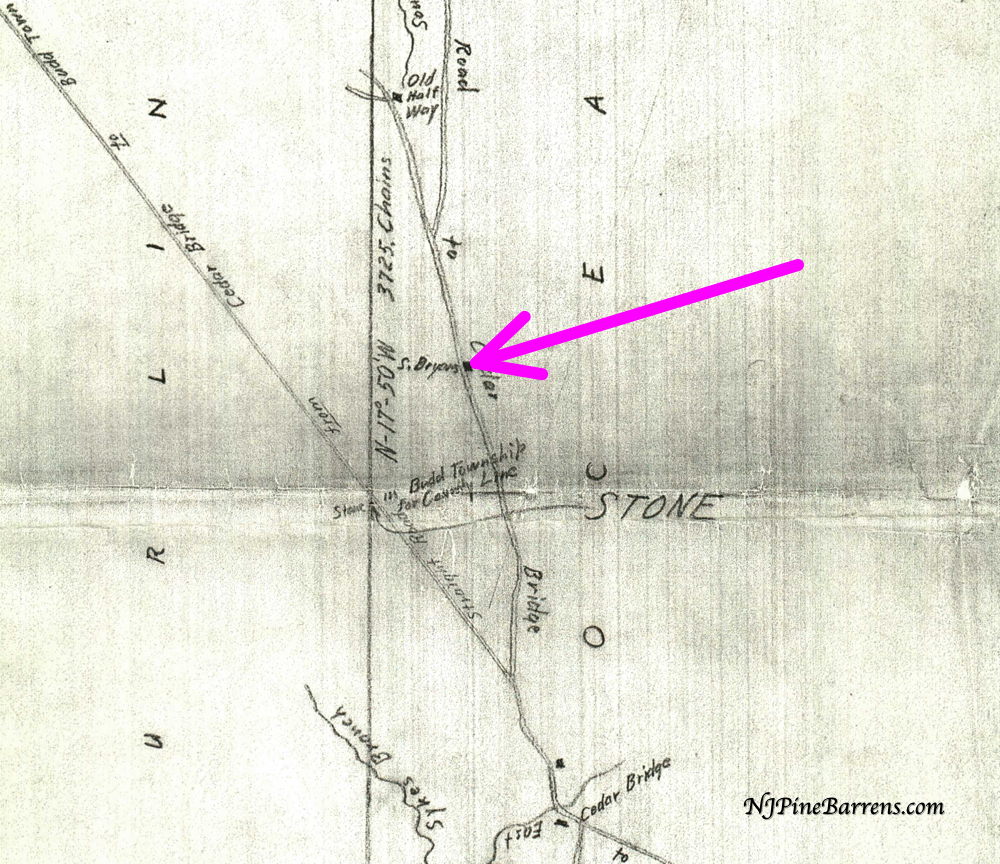 The SB stone appears to be an old cemetery lot corner stone as it has holes in two sides 90 degrees apart. This first photo was taken 0n 1/4/2004. It appears clean and looks well. The second photo was taken yesterday and the stone appears to have the some mold that seems to be appearing on sidewalks everywhere. I suspect pollution. However, the stone is fully intact and is well. 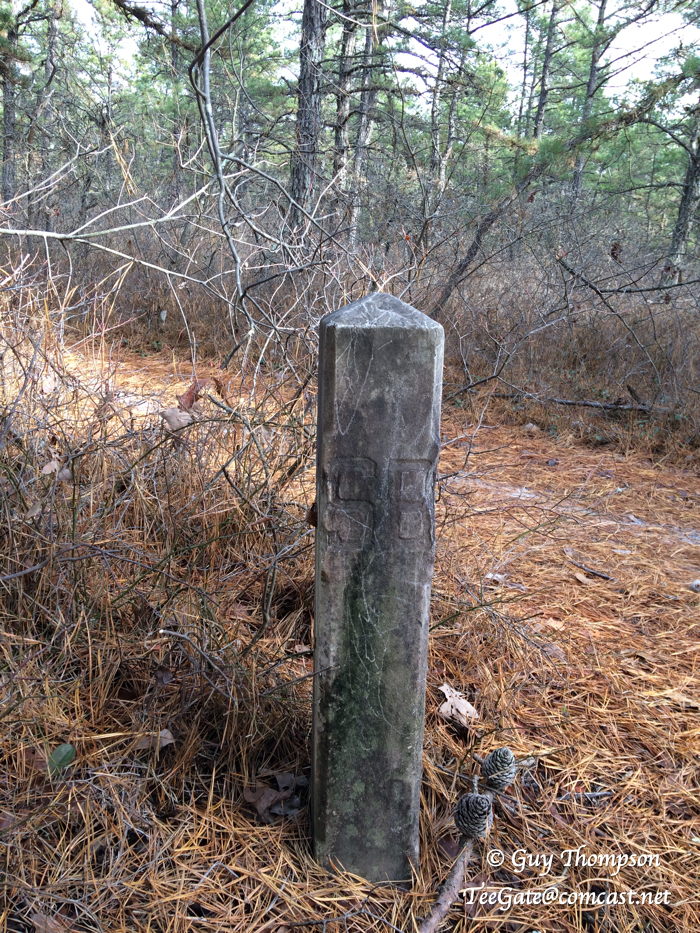 I also again visited the Lacey / Union Township line monument. Union was renamed Barnegat Township on 1/1/1997. Notice the "L" the"U" and the arrow. 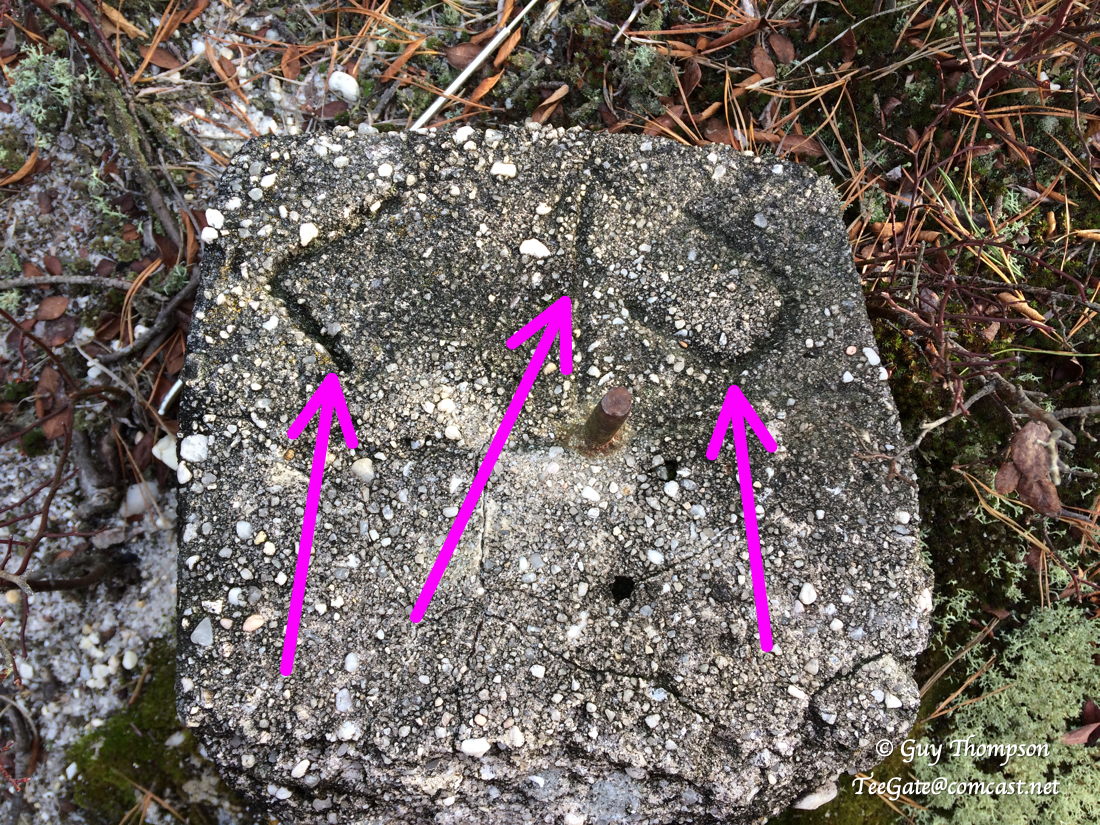 Today, both of us visited the same area looking for property stones and a second monument for the Barnegat Heights paper development mentioned last week. I had stuck out completely looking for stones in this area and was hoping to find at least one corner today. Walking a motorcycle trail we arrived at the first location and looking into the woods I could see a huge deer feeder right about where we wanted to go. Not wanting to annoy a hunter the day before the season starts we moved on to another area. This time after many failed searches we had success. Unfortunately, right now I don't know much about the history of this stone other than it has been there for a while. 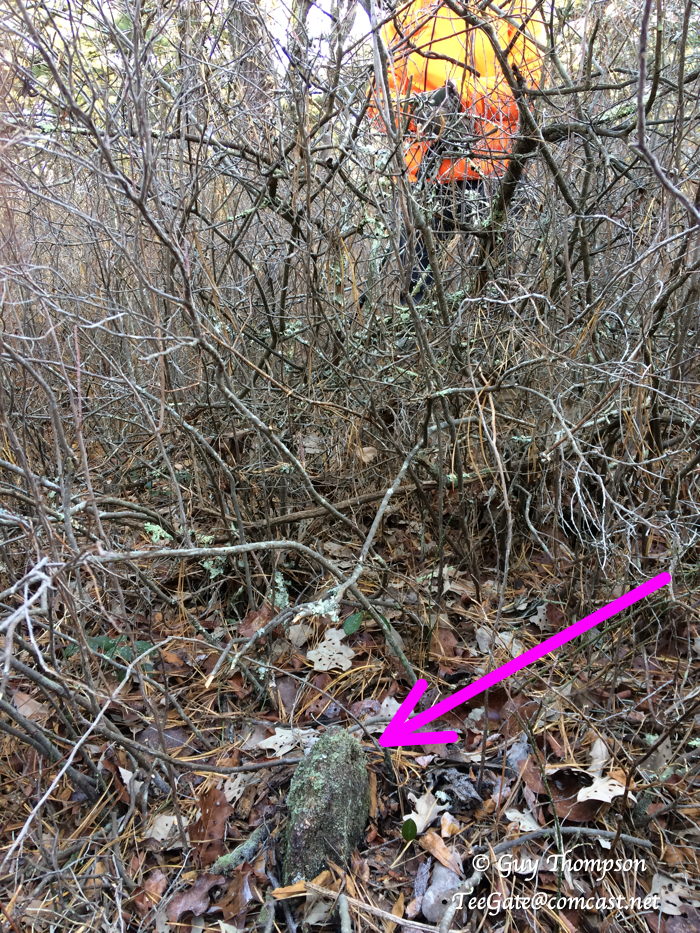 Then we started searching for the second Barnegat Heights corner. The woods were somewhat thicker there and we walked around in circles quite a bit. After having Lasik surgery for her eyes about 6 years ago, Jessica has been recently not seeing well. So now wearing glasses today for the first time since then, she became nauseous doing circles. I finished the duty and came up with the monument. And on our way home on Carranza Road by Seneca and the chemical company nearby, we noticed this Bald Eagle flying above. This photo taken from my dash cam. 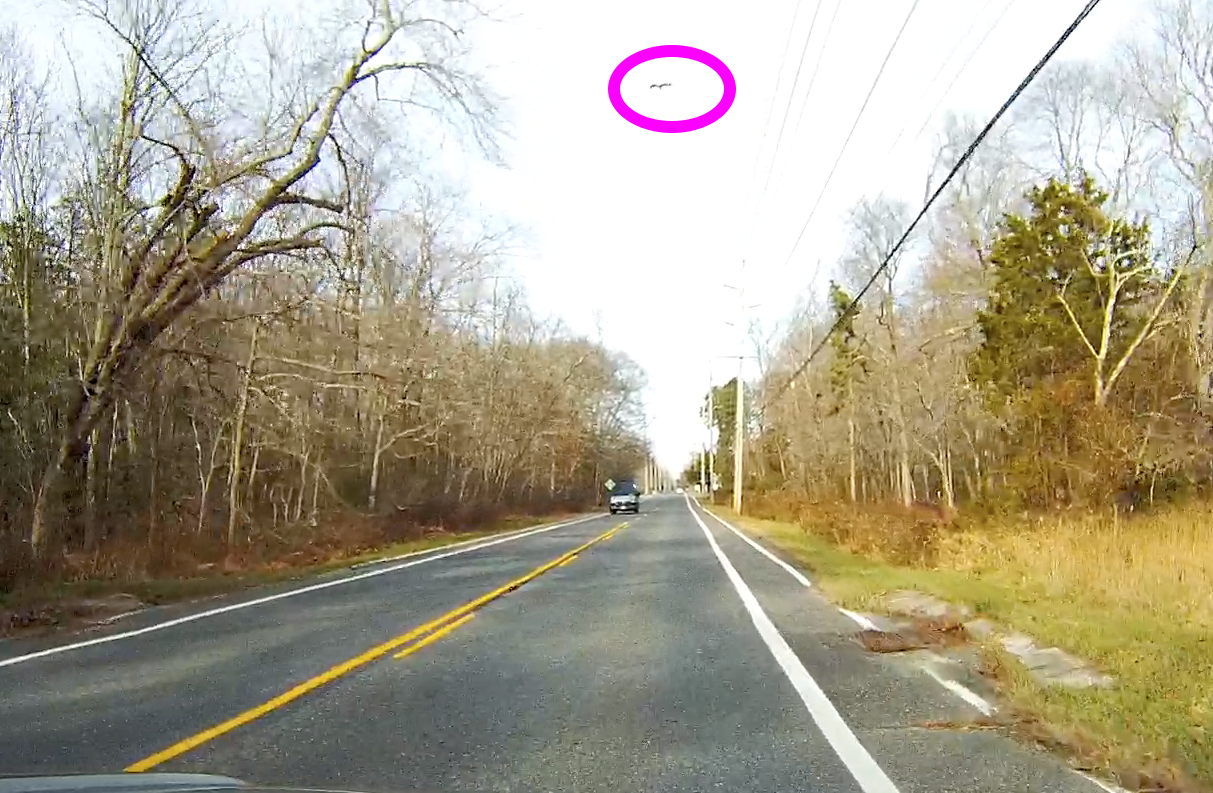 Saw this today in the Greenwood Forest. I stopped for one second and told Jessica we could leave the car there because we would only be in the woods about 100 feet and this came along.

I suspect this new sign means the Hub Cap place may be demolished. If you want photos get there now I would think. Taken from my dash cam. 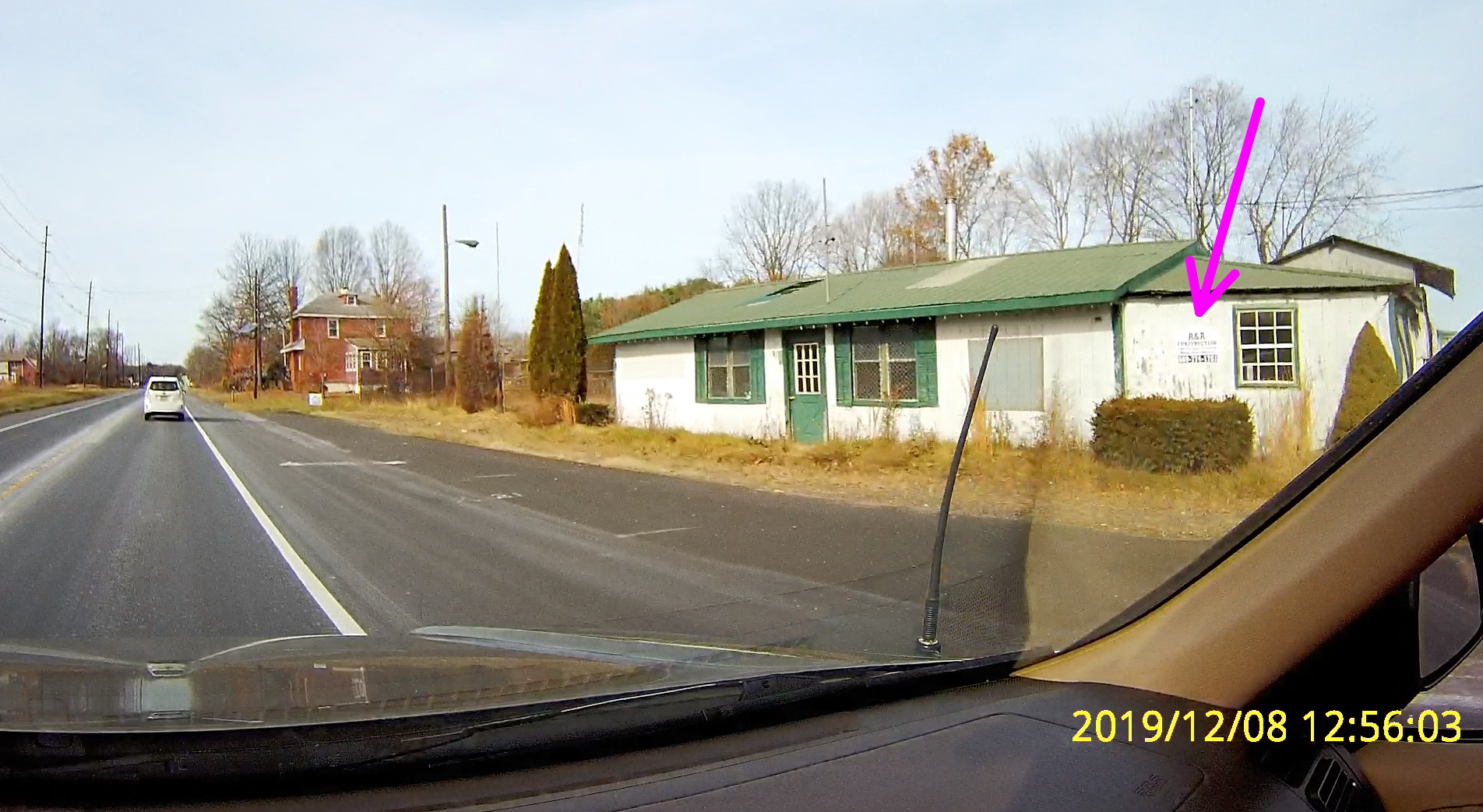 Teegate said:
Saw this today in the Greenwood Forest. I stopped for one second and told Jessica we could leave the car there because we would only be in the woods about 100 feet and this came along.

It should work now. Nothing special actually.

Youtube has new settings and I just did not do things correctly.

Teegate said:
I suspect this new sign means the Hub Cap place may be demolished. If you want photos get there now I would think. Taken from my dash cam.
Click to expand...

I remember a plan talked about 10(?) years ago to wildly develop the land north of 70 with shopping areas etc. I guess it was blocked.

Teegate said:
Saw this today in the Greenwood Forest. I stopped for one second and told Jessica we could leave the car there because we would only be in the woods about 100 feet and this came along.

Isn't that always the case, you stop blocking the road for a few seconds and.... yet if you pulled over initially you could be there for an hour or more before somebody comes through.

Odd seeing a SxS and a bike together but maybe adults in the SxS and a kid on the bike? A bike that is registered and the rider licensed is legal in Greenwood but the SxS or quads are not, even if hunting. Greenwood is seeing more activity in the last few years.

I am working on finding the "Two Stones" and the "Stone" shown on the below map. I found the Large White Stone a few years ago, also shown below. Notice it is in the "Webb State P. (Park) Webb Tract." This is the only map I have ever viewed that text. I have no information about it except this map. It is near Bullock and now part of the Greenwood Forest. It previously was owned by the Brooksbre Land Improvement company and also Harry L. Neil who owned much of Old Half Way and other area's around there. I believe Stanley Switlik eventually owned it and gave it to the state of NJ.

(Edit: I misread the Webb State Park. That is incorrect) 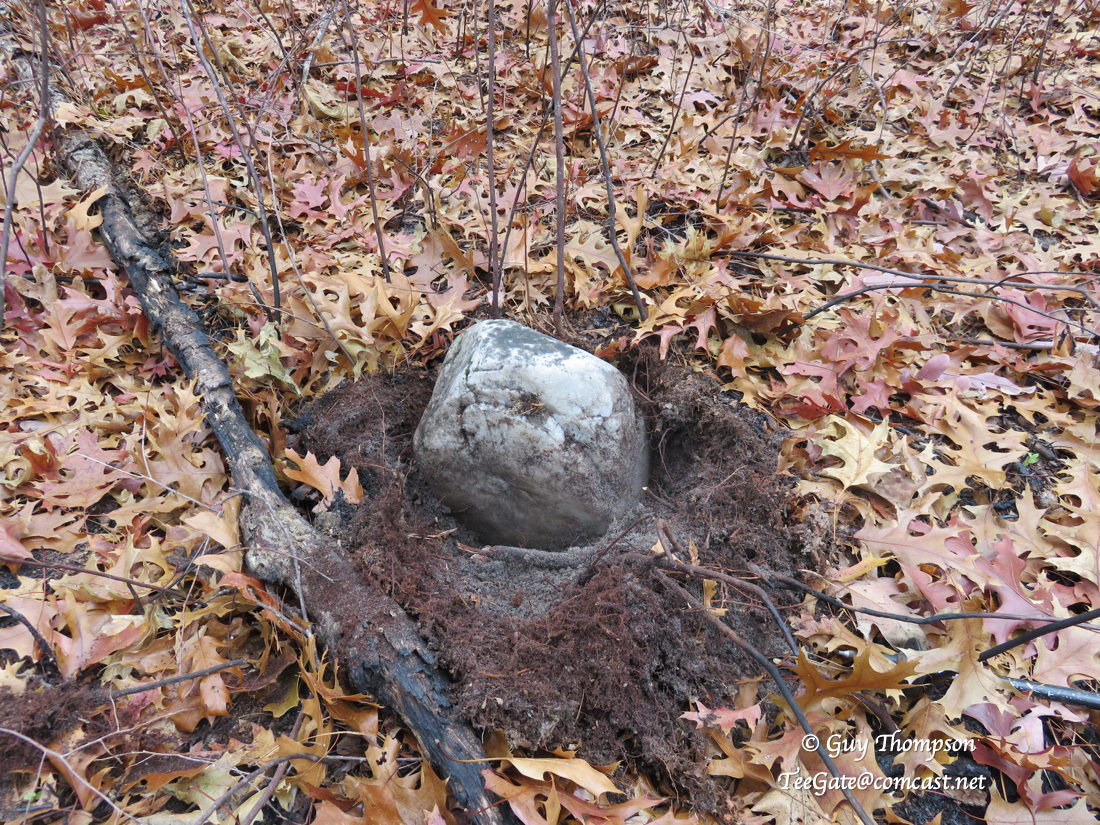 With Jessica not available today I went looking for the stones on the map below showing the mysterious Webb State Park. (Edit: Webb State Park is incorrect) 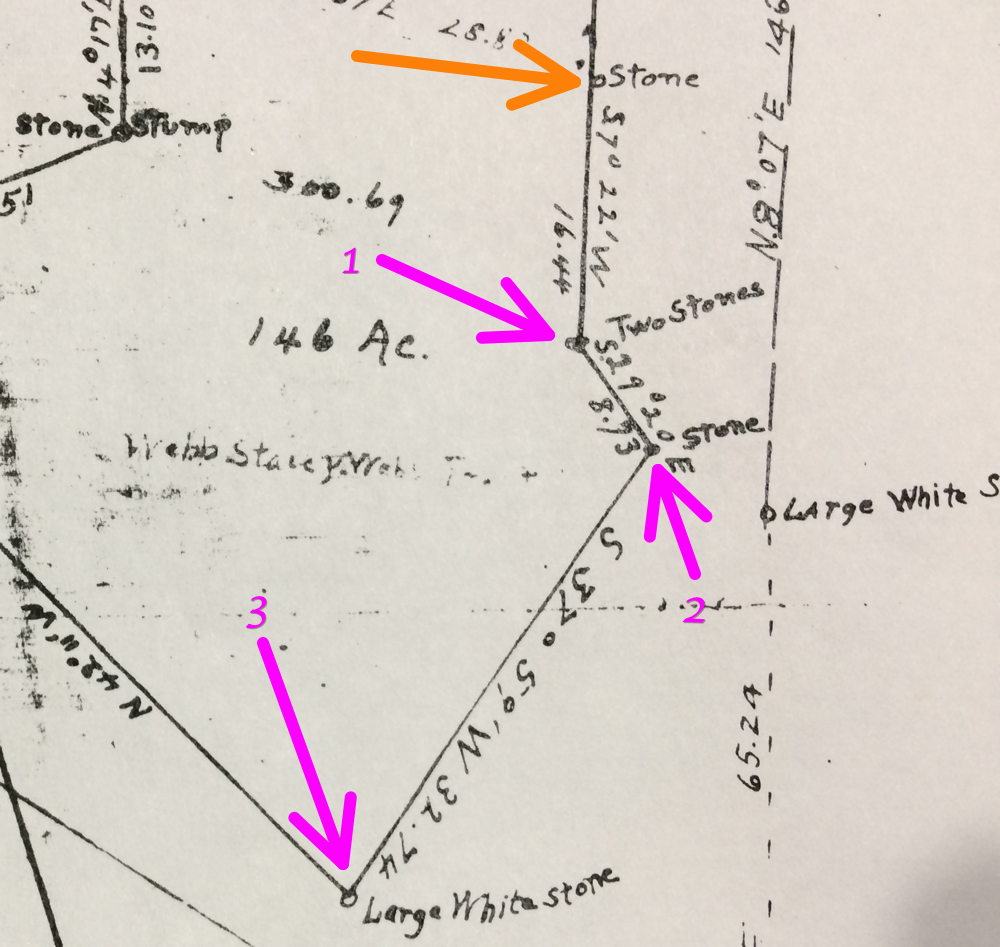 My first stop was at the two stone location marked as #1. I had calculated a distance using various degrees and started at my western location and headed east. In the middle was my nominal location and after I had walked long past that I began to get concerned. Reaching my eastern point I turned around and headed back and quickly saw this sticking out of the leaves. At this point I realized that when moving on to stone #2 on the map I had to make some angle and distance changes on the fly. So I headed in the direction I wanted to go and turned slightly more east than I had planned before. Looking up as I neared the location I was pleasantly surprised to see it right in front of me. The size of this stone was a surprise. I now had the location of two of the corners of the Webb State Park. (Edit: Webb State Park is incorrect) At this point I headed to the orange arrow on the map and after 15 minutes of looking I gave up. Something to look for at a later date. There actually are two more corners on the map that say"Large White Stone" on them, so I headed to a 4th location hoping to find one of the two. I drove a half mile, exited my vehicle and started walking towards where I felt it would be. About 100 feet before reaching my destination I stumbled on it. Now I knew a 3rd location. 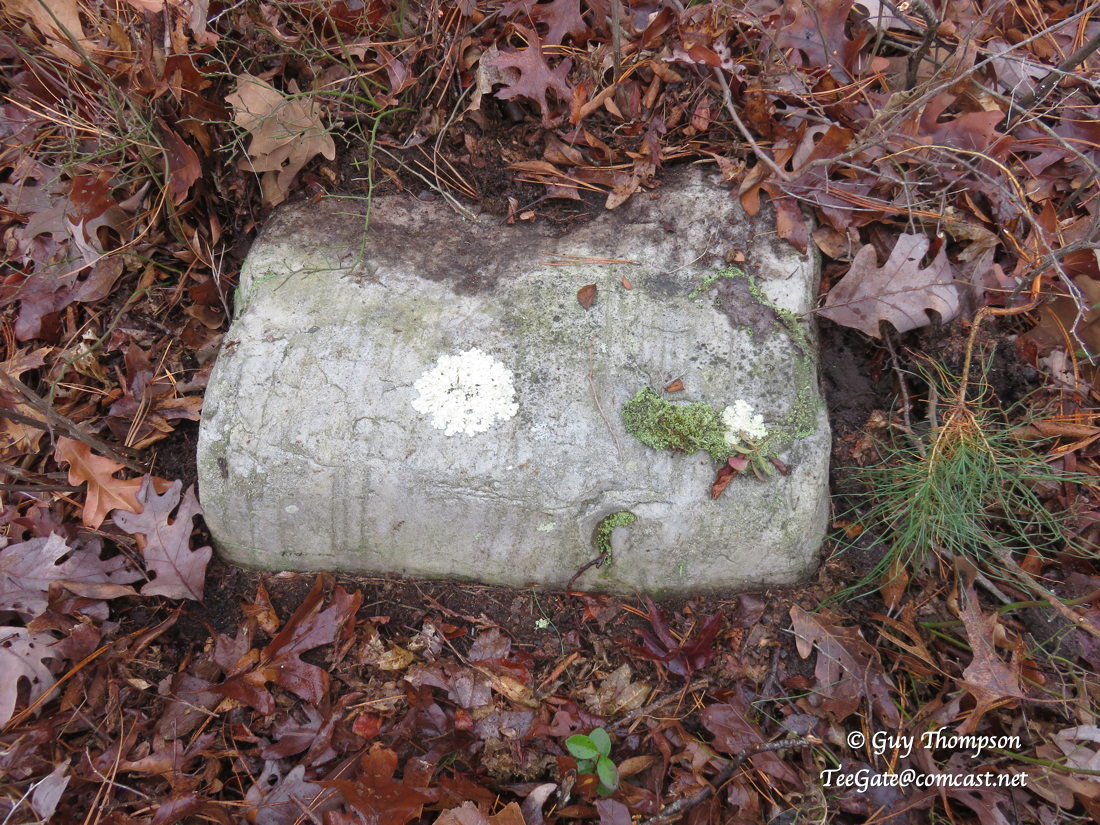 My next goal for the day was to find more of the Barnegat Estate corners along 72 between the county line and Stephenson Road. However, today I would be searching on the south side of 72. The first location was disappointing and I will go into more detail later why I believe it was not there. I then moved on to these two locations which as you can see are corners to the road that was planned for the development. The home owners could enter from the old Buddtown Road (Now 72) to access their property. The white arrows point to the road corners with the one on the left slightly deeper in the woods. Arriving there I found the corner on the right. 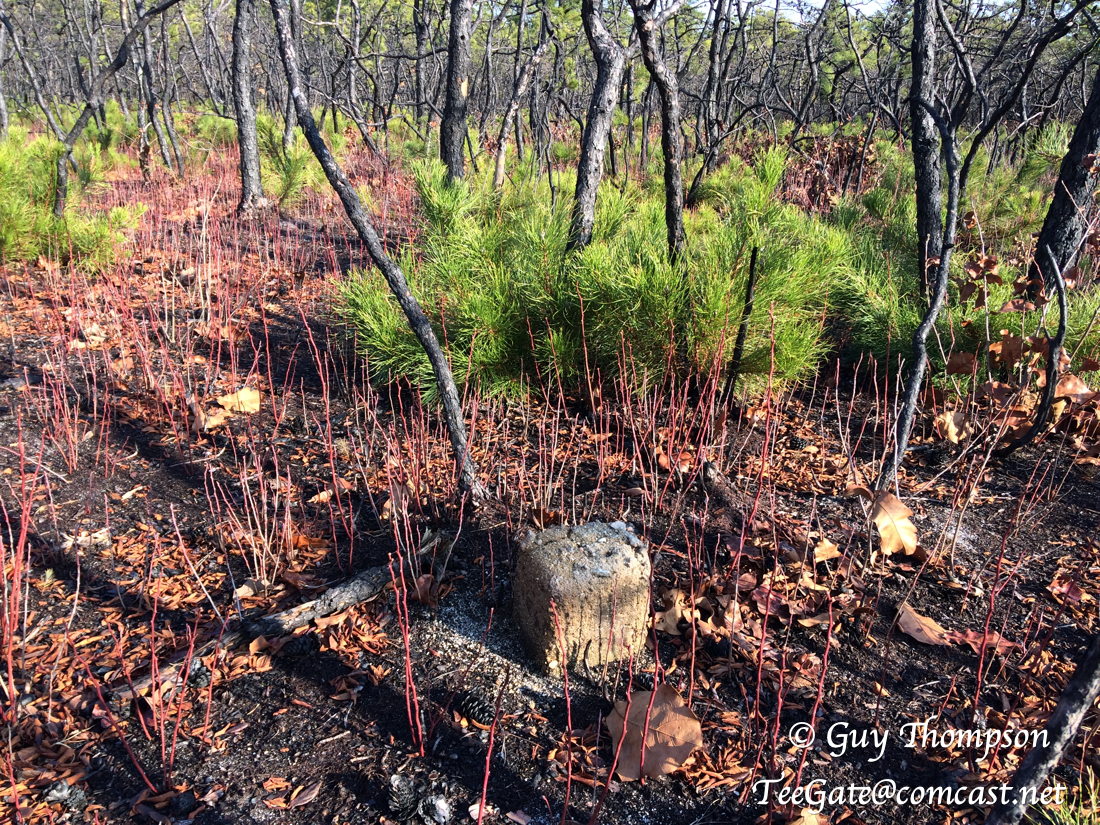 Standing at the monument I looked across the paper road and saw this one.

The arrow on the left. 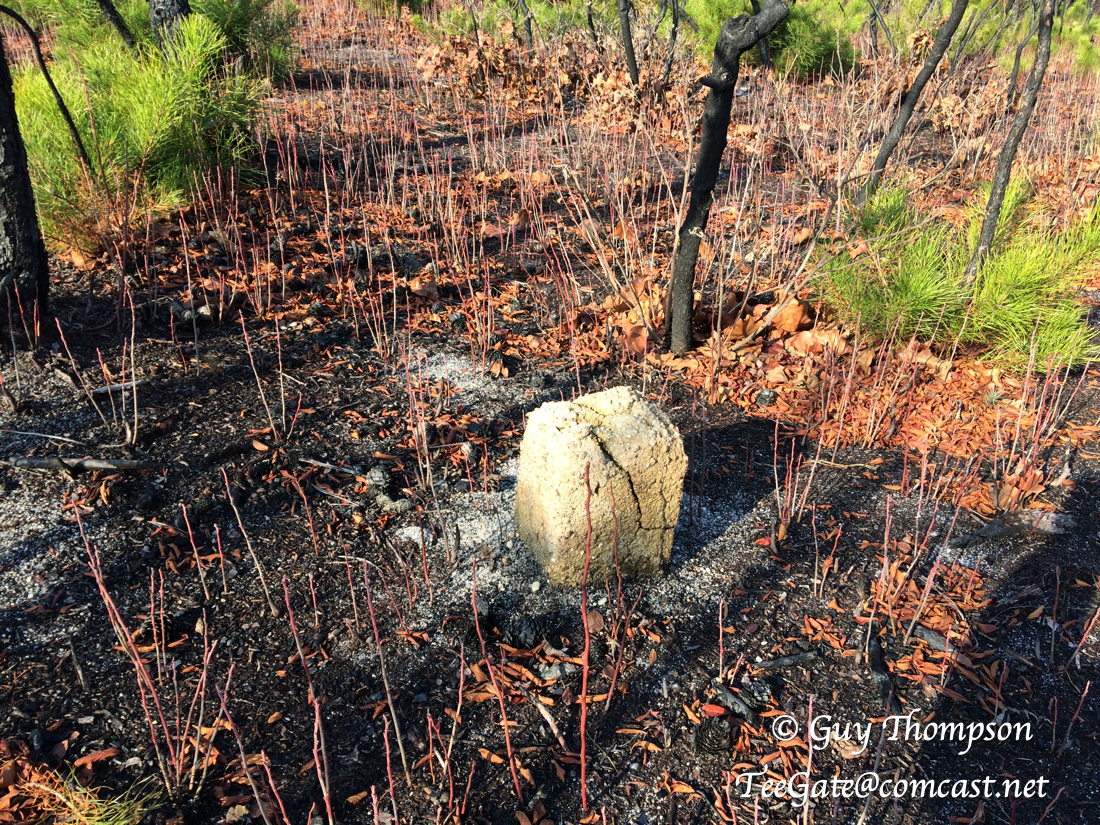 A video of me crossing the road

Appears the recent forest fire made your search a little easier.

I think I have a general idea of where you're searching for Webb state park. Unless you have a reason for keeping private, would you show on an aerial map? I have nothing to offer, just curious.

1Jerseydevil said:
Appears the recent forest fire made your search a little easier.

I think I have a general idea of where you're searching for Webb state park. Unless you have a reason for keeping private, would you show on an aerial map? I have nothing to offer, just curious.
Click to expand...

I am not going to say where it is. I don't want to be responsible for the stones going AWOL.
Reactions: manumuskin

1Jerseydevil said:
Appears the recent forest fire made your search a little easier.
Click to expand...

I have to finish this before spring.

I was looking over my map again and I may be reading it wrong. This may not say "Webb State P." It may, just maybe, say "Webb Stacey. Webb Tract."

It's just too hard to figure out. It's the garbled stuff on either side of the dot that confuses me.