I was looking over a map from the early years of Lebanon and there was a symbol on it which the map says designated a building. So I went there this morning to look the area over and found two open clearings with evidence of an old road leading to them but it was absent of any evidence that there was a building there in the past. It was either completely removed or it was all wood.

The map showing the building location. The 1931 HistoricalAerial showing a building(s).

That Shinn's Branch is known for good water and good cedars in there. Maybe they were starting to cut and the state bought it and burned the logging buildings down. Shinn's Branch is mentioned in the below link. I crossed that bridge over Shinn's Branch many times in my teens on the way towards Pakim Pond. 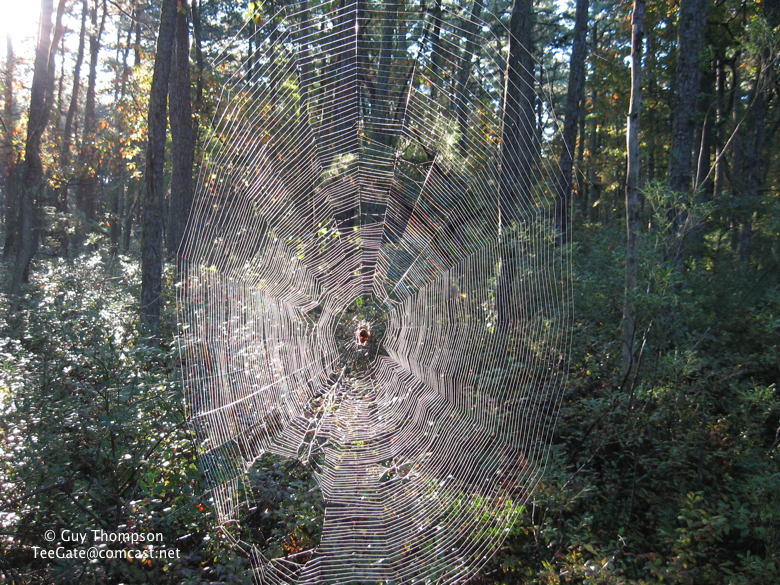 Last week I discovered NJ49 not far off the Batona Trail near the Lebanon ranger station. No longer a Lebanon boundary it was one of the original boundaries none the less. Yesterday, Jessica and I discovered NJ84 and was surprised to find an incised stone along with it. It appears to me to be either 1B or 18 unless the first letter is an L. This morning my wife decided to come with me so we stopped into McDonalds early for a drink and a small bite to eat and then headed to Lebanon. I had to plan this one around her staying on the road so I decided to go back and look at a few places that have frustrated me. One location was NJ44.3 which I mentioned before must have been used for the surveyors to get their bearings. I have looked for this for months with no success. While my wife was stood at the car keeping me in alignment, and while she figured out how to get her email working on her phone, I systamatecally walked the line on both sides of the road. After giving up again I turned back to look one more time and my walking stick struck something hard. Next, I again looked for NJ 44.4 near the campground at the glassworks. The campers were mostly up by the time we passed by and my wife mentioned she could never do that

Anyway, I did find a monument on the line close to where 44.4 should have been, but I am uncertain as of yet what this really is for. And just before we left at 9AM we found NJ9A and a stone off of Pea Pod Road. Again, one of the original monuments for Lebanon. I was able to see the survey line on the 1931 aerials making this one fairly easy to find. It is so close to the road my wife was able to walk around all of the brush and get to it without fear of bugs. Your doing very well for it being summer.I don't believe in luck.The one you hit with your stick either wanted to be found or your stick has figured out what it is you want and found it for you.

manumuskin said:
Your doing very well for it being summer.I don't believe in luck.The one you hit with your stick either wanted to be found or your stick has figured out what it is you want and found it for you.
Click to expand...

I am getting a really good handle on the survey of Lebanon. The toughest part will be many of the exceptions all over the place. There are hundreds of things to find with quite a few of them stones. By the time you are able to go I am hoping I have found a few of the monuments of some of the exceptions so that both you and I can calculate where the the rest should be. So far I have been concentrating on the original Lebanon, but now that the vegetation is thinning I will be switching to others which should get us some nice incised stones. On one map it is obvious that someone went out in the 1970s and looked for some of them. I am impressed on how well they did. They have the dates written on the map with the dates they found them. With two of them I decided a few months back to just go look for them without calculating anything and I came up empty. Since then I have narrowed them down and you and I can give it a shot. They should be easy to find.

There is one over near Buckingham that is quite remote that we may have a challenge with. The woods there look unforgiving.


So get those feet up to par and we can resume our conversations while we enjoy the search. I hope to see you and your female sidekick in the winter.

good news and bad news.good news is my feet have quit hurting and I don't have to get an operation.bad news is I"m not going to have all winter off.More good news is my first sunday off is october 12.nov 1 is my first full weekend but I leave for vacation last two weeks of november so from october 12 till the first weekend in november I have days off.If the hunting is good I"ll come out on some of my hoot owl 12 am to 8 am shifts because I can get up there by 930 hunt a few hours and then come home and sleep on the weekends but my feet should be fine so you won't have to here me whine this year

Okay. Well, keep me informed by email when you are available. I have as of now 2 1/2 days vacation I have to take by November 15.

I better get working on trying to find one monument in that area so we have a place to start from.

Jessica ordered new boots and they should be here soon. She has such a hard time finding boots to fit her small size but still be high enough to be of any use.

I think early november I"m having weekends off but maybe in october I"ll still be getting off sunday and mondays if you want to take a couple mondays I"ll be off.I don't get up into Lebanon a lot so I"ll have to dig into the maps to orient myself.I get out east of there east of Woodmansie more often.

Jessica and I were out in the rain yesterday walking along the Division line for the Hanover Furnace property and it is obvious the military bulldozed many of the pipes that were used on the line to delineate it. The state has owned the property since the 70s when the Feds gave it to them even though it is obvious the Feds have surveyed it again recently. That really does seem ominous since a few of the roads there have been recently semi blocked.

The Division Line the state has owned since the 70s.


This morning we went to another location along the line on the other side of route 70 where a pipe should have been and could also not find that one. So we gave up and traveled to Dry Pond Road near Lebanon Glass Works to look for two monuments I have been trying to find. This week I was looking over HistoricAerials and noticed I had been looking in the wrong spot again because Dry Pond Road was moved sometime after 1932 and before 1940. The location I was looking for was said to be "in the road." So we went to my calculated location and came up empty, and then moved on to our next location close by. After a short search I found a stone and state monument about 60 feet from where I had it placed at. This was a corner stone to the J. J. White property and Hanover Farms and is considered NJ102 by the state.


Map showing the old Dry Pond Road and the monument along the very edge of the road. The 102 location is 182 feet away. So since I knew 101 was 182 feet away according to the notes I have, I took a GPS reading of where I was and headed back in the direction we came from. I was actually able to find the abandoned road from 75 years ago, and by keeping my GPS set at 182 feet while walking I stumbled onto a very nice large stone. If you study the roads in Lebanon using HistoricAerials and use the slide feature to compare them, you will see that the CCC did a massive amount of road work there from 1931 to 1940. Many of the roads were moved, extended or altered is some way. Unfortunately, they have destroyed a few things I have been looking for.

This was called Three Mile Bridge but you won't find a bridge there now.

Trivia: (Just asking to see if it is common knowledge or not) What was the name of the lake before it was Presidential Lakes?

Teegate said:
Trivia: (Just asking to see if it is common knowledge or not) What was the name of the lake before it was Presidential Lakes?
Click to expand...

Without internet searching, would it be upper mill lake?

I think I remember the lakes were named Lake Madison and Jefferson, or some other presidents.

bobpbx said:
Without internet searching, would it be upper mill lake?

I think I remember the lakes were named Lake Madison and Jefferson, or some other presidents.
Click to expand...

Without looking either I believe that Bob is correct. Upper Mill Lake.

Jefferson is correct. At least the portion on the north side of 70. Well done Bob! I will post more later.

I am always amazed at how the state will spend money to have their land surveyed and a few years later will send some nitwit out with a bulldozer to rip all the monumentation they paid to have put in a few years before??? I guess I"m just dense.

By the way nice work Guy!