Bamber got soaked last night. Heavy, heavy rain. Pumps on overtime in the basement. I'd like to see a total rain scorecard.

It was really pounding down here last night, lots of wind too. About 3 inches of rain here, they only forecast one inch. The NWS updates their precipation website sometime around noon IIRC.

Manasquan and Metedeconk rivers are approaching flood stage. 3+ inches overnight. Northern Ocean county has flood warnings. At least all of the leaves that were due to fall are finally down.

bobpbx said:
Bamber got soaked last night. Heavy, heavy rain. Pumps on overtime in the basement. I'd like to see a total rain scorecard.
Click to expand... 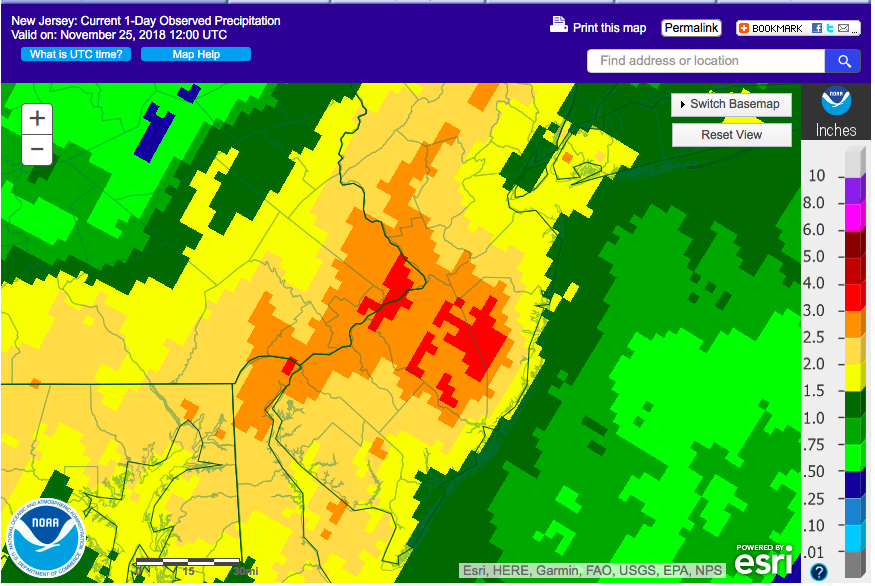 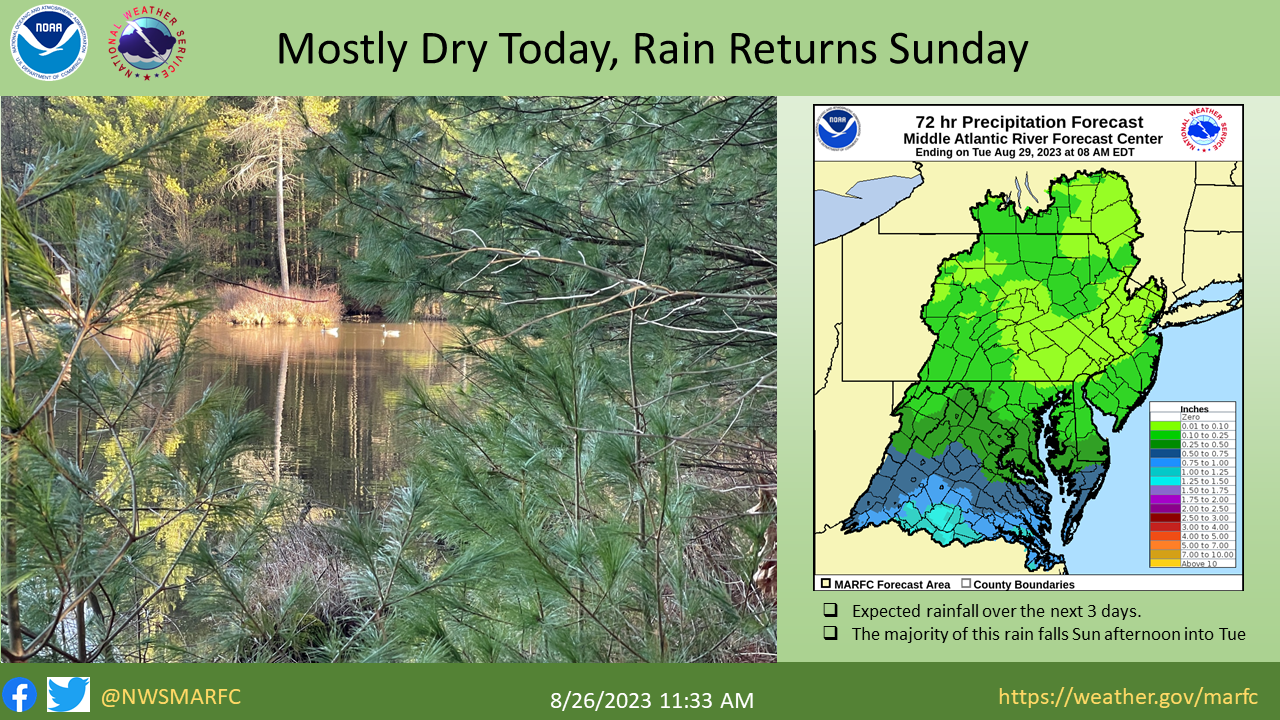 The National Weather Service in Mount Holly has issued a

* Moderate to heavy rain will move through the watch area Monday
through Monday evening. Areas within the watch received 3 to 4
inches of rain Saturday night into Sunday and area creeks,
streams, and rivers are all running high. Additional, heavy
rainfall may result in more flooding across the watch area.

A Flood Watch means there is a potential for flooding based on
current forecasts.

You should monitor later forecasts and be alert for possible
Flood Warnings. Those living in areas prone to flooding should be
prepared to take action should flooding develop.

Standing water in my backyard and the five other lots I can see from my deck :-(
T

Some serious water levels out there. I'll be fishin' on the street soon
T

bobpbx said:
Bamber got soaked last night. Heavy, heavy rain. Pumps on overtime in the basement. I'd like to see a total rain scorecard.
Click to expand...

Now over 8' Nearing some all time levels 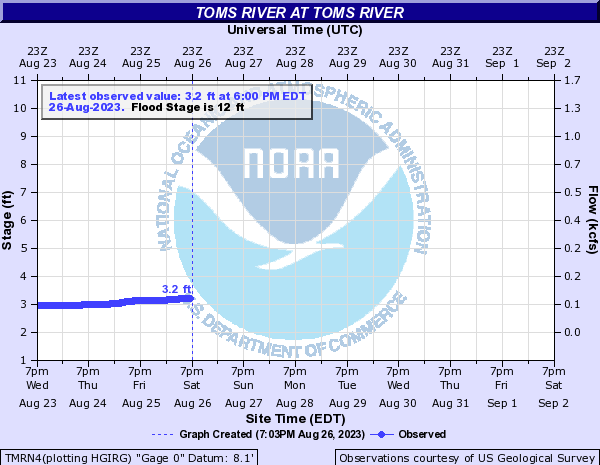 They have increased the snow forecast for today. Nothing happening here yet though.
___________
A chance of snow showers. Mostly cloudy, with a high near 38. North wind 5 to 7 mph. Chance of precipitation is 50%. Total daytime snow accumulation of 1 to 2 inches possible.

Accumulating snow is possible from mid morning through late this
afternoon across portions of southern New Jersey. At this time,
the main impacts are expected to be along a narrow band in
southeastern Burlington and southern Ocean Counties. However, a
small shift in where this band develops could increase the impacts
and snow amounts further south and west. Therefore, there is a
potential for accumulating snow in Atlantic, Camden and
northwestern Burlington Counties.

Impacts and snow amounts could vary greatly over short distances.
If driving within these areas today, please exercise caution for
rapidly changing conditions. Slippery road conditions are
possible. In bands of heavier snow, visibilities could be reduced
as well.

Just measured four inches out in my yard - everything is white outside. Quite a change from the half inch in the forecast last night. Has stopped for the time being, but it's still swirling around offshore and hard to tell if more is still to come. 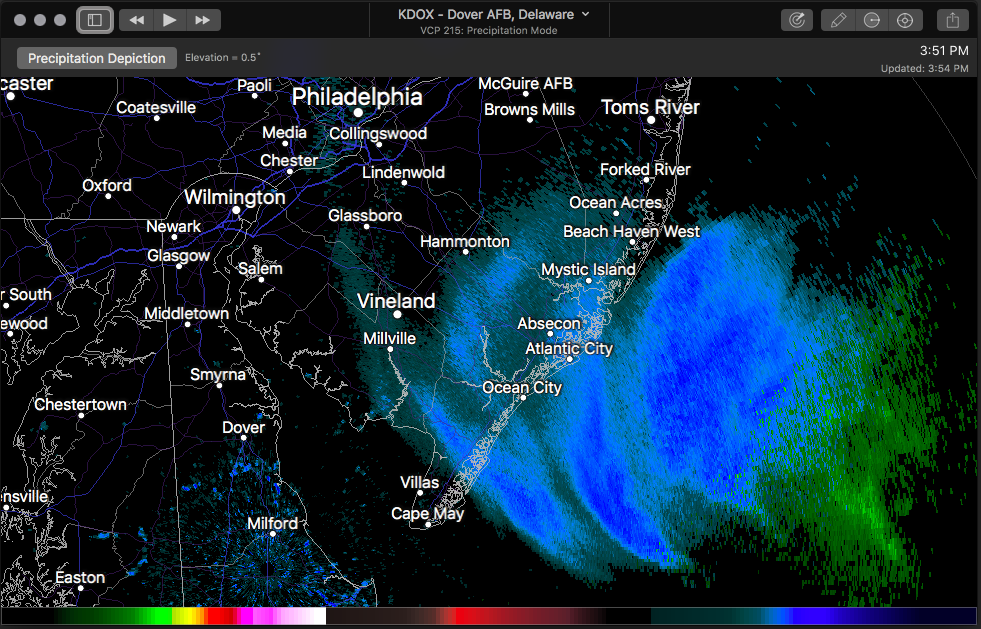 Out and about today had snow from Forked River south, heavy at times. Here we had a couple of bursts, but nothing to write about.

This image shows water as opposed to snow totals, but the heaviest snow was mostly in Atlantic County. 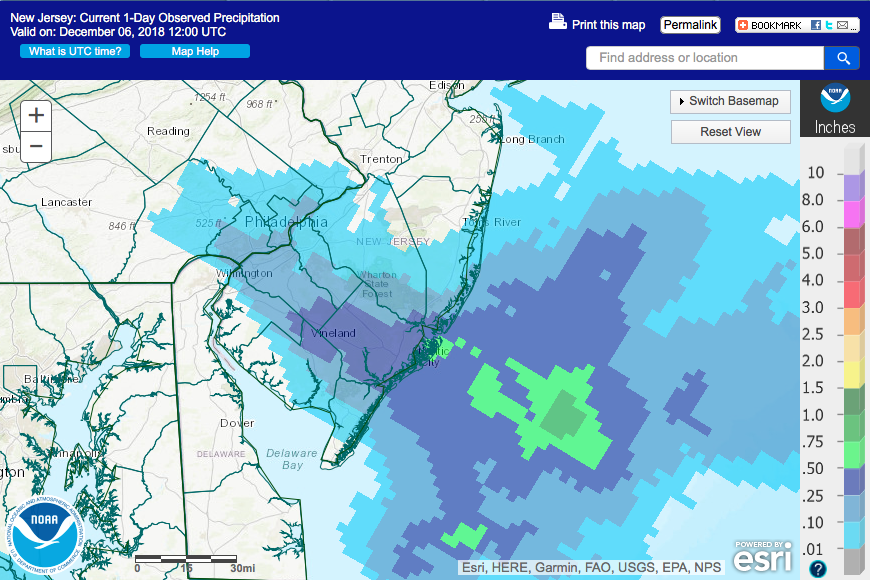 Here comes the rain again, just in time for the weekend....

Tonight
New precipitation amounts between a half and three quarters of an inch possible.

Saturday
New precipitation amounts between a half and three quarters of an inch possible.

Saturday Night
New precipitation amounts between a quarter and half of an inch possible.

Sunday
New precipitation amounts between a quarter and half of an inch possible.

Yea, looks like a washout this weekend. Places I want to get to are flooded already.

Like a mini nor' easter the way it's running counterclockwise.