Mystic Islands yesterday afternoon.
I was taste testing beers all day on the bulkhead but I was forced to move inside 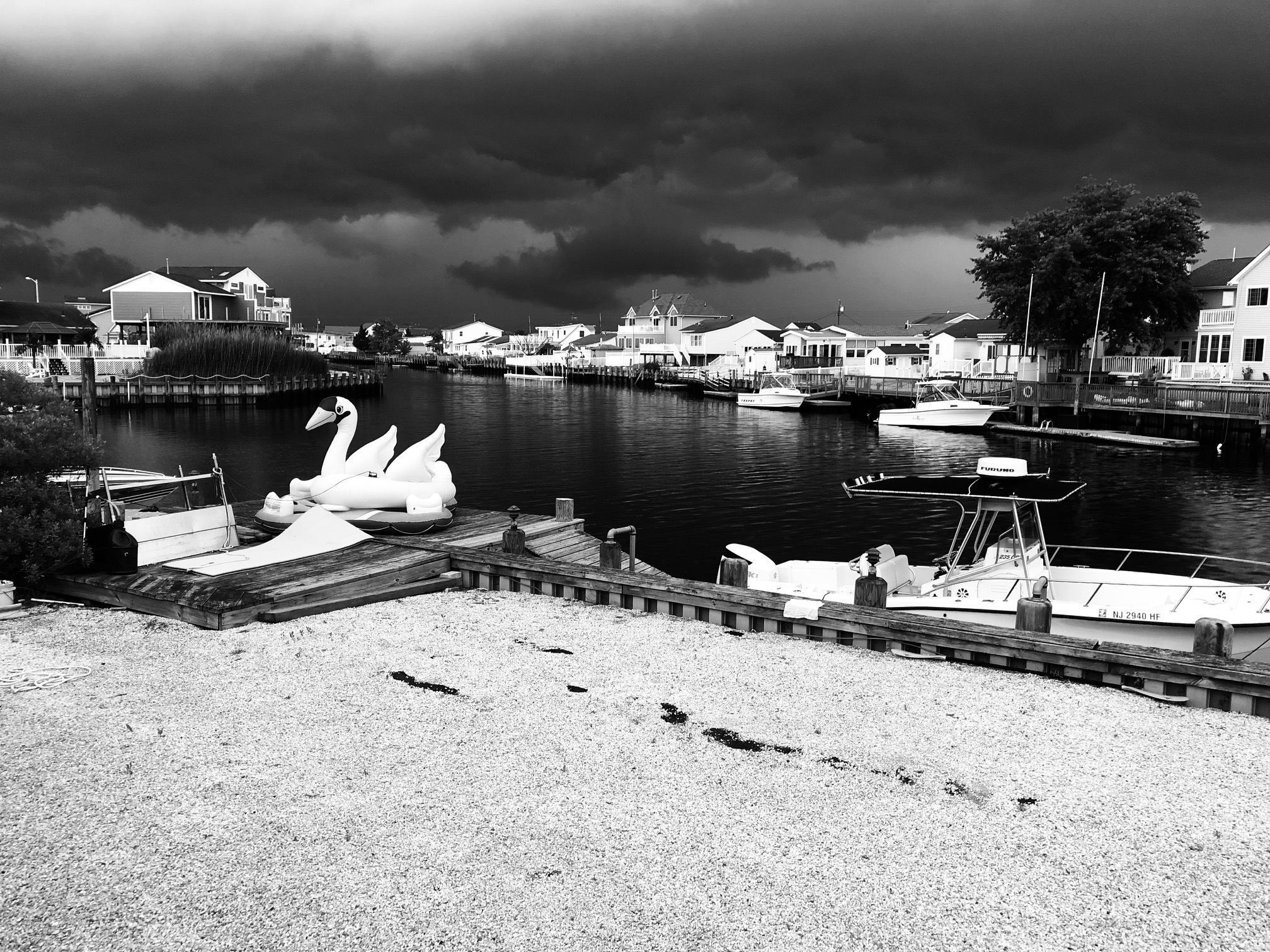 Got about an inch here. Quite a wet week - I'm in the fringe of the red "hot spot" South of Vineland, this map shows 7-day rainfall totals. 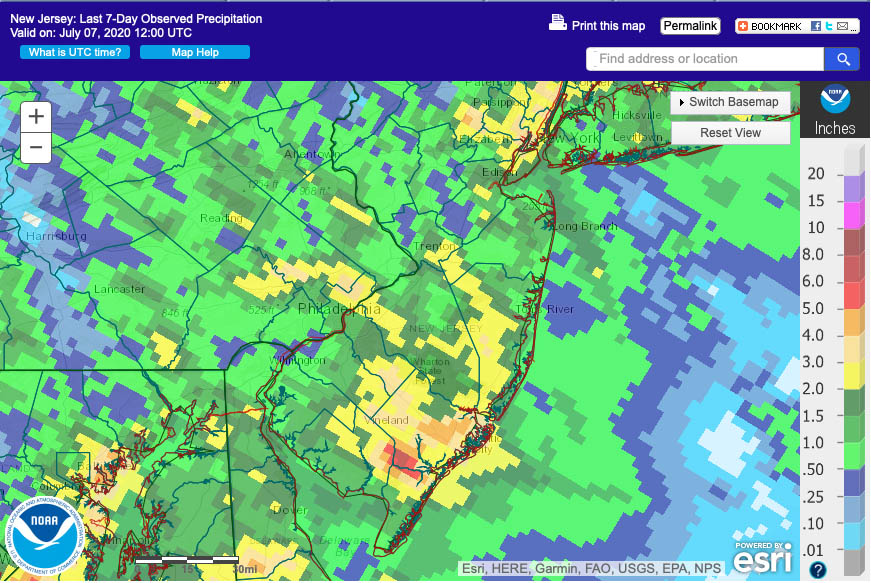 Tonight
New precipitation amounts between a half and three quarters of an inch possible.

Friday Night
New precipitation amounts between a quarter and half of an inch possible.

Well, we need it or at least some of us do. It actually was raining for a minute here this morning.
Last edited: Jul 9, 2020

Careful what you wish for. 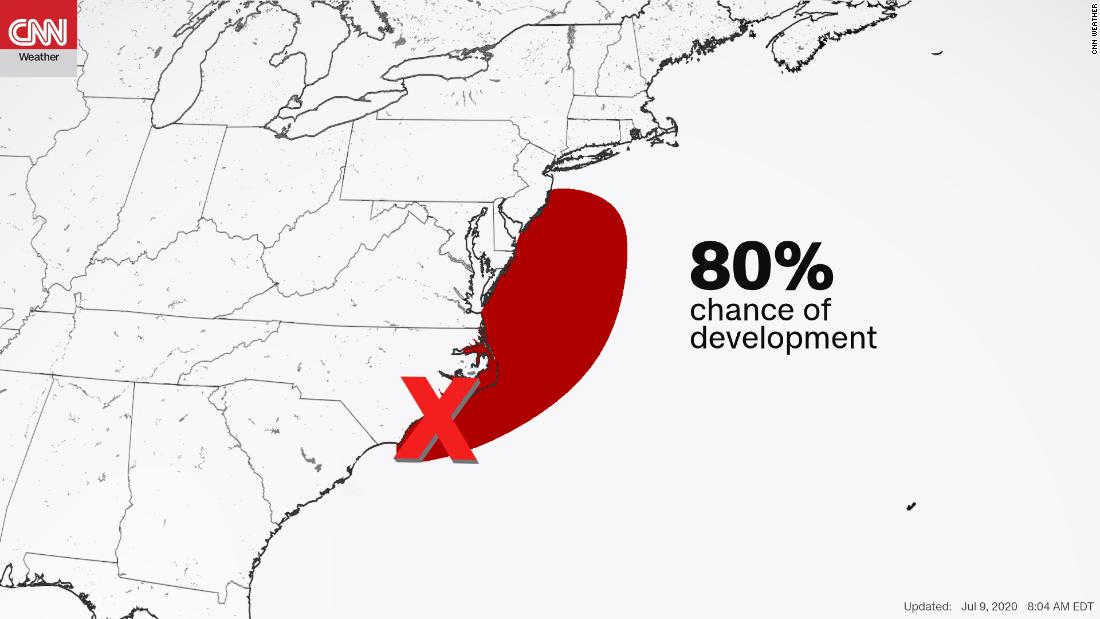 If the weather system meandering through the Southeast develops, it will become Tropical Storm Fay, the sixth named system of the Atlantic hurricane season.

This forecast shows Delaware and Southern NJ as getting the heaviest rain from the storm.
(sorry, couldn't find a higher resolution version). 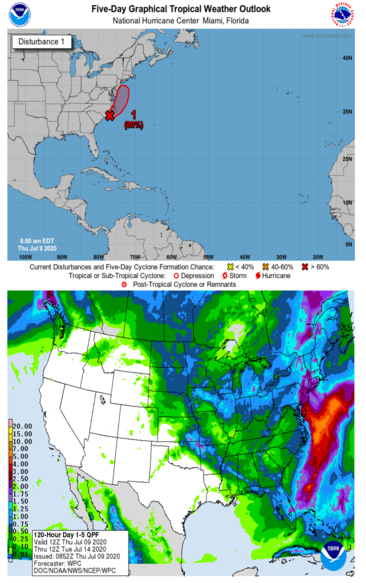 Should be an interesting day.

Just went to Turnersville and back. 42 was semi flooded on the edges and I was driving blind a few times. Less traffic coming home and raining harder.

* CHANGES TO WATCHES AND WARNINGS:
- None

Tropical Storm Fay is currently centered east of Fenwick Island, and
will continue to track to the north over New Jersey today. Heavy rain
will lead to flash flooding, mainly across Delaware and New Jersey, but
flash flooding will also occur over southeast Pennsylvania. The threat
for tropical storm force winds will mainly occur along the New Jersey
and Delaware coasts. Isolated tornadoes are also possible, especially
in eastern New Jersey. Tropical Storm Fay will depart this evening,
with impacts diminishing late tonight.

* WIND:
Potential impacts from the main wind event are now unfolding across
coastal New Jersey and Delaware. Remain well sheltered from dangerous
wind having additional limited impacts. If realized, these impacts
include:
- Some damage to roofing and siding materials, along with damage
to porches, awnings, carports, and sheds. A few buildings
experiencing window, door, and garage door failures. Mobile
homes damaged, especially if unanchored. Unsecured lightweight
objects become dangerous projectiles.
- Several large trees snapped or uprooted, but with greater
numbers in places where trees are shallow rooted. Several
fences and roadway signs blown over.
- Some roads impassable from large debris, and more within urban
or heavily wooded places. A few bridges, causeways, and access
routes impassable.
- Scattered power and communications outages, but more prevalent
in areas with above ground lines.

* TORNADOES:
Potential impacts from tornadoes are still unfolding across coastal
New Jersey. Remain well braced against a tornado event having possible
limited impacts. If realized, these impacts include:
- The occurrence of isolated tornadoes can hinder the execution
of emergency plans during tropical events.
- A few places may experience tornado damage, along with power
and communications disruptions.
- Locations could realize roofs peeled off buildings, chimneys
toppled, mobile homes pushed off foundations or overturned,
large tree tops and branches snapped off, shallow-rooted trees
knocked over, moving vehicles blown off roads, and small boats
pulled from moorings.

Elsewhere across NEW JERSEY...DELAWARE...SOUTHEASTERN PENNSYLVANIA
AND NORTHEAST MARYLAND, little to no impact is anticipated.

Rapidly rising flood waters are deadly. If you are in a flood-prone
area, consider moving to higher ground. Never drive through a flooded
roadway. Remember, turn around don`t drown!

If a Tornado Warning is issued for your area, be ready to shelter
quickly, preferably away from windows and in an interior room not
prone to flooding. If driving, scan the roadside for quick shelter
options.

Closely monitor weather.gov, NOAA Weather radio or local news outlets
for official storm information. Be ready to adapt to possible changes
to the forecast. Ensure you have multiple ways to receive weather
warnings.

Do not be a thrill seeker or risk your life for senseless photos or
videos.

Do not be a thrill seeker or risk your life for senseless photos or
videos.
Reactions: Boyd

You need a new keyboard

I see "this is what my keyboard is doing right now."
Reactions: bobpbx

The sun just came out here!

The dewpoint here is 75 degrees. That is listed as "extremely uncomfortable, fairly oppressive". They are so right.

If it goes to 80 it's deadly for asthma related illnesses.

Here's an updated version of the 7-day rain totals. Just about everywhere got at least 3" over the past week. I got almost 4 inches yesterday. 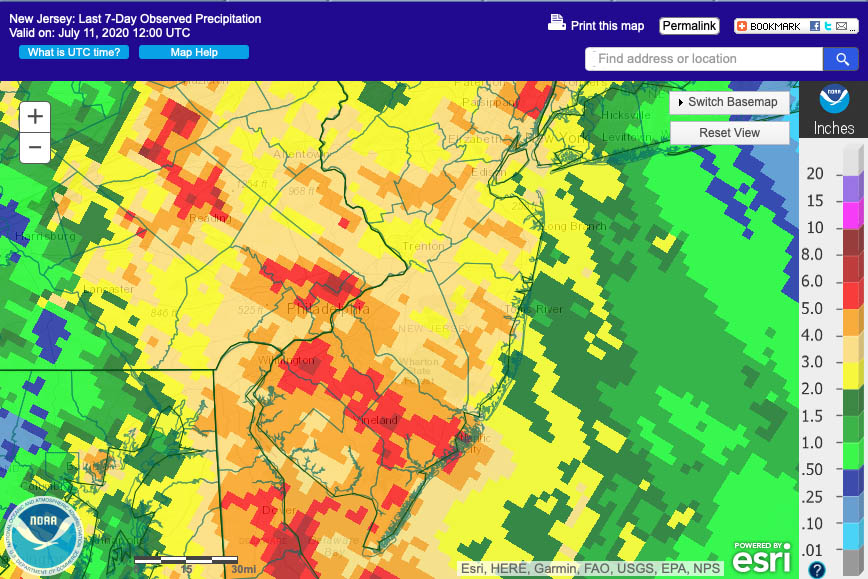