pinelandpaddler said:
The scroll bars on the interior of that large oxbow are very apparent.
Click to expand...

Can you explain that?

I guess some of this is just in my blood.... my mother was an artist, but when the war began she became a draftsman (draftsperson?) at Curtis Aircraft. That's where she met my father, who was an engineer and subsequently was sent to Guam to maintain airplanes in the Navy. I still have one of my mother's airplane drawings framed on the wall. It was surprising to me, since during my lifetime it was hard to imagine her ever doing anything that technical and nerdy, LOL!

When I was home from school sometime around 1970, my dad was the Chief Design Engineer at McDonnell-Douglas and took me into his office on a weekend morning when it was empty. He had one of his people demonstrate their IBM CAD system, which was probably the most advanced in the country (if not the world) at that time. It had a huge CRT screen and they used a light pen to select and draw. The technology was very different then, it was vector graphics, unlike today's raster graphics. With the vector system, there was a "display file" which was a list of all the points in the drawing. The computer endlessly cycled through that list and re-drew every line once a second. The screen used a special long-persistence phosphor, so that the lines would keep glowing while they were being re-drawn, but you could still see some flicker. This is similar to the way analog radar screens worked.

Anyway, it just blew me away at the time. The system was also linked to computer-machining equipment, so parts could be directly built from the drawings. And another important feature was that it could calculate the optimal routing for the hundreds of thousands of wires and tubes through all the bulkheads in an airplane.

But that terminal was just the tip of the iceberg, there was a big computing center in a building across the campus that did the real work. Out front they had some impressive fountains. These were actually part of the cooling system for the computers! I remember thinking that ordinary people would never have access to anything like this. But in reality, it started happening within ten years with the introduction of the IBM PC and Apple ][ computers in the late 70's!
Last edited: Apr 5, 2020
Reactions: bobpbx and old jersey girl

Boyd said:
Can you explain that?
Click to expand...

Boyd, this video shows how it works. I'd highly recommend muting the music.

Scroll bars are a product of meander migration. As the river migrates in the direction of the outside of the bend, the point bars on the inside of the bend are left in place. Eventually, a sequence of point bar remnants is formed as the river meander continues to grow.

Take a look at some examples: 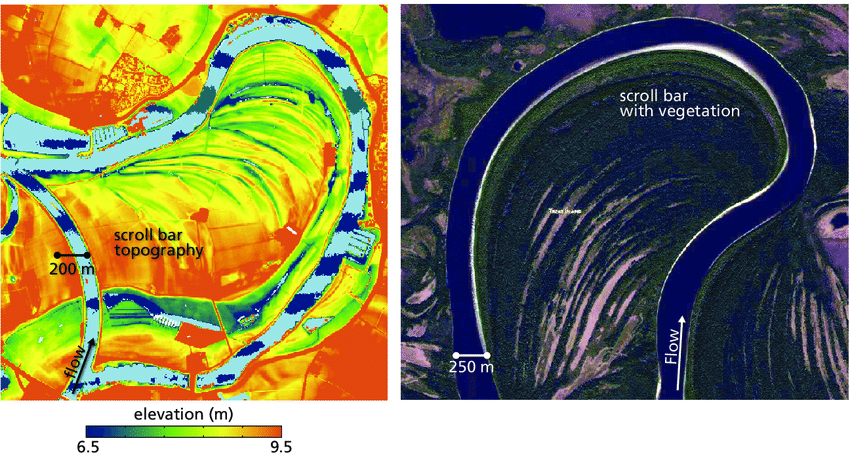 i have seen cloud obscured areas on GE and thats why I assumed all aerials were by satellite.16,000 ft would almost graze some of the Rockies.I assume aerials are done at greater heigths there? In Alaska 16000 ft would not even cut it in some areas

Your parents are impressive Boyd. That kind of equipment was very advanced stuff for that time period. I remember when I was Division Head of the inspection department, I purchased a coordinate axis (XYZ) measuring machine for the crew. Cost about $115K at that time (1989). The guys loved it.
Reactions: Boyd

Was your dad also a fighter pilot, and did he do work on the F-16? John Boyd?

No, my dad had a beat up old plane before the war, but did not fly much after that. Am looking at his resume here... Curtiss-Wright from 1942-44, then US Navy on Guam doing aircraft maintenance 1944. Started with McDonnell in 1946, stayed until 1986. By 1969 he was DIrector of Aircraft Design Engineering, Then Director of Advanced Fighter/Attack Systems from 1974-1984. After that, they sent him to Phoenix as Director of LHX Engineering when McDonnell bought Hughes Helicopter.

Helicopters were his first love, and he missed being able to tinker around with that stuff himself. Here he is in 1952 (I think) in the XH-20 "Little Henry" (his middle name), an experimental helicopter with little ram-jet engines on the rotor. What is that jet in the background? My guess would be the Banshee. 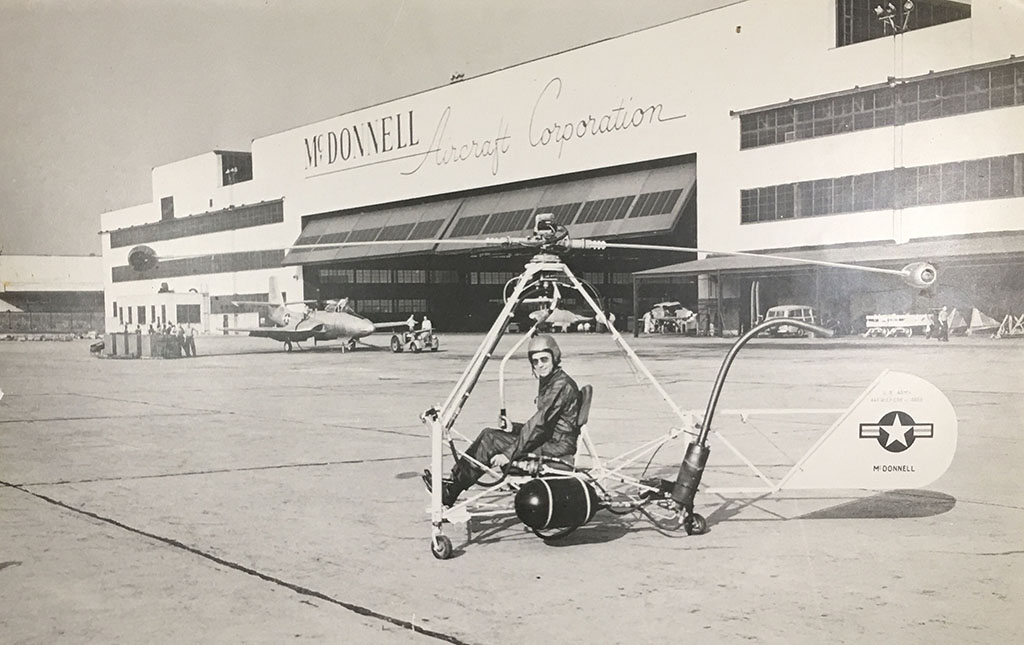 McDonnell developed several helicopters back then, but never got any contracts. I think that's a prototype below. He ended his career coming back to helicopters when they sent him to Phoenix in 1984. Said they wanted him to stay, but he "firmly believed you shouldn't have a bunch of old farts running the company". LOL manumuskin said:
16,000 ft would almost graze some of the Rockies.I assume aerials are done at greater heigths there? In Alaska 16000 ft would not even cut it in some areas

Al... you need to read that again:

ahh! I thought by mean terrain they meant a tangle of wild roses
Reactions: Boyd

Boyd said:
Helicopters were his first love, and he missed being able to tinker around with that stuff himself. Here he is in 1952 (I think) in the XH-20 "Little Henry" (his middle name), an experimental helicopter with little ram-jet engines on the rotor.
Click to expand...

That is very interesting! Quite a talented man. His son follows in his footsteps.
Reactions: Boyd and RednekF350

Getting back to the actual topic of this thread....

Just uploaded 21new tiles in the area around the Atco Dragway, East to Atsion Road. Gotta say, the new server is very noticeably faster when it comes to file transfer. This tile includes the home on Stokes Road where I lived in the 1990's. 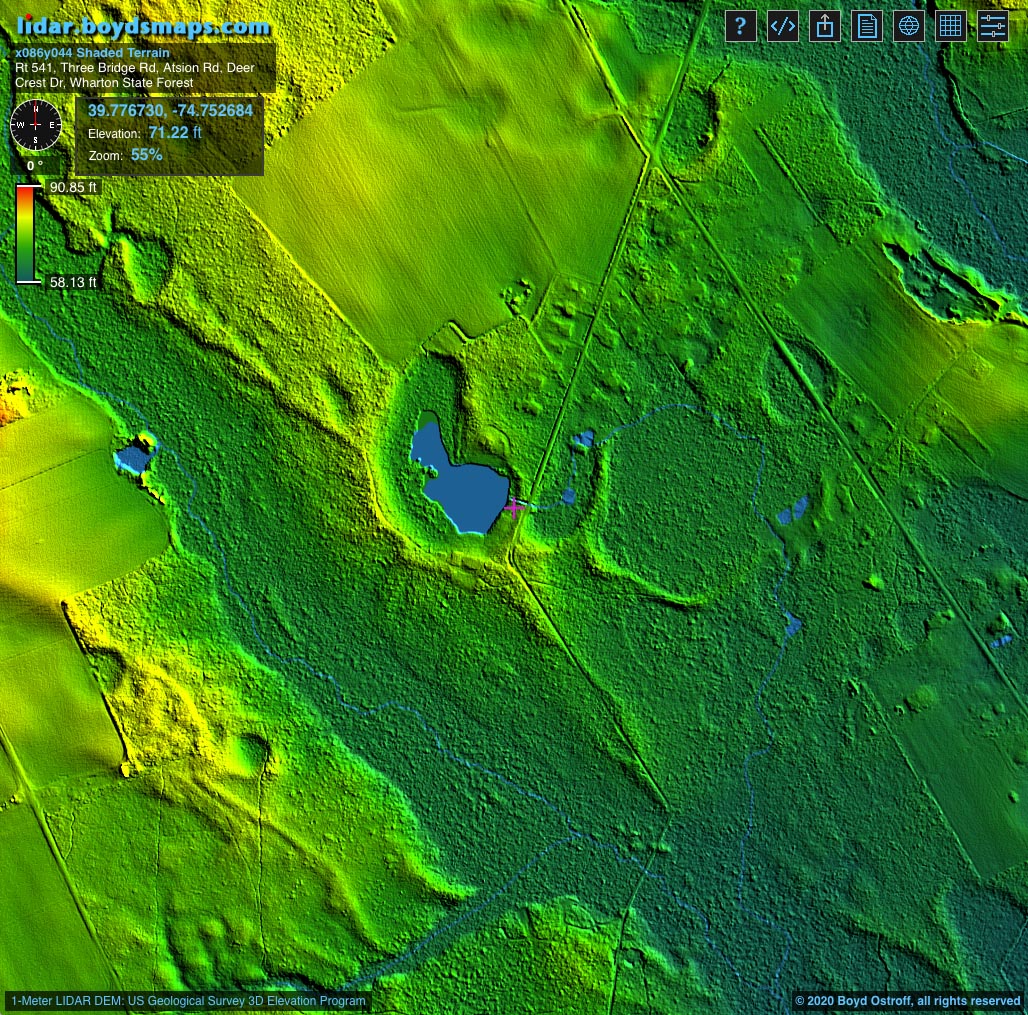 We used to go for walks down Three Bridge Road in the 90's, and somebody lived in a little hideaway here. You couldn't see it from the road because the foliage was so dense. But you could hear the generator running. 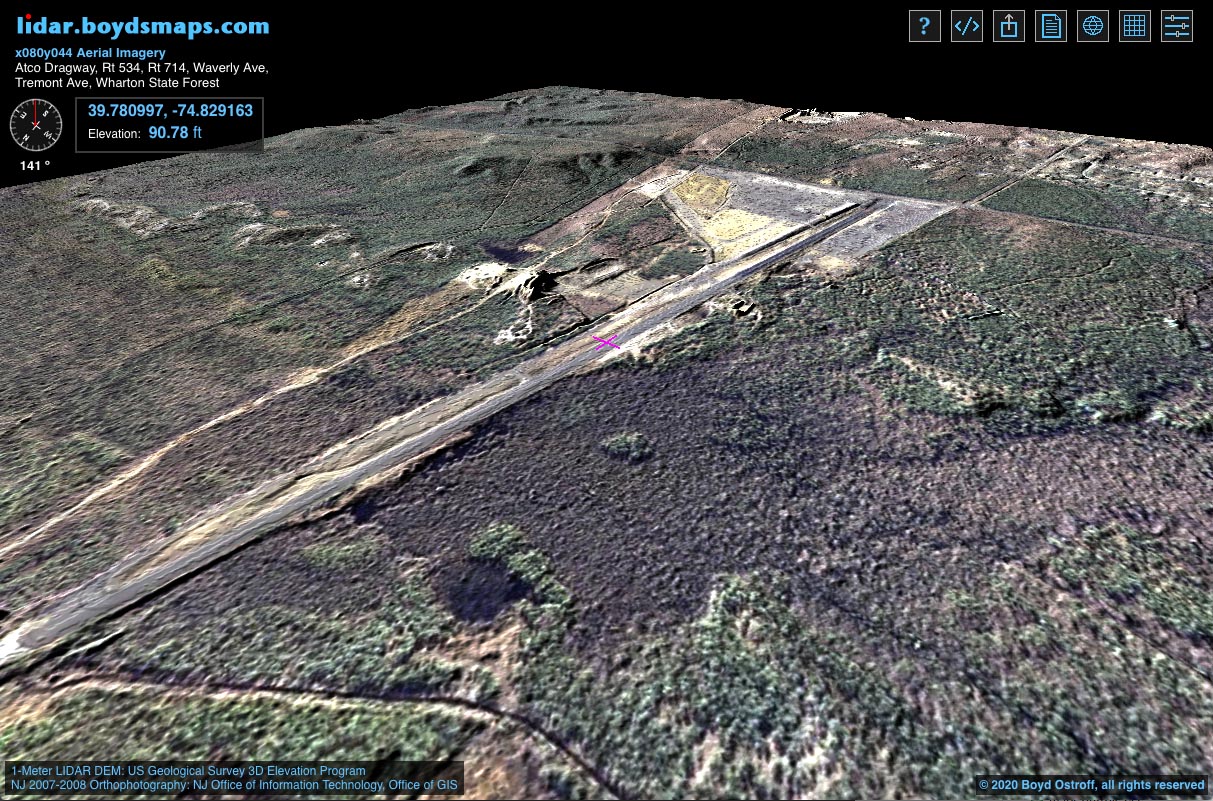 When you visit the site, you'll now see a new basemap that is initially centered on "Devious" in Wharton (which is close to the center of the current coverage area).

This new map is 4x larger than the old basemap, so you may notice that it loads more slowly. But I needed to expand the coverage, since I had reached the Western boundary of the original map. Now, this only affects the low-resolution map that you use to pick the actual LIDAR maps. But it gives me a "bigger canvas to paint on" as I make more LIDAR maps. The new basemap covers the whole Southern New Jersey region. Like most of my projects, this one took substantially longer than I expected, but it was worth the time to get it right. 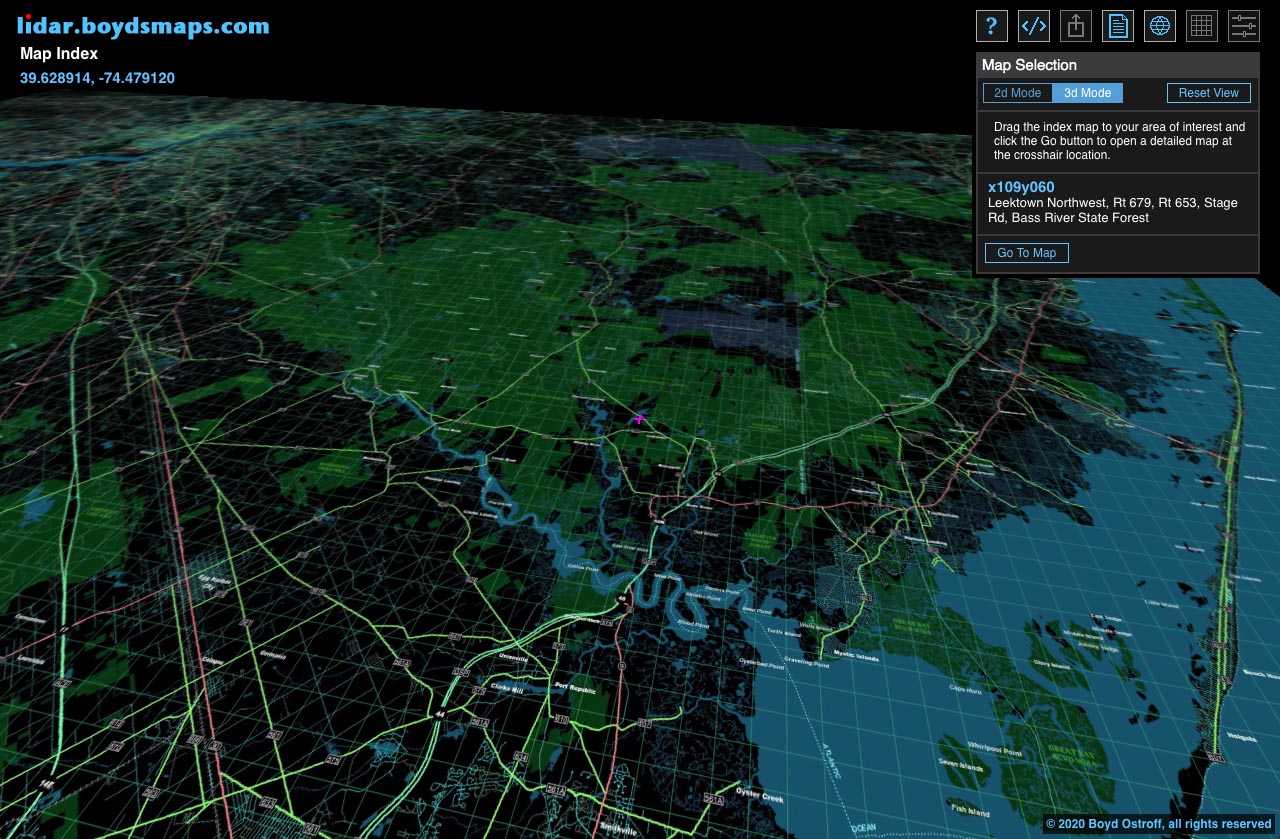 Let me know if you have any problems. If the map doesn't load, you might need to clear your browser's cache. For instructions, do a Google search such as

Do NOT delete cookies or clear website data, this would erase your favorites from online.boydsmaps.com. Just clear the cache.
Last edited: Apr 25, 2020
Reactions: Menantico

Spent some time getting my files organized, went to the USGS site and downloaded a few missing pieces. This is all the South Jersey 1-meter LIDAR data that the USGS has available.

And this is how much I have processed and put online. So many maps, so little time. It appears to be all dug up. What is the history of this place? I remember walking there many years ago and there wasn't much to see. Did not go to the summit, it is private (note the jigsaw puzzle of property lines above). 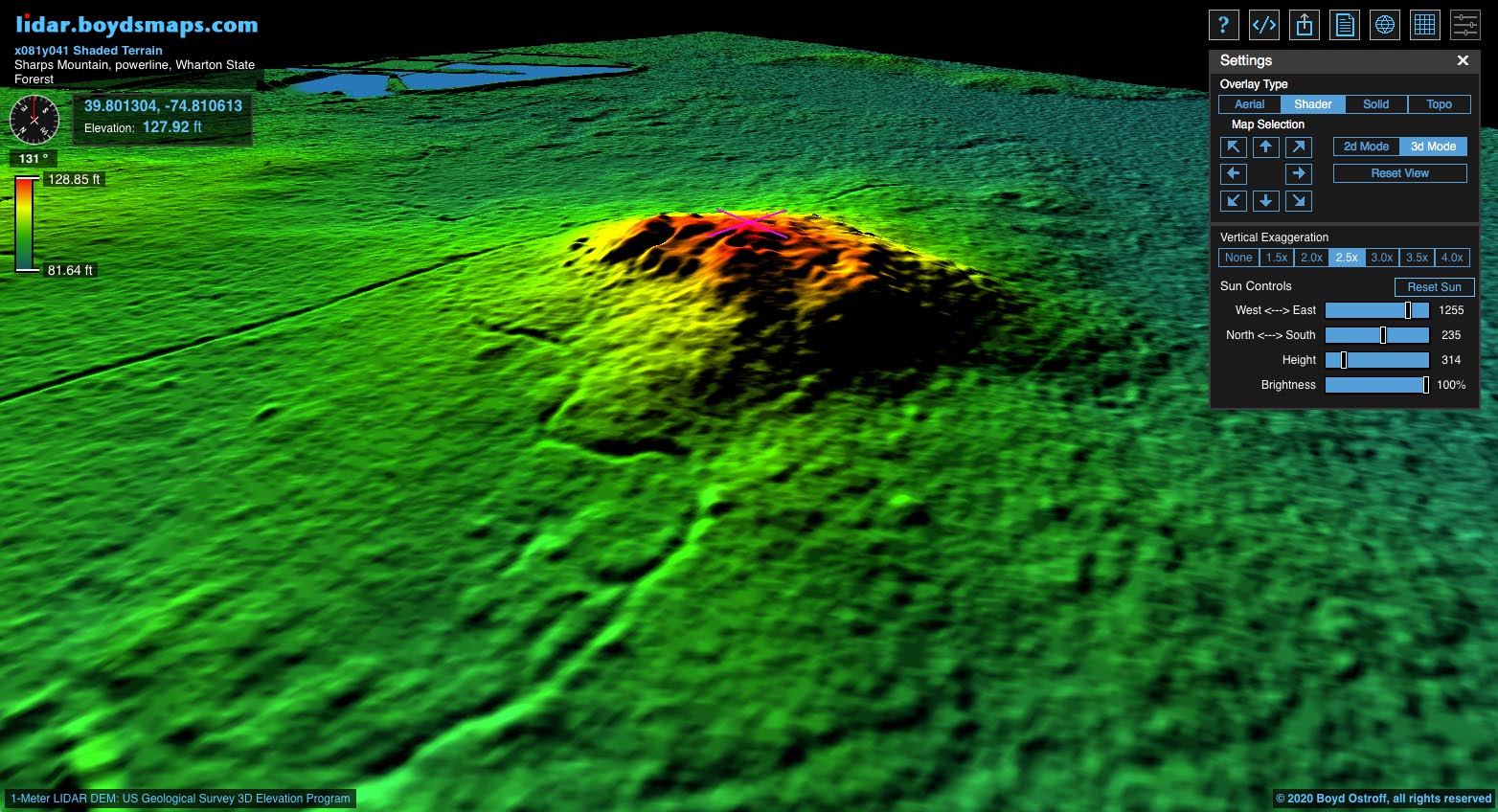 Here's a view of Dellette, looking up Atsion Road 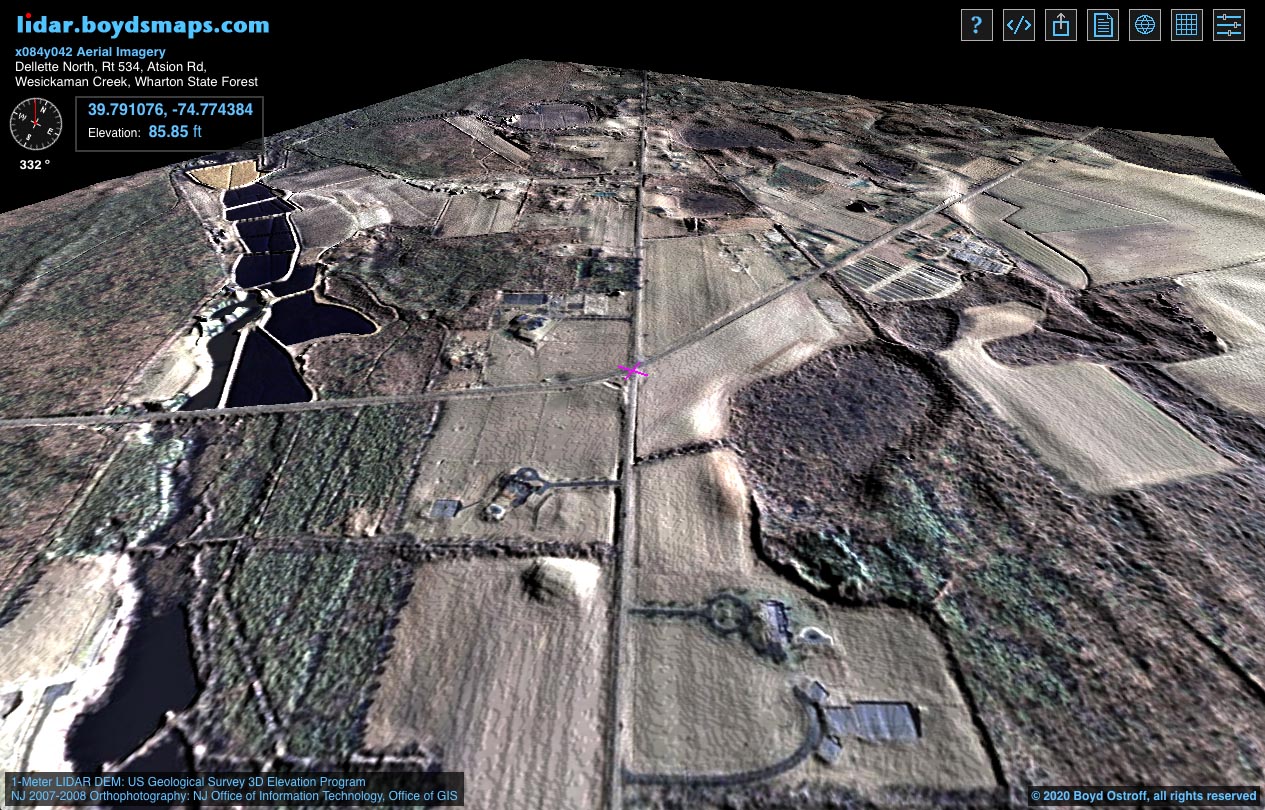 Then there's Hayland Hill, which is a bit of a mystery. I have included this feature on all my maps, but not quite sure where I originally found the name. It doesn't appear on any USGS maps and is not in the GNIS (Geographic Name Information System) or NJ placename database. 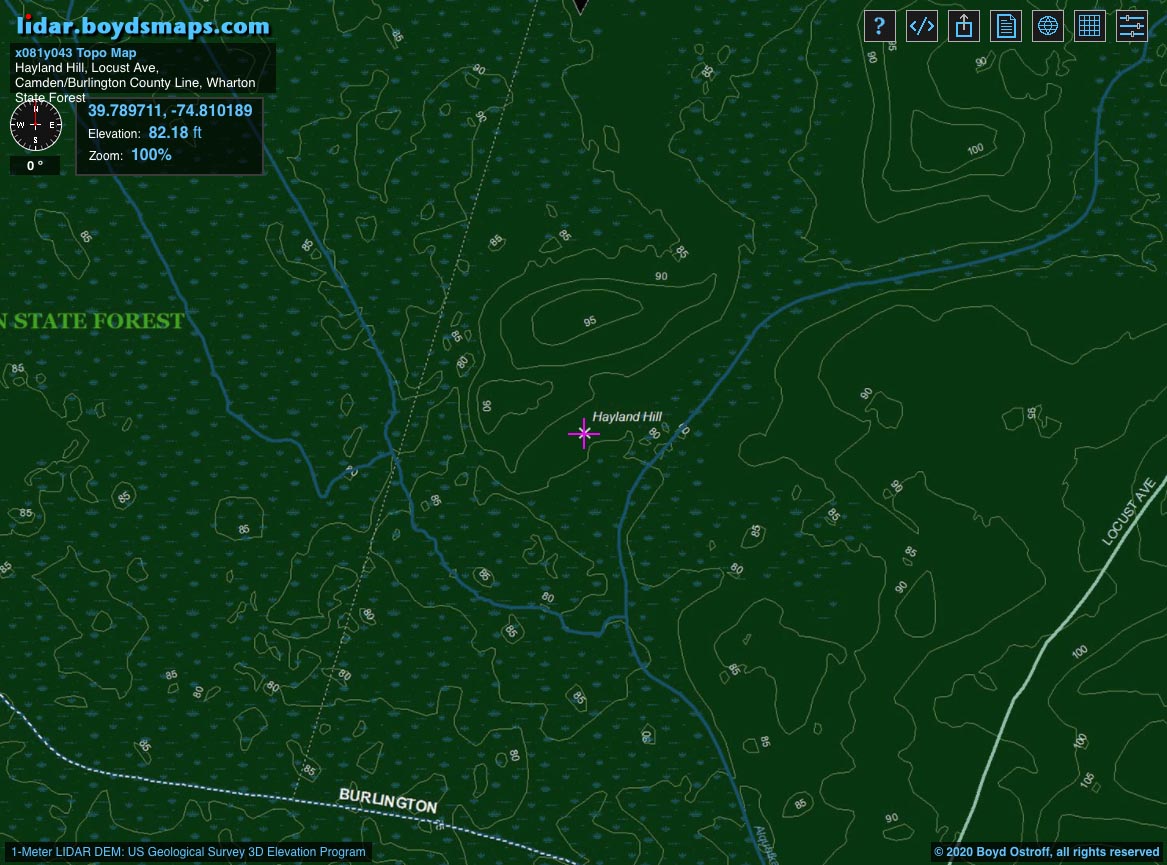 The "summit" is shown on the USGS 24k topo (Medford Lakes Quadrangle). But if you look at the other historic topo's, there's nothing. And there is certainly no "hill" there today. Is this something that was excavated out of existence? Or just a figment of my own imagination?... 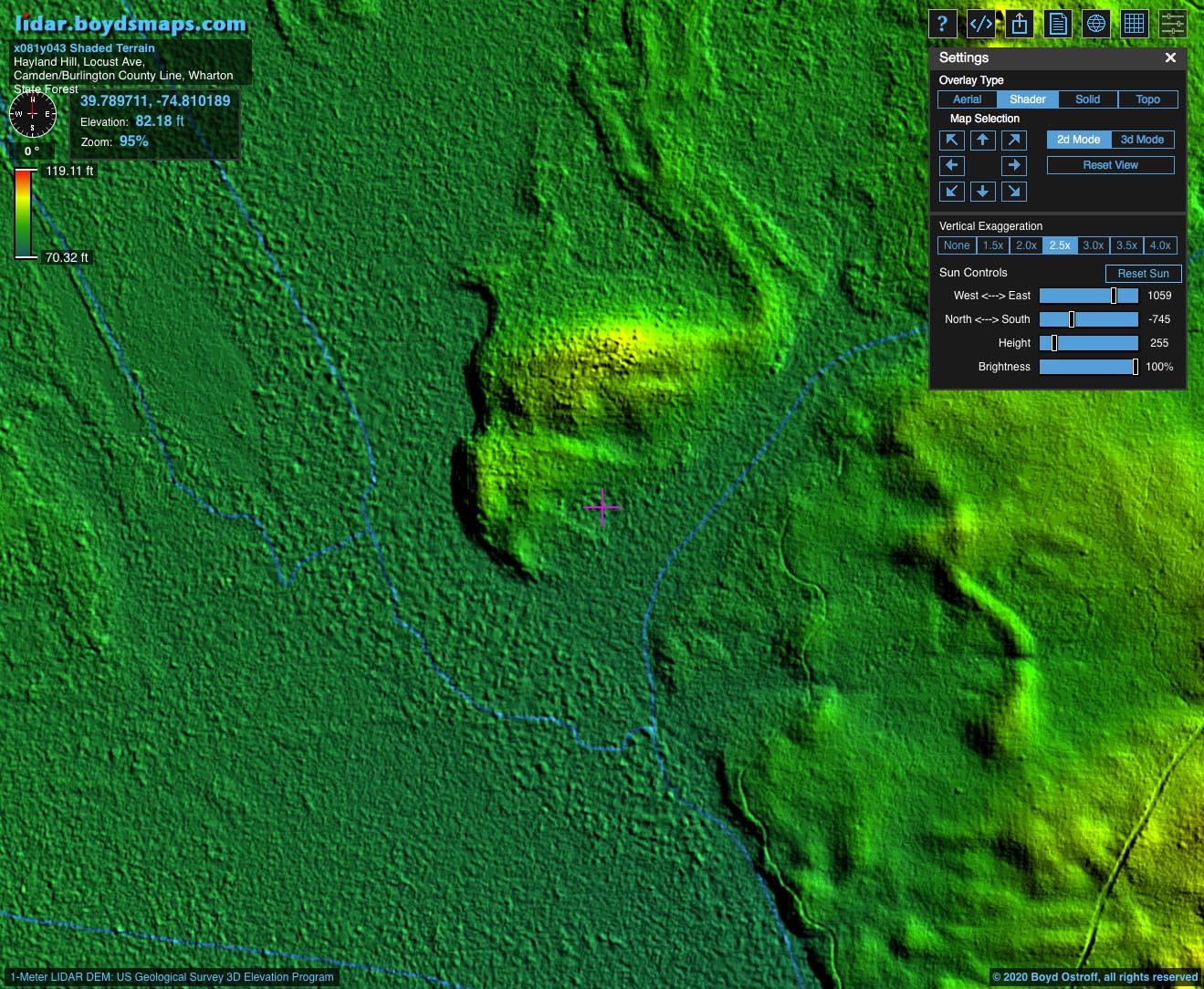 I've never been there, but I'm guessing Sharp's mountain, like other hills throughout the Pines, was excavated for ironstone to use as building material.
Reactions: Boyd

A Google search didn't find anything about Hayland Hill, however there is one mention of it here on NJPB:
https://forums.njpinebarrens.com/threads/the-isaac-haines-stone.10945/#post-133306


Teegate said:
The area is really remote and to get to it we had to cross a cedar swamp and follow an old trail to the upland that the map calls Hay Landing (Hayland Hill).
Click to expand...

So maybe @Teegate can tell us something about this non-existent hill?

There is no hill there that I remember but a large flat property Stone on Shamong twp border. Nice high piney woods but I don't remember a hill there.Guy was with me,he may remember more. Nice hill here though and red brick scattered around?? https://online.boydsmaps.com/#16/39.7972/-74.8162/njgin2015i
Last edited: May 4, 2020
Reactions: Boyd

manumuskin said:
Nice high piney woods but I don't remember a hill there.
Click to expand...

But, in fact, that doesn't exist anymore, as you can see on the LIDAR imagery. So I'm wondering... what happened to the hill?

Guess it's like other small hills in the pines that have been completely excavated out of existence.
Reactions: manumuskin

I solved one mystery, looked through all my old files and no mention of Hayland Hill in any USGS, Census Bureau or NJDEP dataset. Was really starting to wonder where I got that name... and then I found a file named "guys_poi", and there it was.

Thanks to Ben's help, the first beta version of my Map of the Pines is now ready for download. Merry Christmas everyone! :dance: I'll use this thread to provide instructions and help. But please remember this is BETA, and it's free, so I make no guarantees or promises... use at your own risk...

Unfortunately, that still doesn't answer the question of "what happened to the hill"... unless the location of that point is just wrong... if you go about 500 feet north, there's a hill.