Just think, if you were walking around when they lidar-scanned an area, the beam would go right through you, hit the ground, and be reflected back up through you again.

But I suppose that's nothing, compared to all the cellphone, wifi and other electromagnetic radiation that passes through our bodies all the time. It is food for thought however....
Reactions: manumuskin

Cranking out map tiles again! I had reached the limit of my topo dataset and had to spend awhile building a larger, regional map that will meet future needs. This new batch of 20 tiles covers the approximate area from Maple Island, East to Atsion Lake. 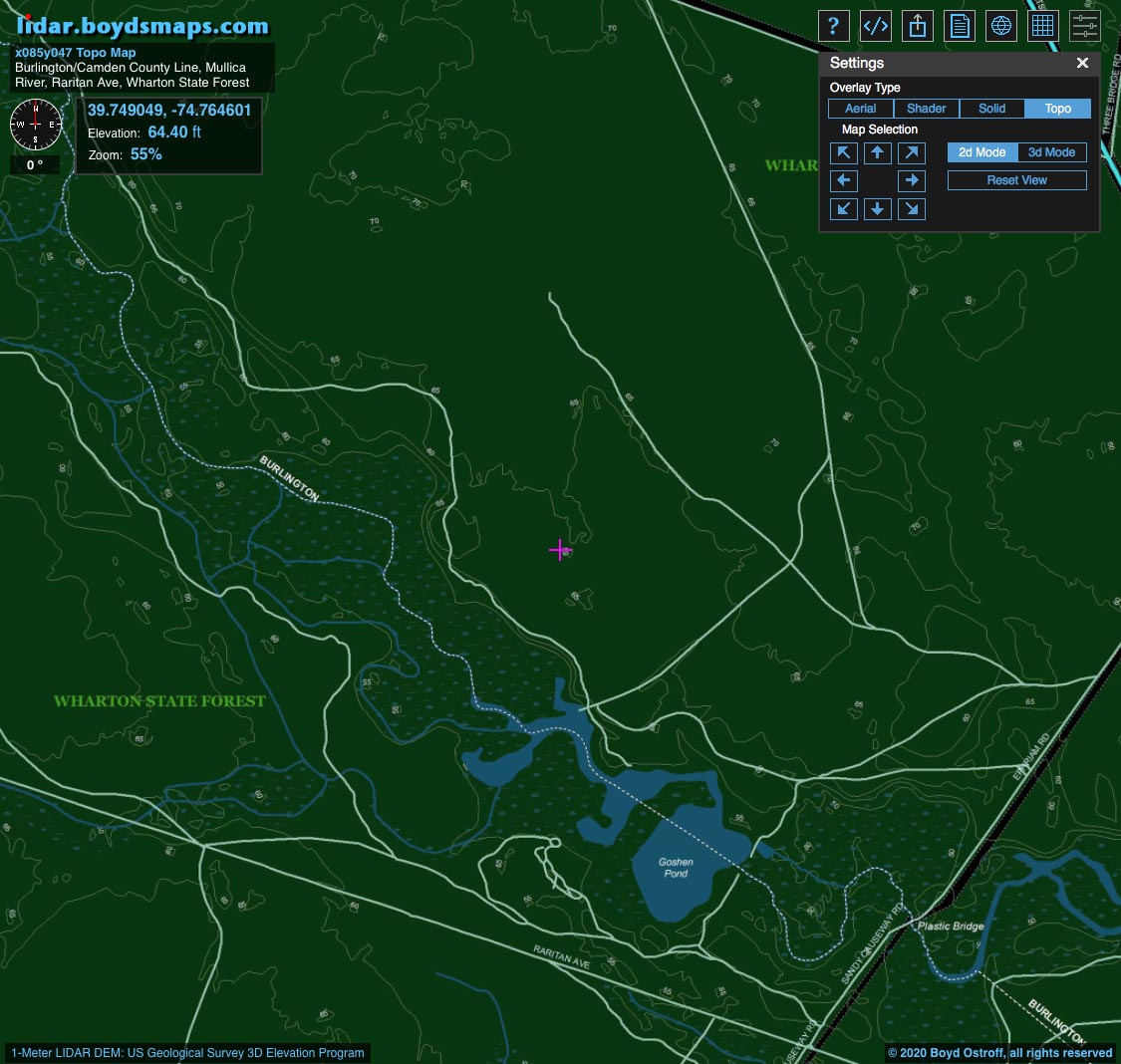 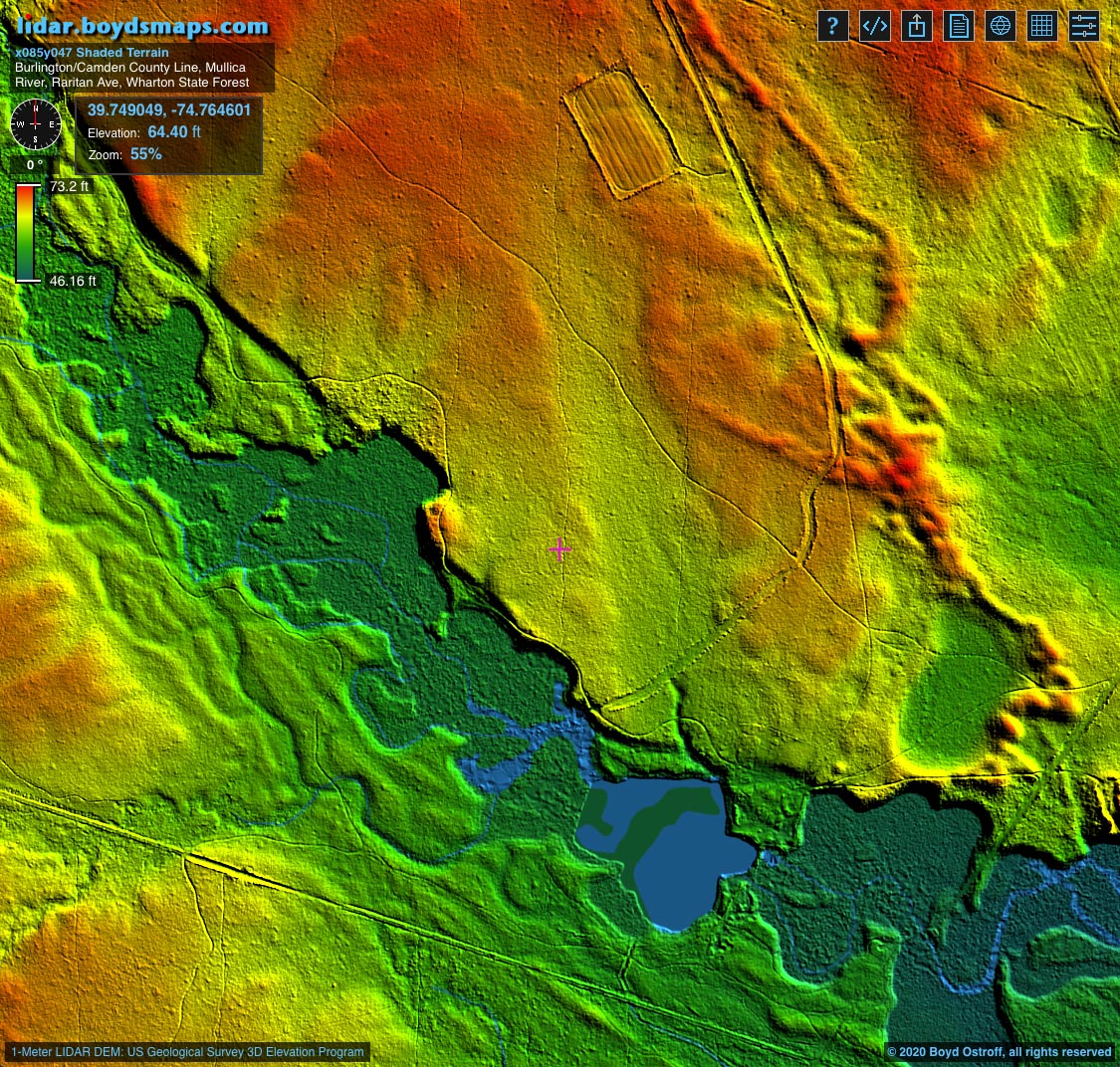 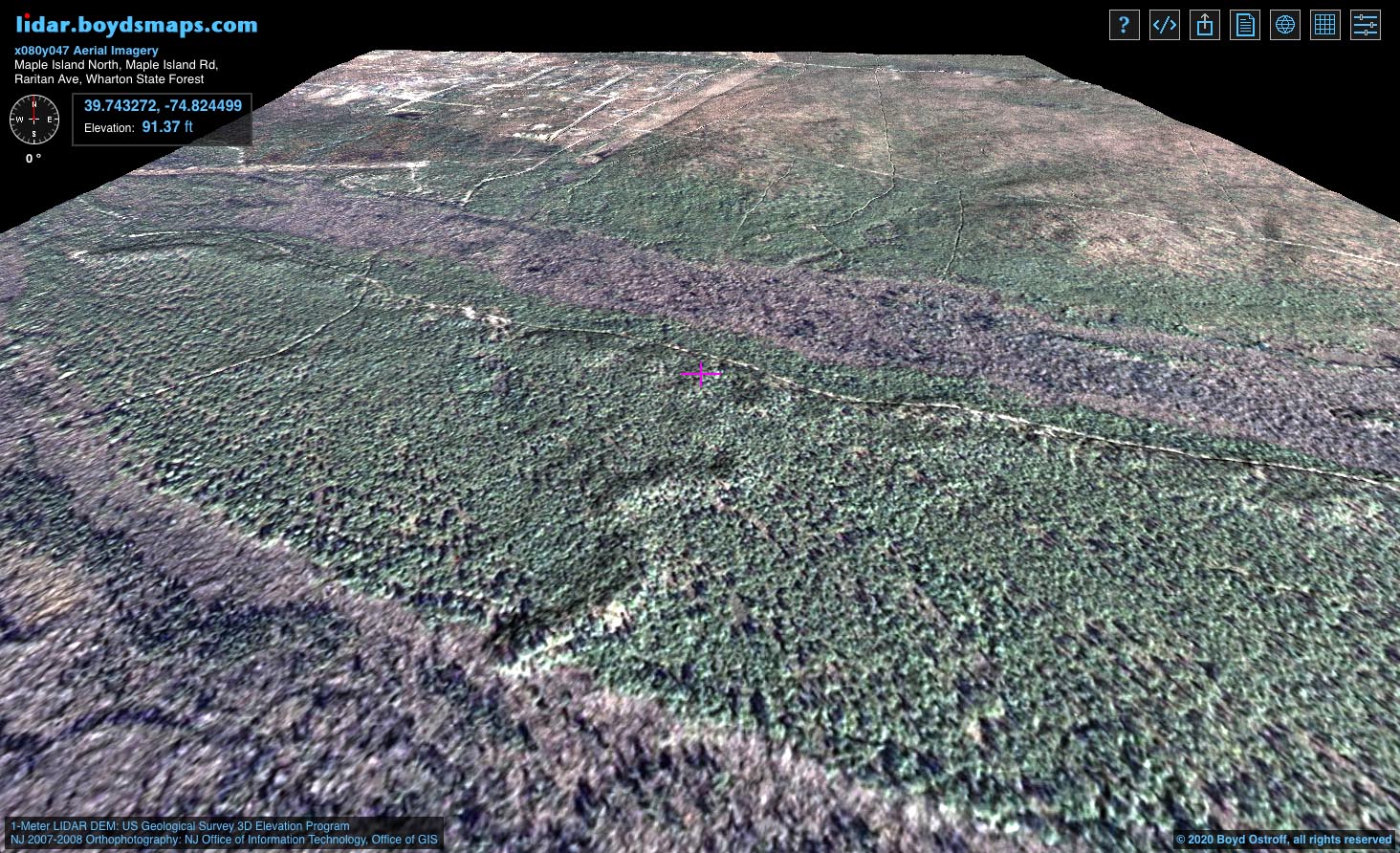 Just added 19 new tiles. This completes the Southern part of the map - for now - here's the updated coverage. The "notch" below Atsion is the missing Atlantic County data. I went on the USGS website, and unfortunately they still don't have any 1-meter LIDAR for either Atlantic or Ocean Counties. Considering current events, I'd be surprised if we get that anytime soon, but I'll keep checking from time to time. Next, I'll complete the area Northwest of Atsion, then will extend the whole map farther North. 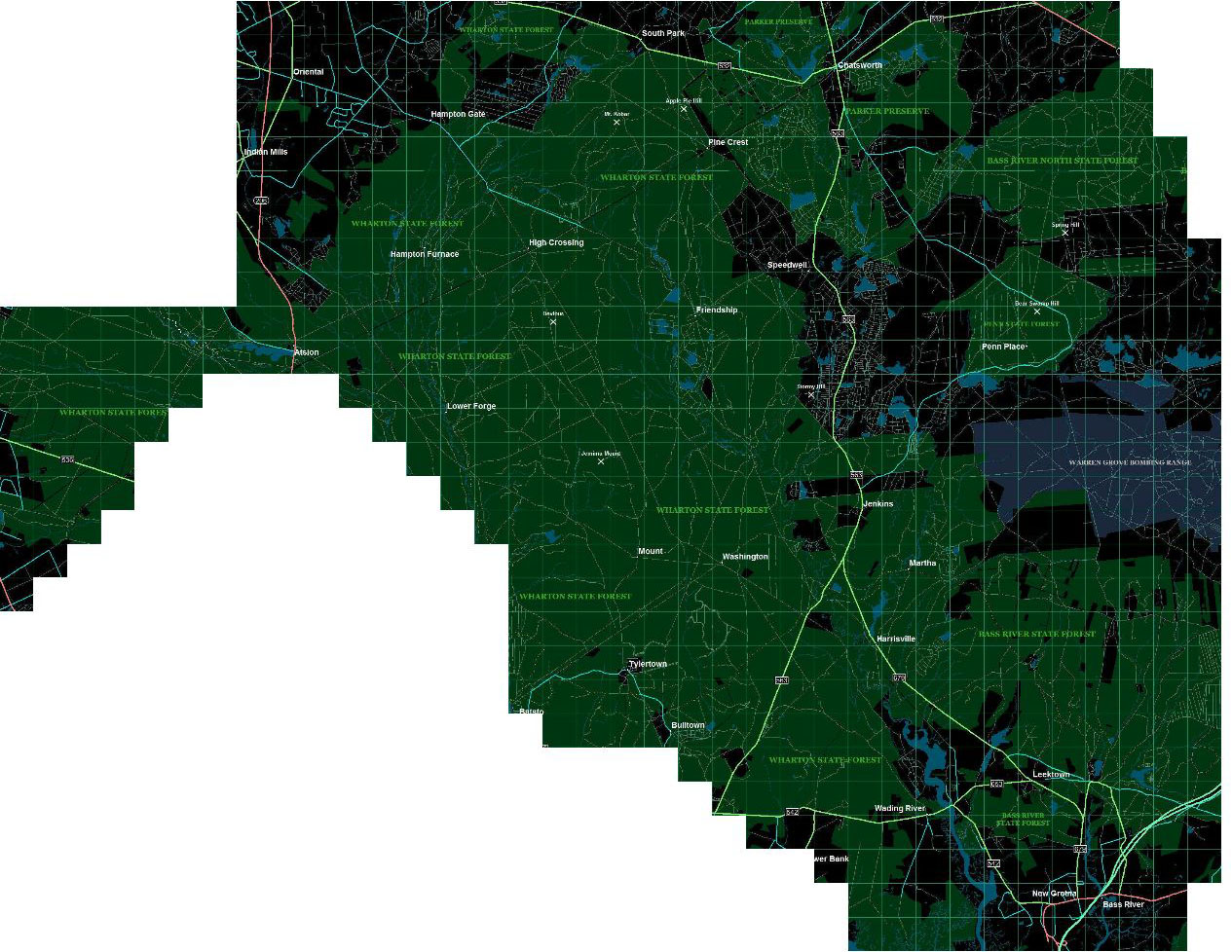 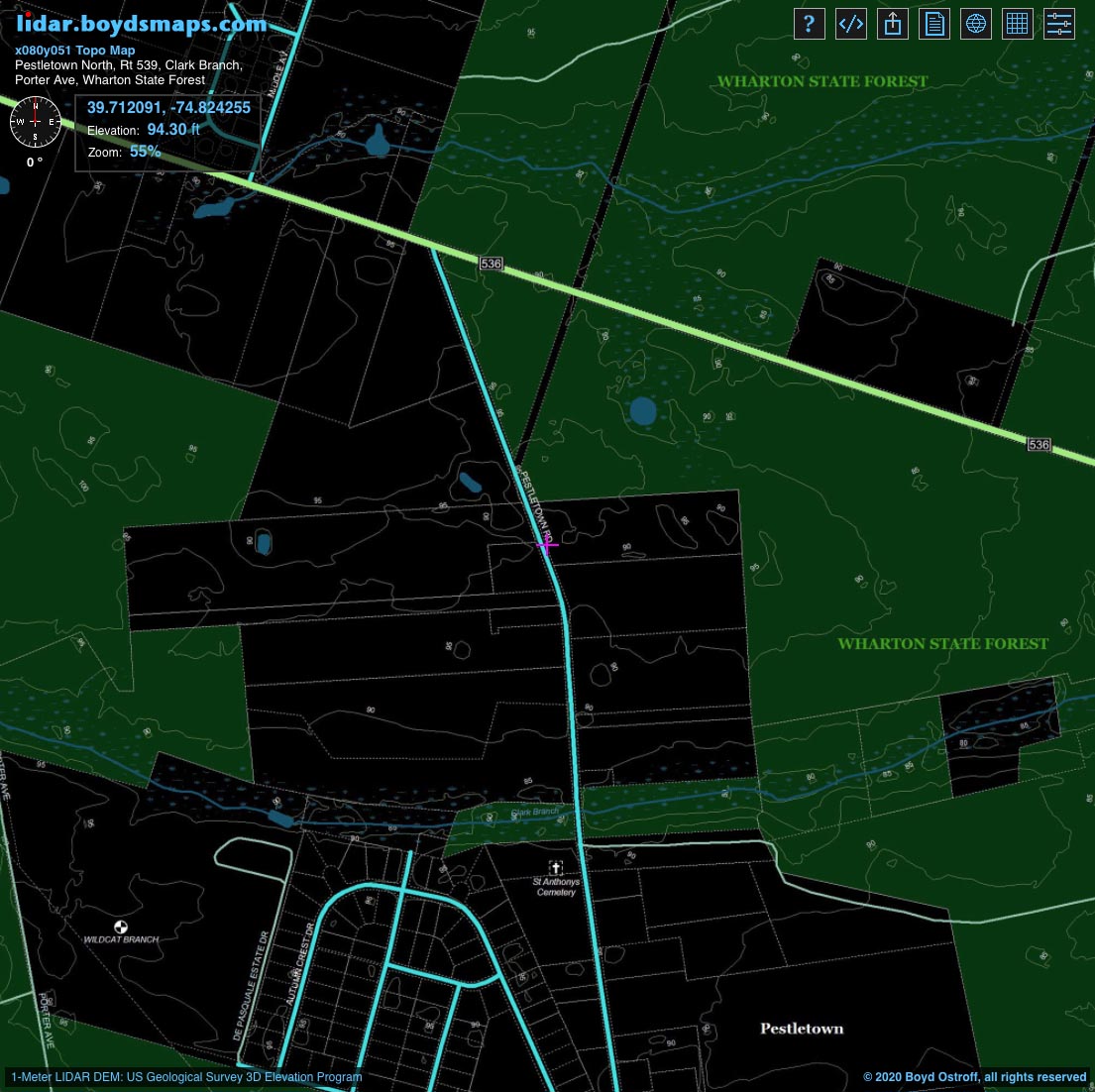 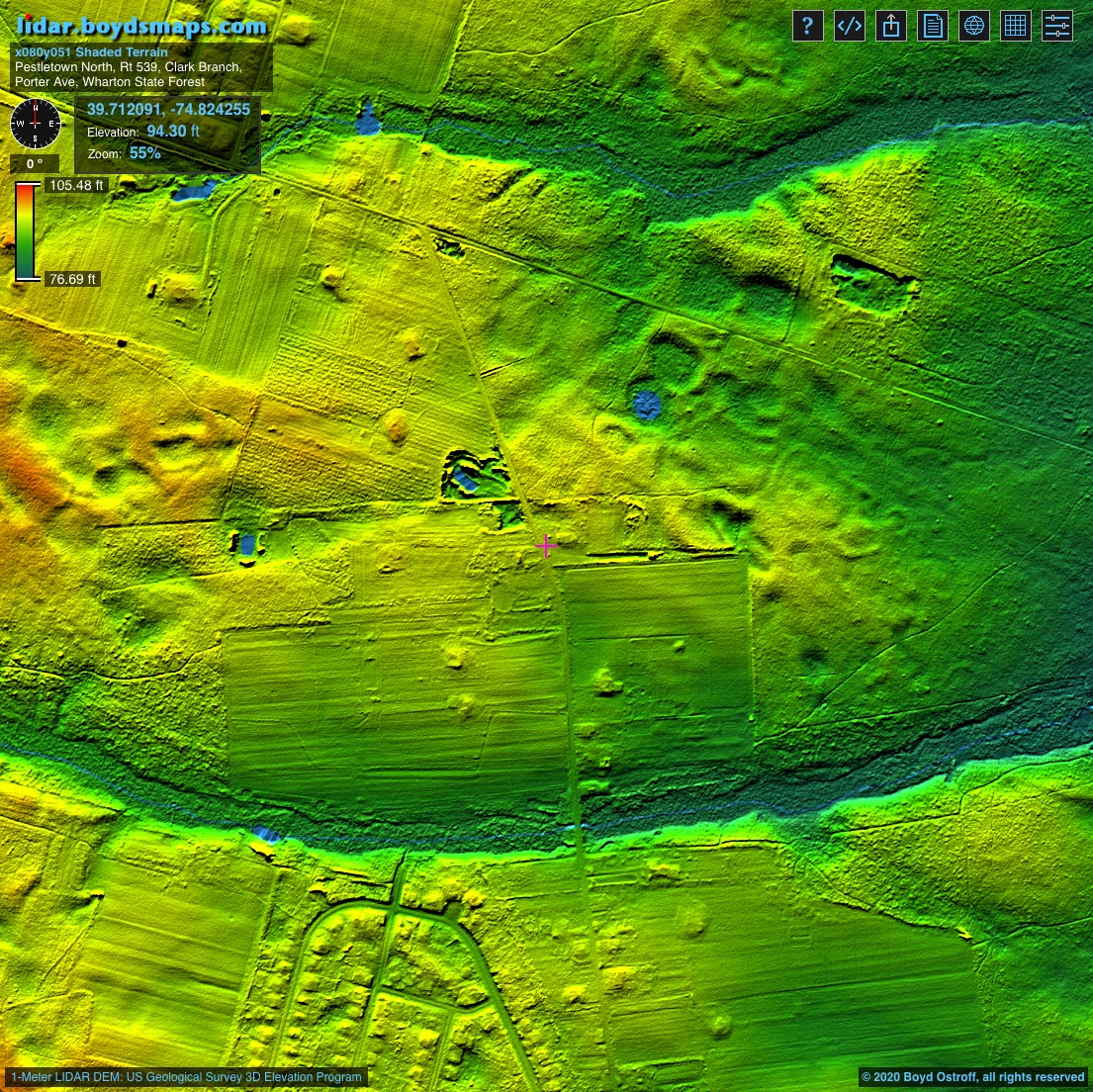 manumuskin said:
Boyd why does the Wading River bridge not show on Lidar?
Click to expand...

There's another nice invisible bridge in the "Elm" map. 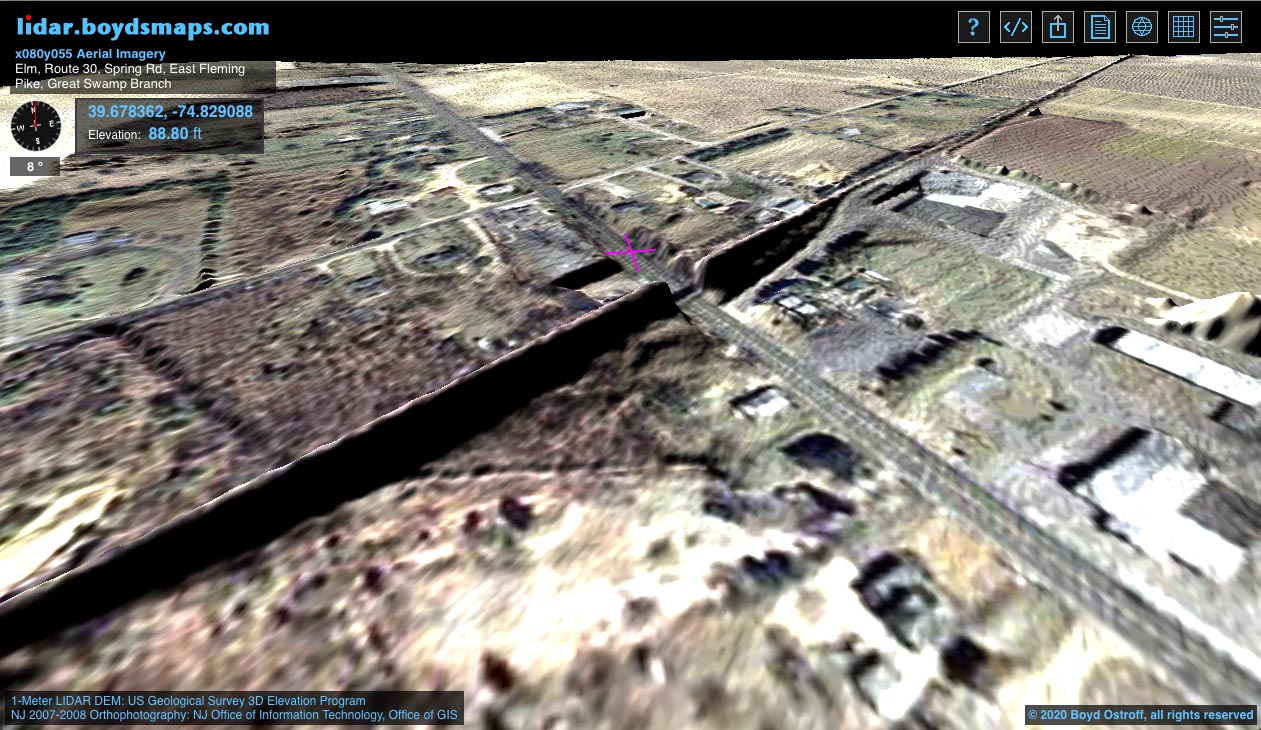 BTW, if you aren't familiar with the new LIDAR site, here's a quick tip. When you go to a link (like the one above), hold down the RIGHT mouse button and drag. Do NOT hold the left button. When you drag with the right button depressed, you will "fly around" ("orbit") the location marked by the crosshairs. This helps you understand what objects look like in three dimensions.
Last edited: Mar 30, 2020
Reactions: old jersey girl and manumuskin

Here's a little "bonus", since some people are anxious to see a certain part of Atlantic County.

This shows the full extent of the LIDAR data that is available in the area South of Batsto. I'm disappointed that we don't have Atlantic or Ocean County too, but making partial map tiles that would need to be replaced later just doesn't make sense. Sorry.

If you click these images, you can click the little magnifying glass at the upper right to view them at full resolution. There's also a button there to download a copy at the full 1-meter resolution (which is approximately 2460x1900 pixels). 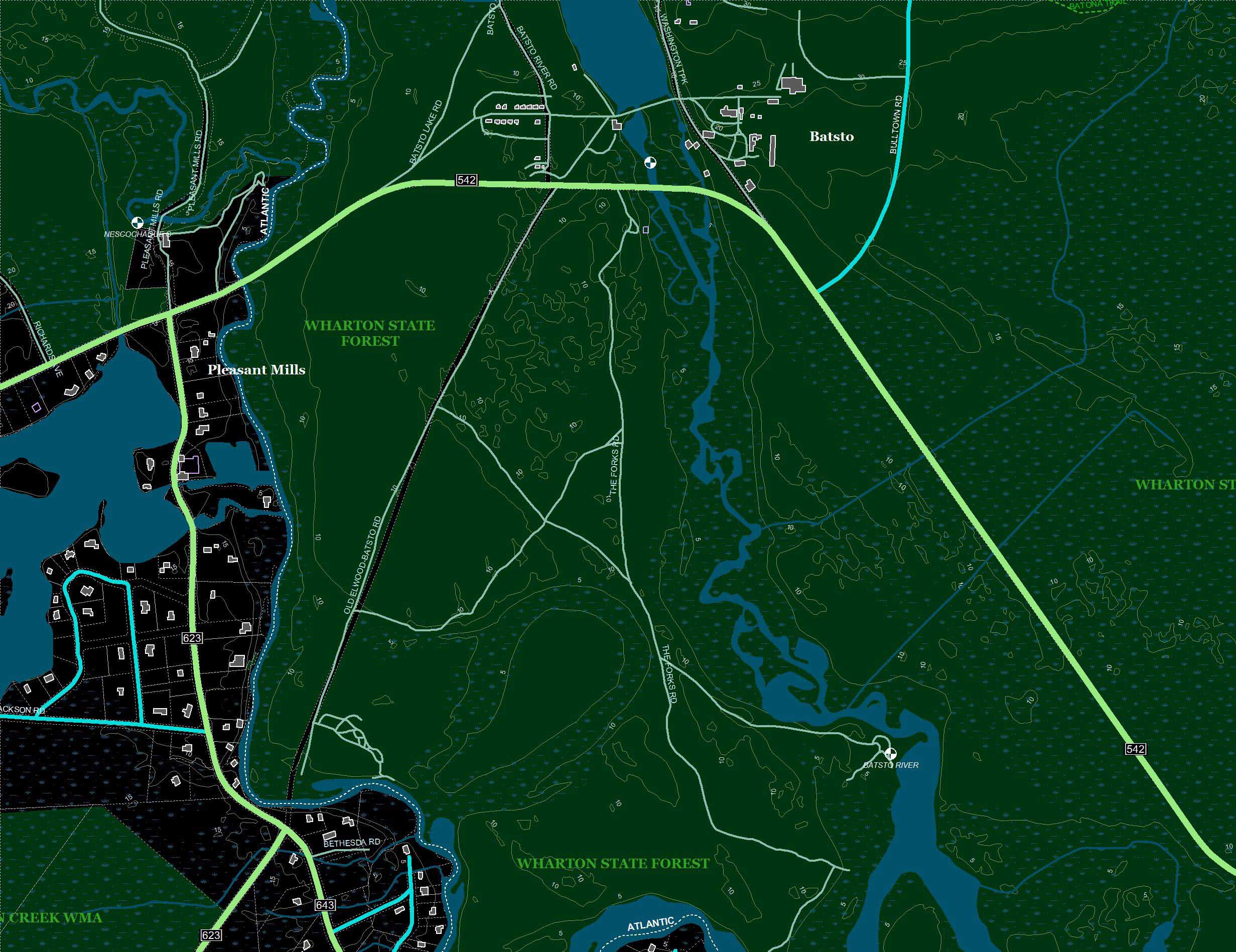 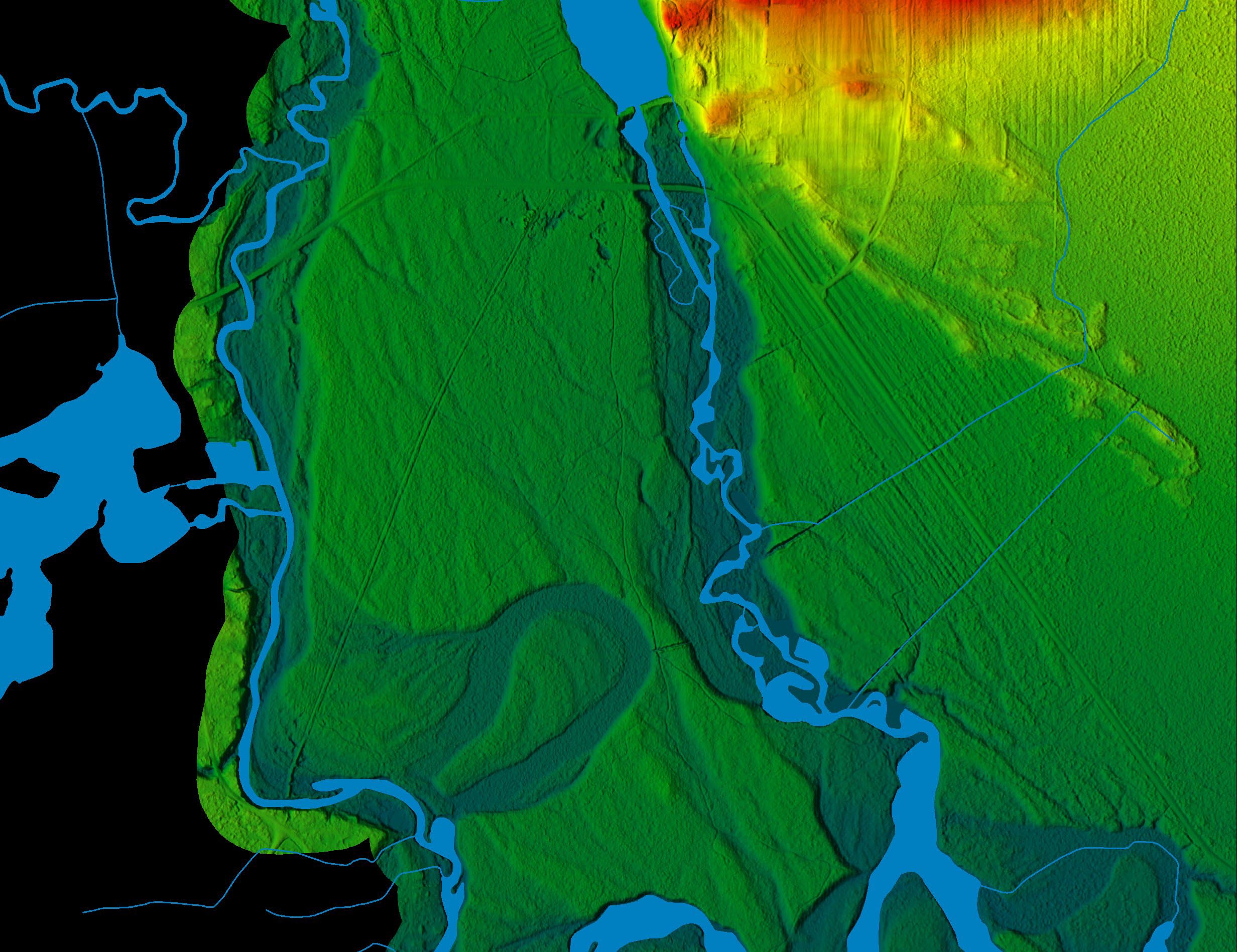 Boyd I haven't had the chance to really look at your LIDAR site till a few days I sat down and figured it out.It's Awesome! Thanks,I know this is taking a lot of time and probably aggravation. Are you planning to come "Down Under" with it or just doing the Core? In any case thanks.It's a great tool for finding things to explore!
Reactions: Boyd

Thanks Al! Of course I want to go "down under". But if you have not followed the discussion, you may not have noticed: there is no 1-meter LIDAR data for Atlantic or Ocean County. The older 3-meter LIDAR is a completely different thing, and I'm not going to use any of that on the new site. So, I will just continue the work on Burlington and Camden Counties.

I really don't know, but given the current situation, I'd be surprised to see any Atlantic or Ocean County data for awhile. I hope the Federal Government is allocating their money and staff to more vital things right now.

What does Cumberland county have?

Sorry Al, this is all I've been able to find so far. Those "swiss cheese" holes in Camden and Gloucester could be something I missed. Don't know for sure, but had a look on the USGS site about a week ago and didn't see anything new. Almost all of it is part of a big "Delaware Valley" LIDAR project.

So far, I have made a total of 667 tiles. There are four maps (elevation, topo, aerial and shader) for each tile, so that's 2668 individual files - each one is "hand made". It'll be a long time before I get out of Burlington and Camden Counties. 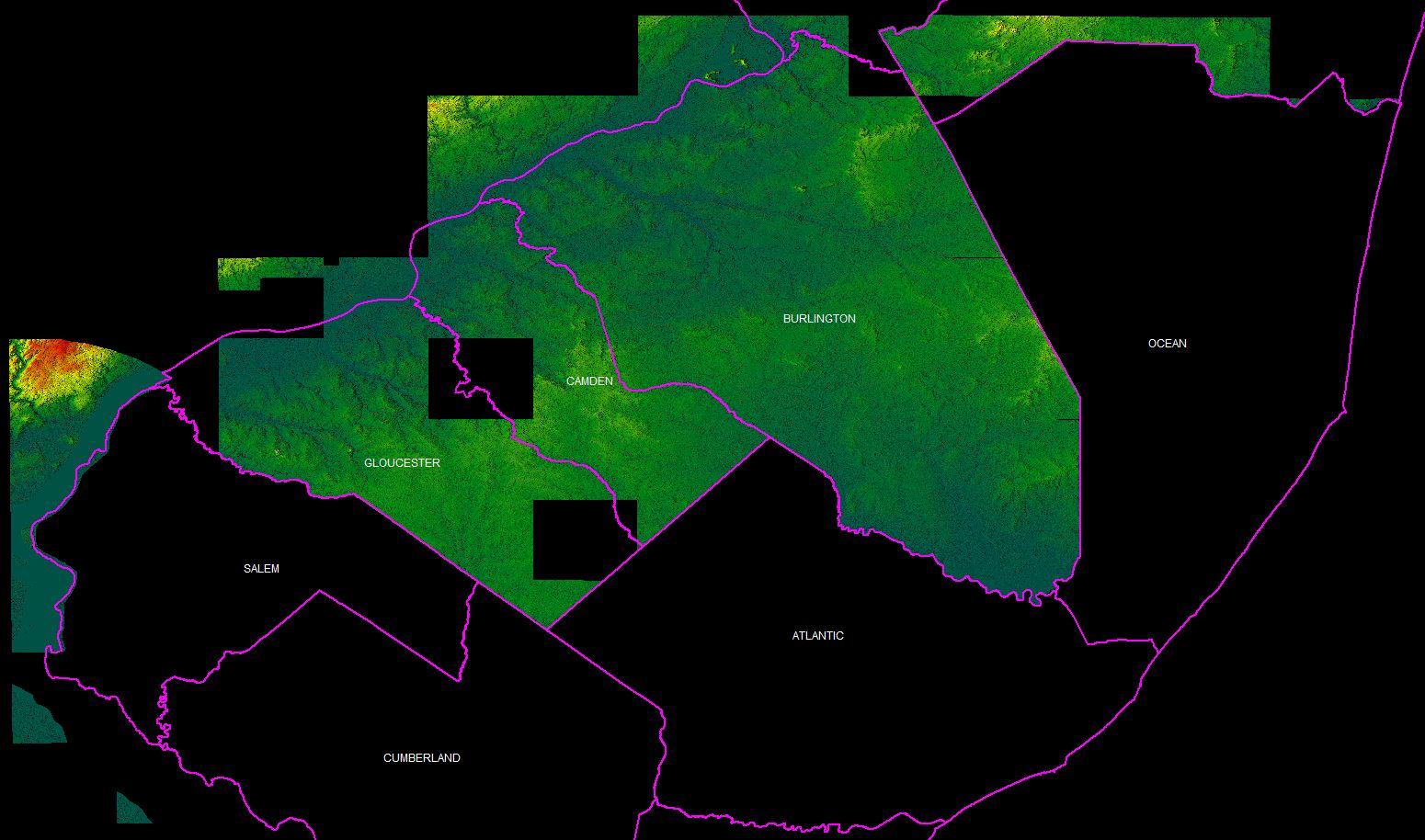 I"m sure they'll get to us Deep South folk eventually. Have you heard any news about any planned updates of the NJGIN aerials? The 2015's were great,wondering if five years has improved anything?

I have not seen any news, was also wondering when the next update will be. Looked at all the different years when I chose the imagery for the LIDAR site. And 2007-2008 is definitely the highest quality in terms of sharpness and definition. The specs are the same for 2012 and 2015 (1 foot per pixel) but each year the quality gets worse. Wonder if that has something to do with choosing the low bidder?

Well, you have to make a distinction there. 2006, 2010, 2013 and 2017 are NAIP imagery - from the US Dept of Agriculture / National Agriculture Imagery Program. They photograph the whole US during the peak of the growing season at a resolution of one meter per pixel to show crops and tree canopy. They call this "leaf-on imagery"

The other years - 2007, 2012 and 2015 are from the State of New Jersey and much higher resolution at one foot per pixel. They are photographed in the winter when the trees are bare - which they call "leaf-off imagery".

manumuskin said:
Have you heard any news about any planned updates of the NJGIN aerials? The 2015's were great,wondering if five years has improved anything?
Click to expand...

Well, it turns out that there is some news here. They just started capturing new imagery. I'm sure it will be awhile before we can access it.... but it's coming!

Note the comment about the early spring. Quantum Spatial is the same company that shot the 2015 imagery.

The project formally kicked off with USGS and Quantum Spatial on 3/27/20. Early leaf out is expected to be a challenge in acquiring the whole state in one year. Our thanks to NJDEP for funding and project support, and also to funding contributors NJ Transit, NJDOT, NJOHSP, NJOIT & NJDMAVA.
Reactions: bobpbx and manumuskin

I assume they shoot the imagery from satellite? or are they still doing it by aircraft?

Absolutely not Al, nothing at NJGIN comes from satellites, it is all shot from airplanes, which is generally superior IMO (unless you want to spy on foreign nuclear test sites).

You can find out all about it by just clicking the map info button on my site. For example

"Aerial imagery was acquired using Microsoft UltraCam Falcon and Eagle large format cameras with a flight design that included a total of 4171 exposures in 51 flight lines. Aerial imagery was supplemented with the simultaneous acquisition of airborne GPS/IMU data, which captured the ground coordinate for the nadir point of each photograph. Aerial imagery was exposed at an altitude of 16,480′ above mean terrain."

Maybe the reason the 2015 aerials are so bad is because they were shot with a Microsoft camera, LOL. The only satellite imagery on my site is from HERE.com, and this is a good example of the problems with using a satellite.

There is an advantage to satellites however. Here's a quick illustration (viewed from the side) which is obviously not to scale. Notice the "cone" that is formed between the camera and the area being photographed. The angle is much wider with the airplane, which is not desirable for making a map because it creates distortion. This is why it's called "orthophotography", which means the image has been "straightened out" to correct for this distortion.

With the satellite, the angle of the cone is much smaller, yielding less distortion. If you imagine a satellite WAY out in space, the sides of the triangle would be almost parallel - which would be ideal, since there'd be no distortion. This would be called "orthographic", from the Greek roots "ortho" for straight and "graph" for line. Maybe some of you took a drafting class long ago (before we used computers)? Technical drawing uses "orthographic projection", meaning that you extend parallel (straight) likes from an object to a flat plane. OK.... enough for today's geometry lesson. There will be a short quiz on Monday. 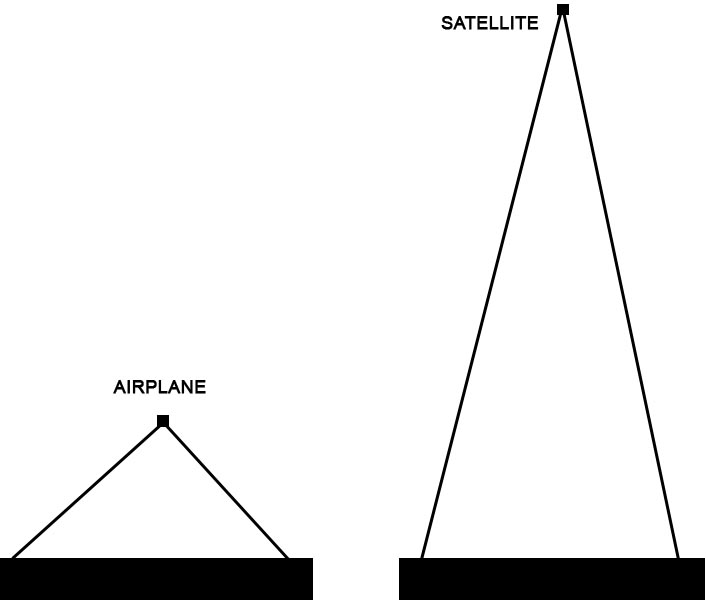 Thanks for that bonus, Boyd! The scroll bars on the interior of that large oxbow are very apparent. I can't wait to see the rest of the Forks area when the lidar becomes available. It may just help solve some mysteries I've been working on.
Reactions: Boyd

I learned blueprint reading and orthographic projection at Lakehurst before they even had us touch the cats and arresting gear. We had to draw our own from an actual item off the equipment. It was a revelation to me at the time. Later when I became a mechanical inspector it was crucial. More than once I had to turn a first article down because the drawing was either wrongly drafted (rare with engineers) or a hidden line was missed (common with new machinists).
Reactions: Boyd
You must log in or register to reply here.
Share:
Facebook Twitter Reddit Pinterest Tumblr Email Share Link
Top